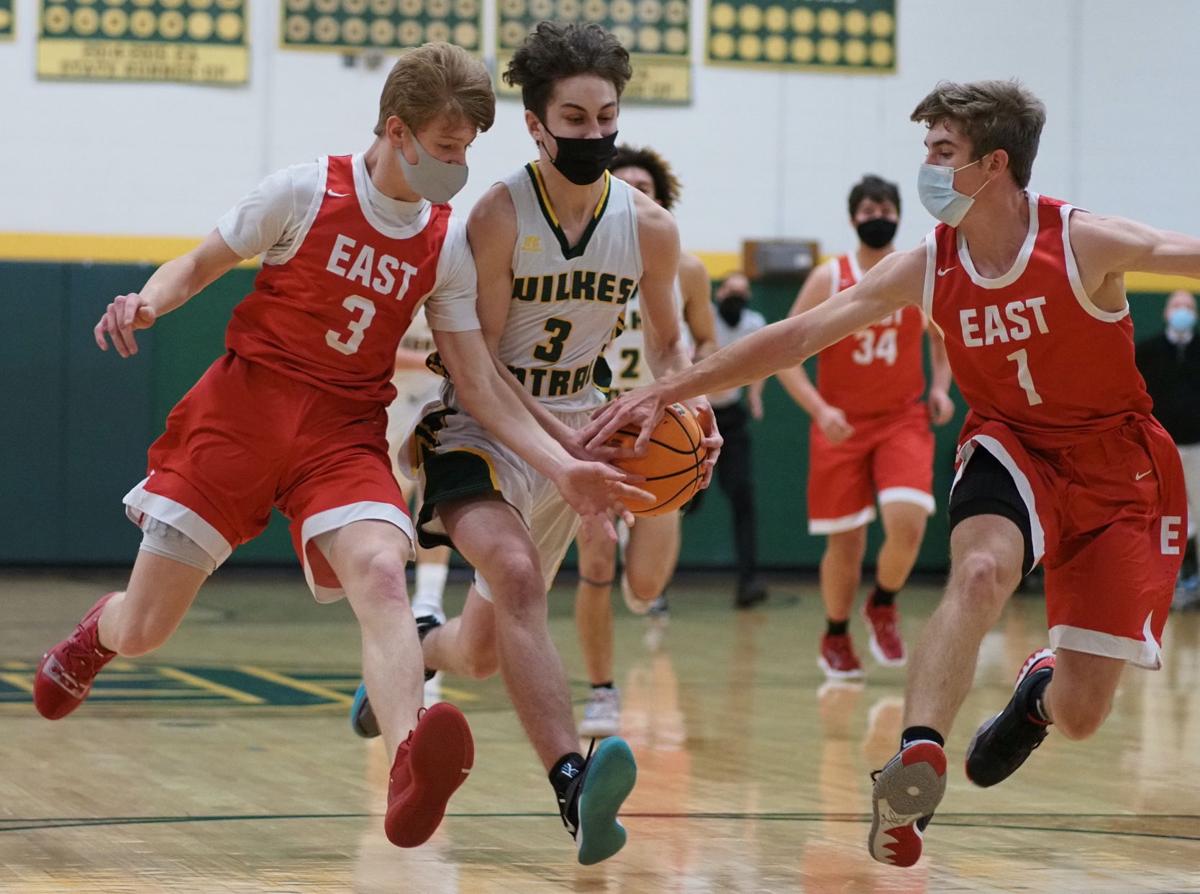 Wilkes Central’s Zach Mastin’s path to the basket is contested by East Wilkes’ Bryson Sidden (3) and Dylan Ward. Mastin and the Eagles edged the Cardinals in Moravian Falls, 67-64. 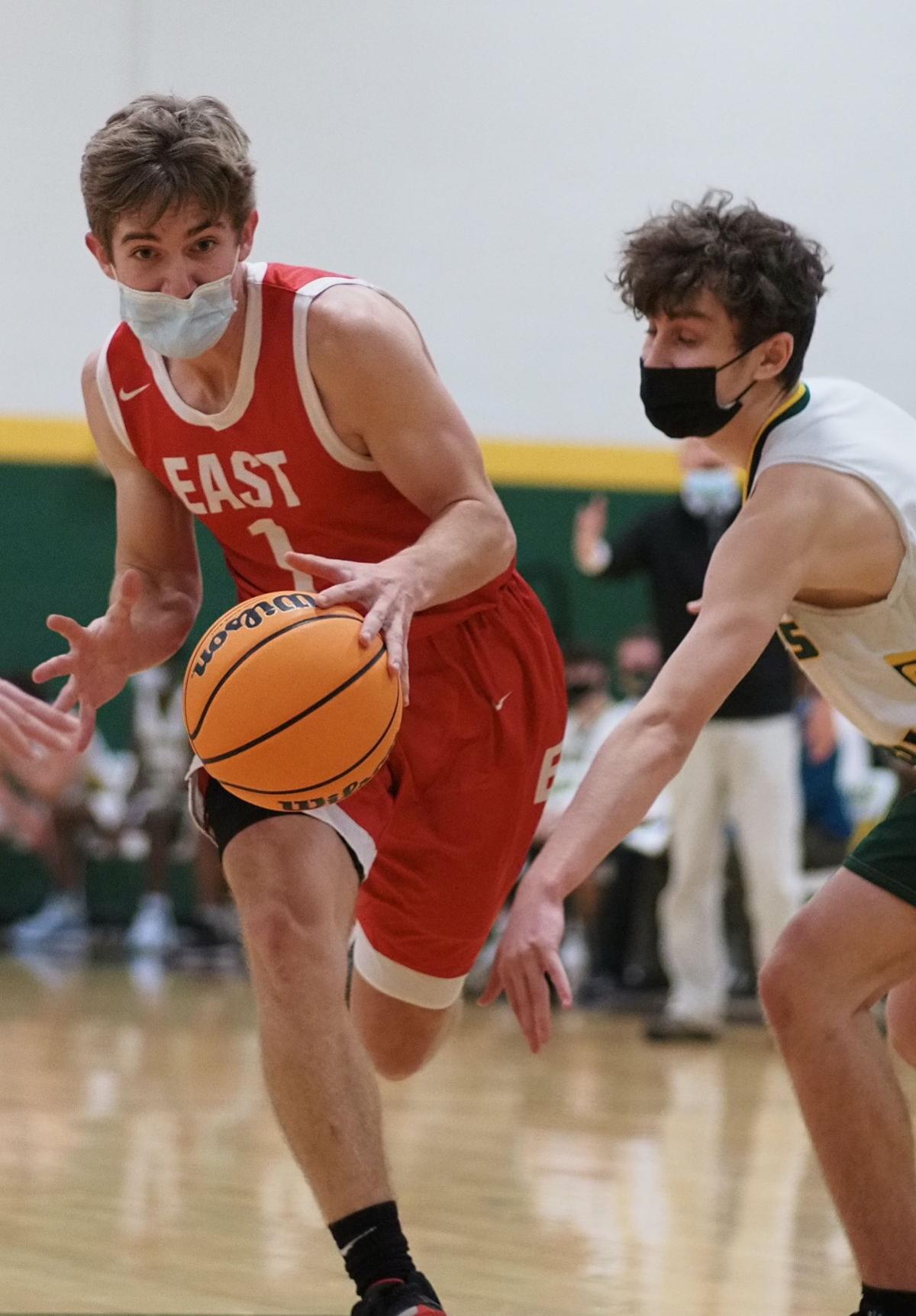 East Wilkes’ Dylan Ward, here driving by Wilkes Central’s Zach Mastin, had 13 points in the Cardinals’ 67-64 loss to the Eagles on Thursday. 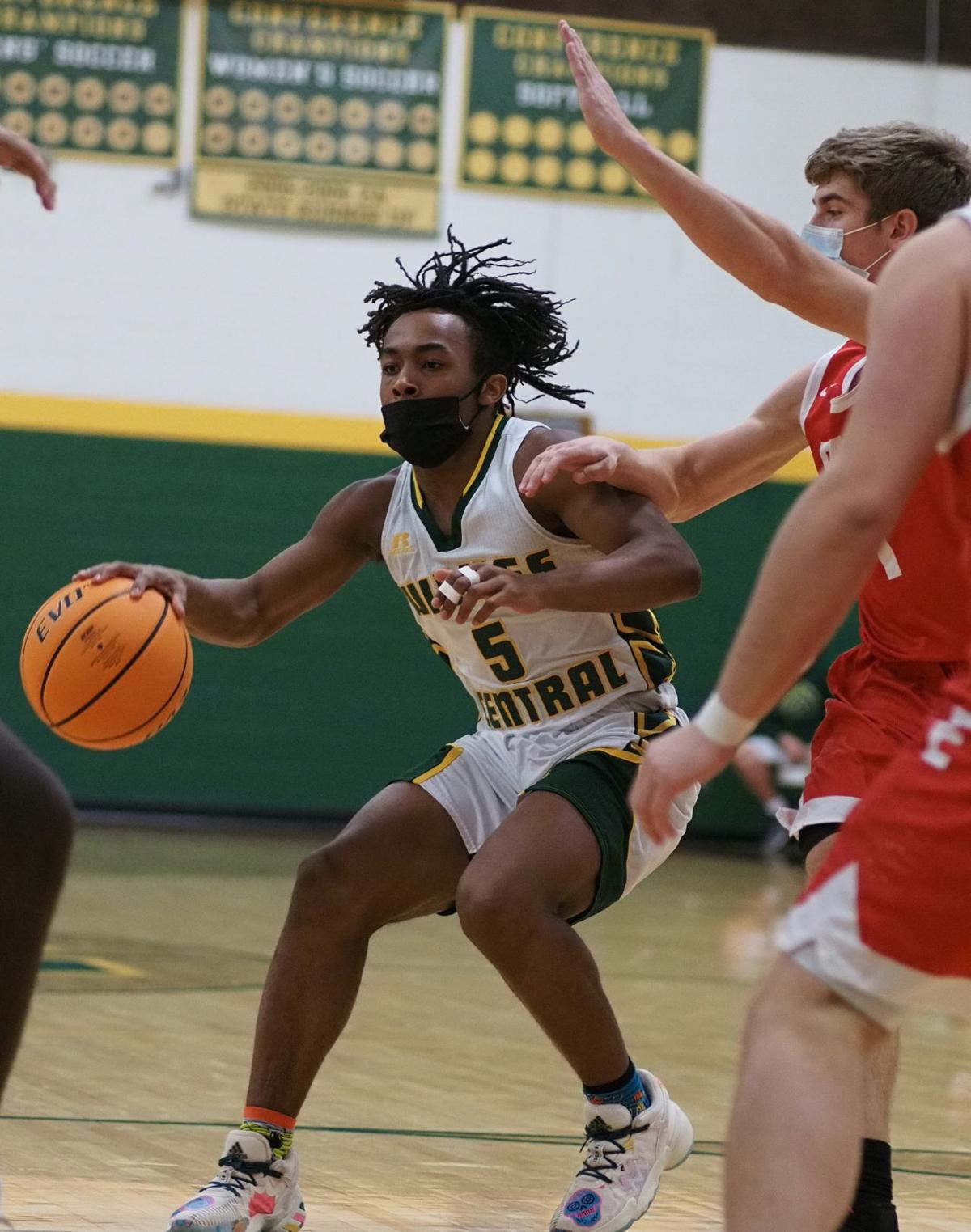 Sophomore point guard Anthony Graham scored 13 of his team-high 15 points in the second half of a 67-64 win over East Wilkes in Moravian Falls on Thursday. 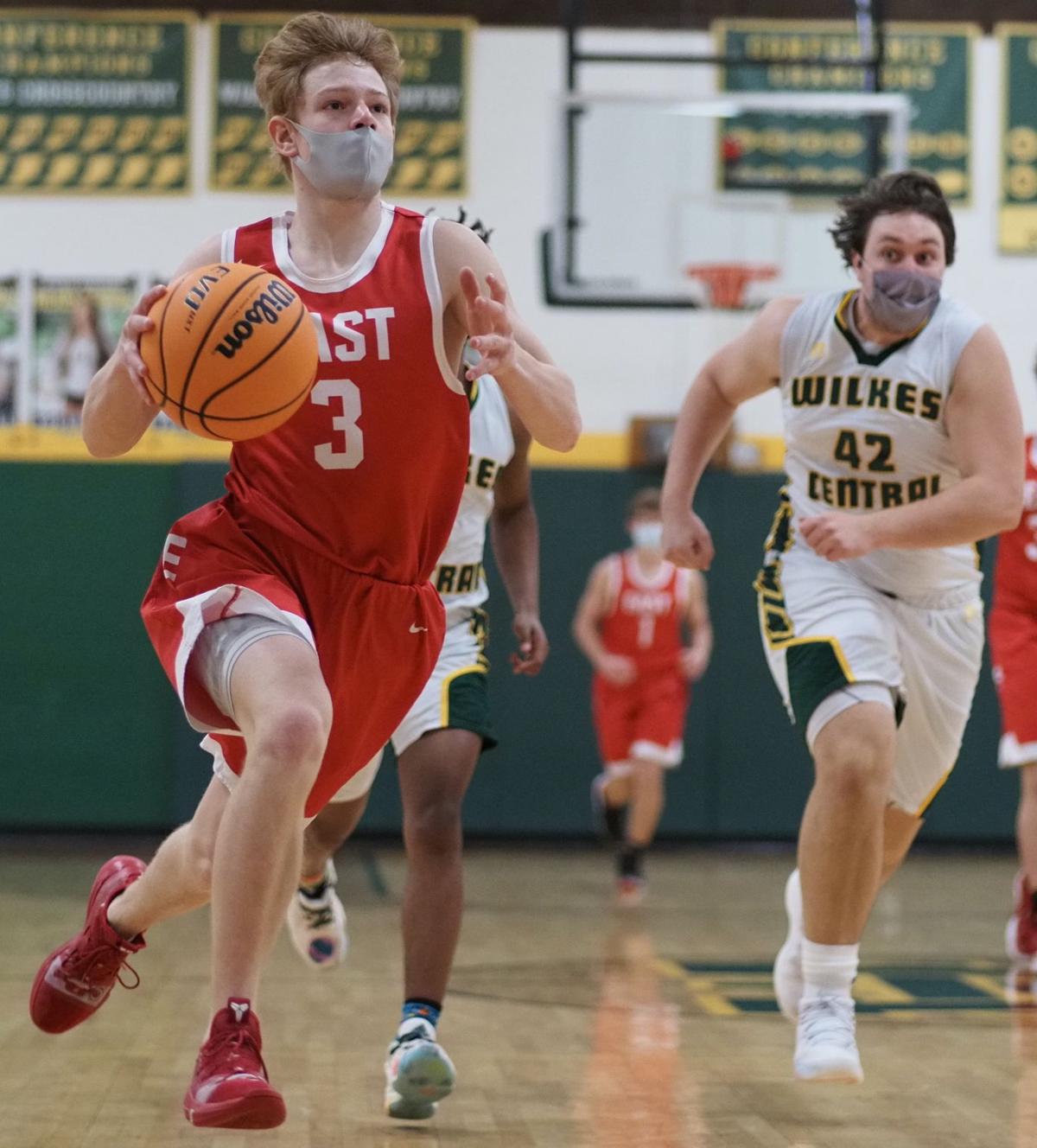 A pair of steals and layups by East’s Bryson Sidden sparked the Cardinals on Thursday. Here, Central’s Jonah Brooks trails on the play. 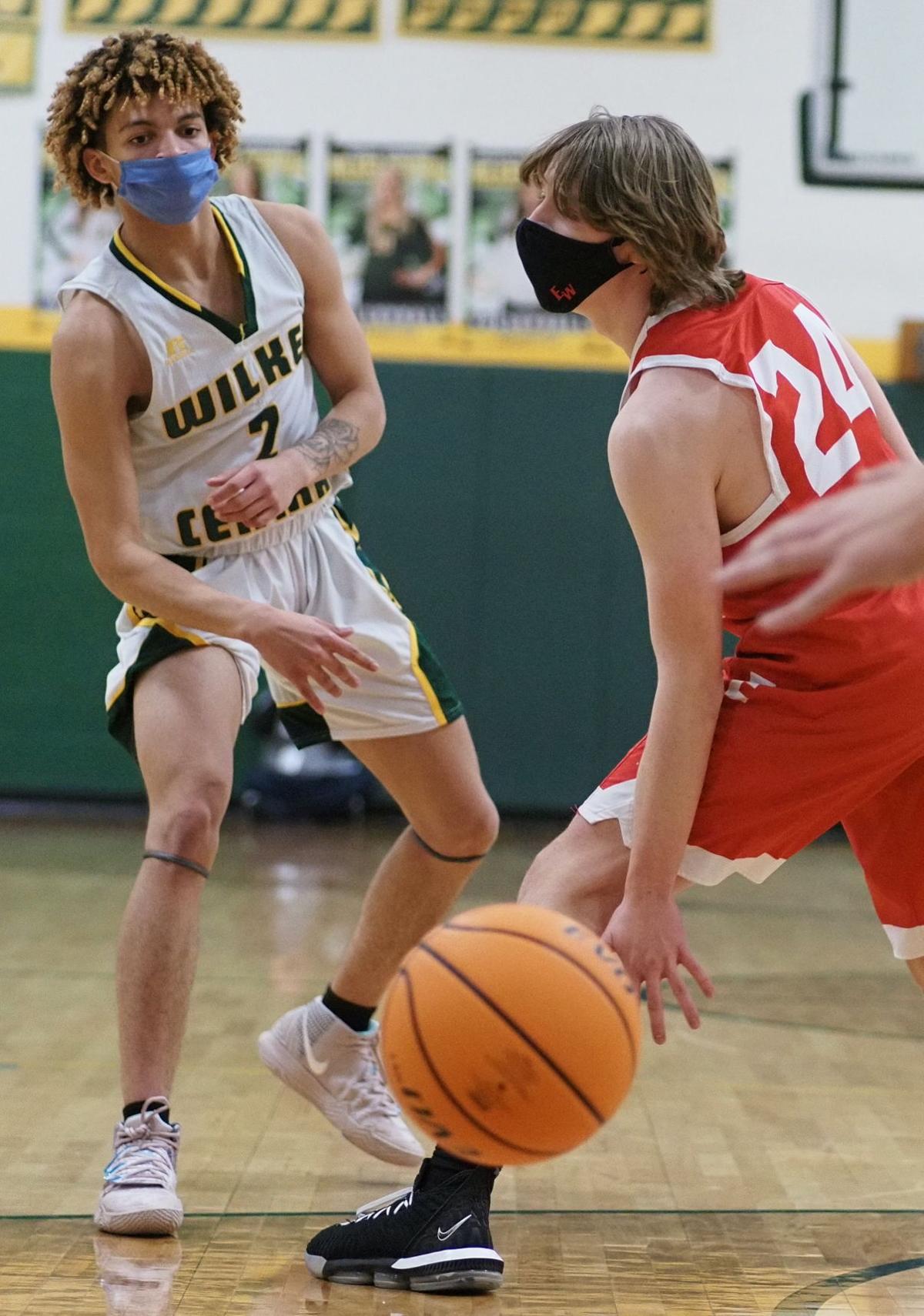 Wilkes Central’s Carlos Reyes-Martin feeds Jonah Brooks in the post on Thursday as East’s Braxton Long defends. Long led the Cardinals with 16 points in a 67-64 setback to the Eagles.

Wilkes Central’s Zach Mastin’s path to the basket is contested by East Wilkes’ Bryson Sidden (3) and Dylan Ward. Mastin and the Eagles edged the Cardinals in Moravian Falls, 67-64.

East Wilkes’ Dylan Ward, here driving by Wilkes Central’s Zach Mastin, had 13 points in the Cardinals’ 67-64 loss to the Eagles on Thursday.

Sophomore point guard Anthony Graham scored 13 of his team-high 15 points in the second half of a 67-64 win over East Wilkes in Moravian Falls on Thursday.

A pair of steals and layups by East’s Bryson Sidden sparked the Cardinals on Thursday. Here, Central’s Jonah Brooks trails on the play.

Wilkes Central’s Carlos Reyes-Martin feeds Jonah Brooks in the post on Thursday as East’s Braxton Long defends. Long led the Cardinals with 16 points in a 67-64 setback to the Eagles.

The normally raucous Nest was nearly empty on Thursday, but the result was the same: another win for the Wilkes Central varsity boys inside the warm, friendly confines of home.

The Eagles trailed East Wilkes for much of the game but executed well when it mattered most to take a 67-64 victory in Moravian Falls.

“I was proud of our team,” said Central’s coach, Matt Hagaman. “We were able to find another gear in the second half, play with more intensity on the defensive end of the floor, get the ball inside on offense, make big outside shots, and make key free throws down the stretch.”

The win — the Eagles’ eighth straight over the Cardinals — evened up Central’s record after a season-opening loss at North Wilkes on Jan. 5. East fell to 0-2 in the Mountain Valley 1A/2A Athletic Conference.

In the last 49 games on its home court — affectionately nicknamed The Nest — the Central boys are 44-5. Thursday’s game was the first played there under COVID-19 restrictions, which meant no visitor attendance and less than 25 home fans.

The Eagles applied their trademark full-court pressure from the opening horn and got off to a hot start. Anthony Graham’s pass to Jonah Brooks for a layup gave the hosts a 10-2 lead and prompted an East timeout with 3:54 left in the opening quarter.

East’s Braxton Long drained a 3-pointer with 25 seconds left to cut the Central lead to 14-13 after a quarter of play. Long had a trio of 3-pointers in the first half, scoring 14 of his team-high 16 points.

The Cardinals took the lead early in the second quarter and enjoyed a 32-27 advantage at halftime.

Two steals and layups by East’s Bryson Sidden gave East a 36-27 lead with 7:20 left in the third quarter, and another driving, three-point play by Sidden boosted the Cardinal lead to 42-33 with 4:24 left in the quarter. Sidden scored 10 of his 13 points in the second half.

The Eagles then clawed their way back into the game, as a Brooks follow made it a 42-38 game with four minutes left in the third. Central’s Zach Mastin made a runner in the lane shortly before the buzzer—his only two points of the game—to cut the East lead to 49-46 after three quarters of play.

East’s Tate Samples made a layin for a 56-49 lead and a Central timeout with 4:54 left in the game. A three-pointer by Graham cut the Cardinal advantage to 57-54 with about four minutes to play.

Central finally evened the score at 57-all after a driving layup by Carlos Reyes-Martin, who was fouled on the play by Samples and completed the three-point play at the line with 3:37 to play.

Ward’s driving layin with 2:17 to play drew the fifth foul on Brooks and spotted East a 61-58 lead. Reyes-Martin came up short on a baseline runner and the Cardinals took timeout with possession of the ball and a one-point lead with 1:23 to play.

Long missed a jumper on the next possession, and Central took a 30-second timeout. Central’s Spencer Leatherman made a key 3-pointer with 1:06 left in the game and finished with 13 points.

Ward was then fouled on his drive to the basket, sending him to the line for two free throws with 45.2 seconds left and his team down by two. He made both foul shots to tie the game.

Mastin dished to Kamen Smith in the lane, who drew the fifth foul on Sidden with 35.2 seconds left. Smith, a sophomore forward, made both charity stripe attempts for a 65-63 lead. For the game, Smith was 6-for-12 at the line.

On its next trip down the floor, East’s Ethan Cass was fouled on a jump shot by Allen with 16.4 seconds left. He missed the first free throw but made the second.

Graham was fouled by Ward with 14.2 seconds left and made the first but missed the second. East rebounded and took a timeout with 9.9 seconds left.

A sophomore point guard, Graham scored 13 of his team-high 15 points in the second half.

Down by two, Ward took the inbounds pass and dished to East’s Ledger Blackburn, whose short eight-foot runner in the lane rimmed out with about two seconds left, preserving the win for the Eagles.

Smith rebounded the miss and was immediately fouled. He made the first free throw but Cass rebounded the second miss and one-handed a heave from the opposite foul line that caromed off the backboard as the buzzer sounded.

Brooks chipped in with 12 points for the Eagles, and Smith had 10.

Ward also had 13 points for the Cardinals. Blackburn finished with 10.

On Jan. 5, West Wilkes clipped East Wilkes in Ronda, 59-50. The win was the Blackhawks’ ninth straight over the Cardinals.

“This team is very resilient and very hungry,” said Scottie Greene, the West coach. “We started off really well and then had a lull. I am really proud of how our athletes bounced back after surrendering a lead and having to overcome a momentum shift during a road game.”

Senior guard Dawson Osborne led the Blackhawks with 18 points, and senior Dylan Miller had 10 points and played every minutes of the game. “Dylan played really big for us defensively in playing multiple spots and with his rebounding,” noted Greene.

Tied 41-all with five minutes left in the game, the Blackhawks went on an 11-0 run, sparked by a three-point play by Carson Edmiston and a steal and layup by Riley Ledford.

East’s Ledger Blackburn hit a running 3-pointer to cut the West lead to 55-50 with 17.8 seconds left, but then Osborne and reserve Nathan Hall each hit a pair of free throws to seal the victory.

“Nathan had only two points, but it’s the leadership on and off the floor that set him and many on this team apart,” added Greene.

Greene said the team received a spark from reserve senior Ledford. “Riley came in and really ignited the team” with seven points and six rebounds.

Other contributions came from sophomore Edmiston, who “played very well with five points and was huge on the defensive end. Junior Logan Wayne had eight points and had a massive bucket in a critical juncture.”

Greene added, “First and foremost, I would like to thank God for us just being able to play a game—that in itself is awesome. We chose not to scrimmage anyone this year simply because we wanted our full team to be healthy for the start of the season.”

The Blackhawks fell to 1-1 on the season after a 66-44 setback against Elkin in Millers Creek on Thursday.

Also on Jan. 5, North Wilkes knocked off Wilkes Central in Hays on senior night, 68-61. It was North’s first win over Central since the Vikings swept the Eagles in 2017.

The Eagles raced out to a 9-0 lead but the Vikings then went on a 12-5 run to cut Central’s lead to 14-12 after the first quarter. “I was really happy with how our guys didn’t get rattled and adjusted,” said North Coach Logan Call.

“I was most happy with how unselfish our guys played and we consistently made the easiest play and it got us open looks and helped open up attacking lanes to the basket,” continued Call. “I told the guys that we played every single guy on our roster and every guy impacted the game in a positive way.”

“I think one of our strengths this year is our depth and that showed when we got in foul trouble in the first half and guys stepped up and made plays when they were called on. It was a total team effort.”

Cloudy skies with periods of rain later in the day. High 56F. Winds light and variable. Chance of rain 80%.

A steady rain early tapering to showers and becoming mixed with snow late. Low 31F. Winds NNE at 5 to 10 mph. Chance of precip 100%.

Cloudy with snow showers becoming a steady accumulating snow later on. Low around 30F. Winds light and variable. Chance of snow 80%. 3 to 5 inches of snow expected.

Showers in the evening with some clearing overnight. Low 31F. Winds light and variable. Chance of rain 40%.

Dog days during a pandemic

Protect the right to be wrong

No rights for unborn under Biden administration

Trump 'lit match' for incident at the Capitol