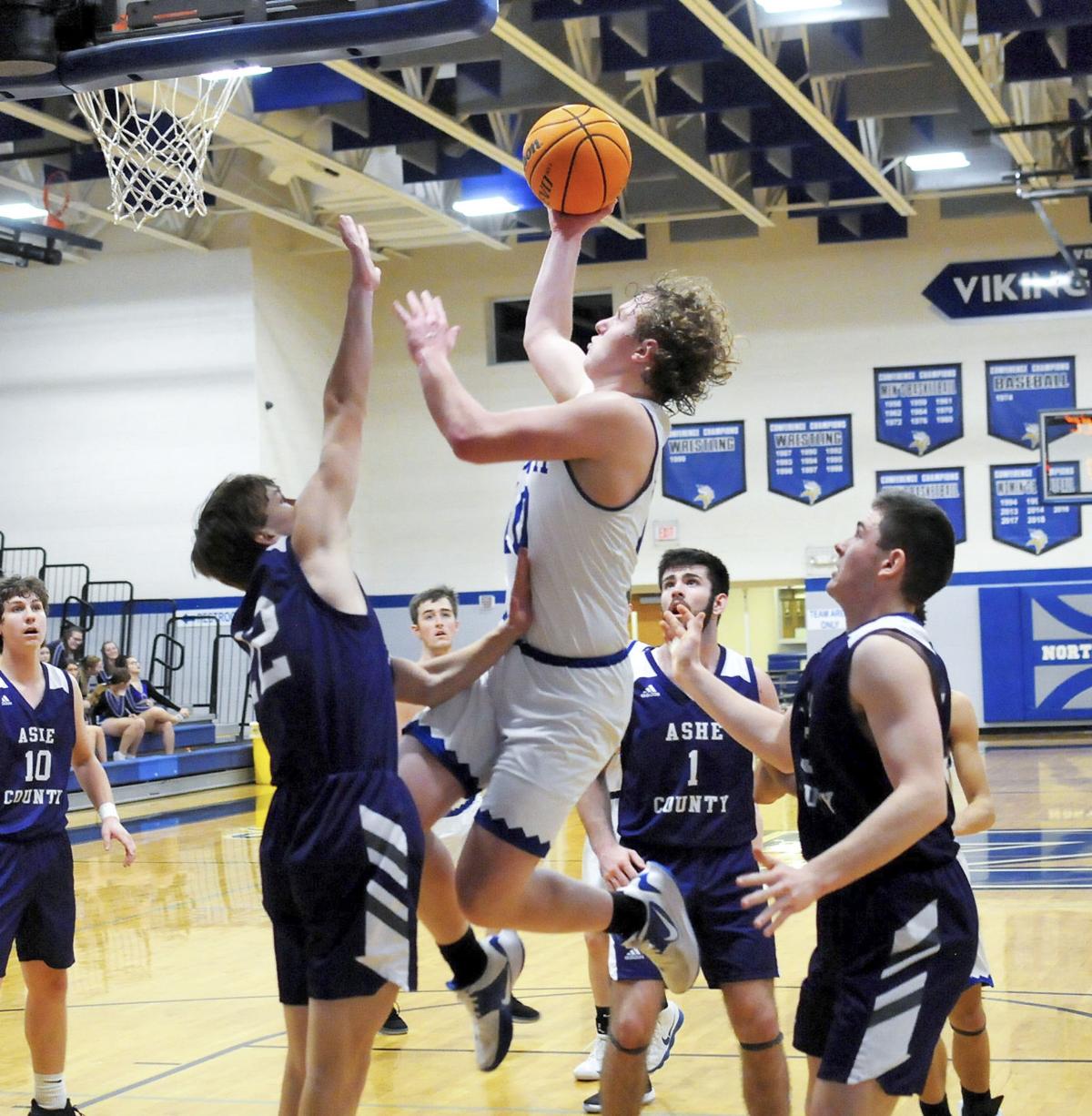 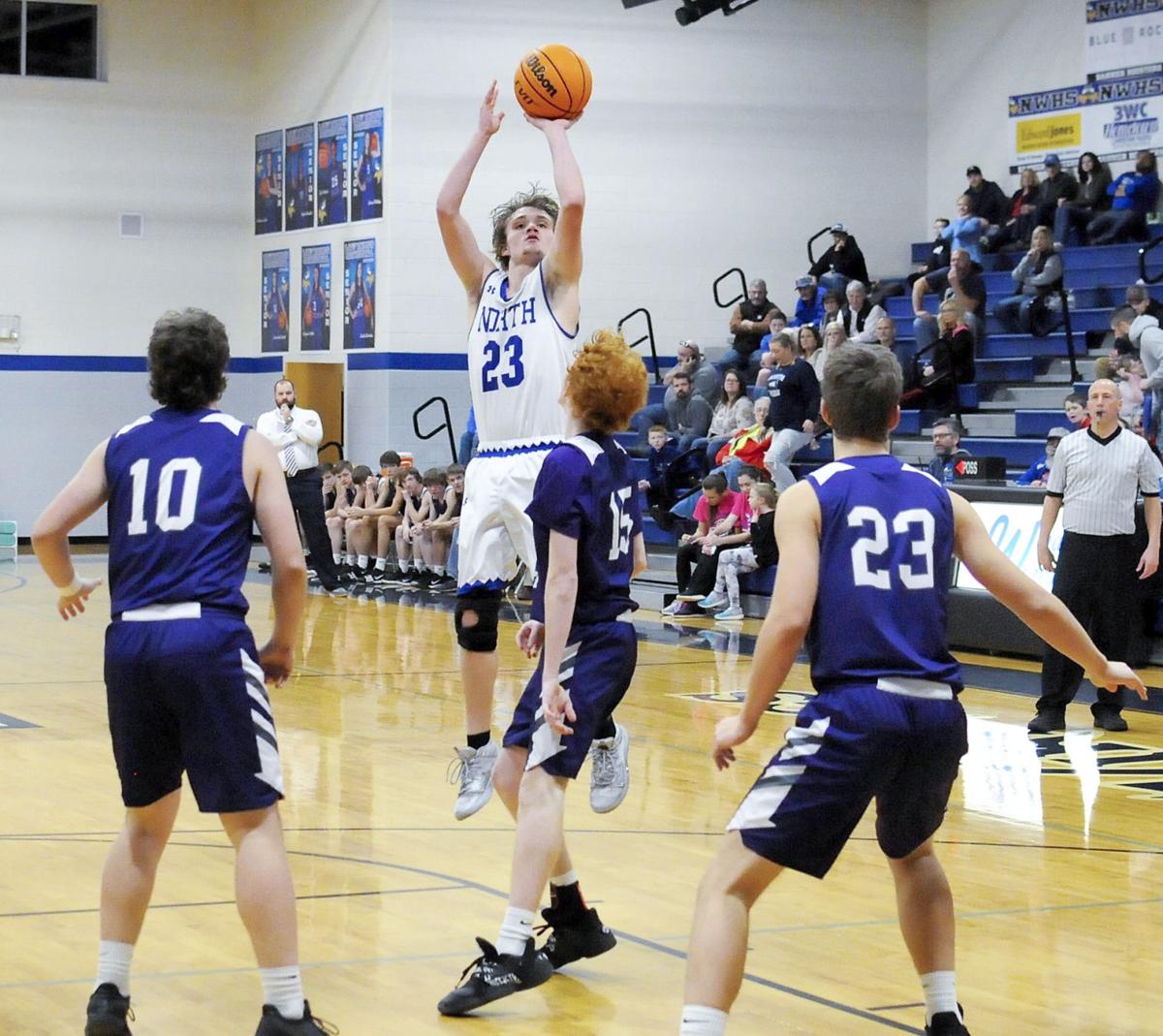 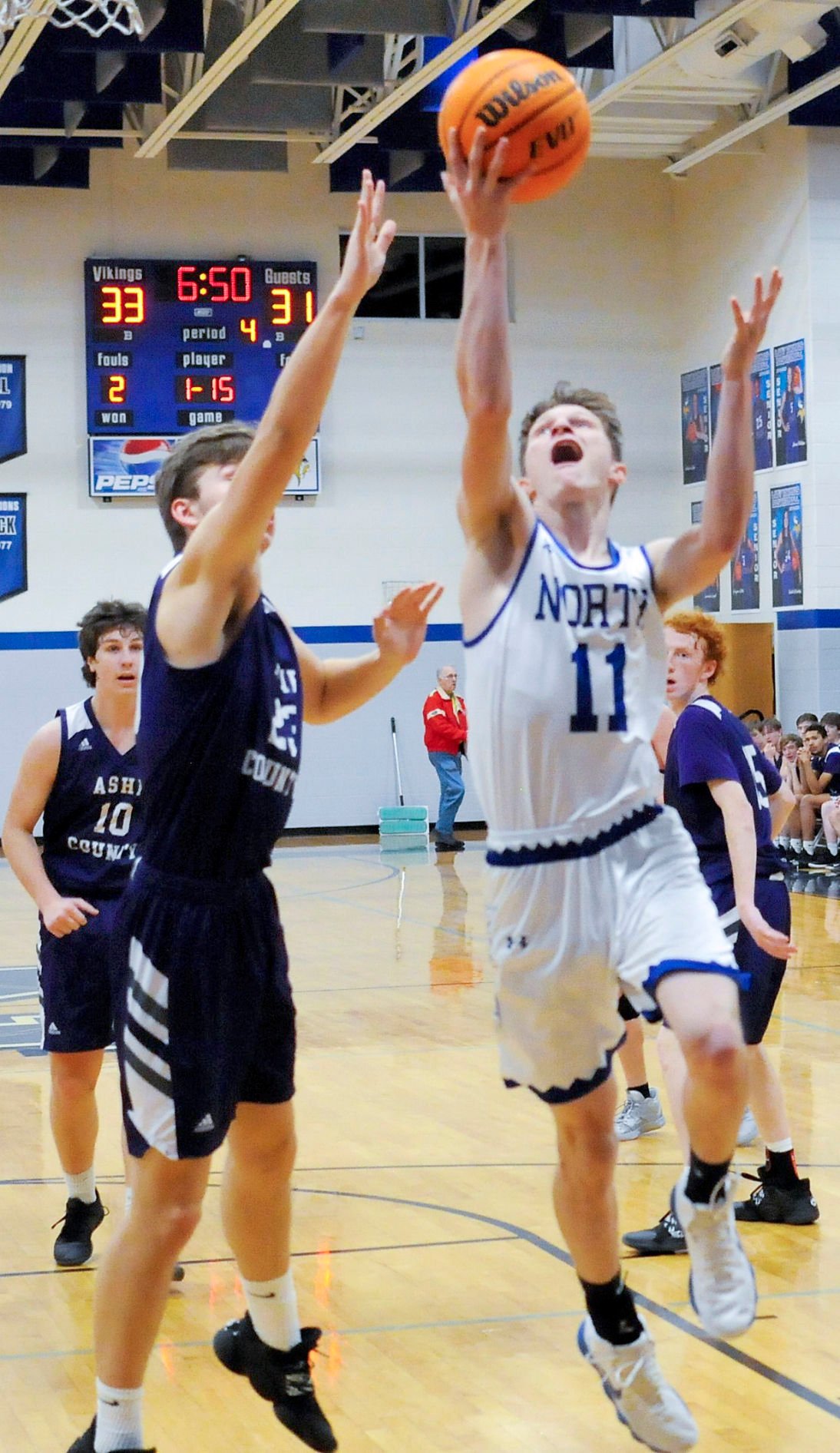 Points were at a premium Tuesday night in Hays.

But the defense never takes a night off for the North Wilkes Vikings and Tuesday, the Vikings rode their defense to a hard fought 45-42 victory over visiting Ashe County.

The defensive stand started in the third quarter, as the Vikings, now 6-14 overall and 2-8 in league play with the Mountain Valley Athletic Conference victory, came out of the halftime locker room trailing 25-16.

But an eight-point third quarter swing cut the deficit to one, at 31-30, entering the fourth.

“The difference in the game was a span of about six possessions early in the third quarter where they didn’t score,” said North Wilkes Head Coach Logan Call. “We were able to get some stops, partly because we were able to force them into a few jump shots that they missed. We didn’t score, either, but we were able to keep them from extending their lead.”

Then came a flurry of offensive activity for the home team near the end of the third precipitated by the Vikings’ full court press.

A drive from the left baseline ended up in a hoop for North’s Matthew Holloway with 1:06 left in the third that cut the Huskies’ lead to 31-24.

That basket enabled the Vikings to get into their press and gave Zack Carlton a chance at the top of the press to wreak havoc.

A steal and layup from the right by Carlton made it 31-26. Almost instantly another steal gave Carlton a look for a tough shot from the left. And right before the third quarter buzzer Carlton drained a jumper from the left elbow to make it 31-30.

All of Carlton’s eight points came in the third (unfortunately for the home team, he missed most of the fourth after fouling out at the 2:45 mark), and helped spark the Vikings’ offense.

“He struggled with his shot early, but I’m proud that Zack didn’t let that affect his overall game,” said Call. “Instead of worrying about his shot, he did other things — steals, rebounds, great defense — that helped keep us in the game.”

North took the lead for good in the fourth after two free throws from Holloway with 5:10 left made it 37-36. In fact the fourth belonged to Holloway, who tallied nine of his game-high 16 points in the final eight minutes.

“When we needed someone to make a play, Matthew made a play,” smiled Call. “He hit a big 3-pointer to start the fourth, and then he attacked the basket, getting to the rim and getting to the free throw line.

“At the end of the day, coaches can put players in a position to succeed, but it’s up to the guys to make the play. And Matthew did that all night long for us.”

Trent Sidden chipped in 13 for the Vikings, nailing three triples on the evening. And Dylan Church only scored two points from the charity stripe, but they were big ones. Church’s points came with only 15 seconds left to play, and his team nursing a one-point lead.

“He’s another kid who struggled offensively but didn’t quit playing with intensity and effort,” said Call. “Dylan is proof tonight that hard work pays off. He kept fighting and when we needed him in the clutch he came through to ice it for us.”

Ashe County dropped to 6-12 and 4-6 with the loss. Austin Poe scored nine points to lead the visitors.

North Wilkes next hosts Elkin tonight in Hays, in a game that also feature the induction of this year’s North Wilkes Hall of Fame class. The Huskies, meanwhile, travel to Ronda to face the East Wilkes Cardinals.

In the night’s JV tilt North Wilkes cruised to a 44-17 win. Again, the defense was key as the Vikings held the Huskies to five points or less in all four quarters.

Cloudy in the evening, then off and on rain showers after midnight. Low 43F. Winds light and variable. Chance of rain 40%.