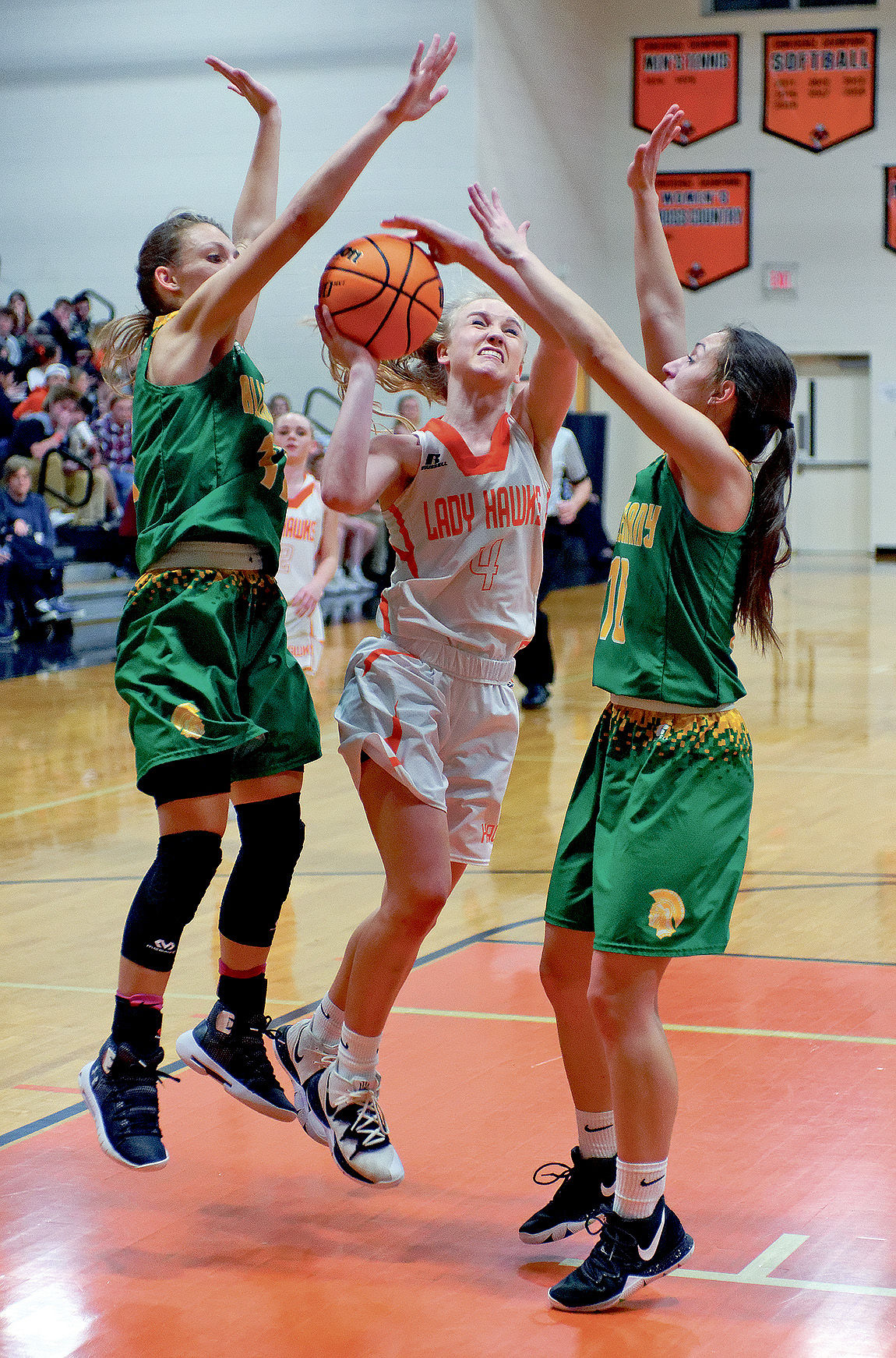 WEST WILKES’ Jamilyn Wilcox puts up a shot between Alleghany’s Abigail Keesling and Abby Hawks in the second quarter. Wilcox scored 15 points for the Blackhawks. 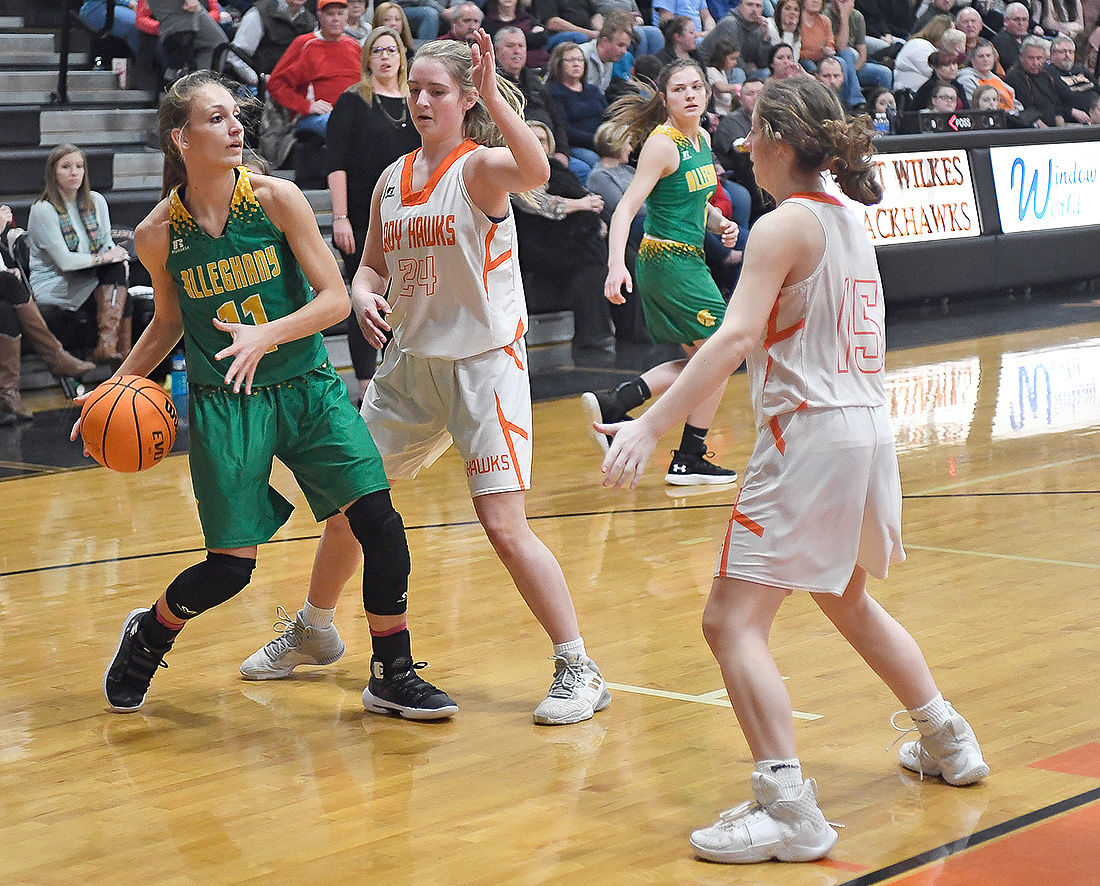 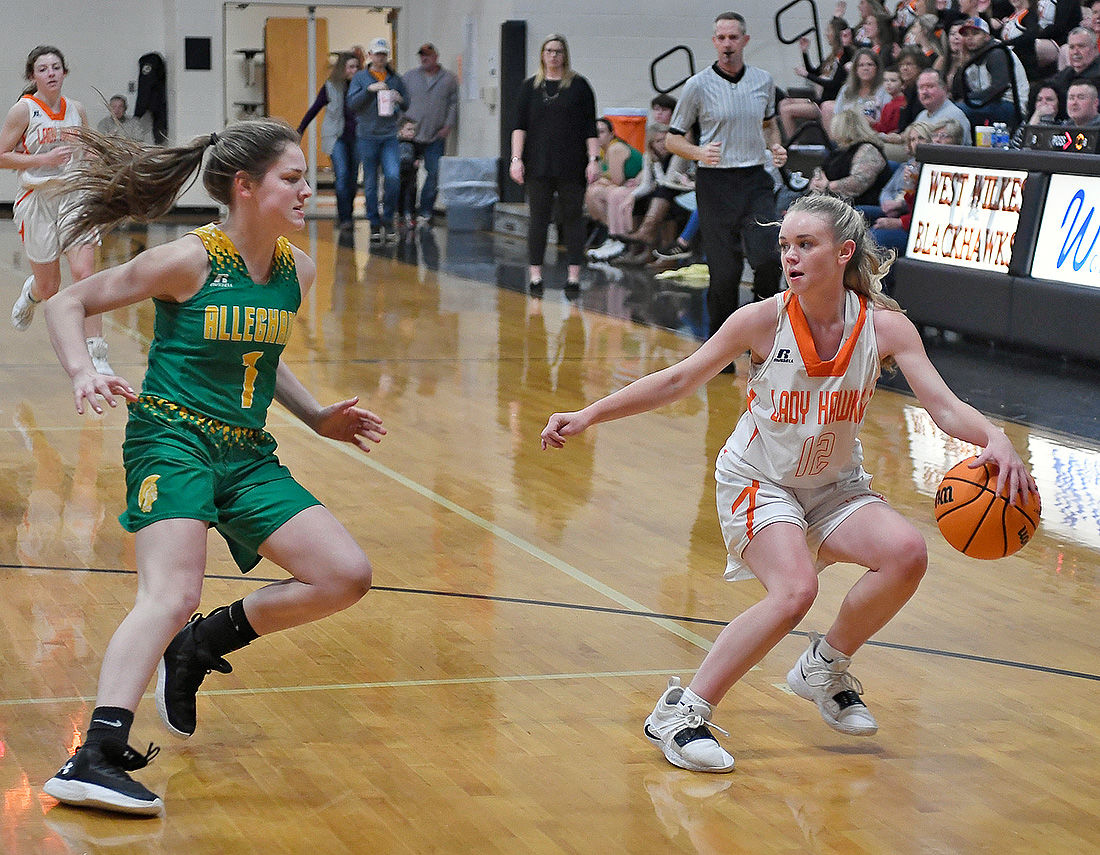 West Wilkes’ Jamesyn Bell dribbles against Alleghany’s Bethany Weaver in the second half. Bell led all scorers with 16 points. 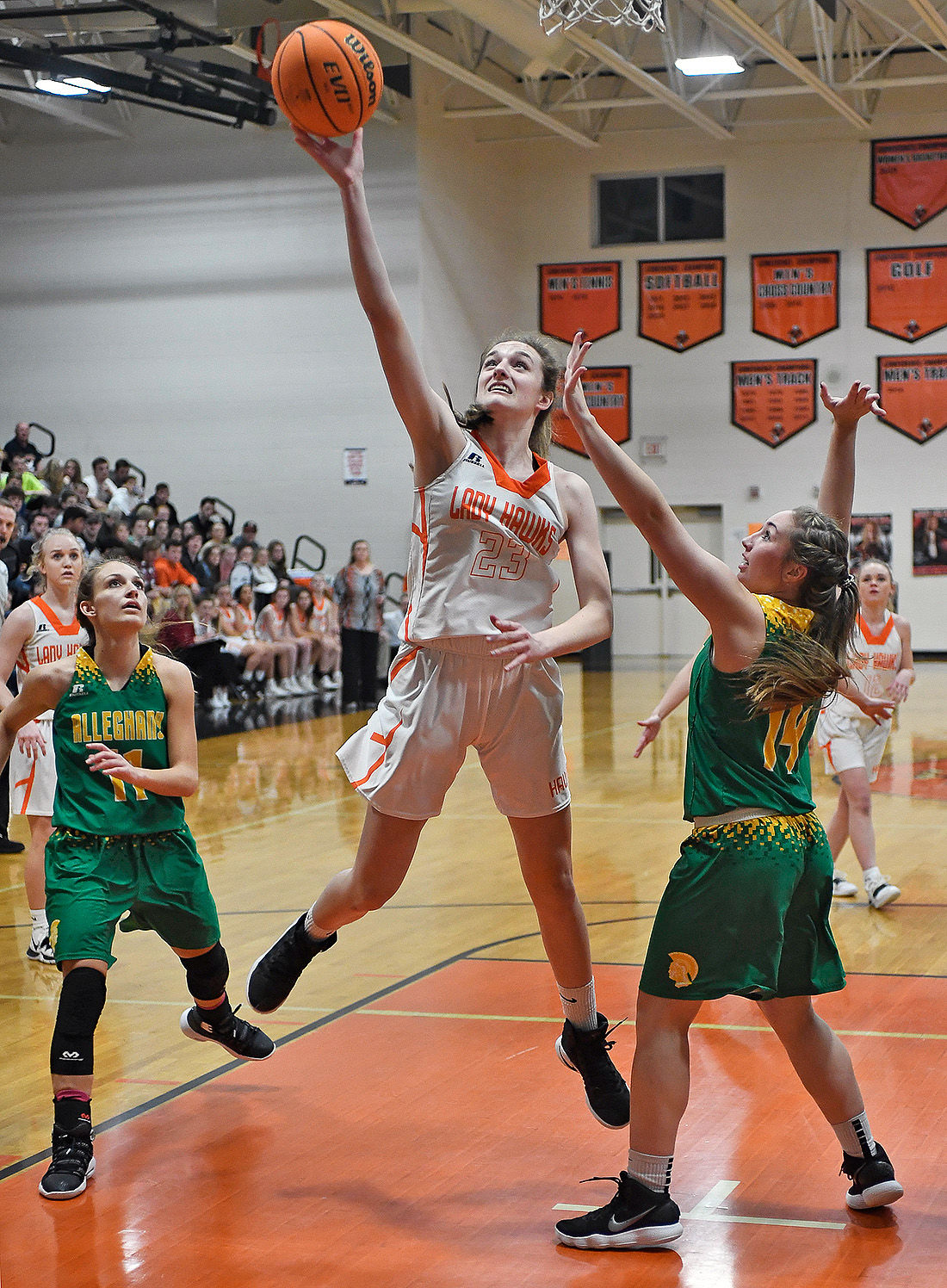 West Wilkes’ Cheyenne Clonch puts up a shot between Alleghany’s Abigail Keesling and MacKenzie Russell in the first quarter.

WEST WILKES’ Jamilyn Wilcox puts up a shot between Alleghany’s Abigail Keesling and Abby Hawks in the second quarter. Wilcox scored 15 points for the Blackhawks.

West Wilkes’ Jamesyn Bell dribbles against Alleghany’s Bethany Weaver in the second half. Bell led all scorers with 16 points.

West Wilkes’ Cheyenne Clonch puts up a shot between Alleghany’s Abigail Keesling and MacKenzie Russell in the first quarter.

One more game. One last chance.

The Blackhawks got a combined 31 points from juniors Jamesyn Bell and Jamilyn Wilcox and took a 54-34 win over Alleghany Friday night in Millers Creek, creating a four-way logjam at the top of the standings with one game to play.

West Wilkes won for the sixth time in its last seven games and improved to 17-4, 10-3 in the Mountain Valley Conference. One game after falling out of a tie for first place with a home loss to North Wilkes, the Blackhawks are back in first, tied with Alleghany, Wilkes Central and Ashe County, which won at Wilkes Central Friday.

Alleghany had a five-game winning streak snapped and fell to 20-3, 10-3 in the conference. Even with the loss, it is the Trojans’ best season since 1992.

The Blackhawks beat the Trojans for only the third time in the past 10 meetings.

“We just knew we had to win and play hard so that we had a chance to get back to first place,” said Bell, who had a season-high 16 points, “and we knew that we had to come out strong because Alleghany has a good team.”

Trailing 10-4 after the first four minutes, the Blackhawks put on their press, and it paid immediate dividends.

West Wilkes forced a pair of turnovers in the final three minutes of the first quarter. The first set up Gracie Lambert’s 3-pointer, and the second—one of Wilcox’s five steals—led to her two free throws and an 11-10 lead.

That was the beginning of a 21-3 run in which the Blackhawks took control. After a Carson Ledford free throw to open the second quarter, Kendall Stanley hit a jumper from the corner, then assisted on the first of Bell’s three 3-pointers. Bell then assisted on Wilcox’s basket inside.

A minute later, three straight turnovers—the Trojans had six in the quarter—resulted in baskets by Skyler McPherson, Kacey Triplett and Ledford to make it 25-13.

“It’s all a mind thing. If you just quit thinking about it…. I think that’s what we did tonight,” said Wilcox, who scored 15 points. “We played good defense, offense. Our free throws were really good.

“We just overall did a really good job as a team.”

Allie Greene, the West Wilkes coach, added, “Our girls did a good job (defensively), even with slowing the ball down, even if we didn’t get anything out of the press.

The Blackhawks scored 20 points off turnovers for the game.

Abigail Keesling, who led the Trojans with 14 points, scored on the fast break off a Haley Rife assist, and Taylor Allen scored off a MacKenzie Russell assist to cut the lead to 31-23 halfway through the third quarter.

But Bell had five points in a 6-1 run to close the quarter and give the Blackhawks a 37-24 lead.

Bell hit her third 3-pointer and scored seven straight points in the first five-plus minutes of the fourth quarter to put the game out of reach.

The Blackhawks held the Trojans to a season low in scoring.

“We tried to take a step back and look at ourselves and maybe not put as much pressure on us as we have been,” Greene said. “Our girls played more relaxed tonight, and they just played basketball.”

Despite the loss, with a win against Starmount Tuesday, Alleghany can win a share of its first conference championship since back-to-back Blue Ridge Conference titles in 1992 and 1993. Wilkes Central can claim a share of the title as well with a win at Elkin.

West Wilkes also controls its fate. If the Blackhawks win at Ashe County Tuesday, they would have a share of the championship for the second time in the past two seasons—and in school history.

“If we take care of business on our end, good things will happen,” Greene said. “At times we’ve taken care of business like we need to and at times we haven’t. But we have a chance at it again, and we’re going to do everything we can to finish strong.”

Bell added, “It’s really encouraging to know that we’re good enough to win conference championships and that we have a chance to be such a good team and make a run.”

But perhaps Wilcox summed it up best.

Notes: With the win, West Wilkes has at least 17 wins for the fourth time in Greene’s tenure as coach…. If the Trojans win Tuesday, it will be a personal milestone for Rife, a senior and four-year varsity player. Her mother, Tracy Greene Rife, played on Alleghany’s 1991-92 championship team that also won the conference tournament and entered the state playoffs with a 24-1 record. Tracy Rife is the sister of Scottie Greene, who coaches the West Wilkes boys.