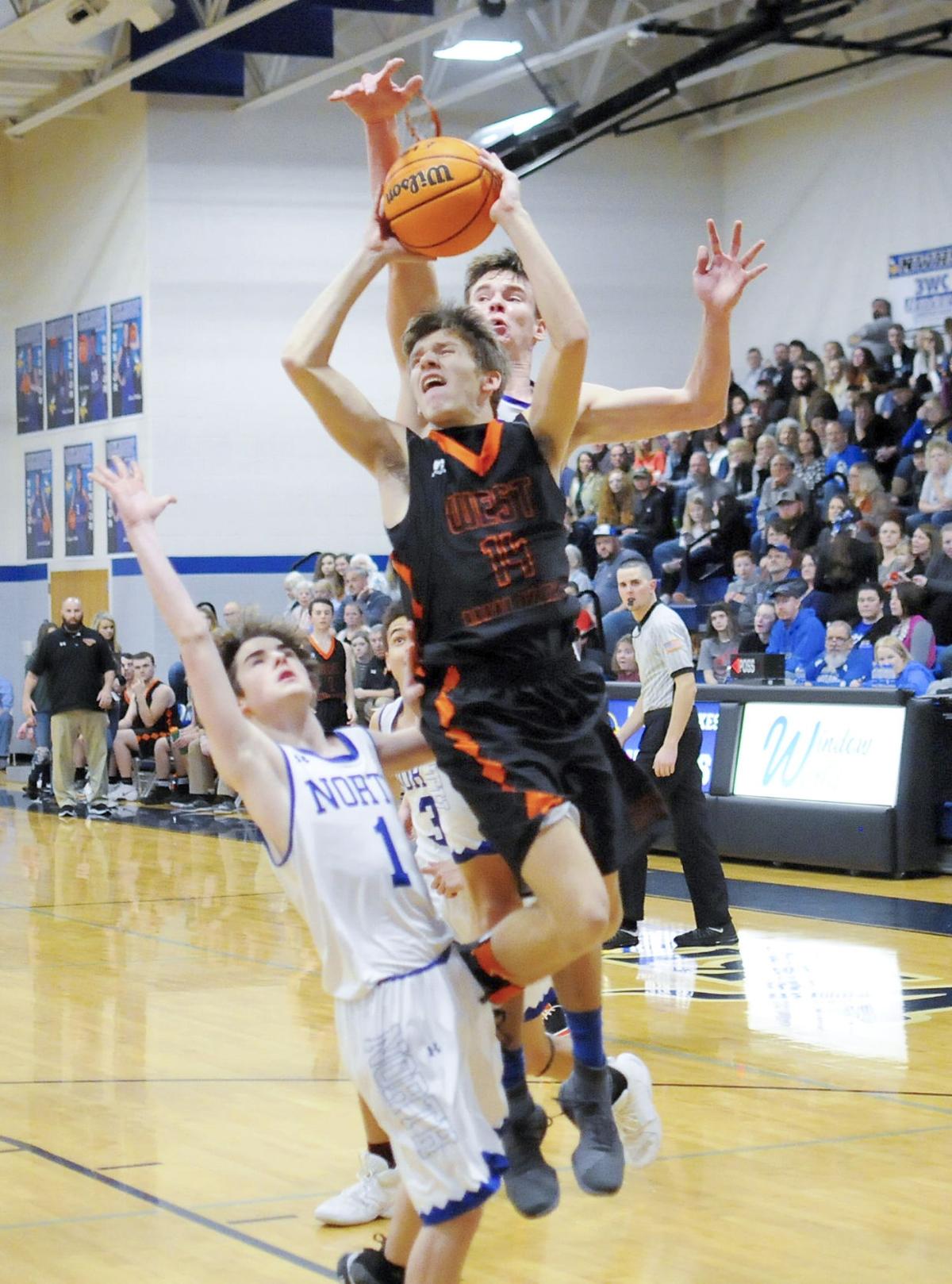 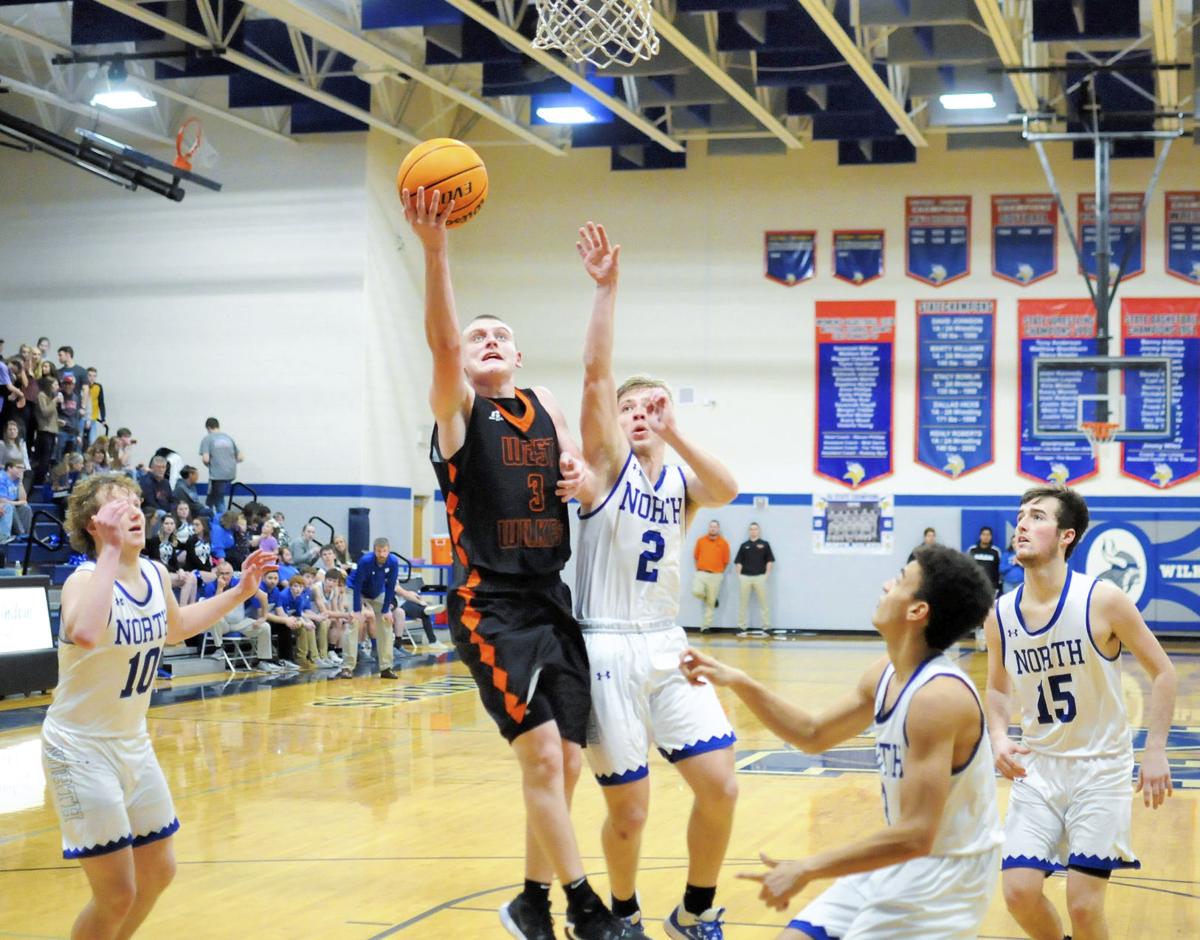 JACOB BROWN, who finished with 15 points, goes up for a shot in heavy traffic on Friday night. Brown is being defended by North Wilkes’ Matthew Holloway (10), Dylan Church (2), Zack Carlton and Trent Huffman (15). 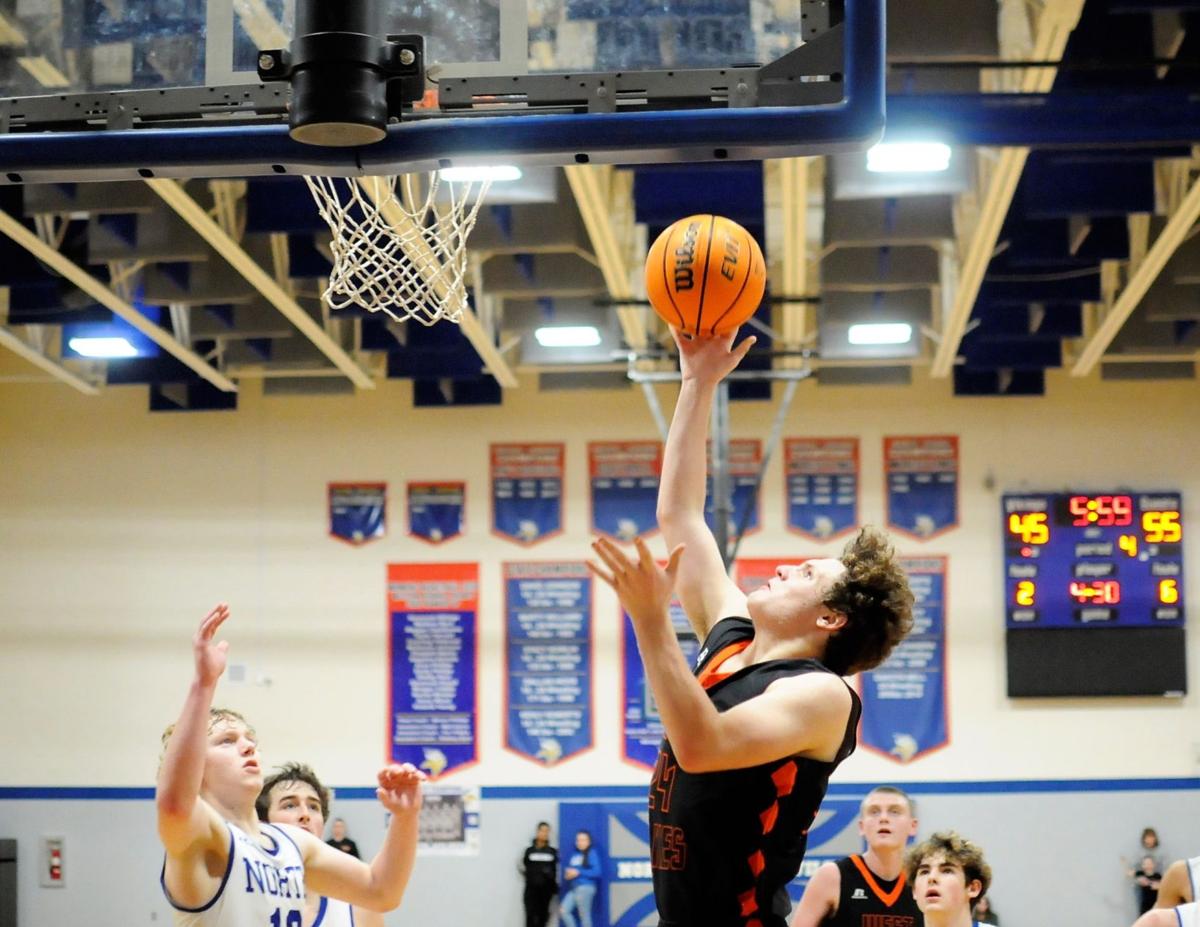 JACOB BROWN, who finished with 15 points, goes up for a shot in heavy traffic on Friday night. Brown is being defended by North Wilkes’ Matthew Holloway (10), Dylan Church (2), Zack Carlton and Trent Huffman (15).

Austin Triplette had himself quite the night Friday night in Hays.

And his West Wilkes Blackhawks needed every one of Triplette’s game-high 28 points, because North Wilkes almost had itself quite the comeback.

But thanks to a thrilling long-distance display from the junior wing, the Blackhawks withstood a late Vikings’ charge and earned a 70-63 Mountain Valley Athletic Conference victory.

”My teammates did a great job tonight finding me,” said Triplette. “I think Jaden (Wentz, a senior guard) had about five assists to me in the game. We have had a lot of guys who have stepped up and had big games for us this season, and I’m glad I was able to do my part tonight.”

With the win, the Hawks improved to 9-4 overall and a perfect 5-0 in league play. And leading the way was Triplette — the West sixth-man who sank eight 3-pointers on the night.

“He was blistering hot,” said West Wilkes Head Coach Scottie Greene. “And he had some good passes from his teammates that enabled him to step right into those shots in rhythm. We needed it. Austin carried us tonight. And the big thing is he played just as well on the defensive end, too.”

“We knew coming in he could shoot it,” said North Wilkes Head Coach Logan Call, whose team fell to 1-4 in the MVAC and 5-10 overall. “The thing is I thought we challenged him pretty well on about five of those three-pointers. But we gave up a couple early in the second quarter (when Triplette hit four triples) where we stayed in gap too long. And those two really hurt us, and helped him get in rhythm.”

Triplette’s three-point barrage helped turn a two-point Blackhawks’ lead after the first quarter into a 36-24 advantage at the break. So too did two eerily similar plays from West guard Jacob Brown to close the first and second quarters.

With time running out in the frames, Brown took the ball to the left, just off the elbow, for a last-second shot at the buzzer. And on both drives Brown was fouled by the North defense with exactly one-tenth of a second left on the clock.

Brown hit three of four free throws after those two drives, and Call remembered those plays as pivotal after the game.

“Those were big, especially at the end of the quarter at half. They’re a very good team, and good teams make plays like that in those moments,” said Call.

But despite the double-digit deficit at the intermission, the Vikings weren’t done. Slowly, North fought back, especially in the fourth quarter and by the time Colby Brown nailed a 3-pointer with under a minute to play the margin had dropped to a mere 65-62.

The Vikings were forced to foul after Brown’s shot, and the ’Hawks were good enough from the charity stripe down the stretch to seal the win.

West’s Jackson Stinson answered Brown’s trey with two free throws with 44 second left to build the lead back to five. And Brown, the West floor general, went 3-of-6 from the line in the final seconds to help hold the home team at bay.

“This team has a lot of grit,” said Greene of his ’Hawks. “Last year, in a situation like we had at the end of this game where the other team is making a run, we might have panicked. But we’ve been in some wars together over the past couple of years. We know we’re going to get everyone’s best shot now, and I think we’re ready for it.

“Tonight, overall, was just a gutsy win,” added Greene. “We didn’t play our best basketball, but we found a way to win. We keep taking steps in the right direction.”

Brown added 15 points for the ’Hawks, including seven in the third quarter, and Stinson finished with 12.

Zack Carlton led the Vikings with 15 points and Matthew Holloway chipped in 14. And Call made sure to mention the contributions of reserve Grayson Lamb, who sparked the Vikings early with two huge drawn charges and a 3-pointer of his own in the first half.

“Grayson has been doing everything right, and we’ve told him he has earned more playing time,” said Call. “He did great Tuesday against Elkin (a 58-46 Elks’ win) and he was fantastic again tonight. He is really battling on the court right now.”

Next up for the Blackhawks is a road trip to Alleghany Wednesday. North Wilkes, meanwhile, will try and climb back in the win column with a home game Wednesday against Starmount, currently in second-place in the MVAC standings.