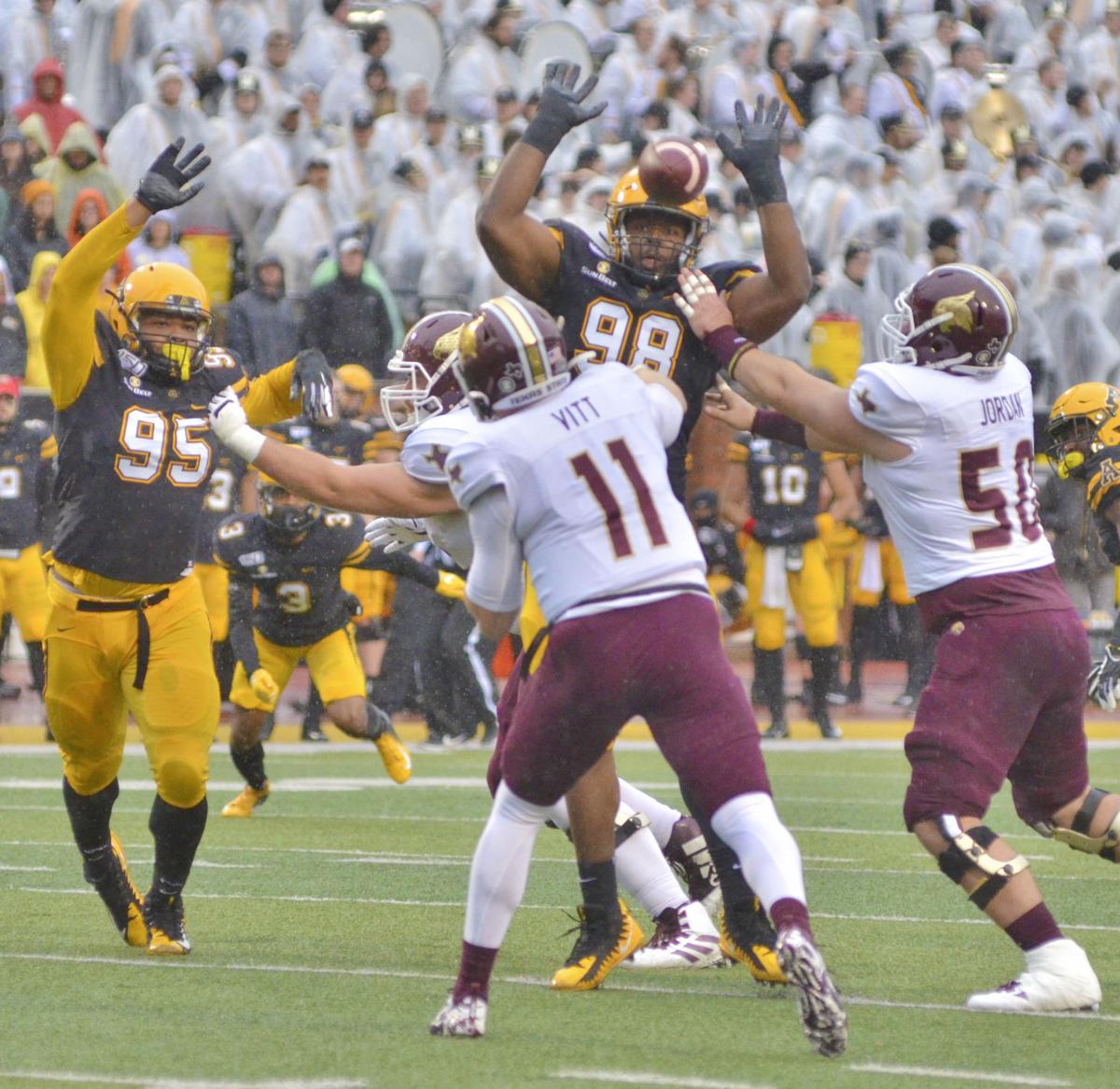 E.J. Scott bats down a pass from Texas State quarterback Tyler Vitt early in Appalachian State’s 35-13 win. Also in the photo for the Bobcats is Reece Jordan. 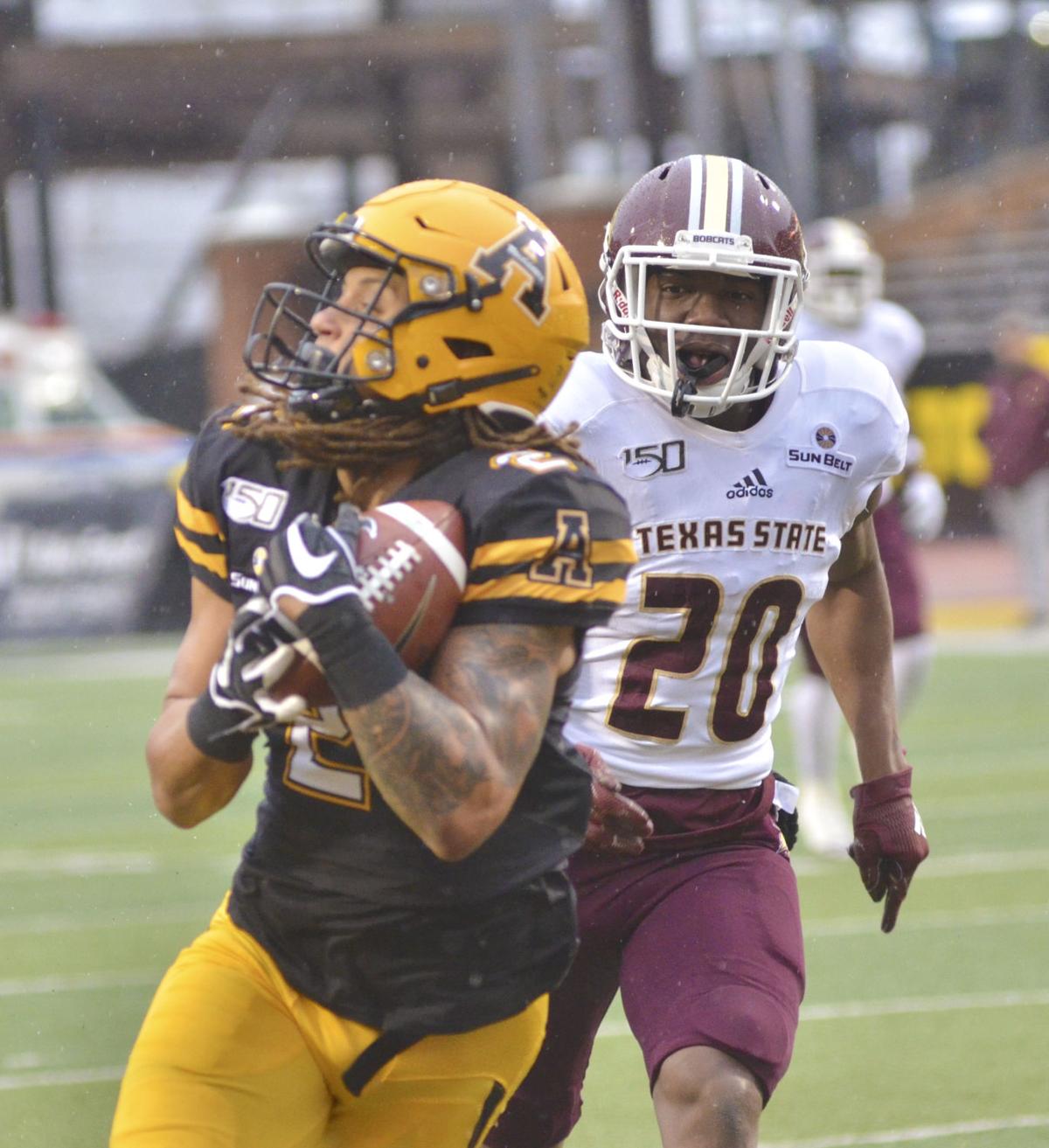 E.J. Scott bats down a pass from Texas State quarterback Tyler Vitt early in Appalachian State’s 35-13 win. Also in the photo for the Bobcats is Reece Jordan.

BOONE — Noel Cook came through at the most opportune time during Appalachian State’s 35-13 win against Texas State on a soggy Saturday afternoon.

Cook, one of 17 seniors recognized before the game in front of 22,125 fans at Kidd Brewer Stadium, made what turned out to be a game-changing interception with the Mountaineers clinging to a one-point lead (14-13) early in the third quarter.

According to Cook, the interception was a measure of redemption after letting one slip away in the first half. Cook admitted he couldn’t take all the credit for the pick, giving a big assist to fellow senior E.J. Scott, who managed to tip the pass attempt from Texas State’s Tyler Vitt at the line of scrimmage.

From there, the Mountaineers scored 21 unanswered points.

“It felt really good. I kind of just felt like I needed redemption for missing the first one, so it just felt really good to go out there and provide the momentum we needed,” Cook said about the pick. “But I have to credit that to E.J. right here because if he didn’t deflect the ball then that play wouldn’t have happened.”

Darrynton Evans supplied the offense in the second half with touchdown runs of 13 and 10 yards to stretch App State’s lead to 28-13 after Chandler Staton’s extra point. The first score came off Cook’s pick and the latter score came with no time left on the clock in the quarter.

The junior Evans, who finished with 154 yards, added his third touchdown of the half — a 13-yard scamper — with 6:26 to play in the game.

“Obviously, it’s a good win. It’s always good to win on Senior Day. It took us a little bit to get going. Noel Cook’s interception in the third quarter was a huge momentum boost for our team. We were able to capitalize there and finish it off,” said Appalachian State Head Coach Eliah Drinkwitz. “I’m proud of the way our guys fought and hung in there. Defensively, we played really well except at the end of that drive right before the half. We have to eliminate that, but for the most part we played solid football.”

Corey Sutton wasted little time putting Appalachian State (10-1, 6-1 Sun Belt Conference) on the board as he hauled in a 45-yard touchdown pass from Zac Thomas.

Unfortunately, Sutton had to leave the game in the second quarter following a knee injury. The senior announced through Twitter on Sunday that it’s a torn ACL and will miss the rest of the season.

The Mountaineers had a chance to extend their lead early in the first half but a turnover on downs on their first drive of the second quarter and a missed 24-yard field goal from Staton kept it close.

But after a 48-yard field goal from Joshua Rowland, graduate transfer Keishawn Watson padded Appalachian’s lead with a minute to play in the first half when he laid out in the end zone to haul in a 19-yard pass from Thomas.

“I cannot say enough positive things about Keishawn, what he’s done and the role he’s embraced. He transferred here (after graduating from Western Michigan) because he wanted to have a larger role, and Thomas (Hennigan), (Jalen) Virgil, Malik (Williams) and Corey (Sutton) have been playing really well,” said Drinkwitz. “So, he had to become a team guy. He’s been that. He’s been a dirty-work guy. He’s done everything we’ve asked him to do, and he’s never once complained. He’s just done everything we’ve asked him to do to win.

“For him to get a touchdown on Senior Day was so appropriate,” added Drinkwitz. “Football knows. The game knows, and the game knew it was time to reward him. He said, ‘Coach I can ball, so what’s the big deal?’”

But the Bobcats (3-8, 2-5) responded almost instantly when Vitt found Javen Banks in stride for a 53-yard touchdown with three seconds left to cut the Mountaineers’ lead to 14-10 after Rowland’s extra point. A senior, Rowland added another 48-yard field goal on the Bobcats’ first drive of the third quarter to make it a 14-13 game.

Banks, along with Jeremiah Haydel, led all receivers with five receptions for 82 yards.

With the win, the 22nd-ranked Mountaineers eclipsed the 10-win total for the fourth time in the last five seasons. The victory and Georgia Southern’s 38-33 loss at Arkansas State on Saturday, secured Appalachian State’s spot in the Sun Belt Conference championship.

The game is scheduled for Dec. 7 at a site to be determined. The Mountaineers could host it again, should it win at Troy this coming Friday, but Drinkwitz was only focused on the Trojans following Saturday’s game.

“We’re just trying to be 1-0 next week against Troy,” said Drinkwitz. “That’s all we’re worried about right now; until something else changes, all our focus is on Troy and being 1-0 and that’s the only way we can secure our way to winning the East and hosting the title game.”