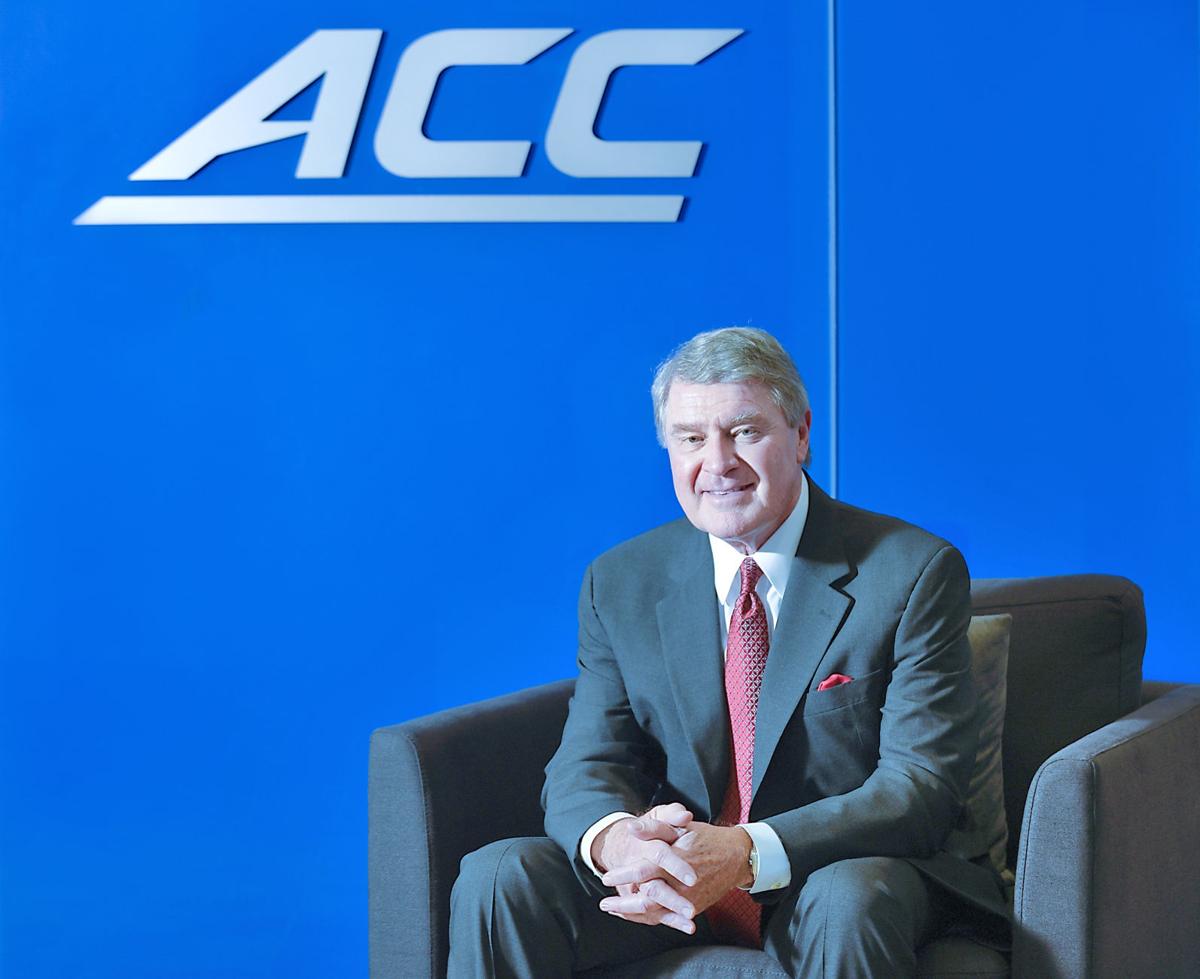 North Wilkesboro's John Swofford, seen here in 2015, recently announced that the 2020-21 athletic year will be his final one as commissioner of the Atlantic Coast Conference. 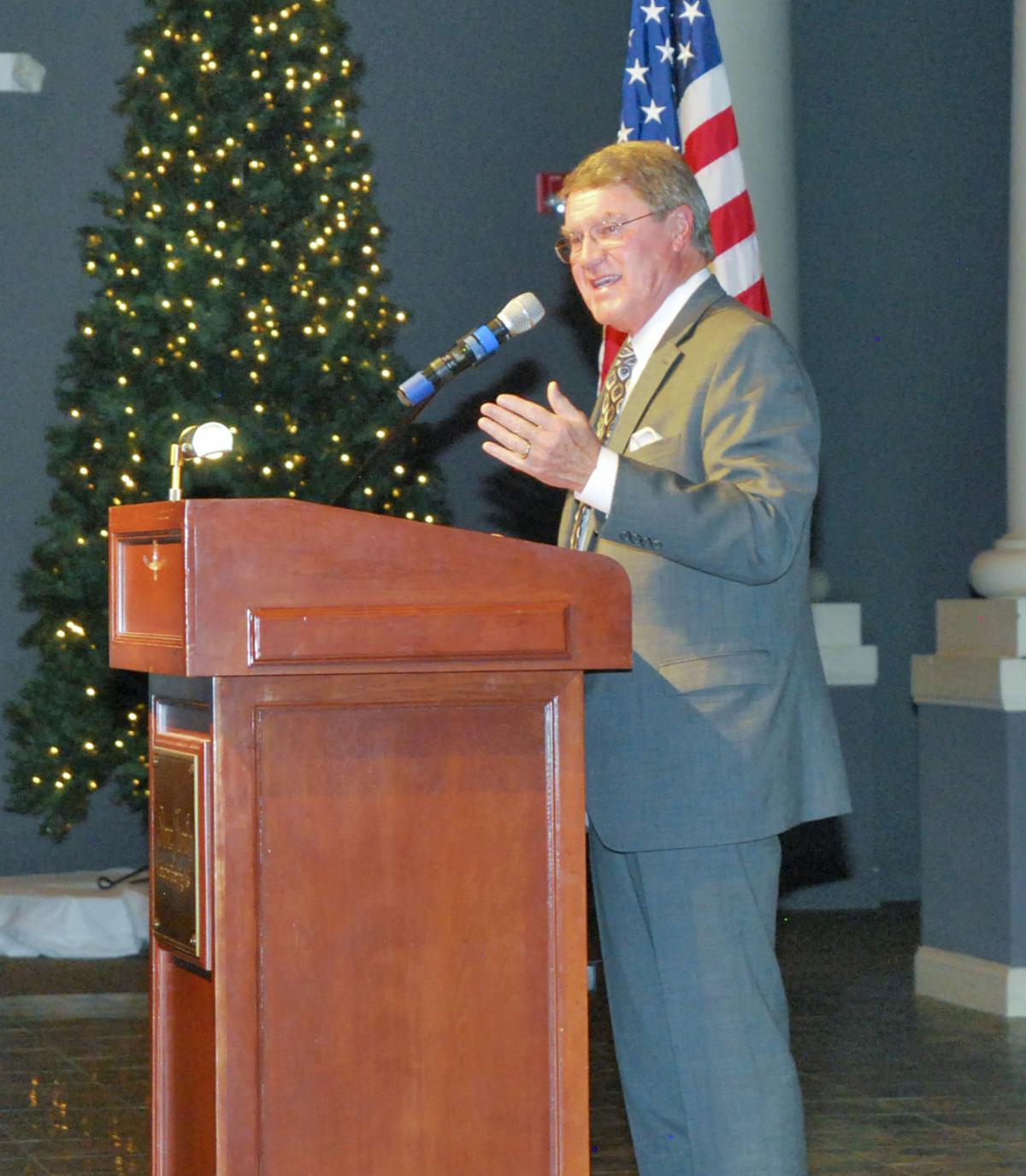 JOHN SWOFFORD, seen here speaking to the North Wilkesboro Rotary Club in 2017, recently announced that the 2020-21 athletic year will be his last one as commissioner of the Atlantic Coast Conference.

In the 67 (going on 68) years of the Atlantic Coast Conference, there’s been just four commissioners of the league.

John Swofford has been commissioner nearly a third of the league’s tenure and a few weeks ago announced that this coming athletic year will be his last as the ACC’s head honcho.

But the North Wilkesboro native will be leaving behind a legacy of accomplishments — including the oversight of some major changes (and times) in the league’s history.

I had the opportunity to meet Swofford back in 2017 while he was in town to speak to the North Wilkesboro Rotary Club. As a Duke fan, I didn’t care too much for his alma mater but it was certainly a pleasure meeting him in person, even if he was affiliated with Duke’s rival.

As I was listening to Swofford speak that night, he talked about what he’s enjoyed about his life in athletics. And it was obvious from his tone, it was about the people who he’s either been influenced by or has met along the way.

“The sports world is something that’s been really good to me. I’ve had the privilege to do a lot of things in sports as an athlete and even probably more so, as administrator, and I wouldn’t trade any of that for the world,” Swofford said back in 2017. “But ultimately, it’s all about the people and what you learn from them, how they conduct themselves and what they accomplish.”

If one word could sum up Swofford’s tenure, it would be change — and there was certainly a lot of it.

Most notably was the expansion that took place since he became ACC commissioner back in 1997.

Prior to Swofford’s appointment as commissioner he witnessed the first wave of expansion as the athletic director at the University of North Carolina at Chapel Hill. Swofford assumed that role back in 1980 when the ACC had only eight teams in the league following the addition of Georgia Tech a year earlier.

After Florida State joined the league in 1991, the conference stayed steady at nine teams, and would stay that way the remainder of his time as athletic director, and the first third of his tenure as ACC commissioner.

But from 2004 to 2014, the league went through major expansion and Swofford felt it was good for the league.

But the first series, which brought in the University of Miami and Virginia Tech in 2004 along with Boston College the following year, was met with some friction from current league members.

“It was not a unanimous vote, my alma mater and Jim’s (his brother, Jim Swofford, who played at Duke) alma mater voted against it; to this day, I’m not sure why, but that’s where their vote was at the time,” added Swofford. “That was the beginning in terms of gaining additional markets that would mean a great deal to us and strengthening our football.”

While football has seen success under Swofford’s guidance with Florida State and Clemson taking home multiple national championships, the ACC has remained one of the premier college basketball conferences in the country.

And expansion has only added to that rich tradition. Three different ACC schools (Duke, UNC and Virginia) have won national titles in the last five years.

It’s almost interesting that on the same day Swofford announced his plan to retire, Vince Carter, who played at UNC during the same time Swofford was athletic director, announced his retirement from the NBA after 22 seasons. Carter was the last active NBA player to play for legendary UNC Head Men’s Basketball Coach Dean Smith.

Another notable ACC player, Tim Duncan from Wake Forest, was taken by the San Antonio Spurs on that day in the 1997 NBA Draft — talk about two players who have been instrumental in the success of ACC basketball in the late part of the 20th century.

As much change as the league has gone through, what COVID-19 has done might be one of the biggest challenges that Swofford has had to navigate. It included canceling the remainder of ACC men’s basketball tournament in Greensboro on March 12.

“This is something that’s much bigger than this tournament, much broader than this locale, because it’s worldwide, and as I said, something we haven’t faced in our lifetime,” said Swofford on the day the ACC men’s basketball tournament was canceled. “I will tell you the way we make decisions in our league generally is by consensus. That’s the way I like to operate. That’s the way I’ve tried to operate for 23 years now, and it’s worked for us. I think we have an excellent culture in the league of trust, and that comes in really handy when you have a crisis situation, and this is a crisis situation.”

As Swofford prepares to embark on his final dance as commissioner, he knows that he will be leaving the conference in a much different place than the one he inherited 23 years ago.

But as the old saying goes, change is the only constant in life and it’ll be interesting to see what happens during Swofford’s final season.

“Had we not taken the direction that we took, I think the ACC would exist. I can assure you, it would not have looked like it does now by any stretch of the imagination.”

A mix of clouds and sun. A stray shower or thunderstorm is possible. High 88F. Winds light and variable.