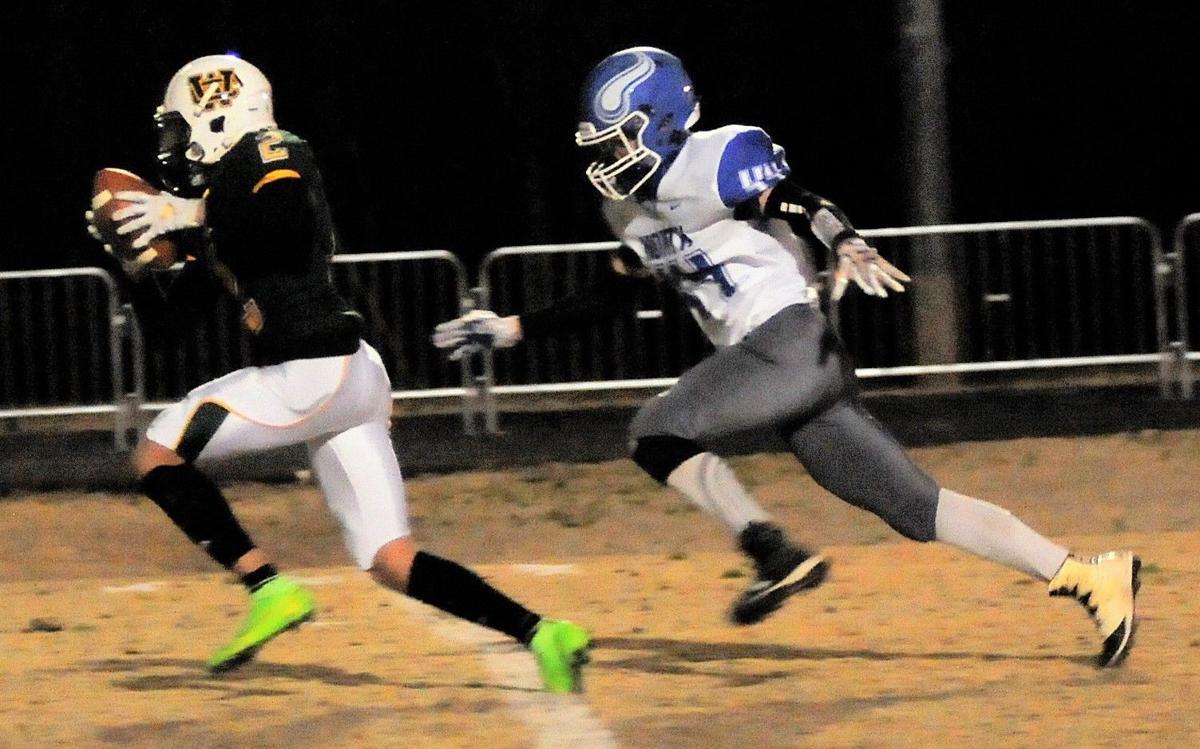 Wilkes Central’s Carlos Reyes-Martin separates from North Wilkes’ Isaiah Rutherford after hauling in a pass from Anthony Graham for a long completion to the 1-yard line in Central’s 34-7 win Friday in Moravian Falls. 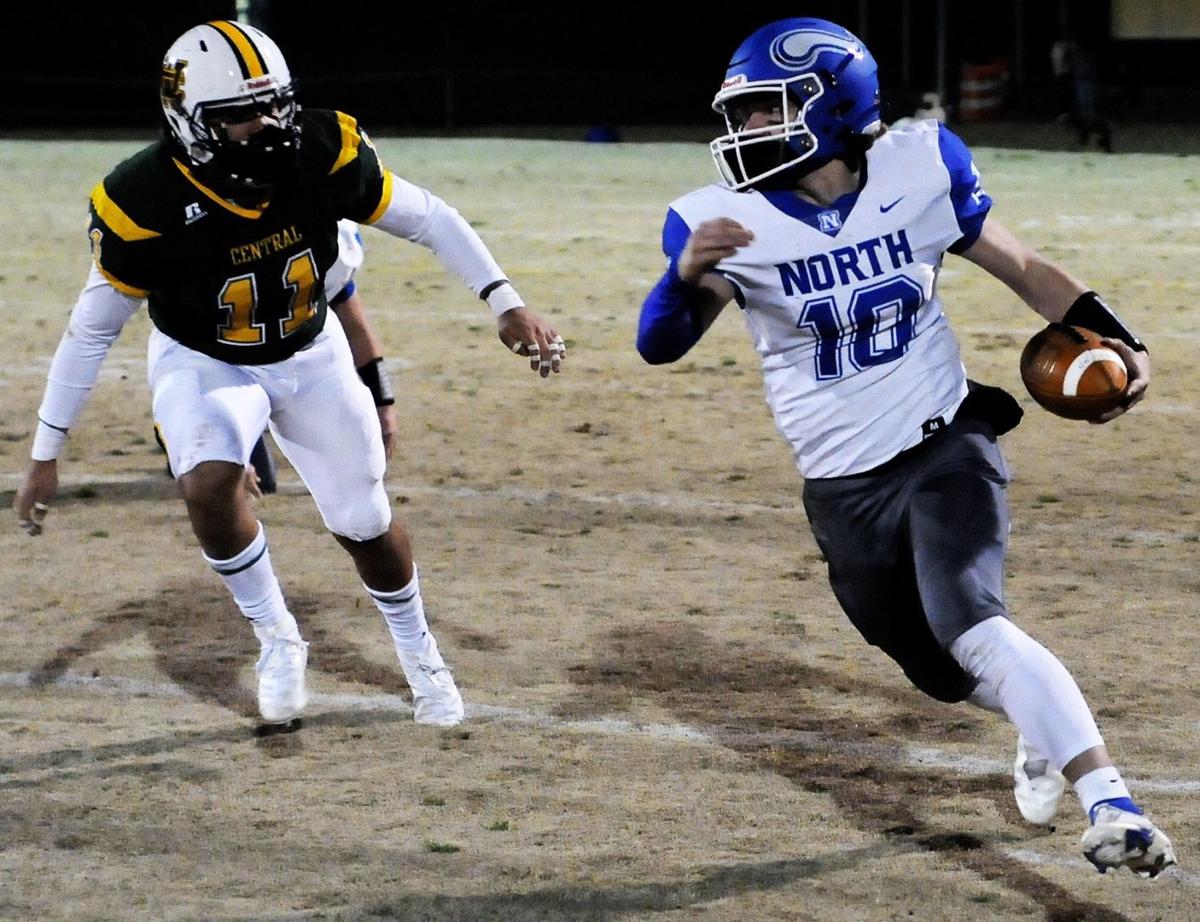 Wilkes Central’s Carlos Reyes-Martin separates from North Wilkes’ Isaiah Rutherford after hauling in a pass from Anthony Graham for a long completion to the 1-yard line in Central’s 34-7 win Friday in Moravian Falls.

A running back who can go between the tackles or around the edge. A dual-threat quarterback. Speedy receivers. A big, experienced line.

Wilkes Central has all the weapons for a complete offensive attack, and those weapons were on full display Friday night.

Morrison, who finished with 169 yards on only 16 carries, was the focal point, but his teammates took advantage of their opportunities as well.

“Obviously, everything starts with JoRaye,” said Eagles’ Coach Ron Turner, whose team improved to 2-0 on the season.

“But as teams have to account for him, and game plan accordingly, things open up for other players. And luckily, we have kids at the skill positions around JoRaye who can also make plays.”

In fact it was Anthony Graham, the sophomore signal-caller, who scored the game’s first touchdown on the second play from scrimmage. And receivers Malachi Rucker and Carlos Reyes-Martin each had over 60 yards through the air from Graham.

“Anthony didn’t play quarterback as a freshman, but had to assume the role after C.J. McGill went down with an injury,” said Turner. “So Anthony is still learning the position. He’s going to get better, but he already has the athletic ability to turn a play into a keeper and go the distance.”

North Wilkes fell to 0-2 on the season despite playing great offensive football between the 20s. The Vikings tallied 20 first downs, double Central’s total, and 315 yards of total offense. But North could only convert 1-of-3 trips to the red zone, and are only 1-of-5 over the course of its first two games.

“We knew they were going to blitz their outside linebackers a lot against us, and so we threw to our inside receivers, on little bubble screens and quick passes to loosen them up,” said North Coach David Wojtecki.

“And those guys did a good job getting three to five yards a pop after the catch. That enabled us to sustain some drives down the field.”

Ben Winters scored North’s first touchdown of the season in the fourth quarter. Facing fourth-and-goal, Wyatt rolled right with the ball on the read-option, and pitched to Winters around the edge. Winters rumbled into the end zone with 1:37 left to play to put the visitors on the scoreboard.

But as North’s methodical ball movement bogged down in the red zone, the Eagles used a multitude of big plays to pull away in the second quarter.

“We controlled the line of scrimmage for most of the game,” said Wojtecki. “But the challenge is they have five or six athletes who are tough to defend once they get into space. So while we were good between the tackles, they made people miss on deep routes and around the edges.”

The first play from scrimmage in the second quarter was an example, when Graham hit Reyes-Martin for a 44-yard completion on a post route. Reyes-Martin was tackled at the 1 by North’s Isaiah Rutherford, but Morrison scored on the very next play to help make it 16-0.

Morrison also was the catalyst for the last drive of the half, busting long runs of 22 and 13 yards on a drive that culminated in a 9-yard touchdown for the senior back on a draw play.

That score made it 28-0 before the intermission, but North Wilkes didn’t back down. On the second half kickoff, returner Tristen Walker broke free for 44 yards, and the next play from scrimmage saw North quarterback Zach Wyatt hit Reese Cleary for 33 yards down the right sideline.

But the Vikings couldn’t punch it in from the 4 on fourth-and-goal, and the ball was turned over on downs.

Still, Wojtecki saw a fight in his squad that he hopes will bode well for the rest of the season.

“We challenged them at halftime to go out and play as hard as they could,” said Wojtecki, “and we went out and won the second half (7-6). We showed a lot of character in the second half, and played better on both sides of the ball.”

Turner, meanwhile, was happy with a Central defense that bent, but did not break. Through two games, the Eagles have allowed only 13 points, a far cry from a group that allowed almost 30 points per game during the 2019-20 campaign.

“Yeah, we didn’t play well a year ago,” said Turner. “But we’re getting there. We had a shutout tonight until the last minute or so, and North Wilkes is a physical, well-coached team. We did some things better than others on defense, but the good news we see how we can improve going forward.”

NOTES: The Graham to Reyes-Martin connection in the second came with some controversy. Reyes-Martin fumbled the ball through the back of the end zone, a possible touchback that would have resulted in the ball going over to North Wilkes. But, after a lengthy huddle, officials ruled Reyes-Martin was down at the 1 prior to the fumble…Winters finished with 98 yards on the ground for the Vikings, and Wyatt had 175 yards through the air…Wyatt’s favorite target was Caleb Souther, who had 10 catches for 55 yards…Central has won seven straight over the Vikings, dating back to 2013…Wilkes Central enjoyed nine plays of at least 12 yards, with three big-play touchdowns of at least 36 yards…Graham finished with 58 yards rushing and 137 yards passing.

Some clouds this morning will give way to generally sunny skies for the afternoon. High 88F. Winds light and variable.

Partial cloudiness early, with scattered showers and thunderstorms in the afternoon. High around 85F. Winds light and variable. Chance of rain 40%.