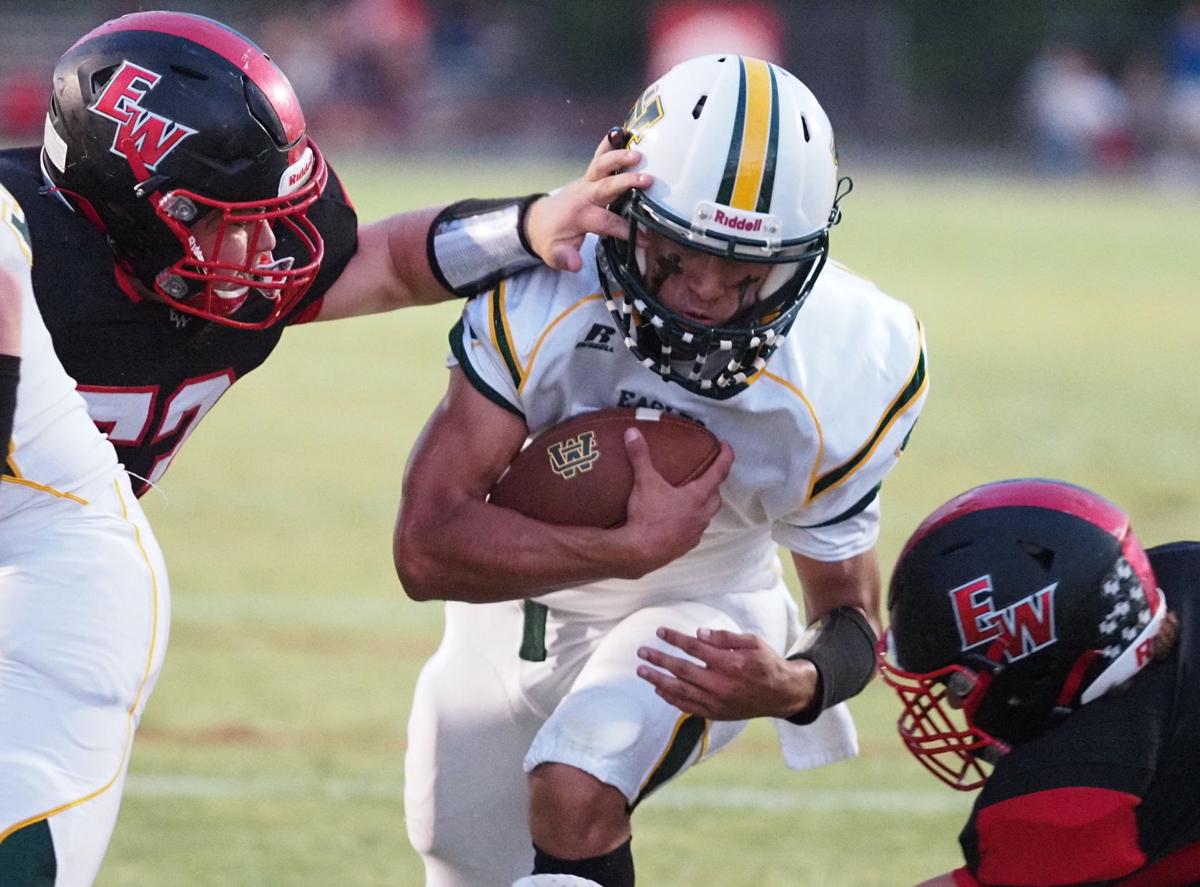 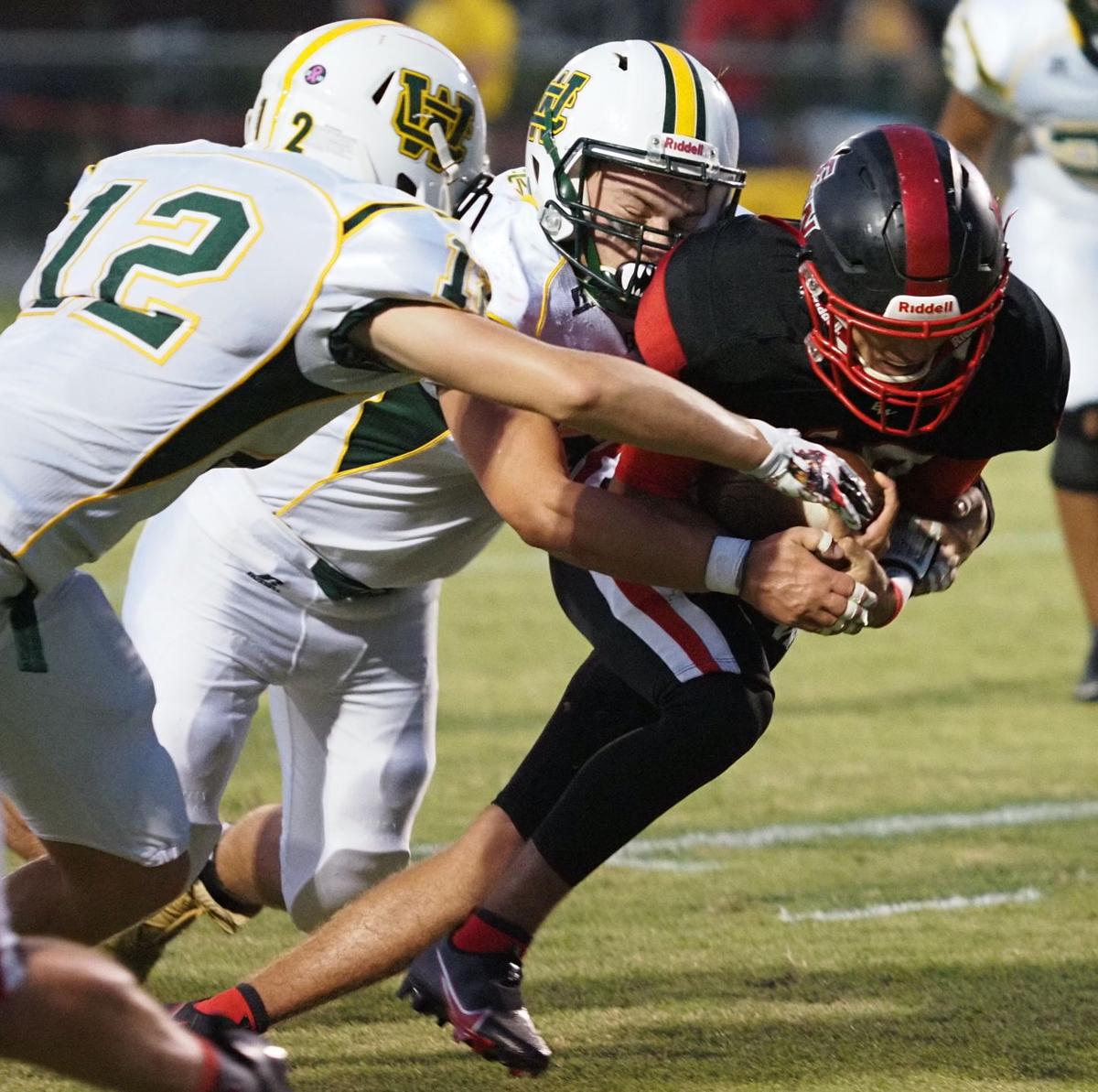 East Wilkes quarterback Briggs Gentry is tackled on this keeper by Wilkes Central’s Jake Perry (52) as Hunter Wyles (12) converges to assist on the stop. 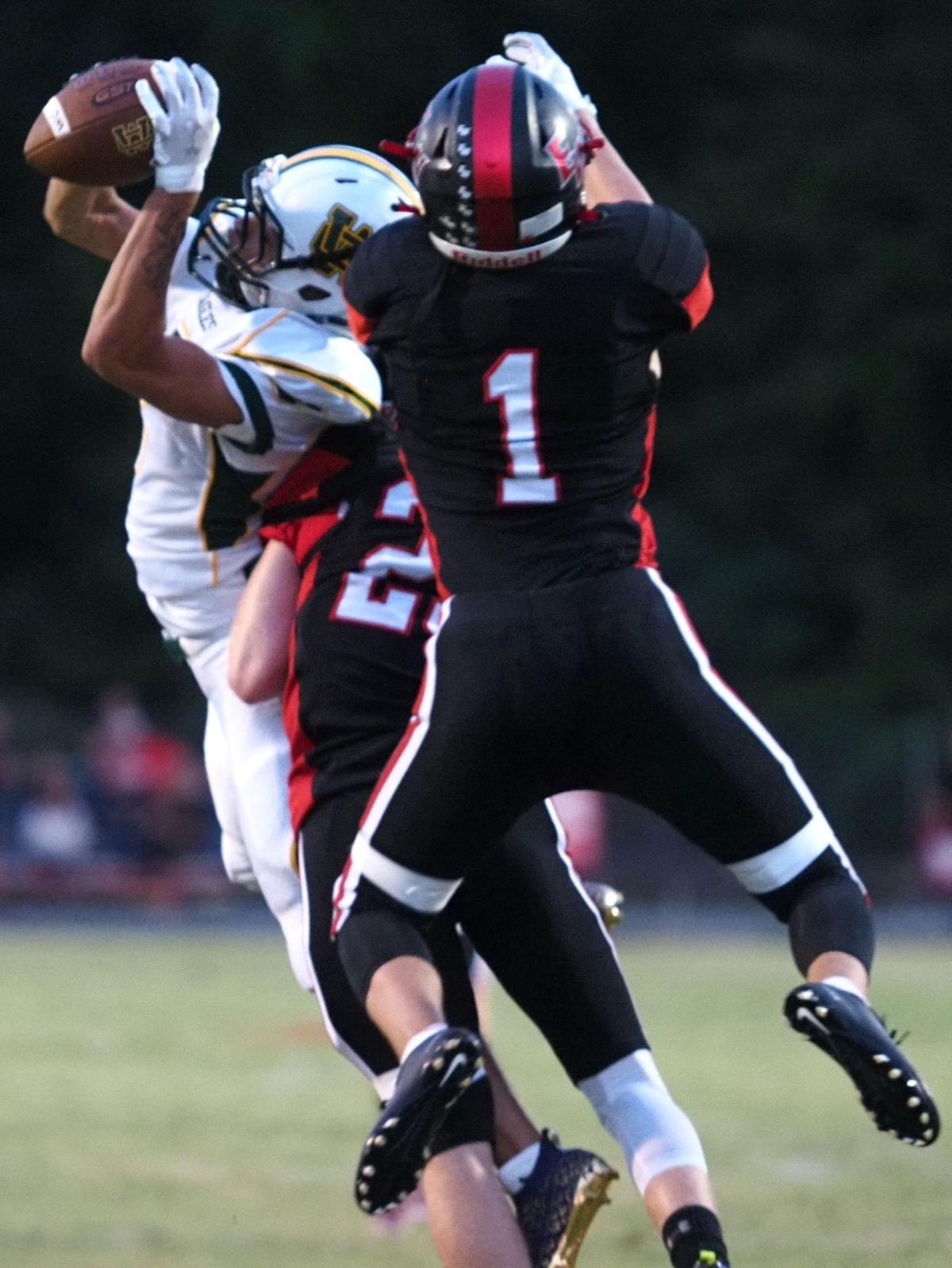 East Wilkes quarterback Briggs Gentry is tackled on this keeper by Wilkes Central’s Jake Perry (52) as Hunter Wyles (12) converges to assist on the stop.

The Eagles got five touchdown passes from junior quarterback C.J. McGill in a 46-20 victory over East Wilkes in Ronda. McGill, a left-handed thrower, completed 10-of-11 passes for 279 yards.

“C.J. really played like I knew he could play,” said Eagle Coach Ron Turner. “He’s still only a year out from having ACL surgery, but he played really well—relaxed and confident. When he’s throwing well, it spreads out the defense and helps out our running game.”

Coming off a two-week quarantine, Central improved to 2-0 in nonleague play while the Cardinals’ mark evened at 2-2 after the club’s second straight loss.

“I was very concerned, having not played for three weeks, but the kids had a good week of practice and were focused and ready to play,” said Turner. “We’ve got some speed and playmakers, and we did a good job of hitting them with explosive plays.”

The Eagles drove 58 yards for a score on their first possession, capped by junior running back A.J. Villalpando’s rush up the middle from the 1-yard line.

Villalpando swept right into the end zone on the two-point conversion, and Central led 8-0 with 7:06 left in the opening quarter.

The key play of Central’s opening possession was a conversion on fourth-and-19 from the 30. McGill connected with Carlos Reyes-Martin down the middle of the field to the 9-yard line.

The Cardinals responded by driving down to the Eagle 6-yard line for first and goal. But a holding penalty, 2-yard rushing loss, and two incomplete passes turned the ball over to Central at the 16-yard line.

“We ended up not scoring and that became a theme in the game,” noted East’s coach, Jonathan Wilmoth. “We did that three times in the red zone, and if you do that and don’t play good pass defense…the result is on the scoreboard.”

The Eagles promptly moved the ball 84 yards for another score. On fourth-and-5 from the East 22, McGill found Carlos Reyes-Martin wide open down the left sideline on a play-action pass.

At 7:54 before halftime, Villalpando rushed right into the end zone for the two-point conversion and a 16-0 Central lead.

“I was pleased with our two early, long sustained drives to keep our defense off the field in the first half,” noted Turner.

East answered back with a scoring drive of its own, a 71-yard series capped by Briggs Gentry’s 30-yard touchdown pass in stride to Titus Miller on third-and-goal at 1:40 before the break.

Weston Brown’s two-point conversion run made it 16-8 at 1:40 before the break.

But the Eagles struck back quickly, with McGill firing to senior Malachi Rucker on the left flank. Rucker cut to the middle and then outran the defenders into the end zone for a 56-yard touchdown with 54 ticks left in the first half.

“They made a lot of big plays,” noted Wilmoth. “We need to finish our drives and cut down on the dumb penalties. We’re not playing very good right now and performing as we can. We’ve got to do a better job as coaches and players because on Friday we’re playing the best team (Mount Airy) we’ve seen this season, and we’ve got to be prepared.”

On the two-point conversion, McGill’s keeper up the middle made it 24-8 at halftime.

On East’s first possession of the second half, a 52-yard drive stalled at the Central 8, as Gentry’s fourth-down pass to Eric Adams in the end zone was dropped.

Then the Eagles marched 92 yards for a gut-punch score. From the East 20, McGill hooked up again with Rucker, who got free on the left sideline, slipped a few would-be tacklers and raced into the end zone with 4:19 left in the third quarter.

The two-point conversion pass fell incomplete, leaving it 30-8 in favor of the visitors.

After the Cardinals lost fumbles on back-to-back possessions, McGill connected on another long bomb, this time to senior Terry Hayes for 42 yards. Hayes was wide open down the right sideline with 11:25 left in the game.

Villalpando’s two-point conversion run made it 38-8.

Gentry delivered a pinpoint throw to junior Ethan Cass—playing his first game after a two-week quarantine—over the middle for a 23-yard touchdown with 10:41 remaining. Gentry was stopped short on the conversion run, leaving it 38-14.

“We did give up some yards but we stayed away from their explosive plays,” said Turner. “Our defense was bending but not breaking, then we stiffened up and played well in the red zone.”

Central’s air attack continued on the next series, with McGill notching an 85-yard strike to sophomore Hunter Wyles. Wyles caught it near midfield but then broke some tackles and raced to paydirt.

The two-point conversion run by Villalpando increased the Eagle lead to 46-14 with 9:06 left in the contest.

East tacked on a final score after Brody Martin rushed right for a 3-yard touchdown with 7:12 to play. “Brody played extremely hard and we ran the ball well all game,” added Wilmoth.

Junior Aydan Bynum led the Eagles with 98 yards on only four rushes. Villalpando had 13 carries for 51 yards and a score.

After matching the club’s 2-0 start from last season, the Eagles hold a 13-5 advantage in the series with East Wilkes since 2004, including wins in five of the last six matchups.

Central will host North Surry at 7:30 p.m. Friday. It’ll be homecoming and the Foothills 2A Conference opener for the Eagles.

North Wilkes celebrated homecoming with a 47-40 win over Alleghany, Friday night in Hays.

The Vikings (1-1) trailed 33-26 before reeling off the next 21 points on three rushing scores and PATs to seal the nonleague victory over the Trojans (1-2).

“We showed a lot of heart all game and never gave up,” noted North’s coach, David Wojtecki, whose club rushed for 358 yards.

Senior Viking quarterback Zach Wyatt had rushing scores of 14 and 15 yards and passed for a 4-yard touchdown. He had 105 yards total on the ground.

Viking junior running back Deandre Corpening rushed for 214 yards and three touchdowns, including scoring jaunts from 46 and 22 yards out.

Alleghany’s Blake Proffit rushed for a 67-yard touchdown to break the 26-all score at halftime. The point-after kick spotted the Trojans a 33-26 lead just a minute into the second half.

A steady rain in the evening. Showers continuing late. Low 53F. Winds WNW at 5 to 10 mph. Chance of rain 70%. Rainfall near a quarter of an inch.

Certain feeling this time of year

A matter of personal rights