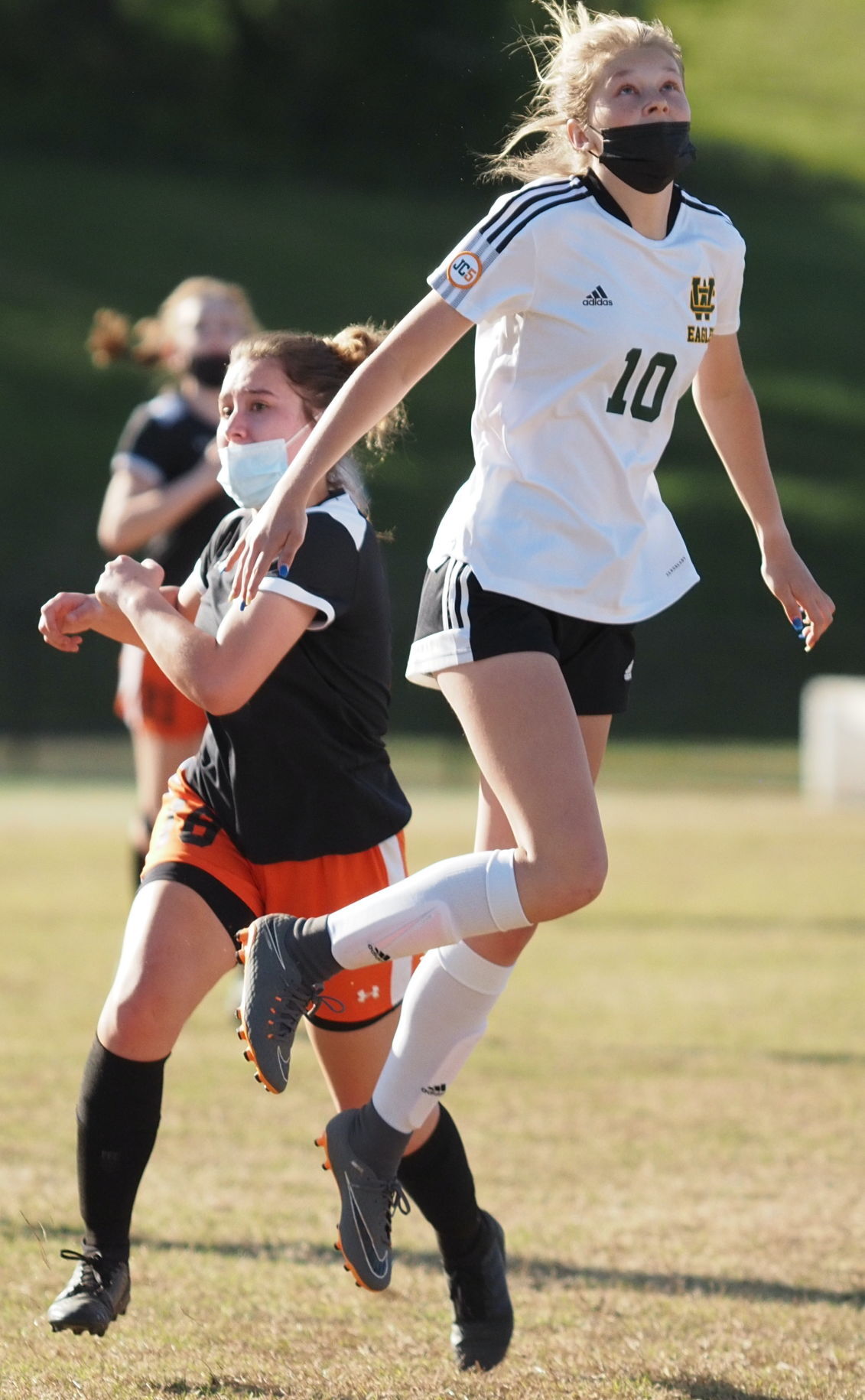 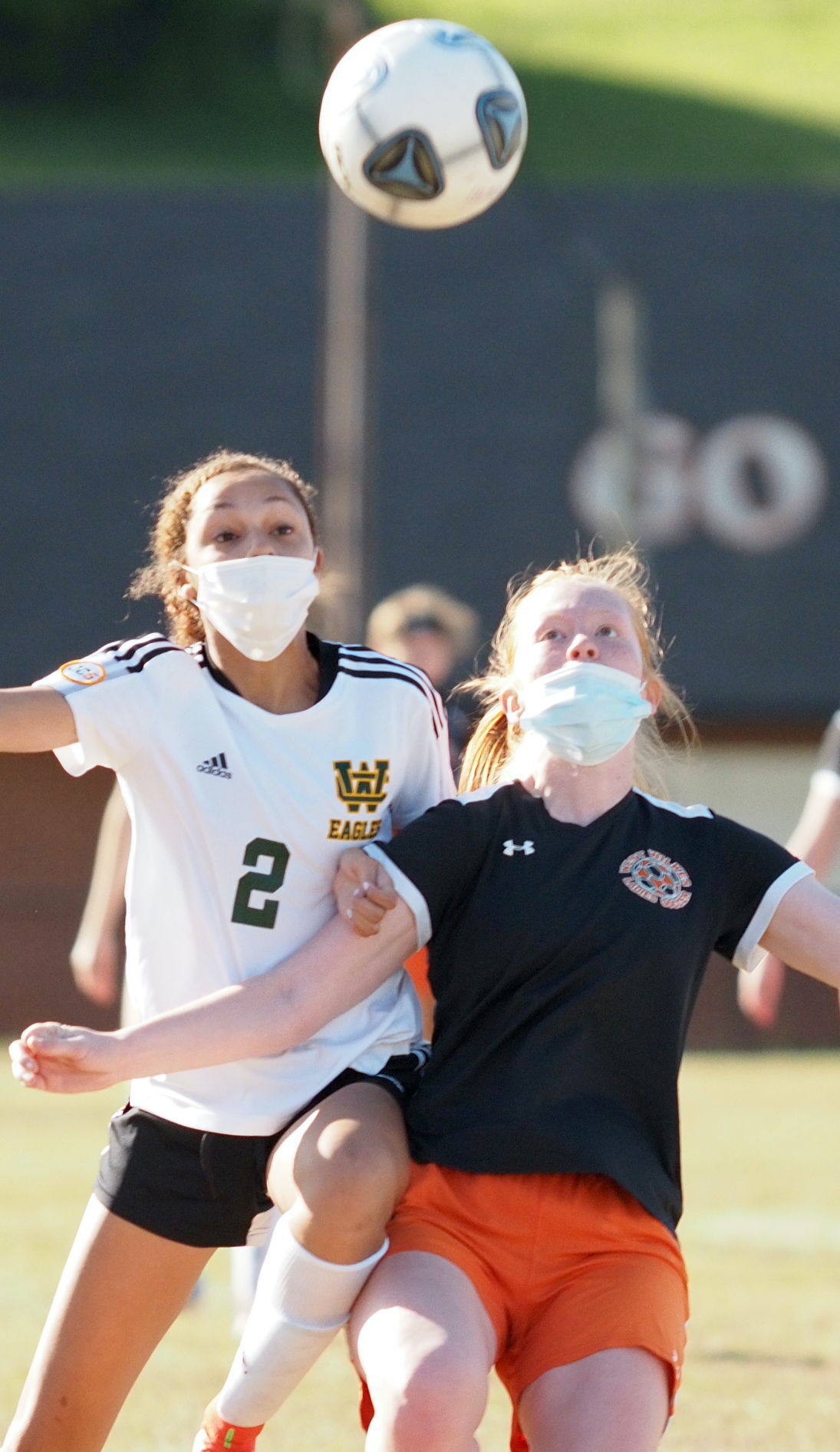 Wilkes Central sophomore Lydia Mayes (2) and West Wilkes junior Brooke Greene battle for control of the ball Thursday. Mayes had a goal in the Eagles’ 9-0 victory in Millers Creek. 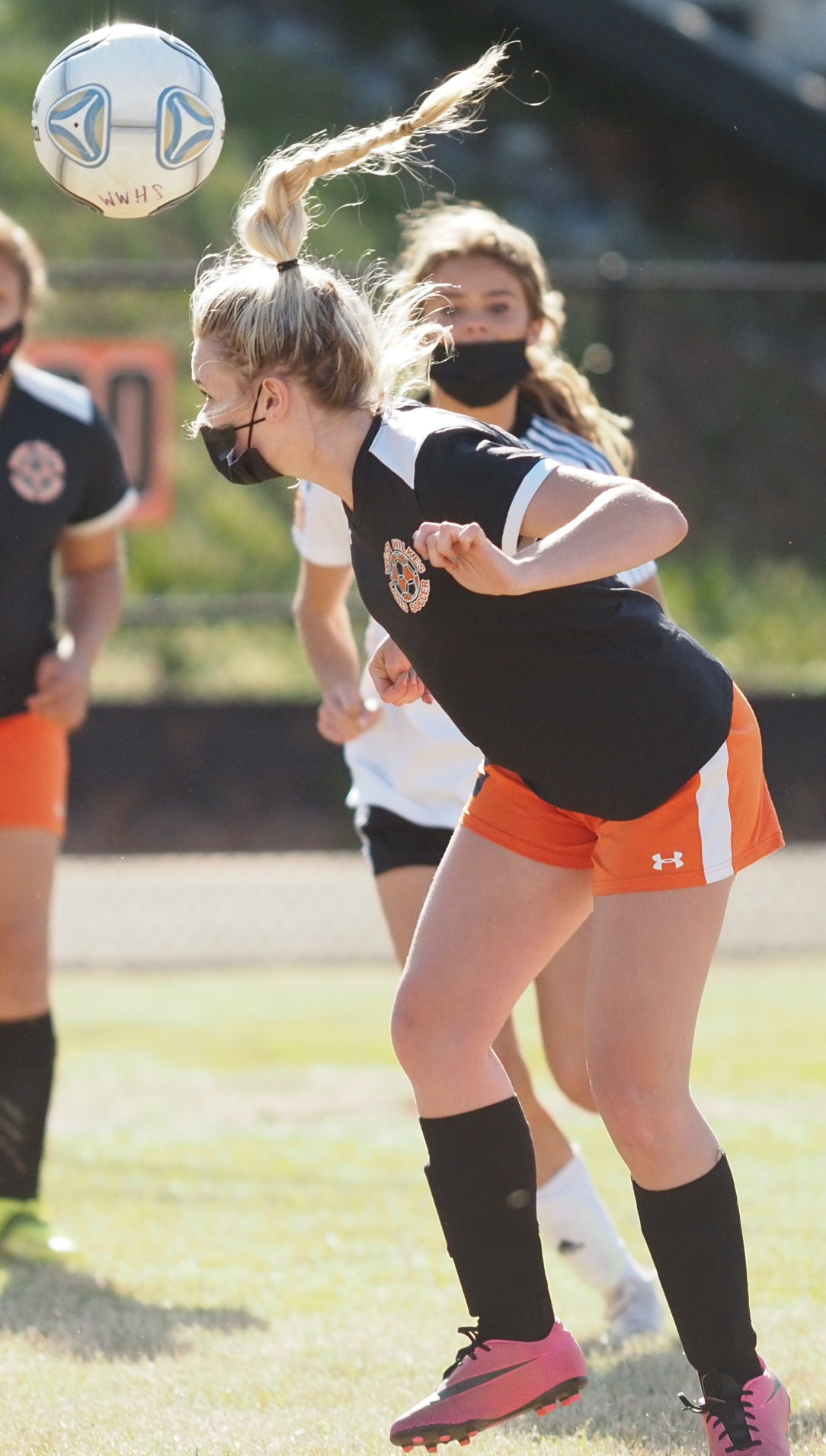 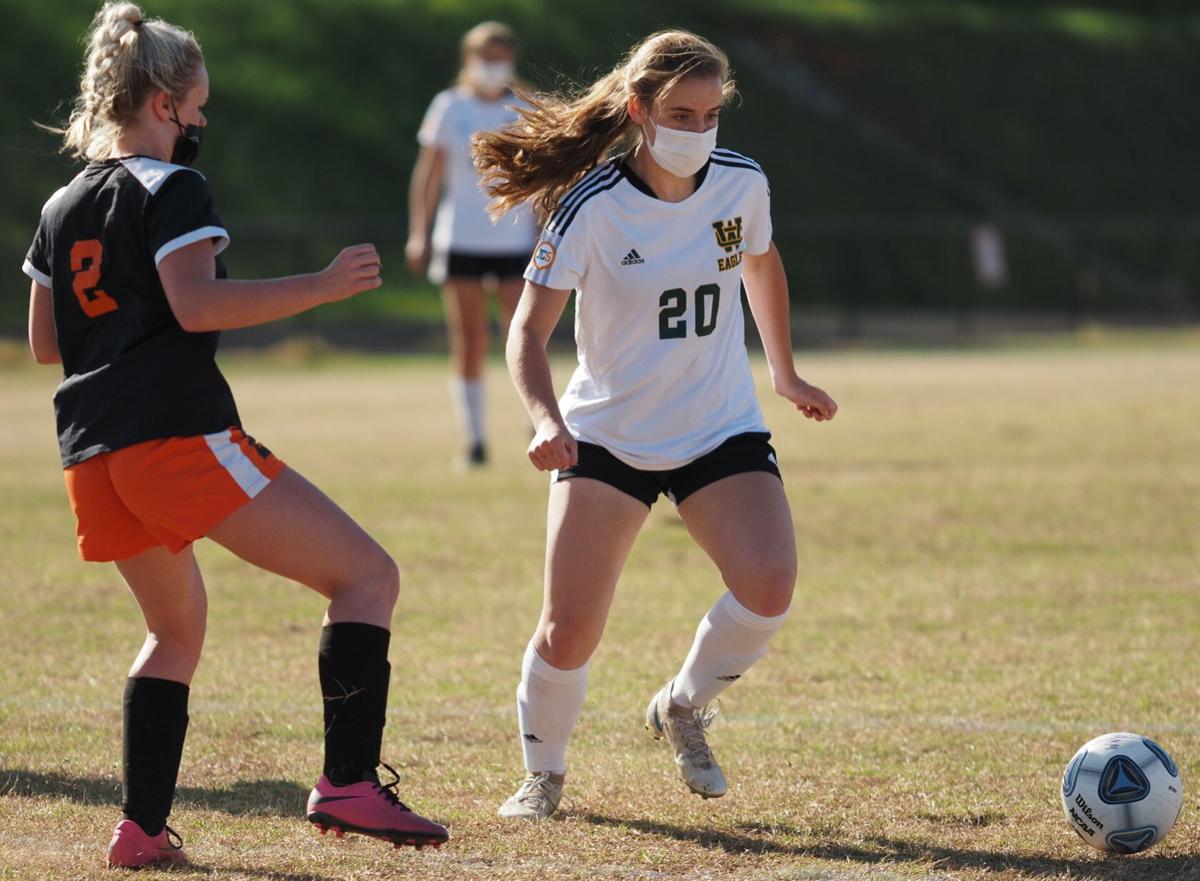 Wilkes Central’s Makenna Freeman (20) moves the ball into scoring position Thursday as West Wilkes’ Jamesyn Bell keep pace on the play. Freeman had a pair of goals in Central’s 9-0 shutout of the Blackhawks. 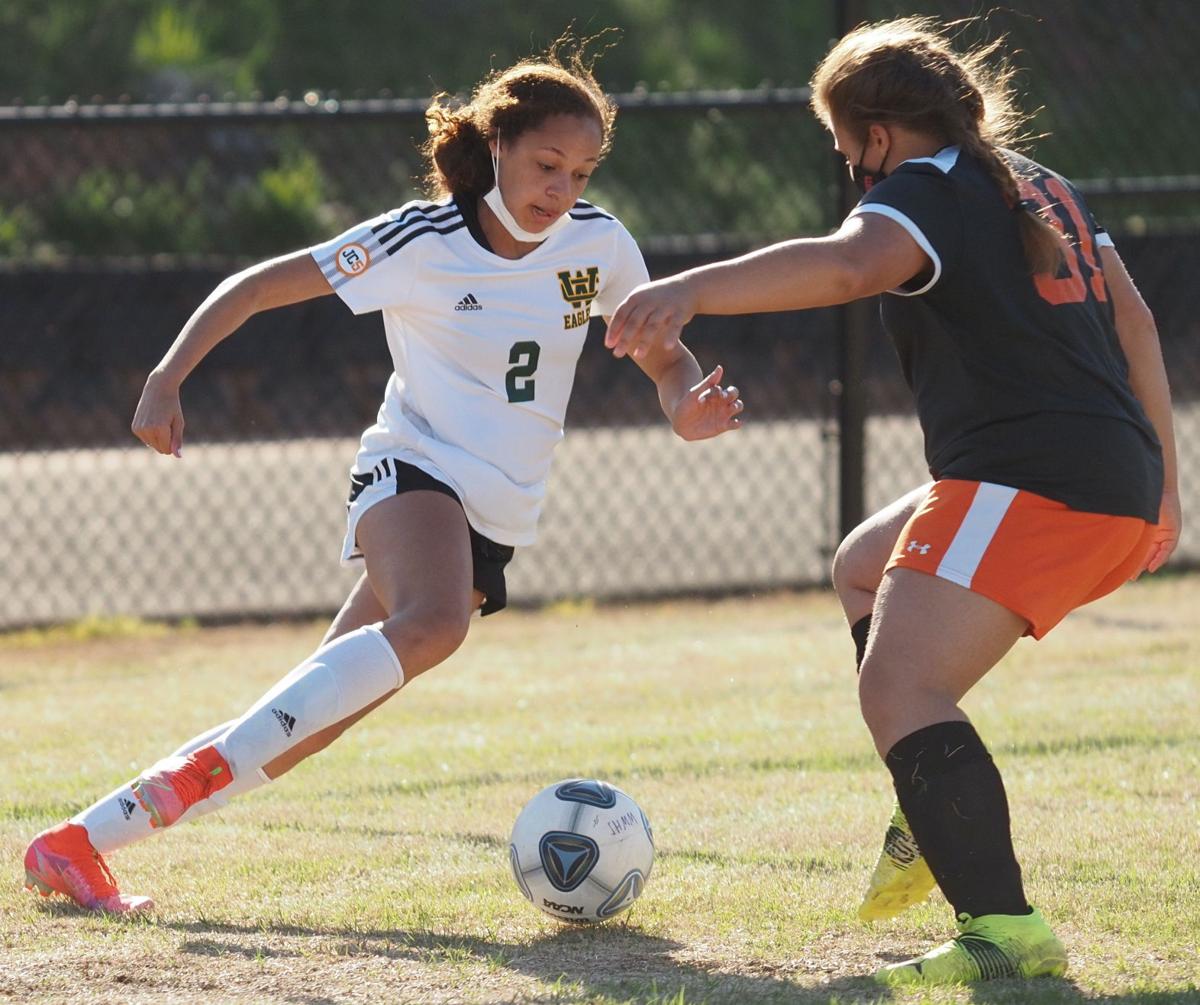 Wilkes Central sophomore Lydia Mayes (2) and West Wilkes junior Brooke Greene battle for control of the ball Thursday. Mayes had a goal in the Eagles’ 9-0 victory in Millers Creek.

Wilkes Central’s Makenna Freeman (20) moves the ball into scoring position Thursday as West Wilkes’ Jamesyn Bell keep pace on the play. Freeman had a pair of goals in Central’s 9-0 shutout of the Blackhawks.

It was only 10 minutes on the pitch, but it must have seemed like an eternity to the West Wilkes soccer team.

In that early stretch Thursday in Millers Creek, Wilkes Central erupted for seven goals en route to a convincing 9-0 win over the host Blackhawks.

The Mountain Valley Athletic Conference contest ended after 40 minutes of play due to the league’s nine-goal-advantage rule.

Unchallenged Central is 9-0 and have outscored their opponents 93-0 in 2021. The Eagles have won 13 straight matches overall and 30 consecutive in the MVAC.

“This was a good opportunity for us to work more players into the game and see how our full roster performs under pressure and how they’re learning to work together,” said Central Coach Matt Matthews. “We were pleased to see similar ball development, crosses and shots coming from our athletes. It is a real blessing to be as deep as we are where we don’t have the major concern of quality losses with certain parts of our roster.”

Junior Zoe Susi and freshman Anna Rollins each assisted on a pair of goals.

The fast and furious scoring began just two minutes and 17 seconds after the opening whistle, as freshman Addisen Freeman scored on a ball from the left side that hit the crossbar before caroming into the net.

Less than a minute later, Lowe connected from about 20 yards out on the right flank.

At the 36:10 mark, Makenna Freeman scored, assisted on the play by Rollins. Rollins kicked in the next winner, on a ball that worked right to left, with 32:04 left, making it 4-0.

Lowe then scored again from about 20 yards out, and the Eagles led 5-0 with 28:30 remaining in the half.

A left corner kick from Lowe somehow found its way into the net with 27:42 to play, spotting the visitors a 6-0 advantage.

Susi netted the next goal, at the 27:23 mark, on a well-placed assist by Rollins.

About 16 minutes later, sophomore Lydia Mayes found the back of the net, off an assist from freshman Faith Reeves, making it 8-0.

Makenna Freeman scored again with just over six minutes left in the half, assisted on the play by Susi. That goal completed the scoring.

“We see a bright future ahead while we push each other harder and harder in training on a daily basis,” said Matthews. “This is where it happens, when there are no stats, no photographers and no fans, and thankfully this is where they work the hardest.”

Morgan Wood made 15 saves in goal for the Blackhawks. Emma Golds attempted West’s only shot on goal.

The Blackhawks, coming off back-to-back overtime wins, fell to 5-2-1 in the MVAC.

The team’s only outright losses of the season have been at the hands of Central.

Prior to the game, West Coach Wesley Golds paid tribute to Jim Caudill, the former coach at West and Central who died on April 23, 2020.

“It was a very nice moment reflecting on the gifts, time and sacrifices that Coach Jim Caudill made to both programs and Wilkes County soccer over the years,” Matthews said. “Thanks to Wesley and West for taking the time to acknowledge and recognize Jim’s efforts and accolades here in the county.”

Ashe County shut out North Wilkes, 5-0, in Hays on Thursday.

Ashe’s Jernee Ashley scored twice and assisted on another goal for the Huskies, who improved to 8-2.

The Vikings slipped to 0-9 on the camoaign.

Morgan Phipps had a goal and two assists for the Huskies, who led 3-0 at the break. Jayden Jones and Jenzik Martin also scored while Claudia Acevedo assisted on two goals.

West Wilkes edged host Elkin in overtime, 2-1, on April 13, in a battle for third place in the MVAC.

After a scoreless first half, West struck first on junior Brooke Greene’s goal with 31:27 left in the second half. Sophomore Ivy Bledsoe assisted on the score.

Elkin tied the match with a goal from junior Chandler Beals that came with 9:08 remaining to play in regulation. With less than a minute left in the first 10-minute overtime session, senior Gracie Lambert made a long cross to the right side of the pitch that found Greene streaking ahead of the Elkin defense.

It was West’s second straight win in OT by a 2-1 margin. The Blackhawks knocked off Ashe County under the same circumstances on April 7.

Alleghany emerged with a 1-0 decision over North Wilkes in Hays on April 13. The Trojans, coming off 10 days of quarantining, moved to 2-6 with the season sweep of the Vikings, who are winless in eight matches.

The East Wilkes soccer team will be eligible to return to play on Friday after completing 10 days of COVID-19 quarantining.

The Cardinals are next scheduled to host Ashe County on Tuesday.

Cloudy with showers. Low around 45F. Winds light and variable. Chance of rain 50%.