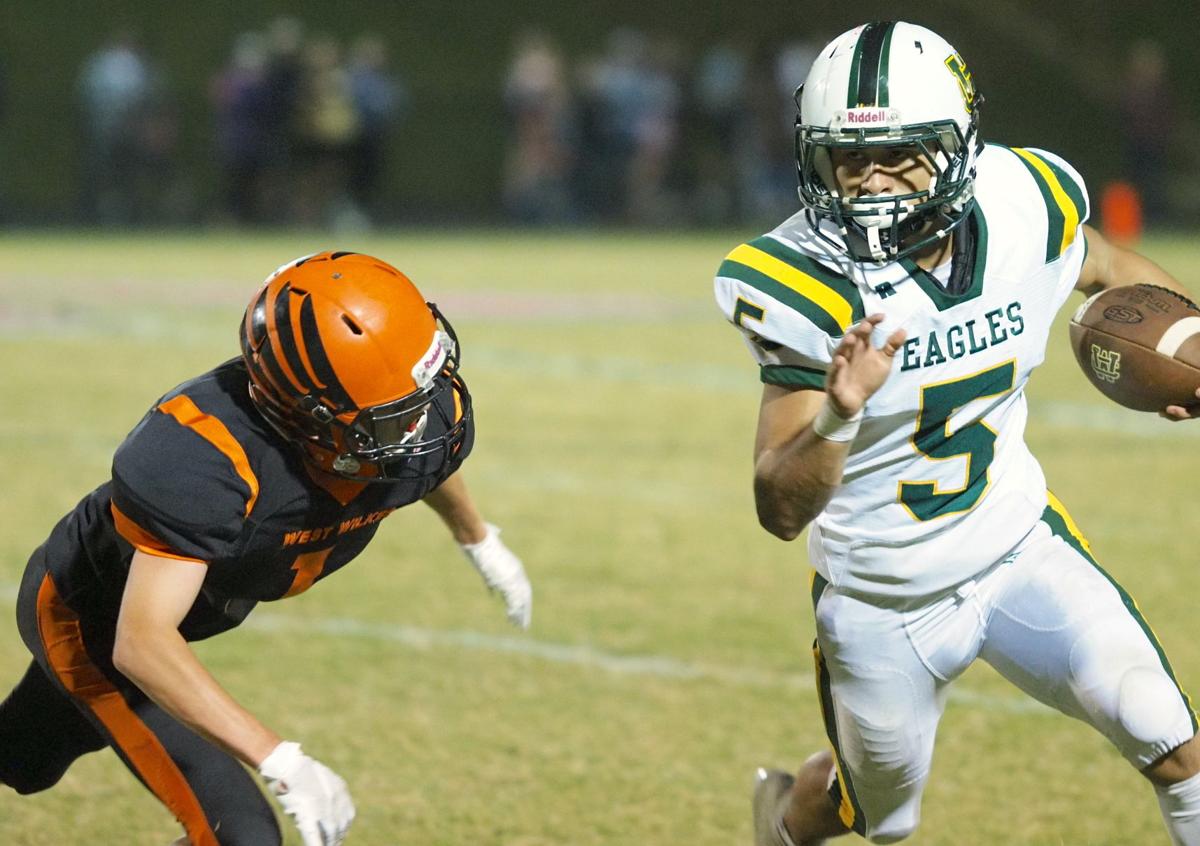 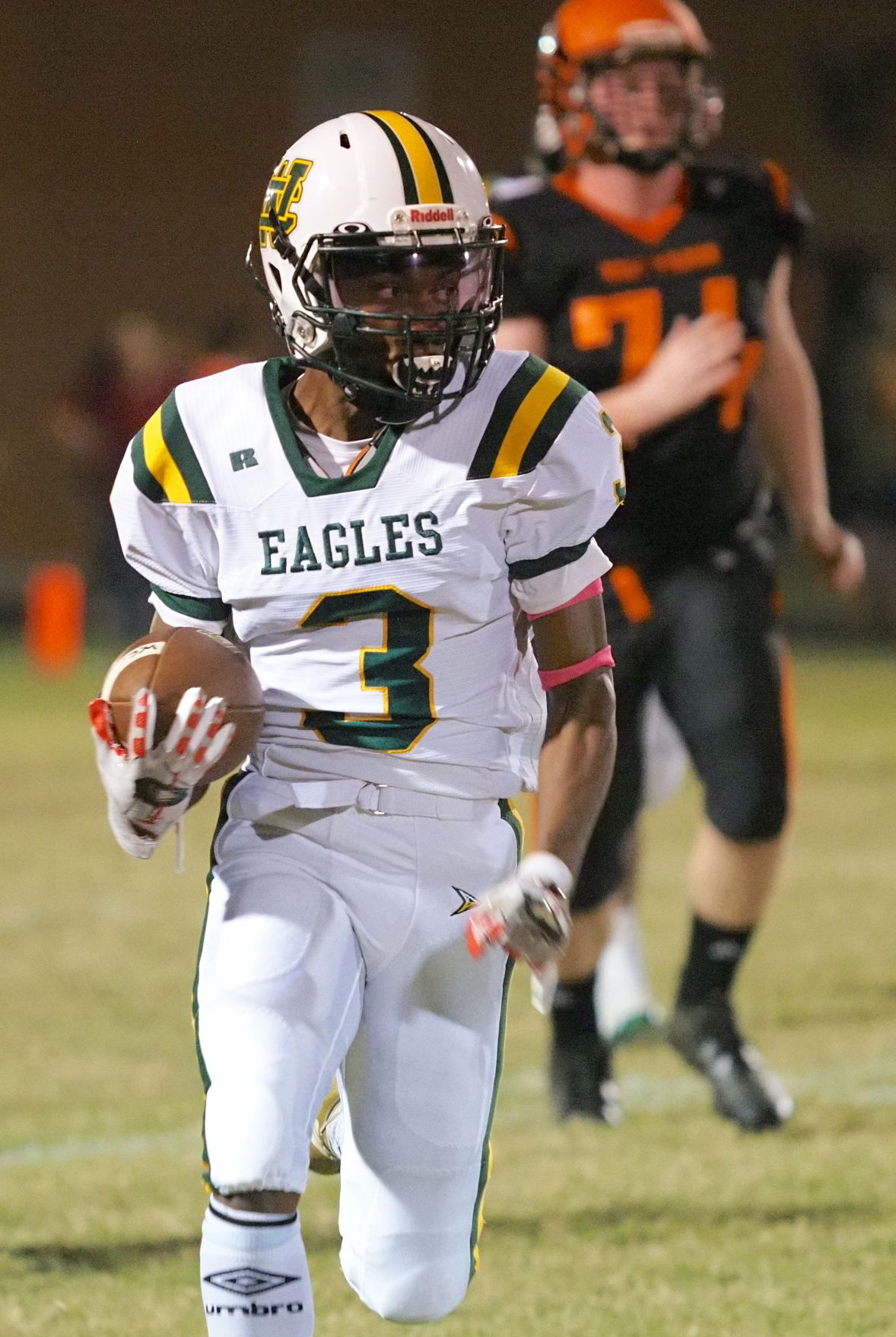 Wilkes Central senior Terry Hayes, here sprinting upfield with West’s Landon Gambill in pursuit, had a pair of touchdown catches in the Eagles’ 36-0 shutout of the Blackhawks in Millers Creek on Friday.

Wilkes Central senior Terry Hayes, here sprinting upfield with West’s Landon Gambill in pursuit, had a pair of touchdown catches in the Eagles’ 36-0 shutout of the Blackhawks in Millers Creek on Friday.

It was Central’s 15th straight victory over West, and third shutout during that span. The Eagles evened their overall mark at 3-3 with their first win in four Foothills 2A Conference games this season.

“Our kids played very hard and were focused and had a lot of energy,” said Eagle Coach Ron Turner. “Defensively we played really well and offensively at times we played well.”

The Blackhawks, beset by injuries like the Eagles, slipped to 1-5 overall and 1-4 in league play.

“I was proud of the way we fought for three quarters,” said Phil Collett, West’s coach.

The Blackhawks surprised the Eagles by recovering an onside kick on the first play of the game. After sophomore Jett McNeill made the recovery at the Eagle 40-yard line, West moved deep into the red zone.

As he neared the goal line, West’s Braden Woodie was met by Central’s Aithan Allen and fumbled the ball, which was recovered in the end zone by the Eagles.

After taking over at the West 20, a 75-yard touchdown run by Terry Hayes was negated by a holding penalty. On the same drive, with the Eagles facing fourth-and-5 from the West 39, Zach Absher deflected a Central pass and the hosts regained possession.

“We struggled offensively in the first half, shooting ourselves in the foot,” noted Turner.

West again marched into scoring territory, as junior quarterback Travis Walsh connected with Luke Tharpe for 37 yards down the right sideline on third-and-7 from their own 43.

But on fourth-and-3 from the 13, West’s fumbled snap exchange was recovered by the Eagles at the 16.

“The first (fumble) definitely took some wind out of our sails, but the second fumble in the red zone perhaps even more so,” said Collett.

A big run and pass completion to Hayes moved the ball quickly from the 16 to the West 25-yard line. From there, A.J. Villalpando took a handoff, started to the middle then cut left into the end zone. The junior running back also made good on the two-point conversion run with 7:38 left in the second quarter.

On West’s next possession, on fourth-and-4 from the Eagle 31, Walsh was flushed out of the pocket and was stopped by Central’s Jake Perry short of the first down. After the turnover on the downs, the Eagles took over at their own 35 with 1:49 before halftime.

A big run by Villalpando down the left sideline on third-and-2 moved the ball to the West 19-yard line, and a completion to Malachi Rucker spotted the ball at the 6. From there, quarterback C.J. McGill rolled left and found Hayes in the left corner of the end zone.

With 27.4 seconds left in the first half, the Eagles were stopped short on the conversion run but entered the locker room with a 14-0 lead.

“That touchdown drive right before the half was big,” noted Turner. “That gave us energy going into halftime.”

On West’s first possession of the second half, Central’s Jaden Parker intercepted a Walsh pass and the Eagles drove 69 yards for another score, capped by Villalpando’s 12-yard run straight up the middle. The conversion run came up just short, leaving the score 20-0 with 6:20 left in the third.

In the final quarter, the Eagles added a 71-yard touchdown pass from McGill to Hayes, plus a Villalpando conversion run, and a 23-yard and two-point conversion runs by Aydan Bynum, the culmination of an Isaiah Graham interception.

After the Bears rushed for a touchdown in the opening quarter, the Cardinals responded with a 30-yard field goal by Doug Porter with three minutes left in the period.

Mount Airy rushed for another score midway through the second quarter, but again Porter answered with a 15-yard field goal three minutes before halftime.

“We played with them in the first half,” noted East Coach Jonathan Wilmoth. “But we couldn’t get it into the end zone when we were inside the 5 three times — if we could have punched those in we’d have got them on their toes more than we did.”

The Bears added a ground score just a minute before halftime and outscored the hosts 26-0 in the second half.

“I was pretty proud of how our kids came out and stepped up to the plate and battled,” added Wilmoth.

The Golden Eagles, atop the Foothills 2A Conference alongside East Surry, got four touchdowns in the second period to break a 7-7 tie after a quarter of play.

“We battled with them in the first quarter, but it’s hard to match a team when you have seven starters out,” said North Coach David Wojtecki.

Surry Central scored in the second on a 30-yard touchdown throw from Avery Wilmoth to Dakota Mills, a 34-yard run by Karson Crouse, an 11-yard scamper by Brian Williams and an 11-yard pass from Wilmoth to Memphis Bolatto.

The hosts padded the 35-7 lead at halftime with a 5-yard scoring run by Crouse and a 46-yard field goal by Jacob Edmonds in the third.

The Vikings put more points on the board in the fourth, following a 1-yard run by Deandre Corpening and another 1-yard jaunt by Zach Wyatt on the final play of the game.

North tied it in the first on a 2-yard touchdown run by Corpening. Crouse opened the scoring with a 4-yard run for the hosts.

The Cardinals found the end zone in every quarter of the contest. Briggs Gentry threw two touchdown passes in the first half, connecting with Ethan Cass in the first quarter and Eric Adams in the second period.

“It was a good game with a one-day turnaround — we had one day of practice to prepare” for the Vikings, noted East Coach Jonathan Wilmoth. “Our defense played well for four quarters. Offensively we were stagnant at times but played well enough to put some points on the board.”

The Cardinals evened their overall marks at 4-4 overall and 2-2 in Northwest 1A play. The Vikings, after the senior night setback, fell to 4-5, 1-4.

Sunshine along with some cloudy intervals. High around 50F. Winds light and variable.

A few clouds from time to time. Low 39F. Winds light and variable.

A few clouds from time to time. Low 43F. Winds light and variable.

A few clouds from time to time. Low 42F. Winds light and variable.

Having an attitude of gratitude

What is cause of increase in violence?

Lack of trust a foundational factor

Thanks for saving magnificent oak tree