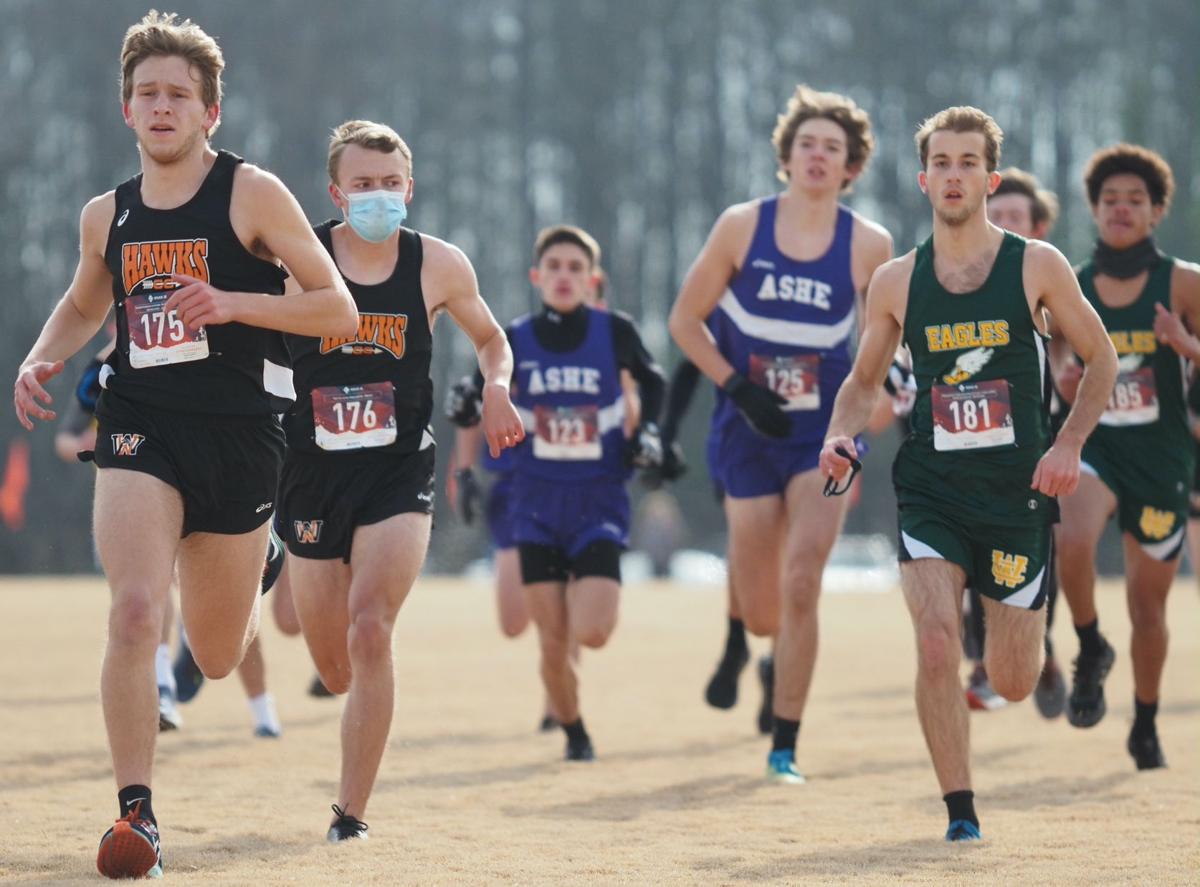 West Wilkes’ Austin Triplette (175) sets the pace at the start of the MVAC championships on Saturday in Millers Creek. Wilkes Central’s Jadon Gage (181) would eventually take the lead from Triplette and coast to victory. West’s Hunter Wayne (176) keeps an eye on Gage en route to a fifth-place finish. 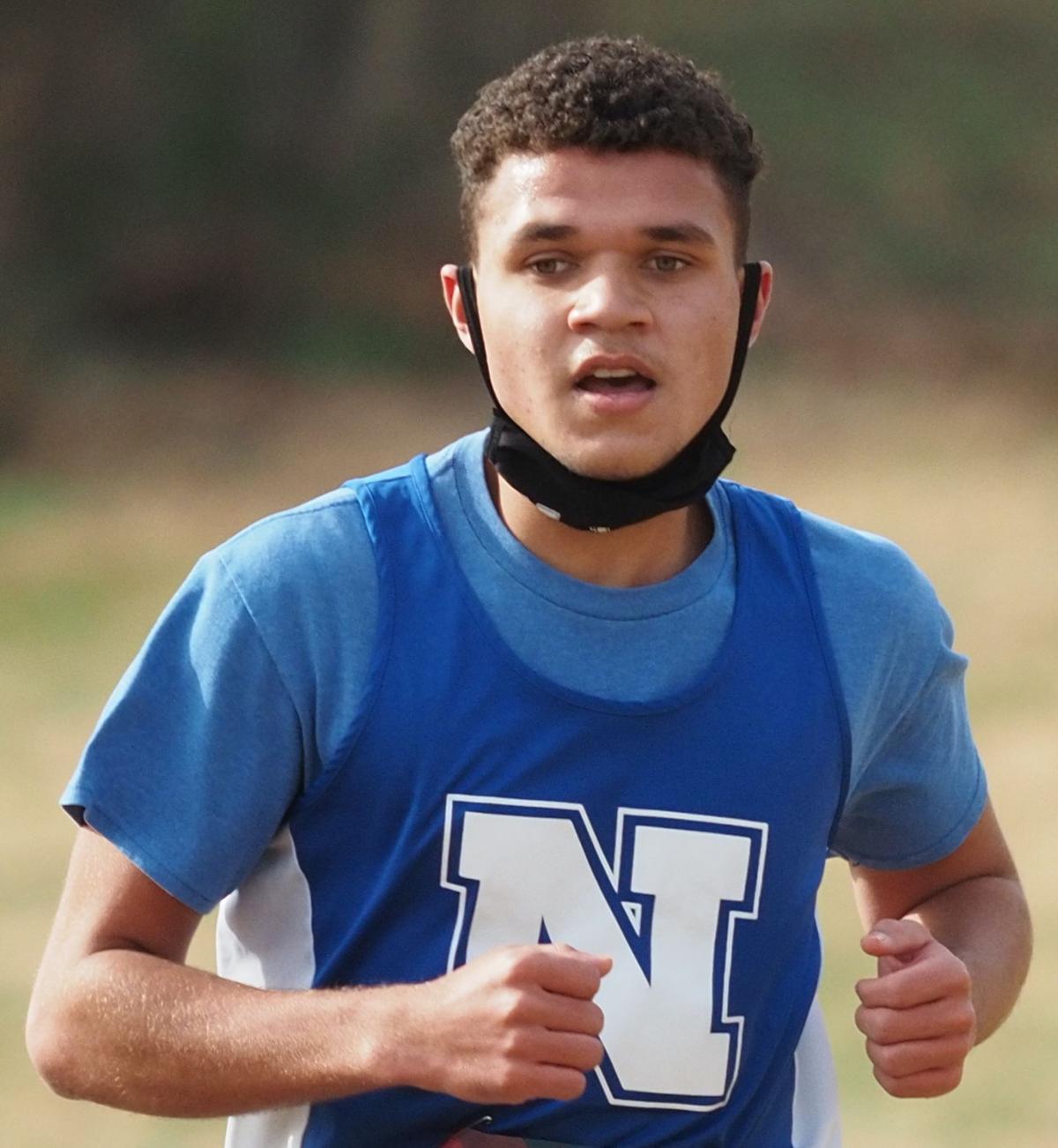 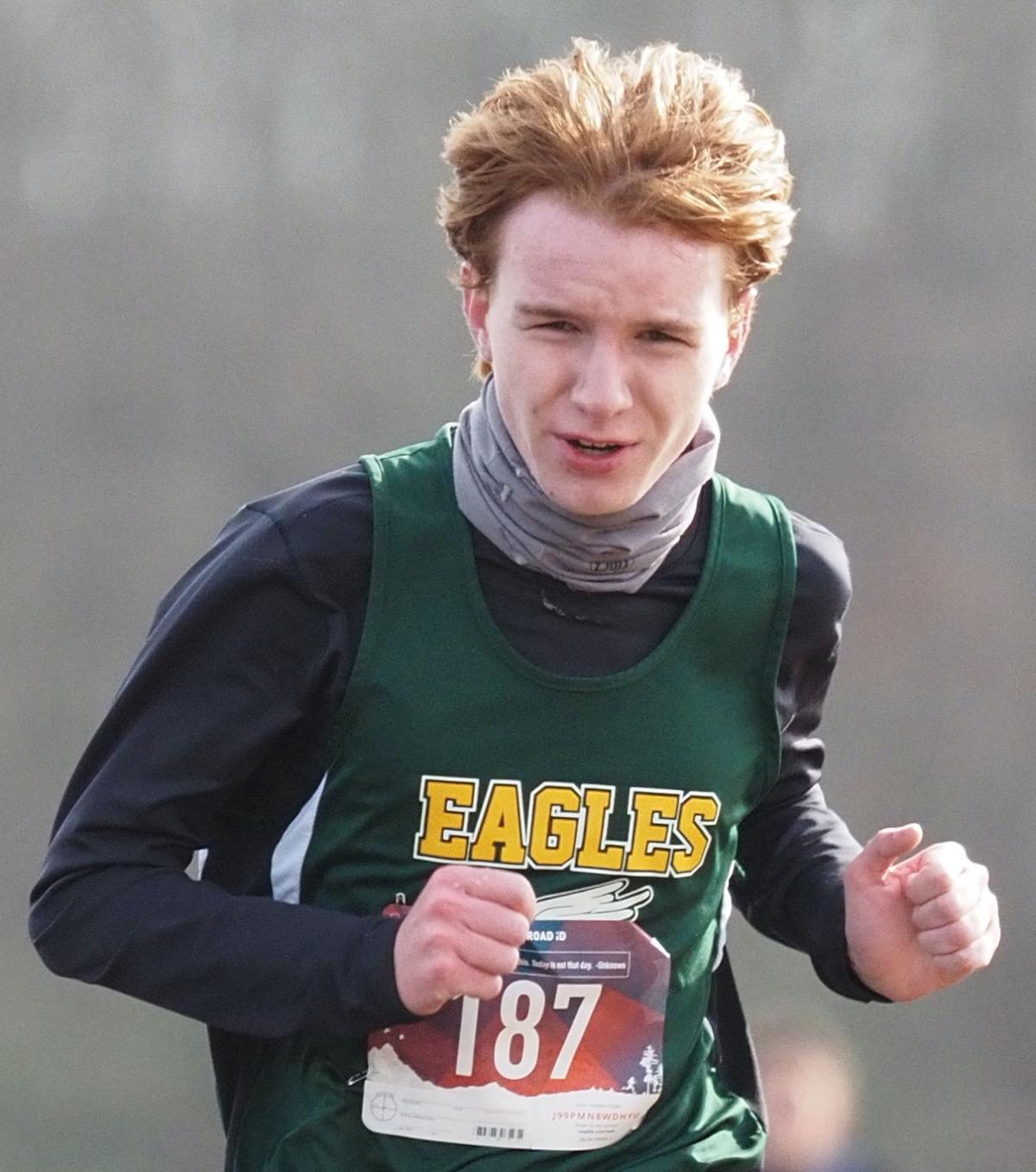 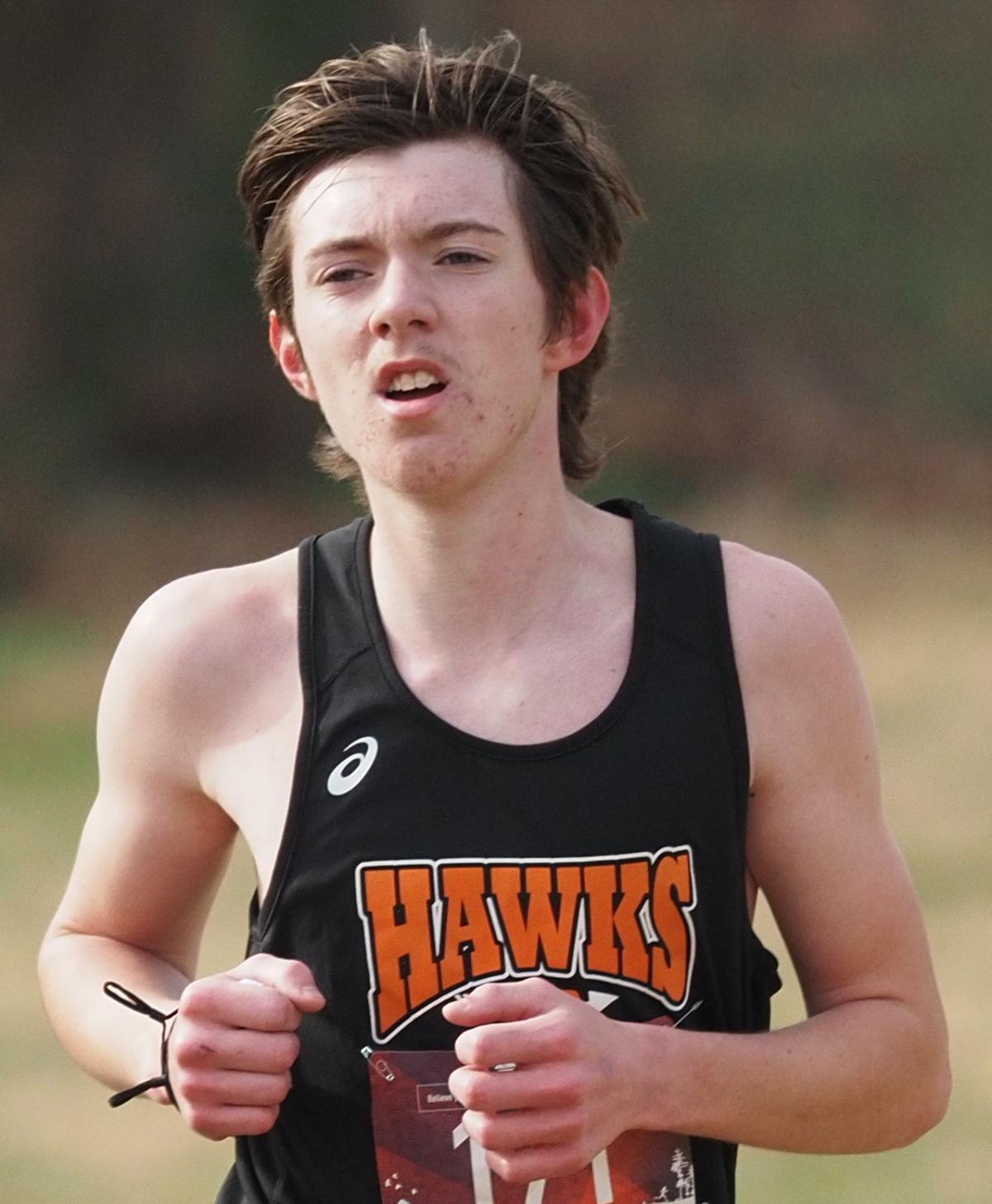 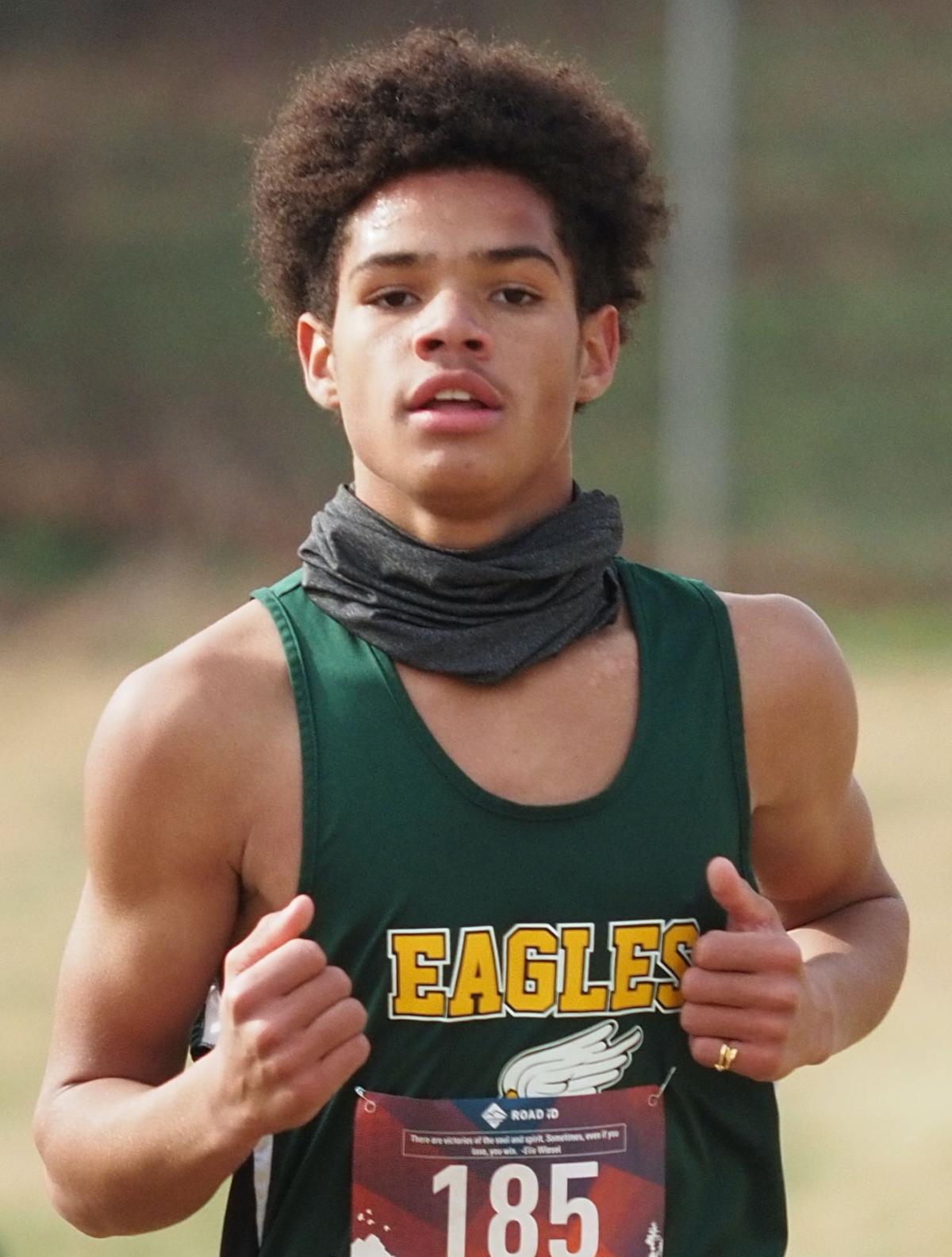 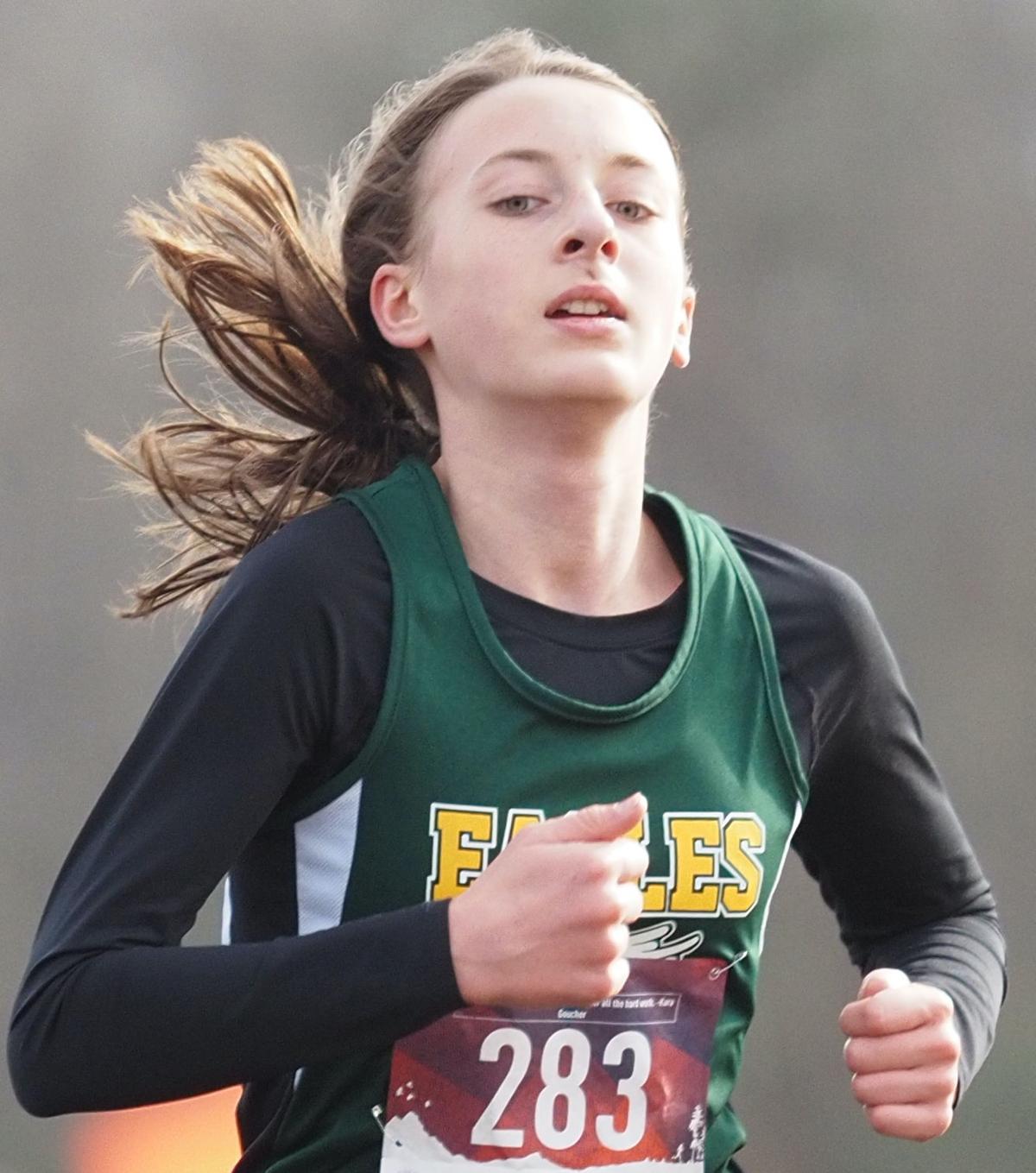 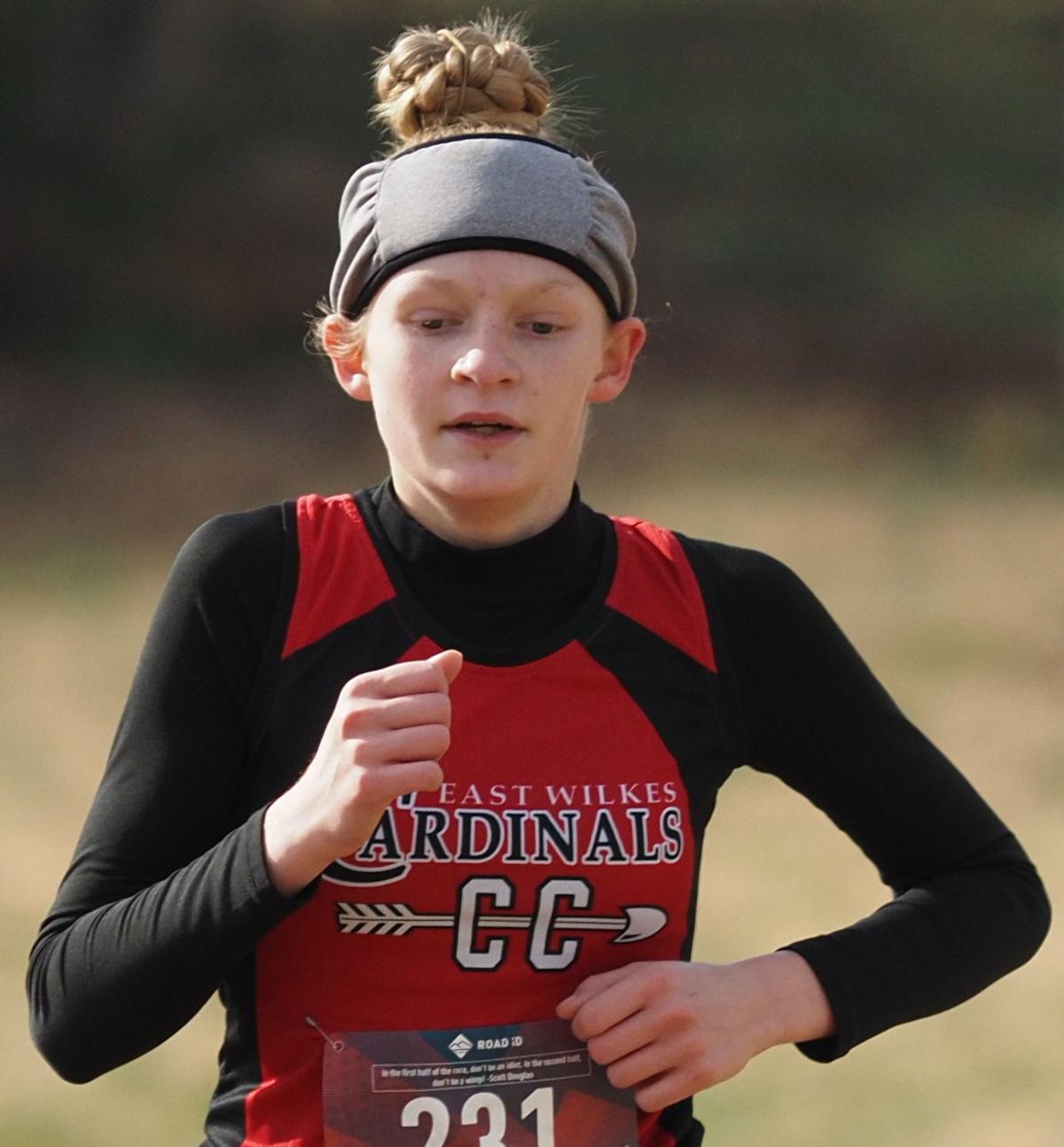 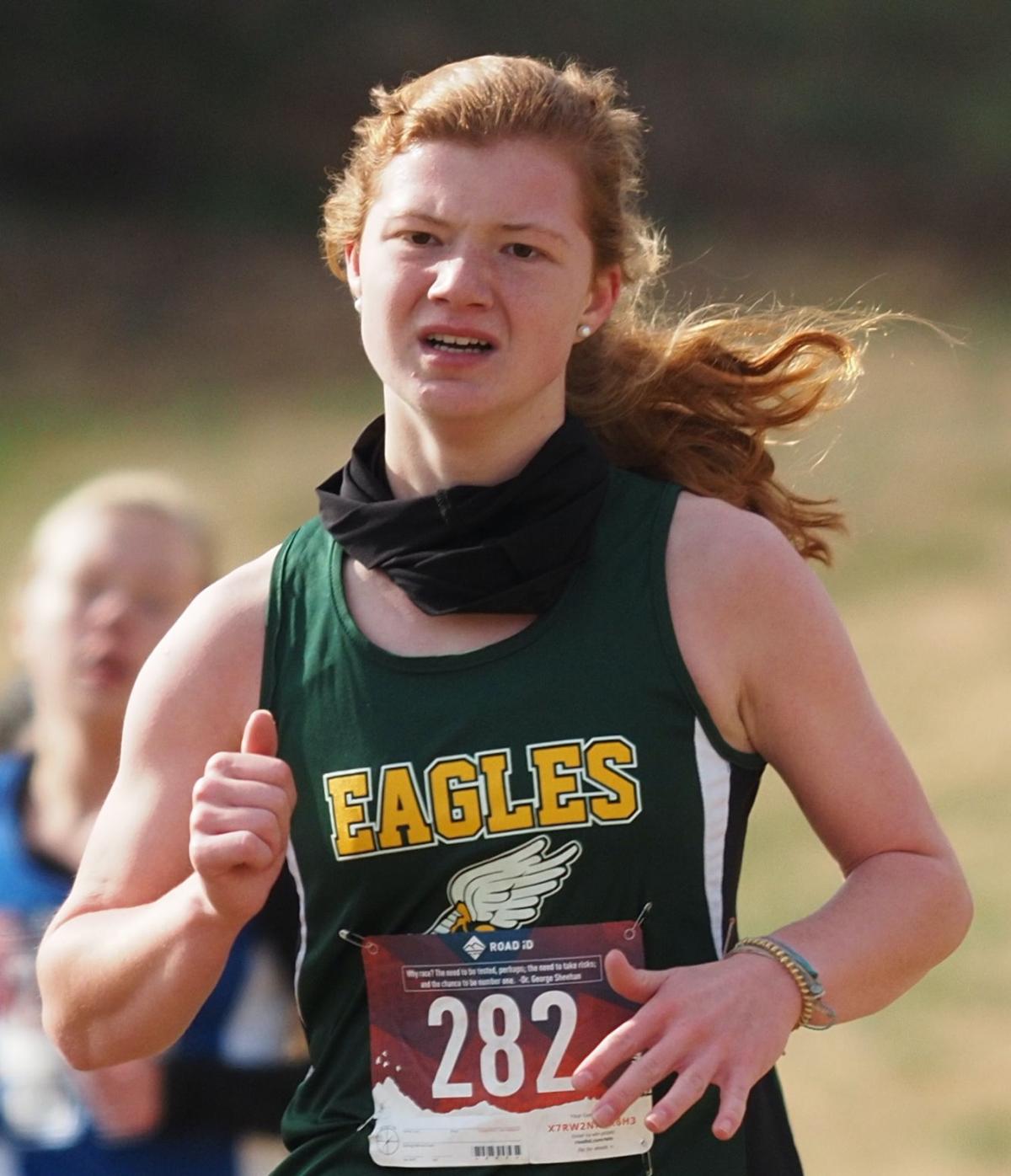 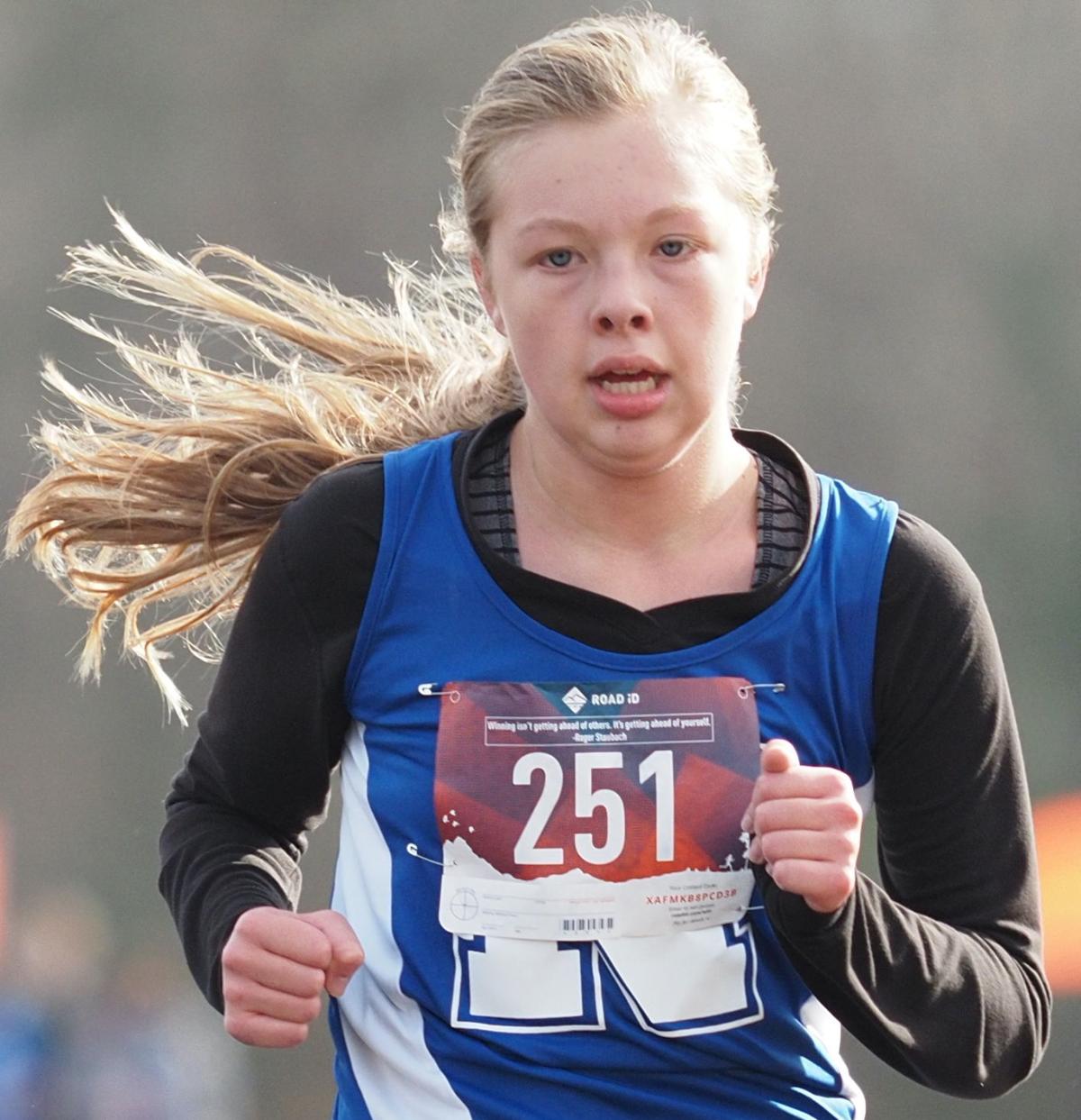 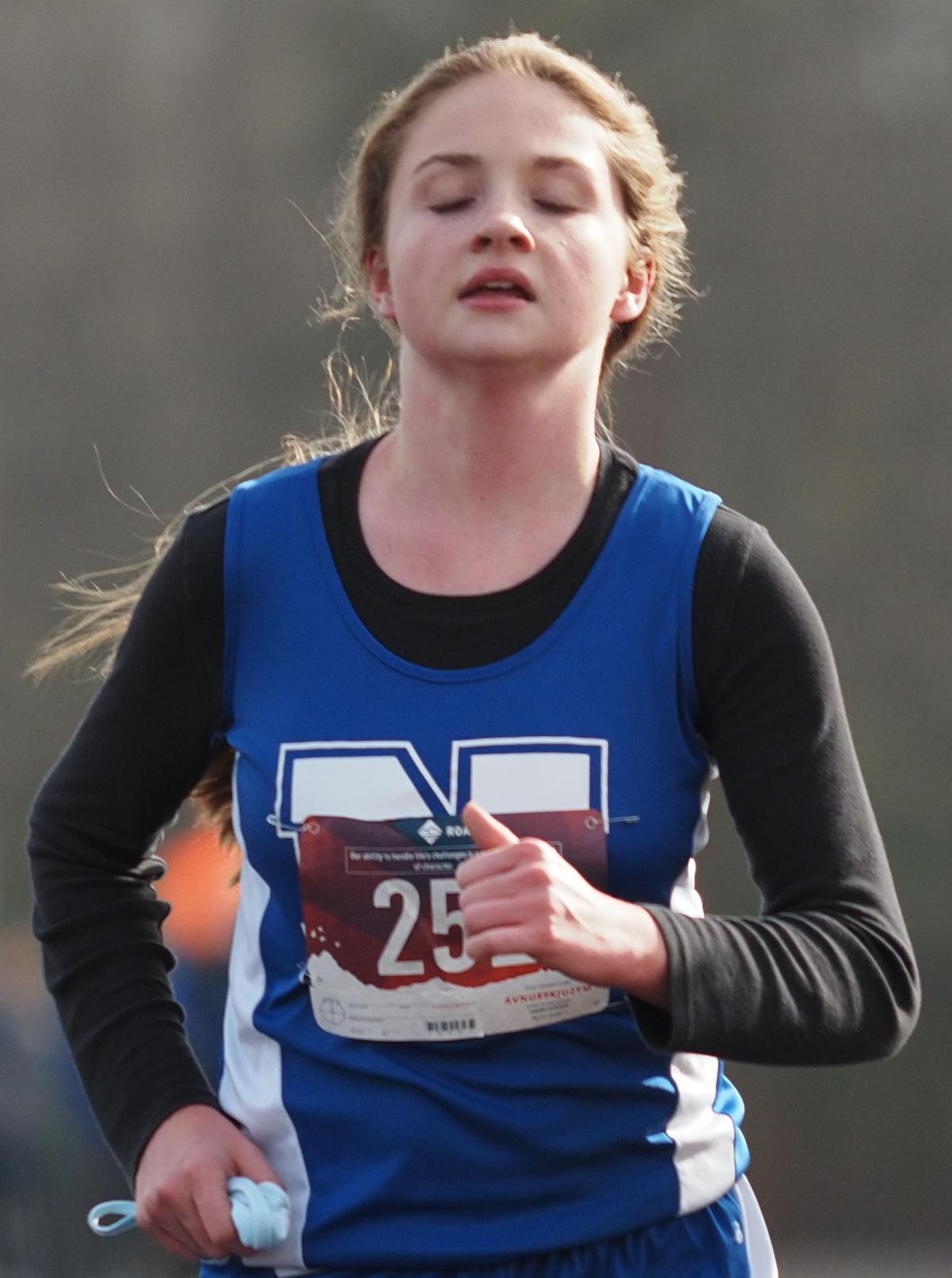 In his maiden run in the Mountain Valley 1A/2A Athletic Conference cross country championships, Wilkes Central’s Jadon Gage made quite the first impression.

The senior first-year runner blitzed the field in Millers Creek, winning by more than a minute (17:24) over West Wilkes senior Austin Triplette (18:28), who finished runner-up for the second straight year.

“Jadon closed the book on an amazing season by winning the conference and being named runner of the year,” said Colby Shell, the Central coach.

In the team standings, the Eagle boys finished tied for second with West Wilkes. Each squad had 54 points but Central won the tiebreaker for second by virtue of its sixth-fastest runner, junior Nick Hall. West fielded five runners, the minimum needed for a team score.

The Ashe County boys had 41 team points to win conference for the fourth straight year, as did the Ashe girls. Ashe Coach Shane Greene, a West Wilkes graduate, was again named league coach of the year.

“I truly thought we had a shot to win” the boys title, said Shell. “I hate that we didn’t give our best performance but there were some highlights for sure. Burch Taylor (19:42) capped off an awesome season with a sixth place finish as only a sophomore.”

“Once again, our boys did not fail to impress me,” said West Coach Rhiannon Adams. “They all showed up. The effort was definitely there. We knew Ashe was solid and going to be tough to beat and that Wilkes Central was going to give us a fight.”

Triplette secured a top-four finish for the fourth straight year. Wayne, with his fifth-place finish, would have qualified for regionals last year but did not this year due to tighter qualification standards related to the coronavirus pandemic.

“My team fought to still qualify for regionals,” said Shell. “Even if it was based on a tiebreaker we are looking forward to getting to right the ship at regionals” on Jan. 16 in Dobson.

West’s fifth-fastest runner, junior Wesley Furr, took 26th at 23:20 to help forge the team tie with Central. “Not being able to break that tie by not having a sixth runner stung but that’s part of it,” said Adams. “I couldn’t be prouder of them for the time, dedication, progress and heart they’ve put into the program.”

The Central girls finished third with 53 teams points, outpaced by Elkin’s 41 and Ashe’s 35.

Eagle freshman Peyton Gage was the county’s top finisher, taking third with a time of 22:40. Alleghany’s Hazel Pasley (19:15) finished more than two minutes ahead of another junior, runner-up Ava Bledsoe of Elkin (22:24).

“We had some awesome performances up top,” noted Shell. “Both Peyton and Isabelle (Curry, eighth, 23:59) qualified for regionals and the team battled hard. I can honestly say they gave it all they had.”

Shell said he looks forward to seeing Gage and Curry, a junior, compete in regionals on the flat course at Fisher River Park in Dobson. “I expect to have some state qualifiers before everything is all said and done.”

East Wilkes sophomore Annika Bell posted a top 5 finish with a clocking of 23:36.

North Wilkes had only two runners—and both were freshmen—but both made the all-league podium: Natalie Mathis (ninth, 24:16) and McKenzie Harrold (12th, 25:02).

Central sophomore Kaelyn Twiggs earned a spot on the honorable mention all-league team by finishing 16th with a time of 25:37.

West Wilkes fielded three runners, the fastest of whom was freshman Kyley Brindle (24th, 28:36). Neither West nor North fielded enough runners to qualify for a team score.

A few clouds from time to time. Low 61F. Winds light and variable.