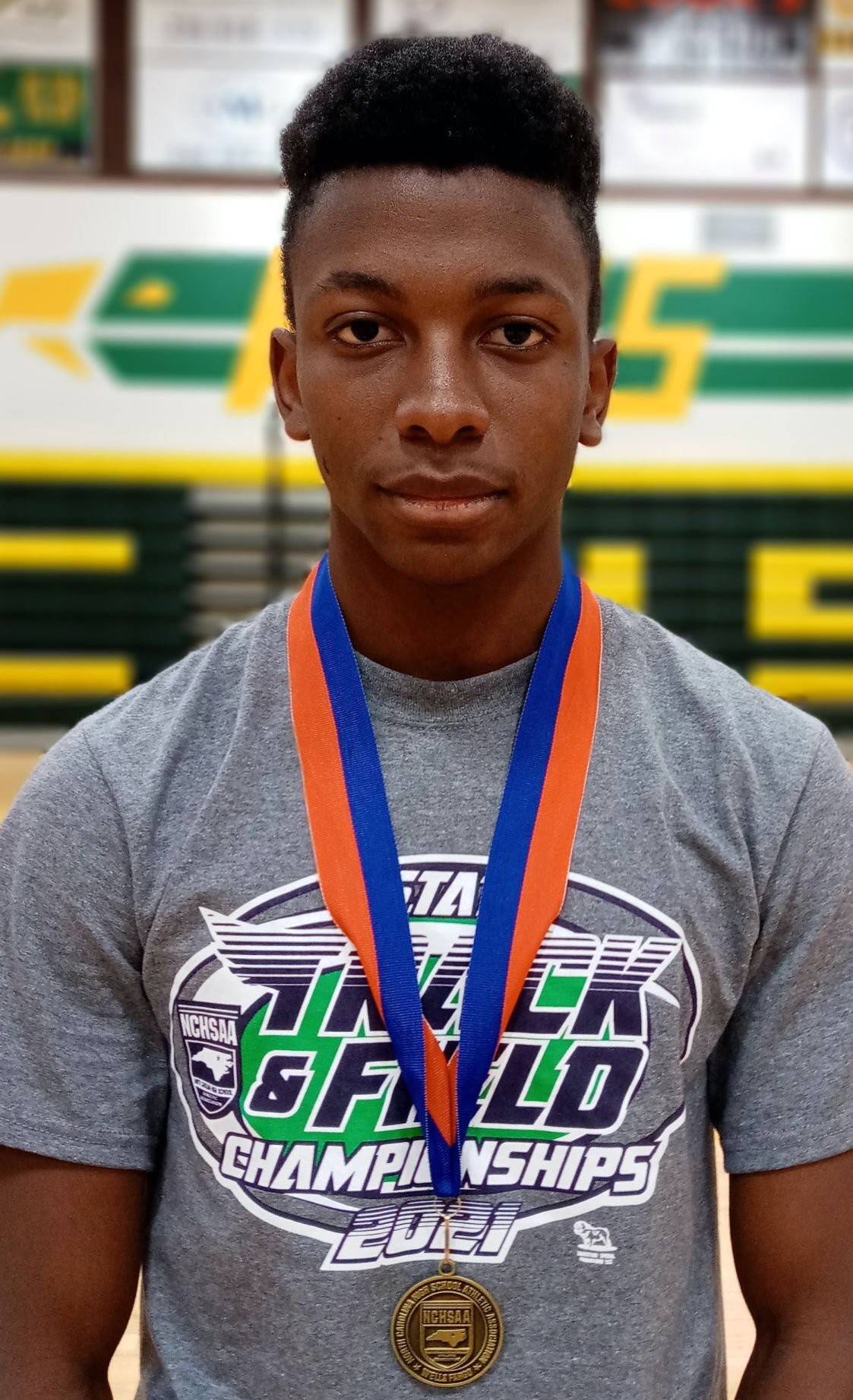 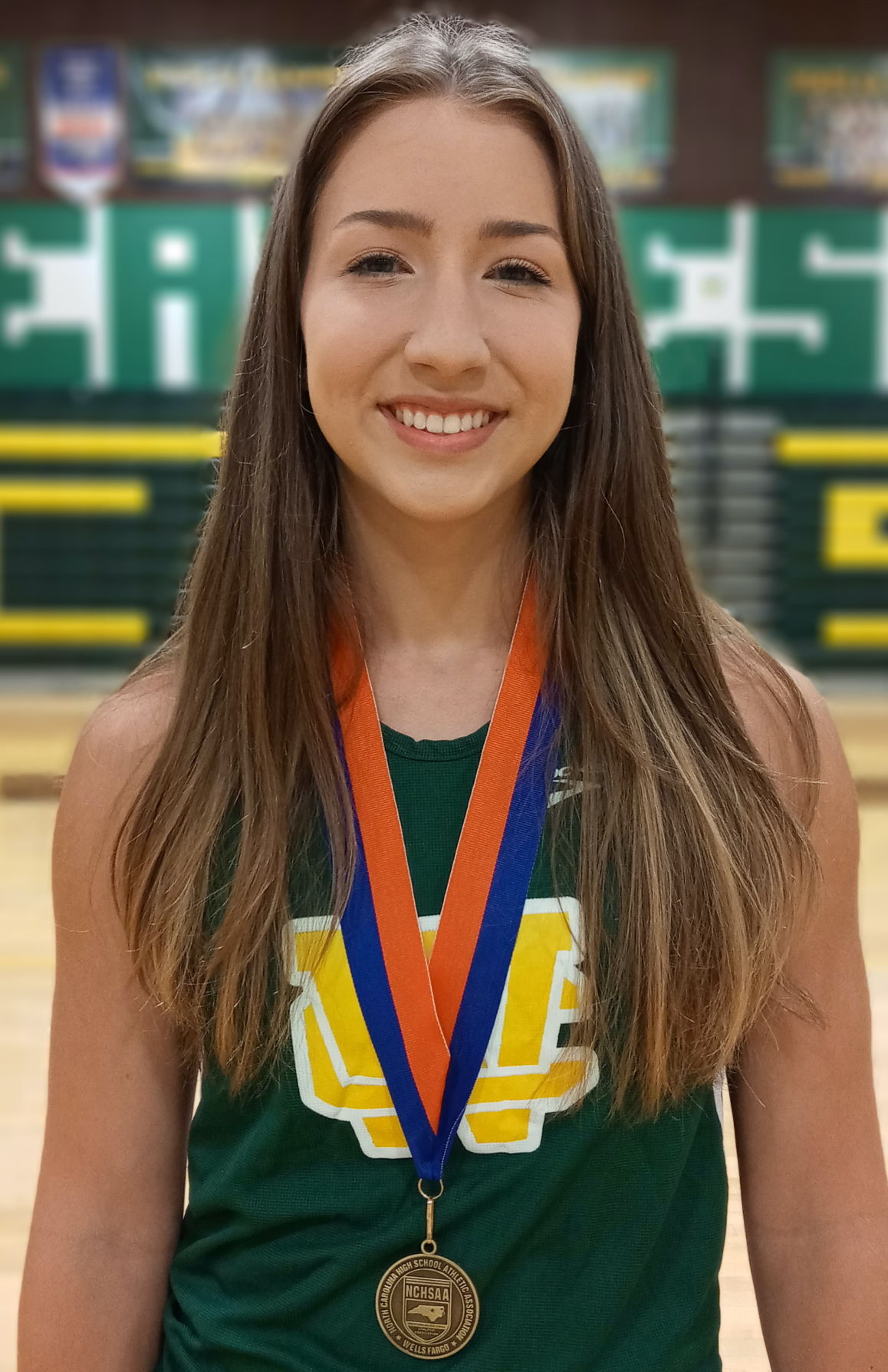 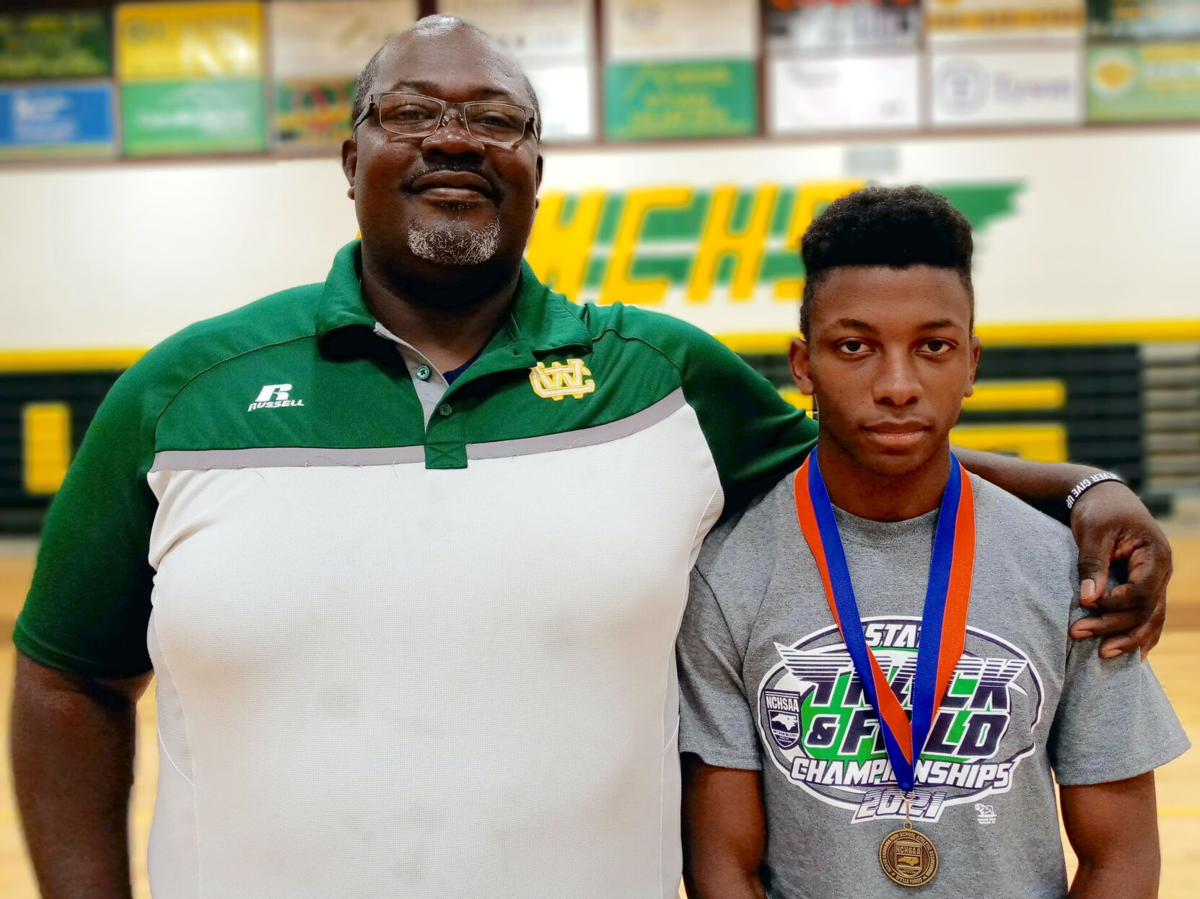 Terry Hayes, the 2A state long jump champion of 2021, is pictured here with his coach, Amp Smith. 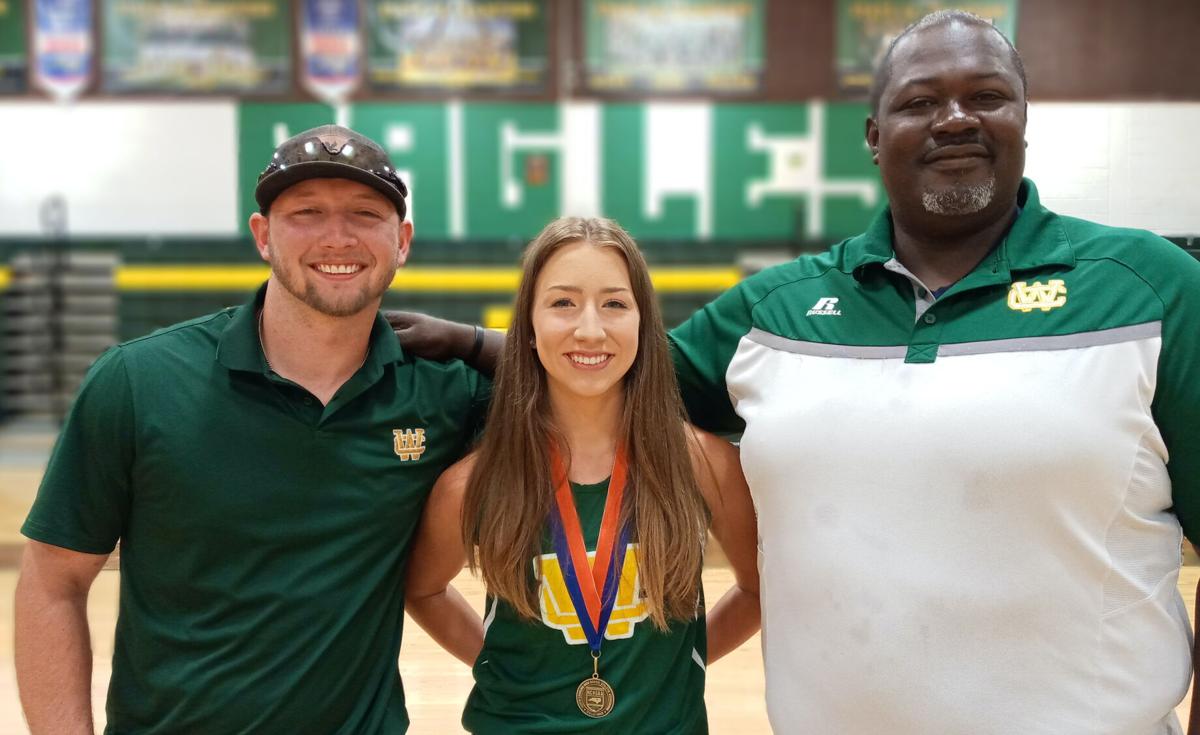 Terry Hayes, the 2A state long jump champion of 2021, is pictured here with his coach, Amp Smith.

Hayes won the long jump with a leap of 22-4 ½ on his third jump, easily outdistancing the runner-up (Cummings’ Noah Poteat) by almost two feet. His leap was just four inches short of the Central school record.

Tully cleared 10 feet in the pole vault, winning by four inches over the height achieved by two other performers.

The outdoor state titles were the first for Wilkes County prep athletes since Jathan Sales of East Wilkes won the 1A 110-meter hurdles in 2014.

It’s in the genes

Hayes follows in the footsteps of his father, who he said long jumped 23 feet in his prep career near Charlotte. The junior said he’s now shooting to eclipse his father’s leap as a senior at Central.

“It feel pretty good” to win the state title, said Hayes in an interview Monday. “It hasn’t sunk in yet—haven’t had time to process it yet.”

Hayes said his mom and grandma were there to cheer him on Saturday. “I just wanted to do good for them. I didn’t get any sleep the night before—I got like 15 minutes of sleep.”

“I’m very proud of Terry,” said Anthony (Amp) Smith, his coach. “We got to the meet and rushed to get him his uniform. He didn’t warm up, do a run-through or anything. I just said, ‘Go get ’em!’ and he took care of business.”

Hayes is a “very hard working young man,” according to Smith. “He’s always respectful and humble. I think that Terry felt that once he got down there, that everybody was behind him.”

Smith said that practicing for the long jump with a hurdle in the pit forced Hayes to elevate. “When I saw his takeoff on the first jump (Saturday), in my mind, that hurdle was still there for Terry.”

Hayes got a confidence booster at regionals last week, when he won with a leap of 21-10, said Smith. “The heat was unbearable, and his first few jumps weren’t very good, but I saw the confidence level go up when he won. I knew he would be a top contender at state.”

The junior gave special thanks to Coach Smith, “all the coaches here, and my three best friends—Carlos, Boss and Jalik.”

She said the state title was unexpected. “I had a rough week leading up to the state meet and it tested my faith. I just had to put my trust in the Lord and just enjoy it. I was really blessed to have a good year, and I’m thankful for that.”

After clearing the winning height, “it was just relief—a lot of relief. After watching the previous girl clear her height I knew that even if I didn’t (clear 10 feet) I would probably win on (fewest number of) attempts.”

Tully said, “First, I want to thank God as He has given me the ability and opportunity and I am just doing this to bring Him glory. I want to thank my family, Coach (Dustin) Triplett, Coach Amp (Smith), Coach Morell and my coaches in Washington.”

Prior to the Tully family’s move, Smith assured Abigail’s mother, Laura, “We probably have the best pole vault coach in the state, Coach Trip. I thank Laura for believing in me, because we hadn’t met at that point. And I want to thank Coach Triplett for helping Abigail reach that championship title. It’s awesome.”

Triplett, Central’s school record holder in pole vault and former decathlete at Western Carolina University, said that coaching Tully “has been fun, that’s for sure. Abigail is a great kid and just an excellent student and young woman. I thank her parents for letting me work with her.

“We set a goal and hit that goal at the first meet, and just went on from there. There were some tough practices here and there, but she’s a good vaulter and she knew she had it in her. We want to continue raising the bar and do it again next year.”

West senior Kennedy Collins took sixth in the triple jump with a leap of 34-6 ¾.

North junior Calvin Transeau took tenth in the shot put with a heave of 42-0.

Partly cloudy skies during the morning hours will become overcast in the afternoon. Slight chance of a rain shower. High near 85F. Winds light and variable.

A few showers in the evening, then clear overnight. Low 51F. Winds light and variable. Chance of rain 30%.

Certain feeling this time of year

A matter of personal rights