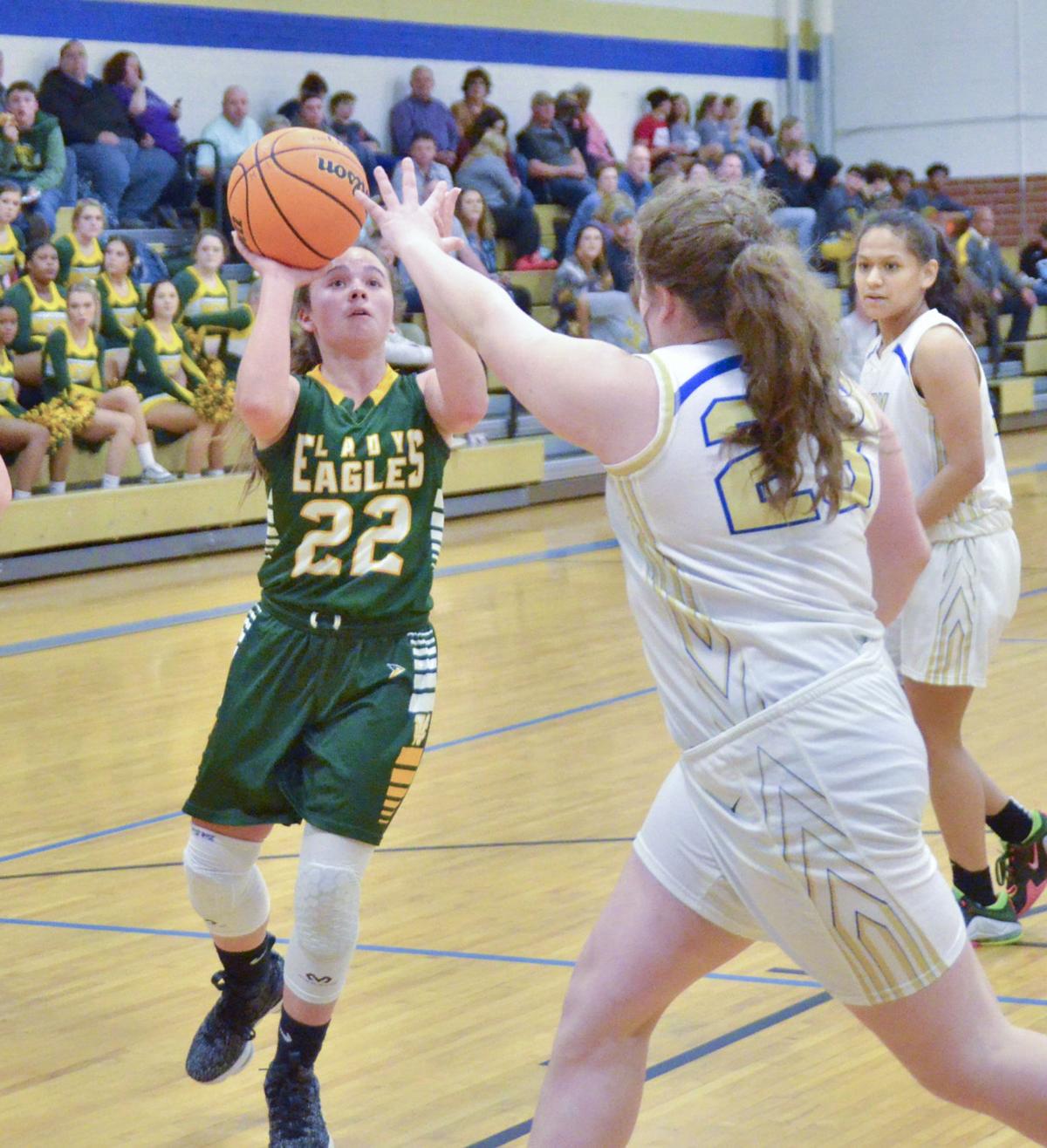 ZOE SUSI drives to the basket against Elkins’s Lindsey Edwards in Wilkes Central’s win on Tuesday. 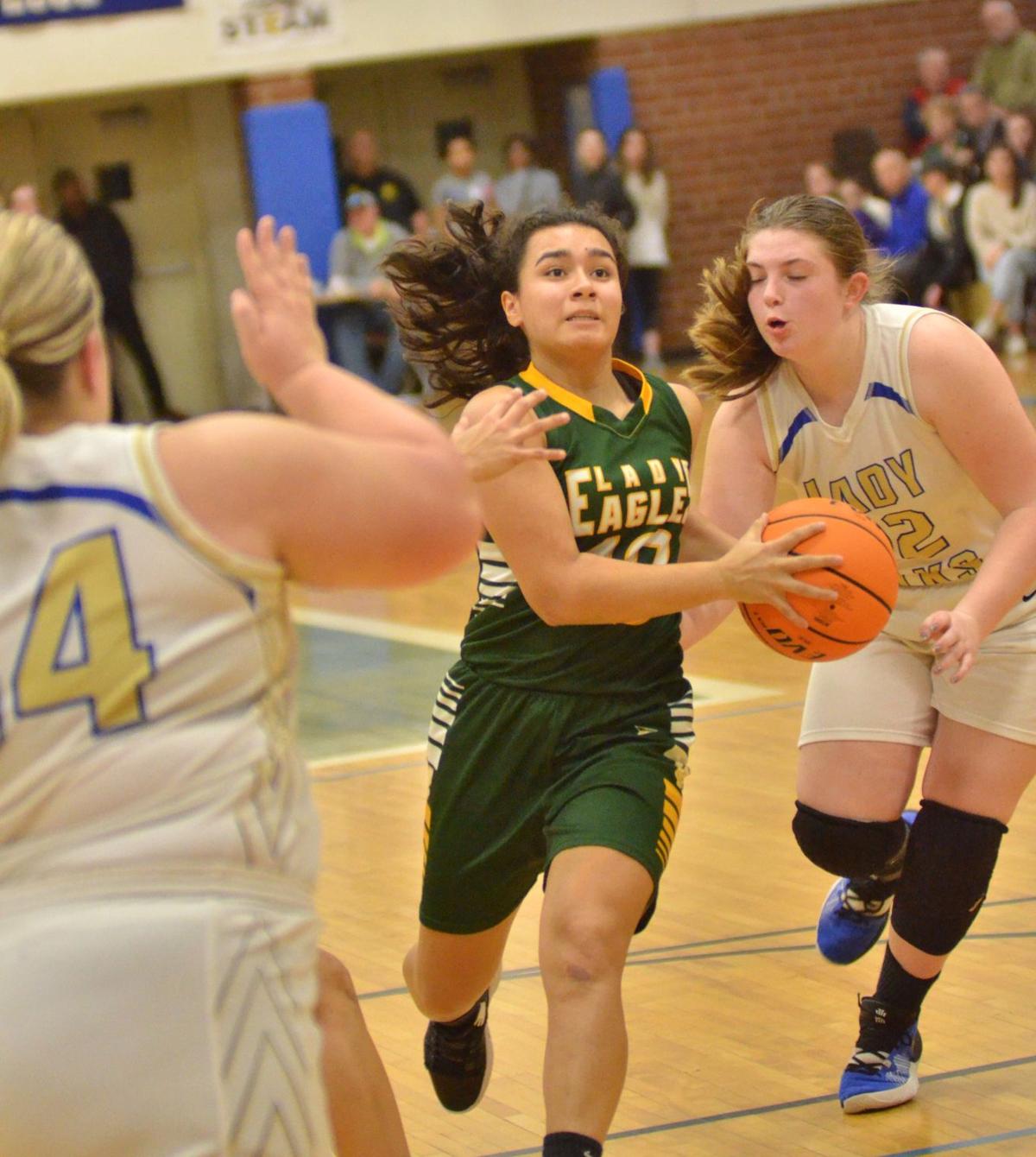 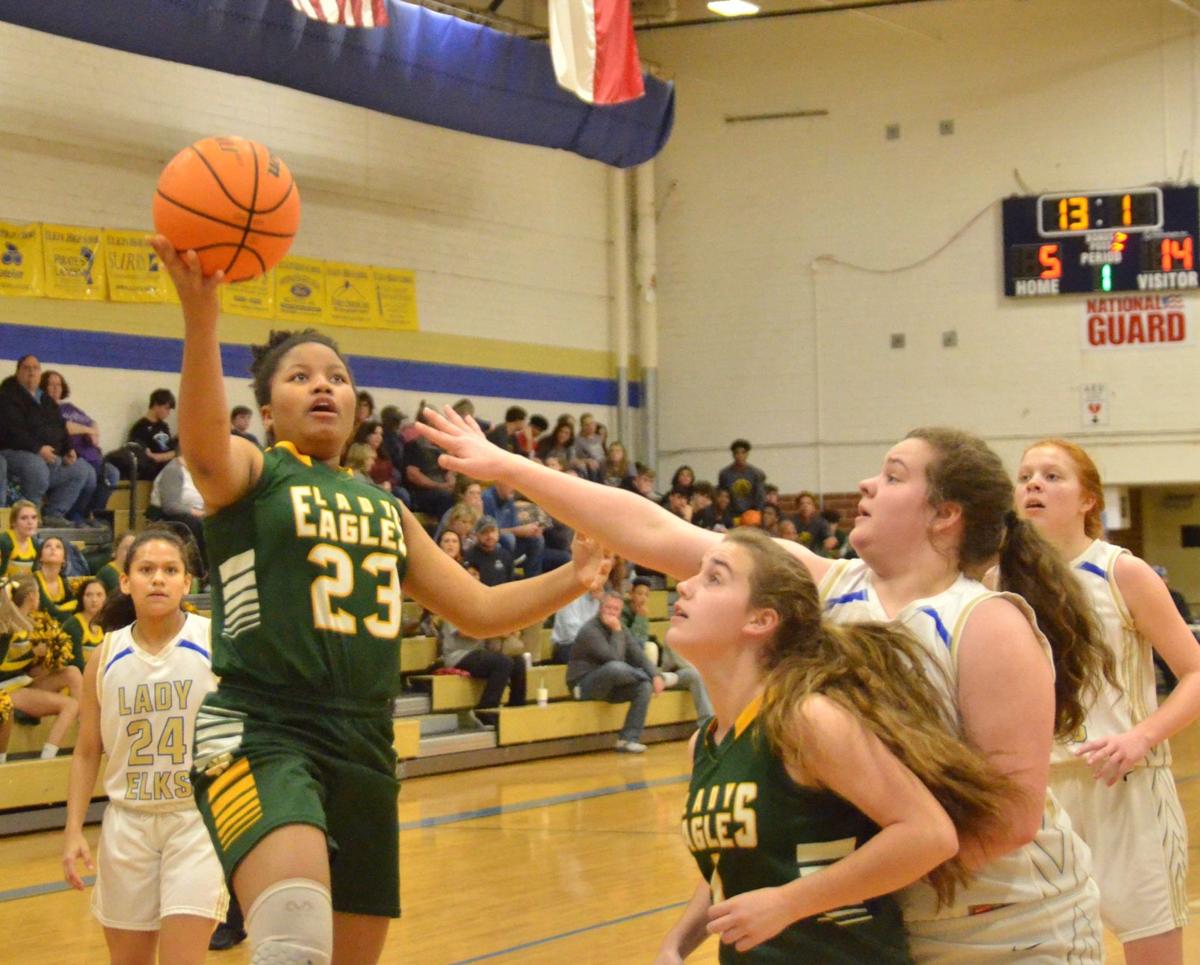 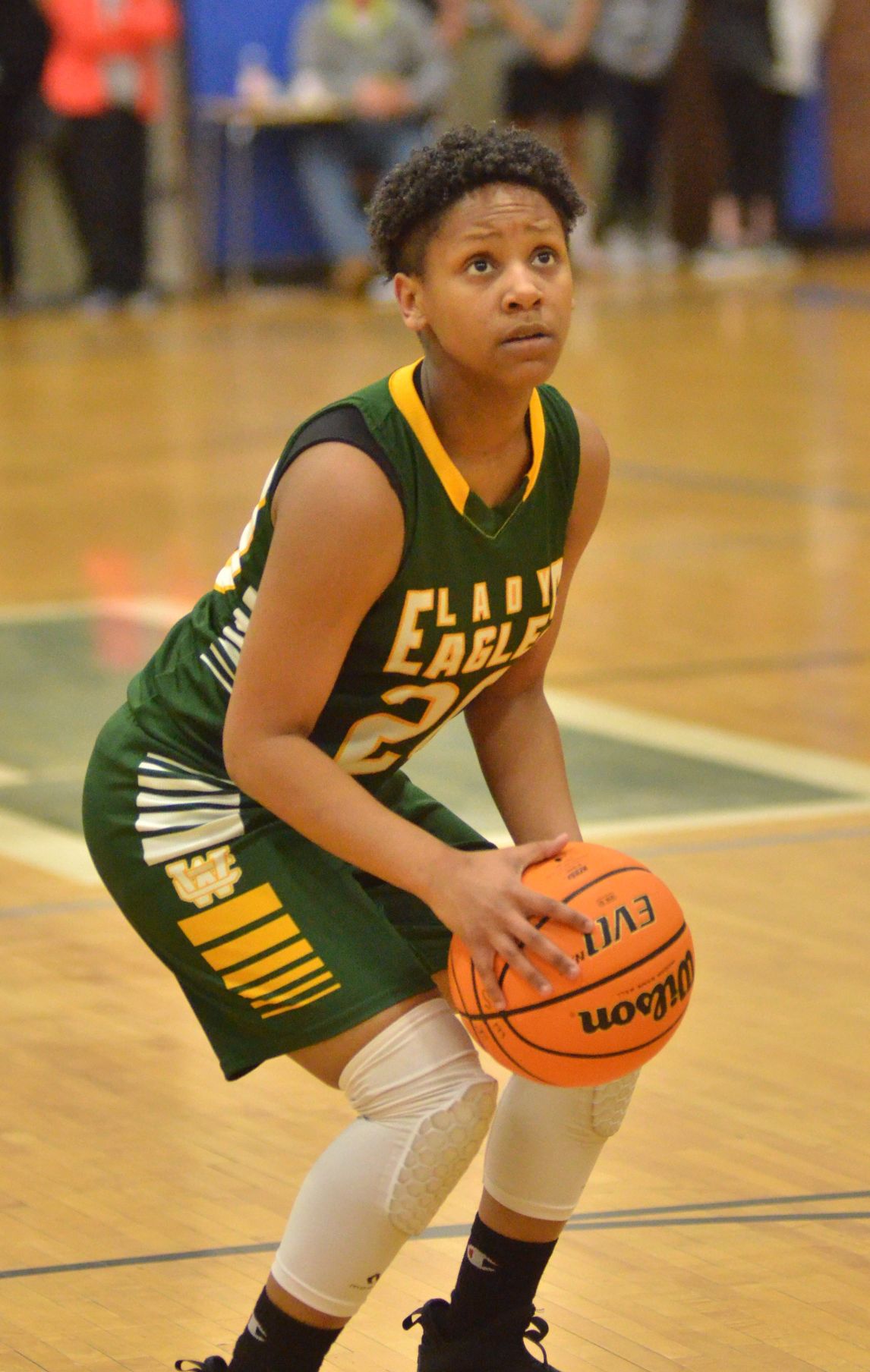 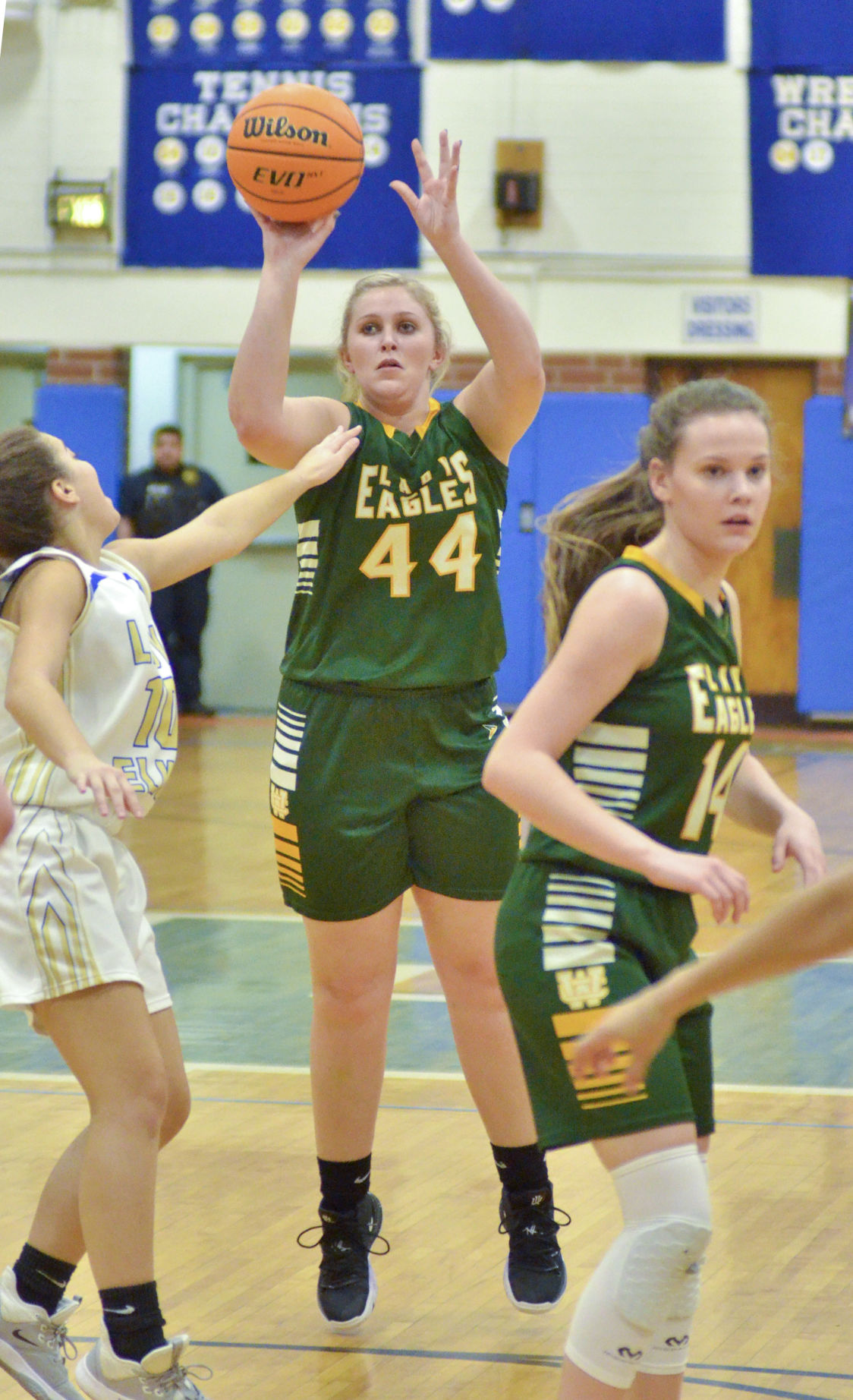 MADISON GERMAN, who scored 11 points in Wilkes Central’s win on Tuesday night, knocks down a 3-pointer while being guarded by Elkin’s Olyvia Martin. Also in the photo for the Eagles is Karlie Anderson.

ZOE SUSI drives to the basket against Elkins’s Lindsey Edwards in Wilkes Central’s win on Tuesday.

With their 64-36 win over Elkin inside N.H. Carpenter Gymnasium, the Eagles earned a share of the MVAC title with both Ashe County and Alleghany.

The three teams, along with West Wilkes, were tied for the conference lead heading into Tuesday’s games. It’s also the third conference title that Central has either shared or won outright since the 2014-15 season.

And now the Eagles will turn their attention to the MVAC tournament, which begins at home tonight (semifinals and finals will be at North Wilkes). Central, which garnered the No. 3 seed and will host No. 6 Starmount at 6 p.m., has won the last two conference tournaments.

“I’d rather share it than not have it all. Wilkes Central basketball, both girls and boys, has a rich tradition and to be able to keep that going is something the girls can be proud of,” said Wilkes Central Head Coach Greg Davenport. “I told them starting Friday night, we’ve got to go 1-0, just like we tried to do last year.”

Looking to bounce back from last Friday’s loss to the Huskies, the Eagles quickly jumped out to a double-digit lead (14-3) after an Erica Wyatt 3-pointer.

Central (17-5, 11-3) continued to grow the lead, taking a 25-9 advantage on a Jacklyn Richardson layup following an assist from Wyatt.

Wyatt, who led the Eagles with 21 points, pushed the lead to 31-11 with another triple.

“We talked about getting out to a quick start. The last two or three games that we’ve not come out on the winning end, we’ve struggled with bad starts,” said Davenport. “We’ve been able to finish strong in those games but we got so far behind early, so we talked about making sure that we come out tonight with good defense and get some transition baskets and early baskets.”

However, Central responded with back-to-back 3-pointers from Madison German and Sarah Lowe; a pair of German free throws pushed the advantage back to 20.

A Catherine Chaquea layup and a 3-pointer from Azariah Banks extended the lead to the eventual 28-point margin of victory.

In addition to Wyatt, German added 11 points while Lowe and Chaquea added nine and eight, respectively, as eight different Eagles got into the scorebook.

Notes: Wyatt hit the 1,000-point milestone late in the first quarter on Tuesday night. According to Davenport, a ceremony to honor Wyatt’s scoring milestone will be scheduled for the Eagles’ first-round tournament game. Jennings, who was recognized before the game for scoring her 1,000th point (against Alleghany on Jan. 28) before the game, led the way for Elkin with 21 points and Selena Islas added five. The Eagles also captured the JV game, 31-19, to conclude the regular season at 15-4 and 11-3 in the league — second behind Ashe County. Jayla Smoker led the Eagles with 16 points and Ryleigh Parker and Katie Nichols added seven points apiece. Lily Gambill paced the Elks with nine points.

Partly cloudy during the evening. A few showers developing later during the night. Low 43F. Winds light and variable. Chance of rain 40%.