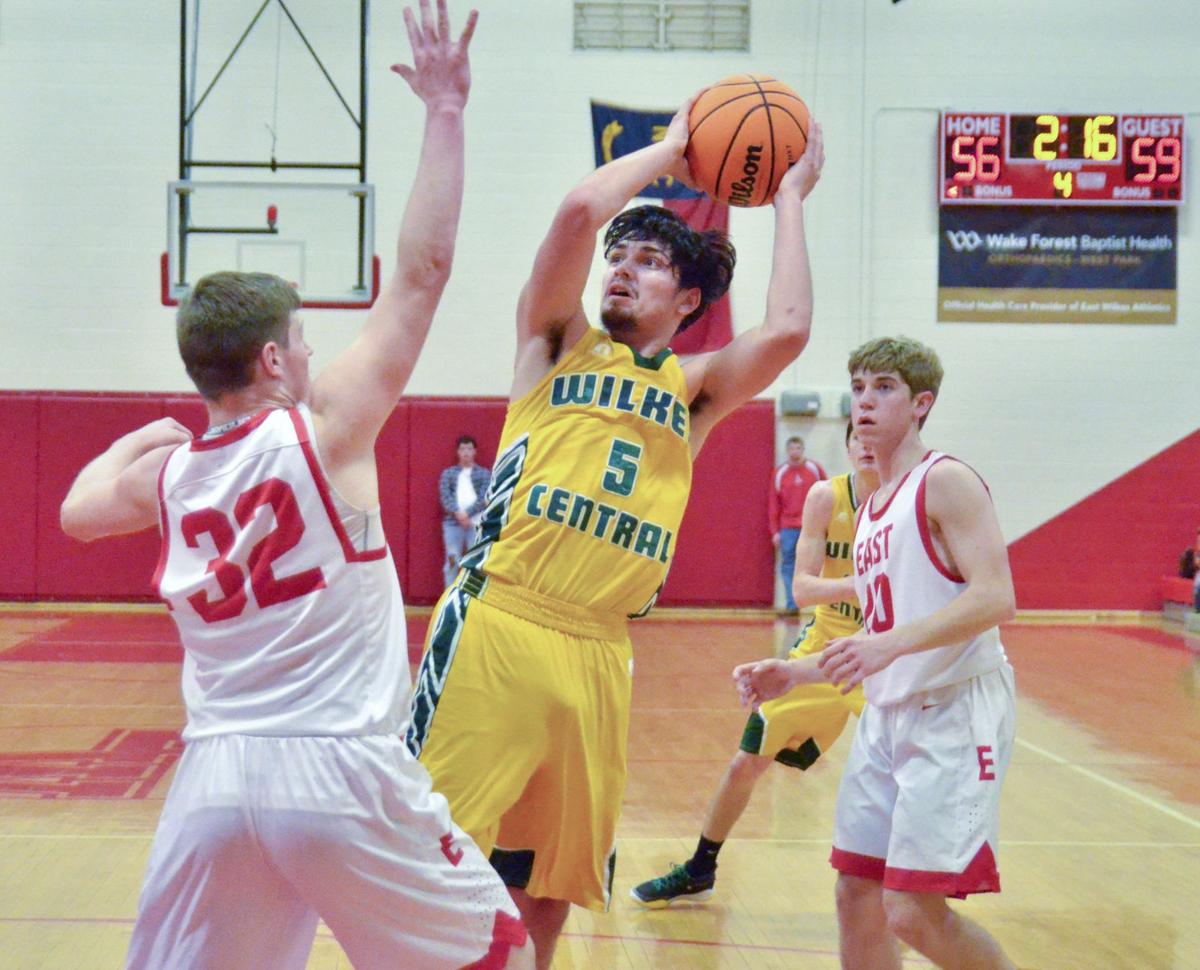 WILKES CENTRAL’S Marcus Lopez puts up an off-balance jumper while being defended by East Wilkes’ Brayson Church in the fourth quarter of Friday’s game. Also in the photo for the Cardinals is Dylan Ward. 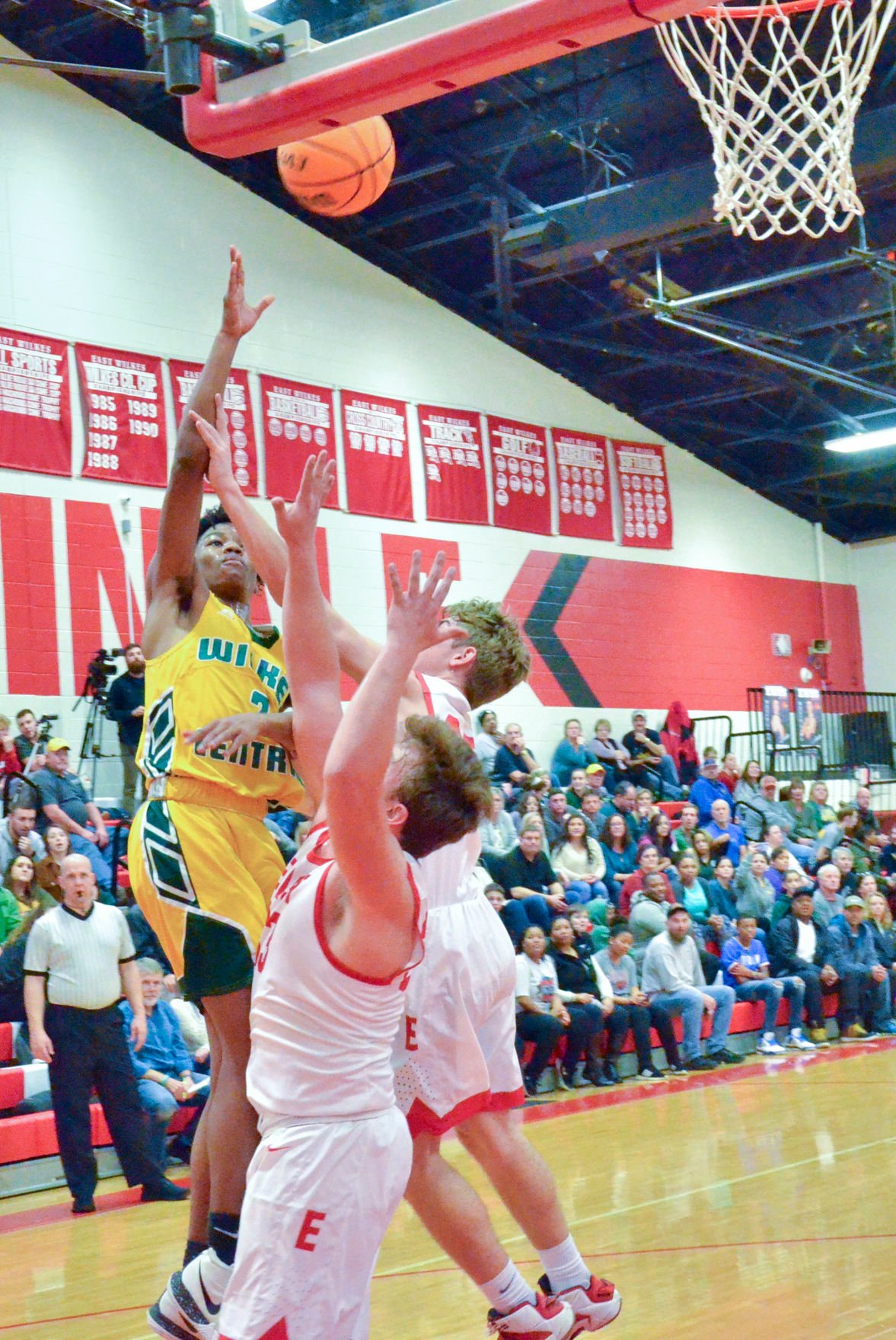 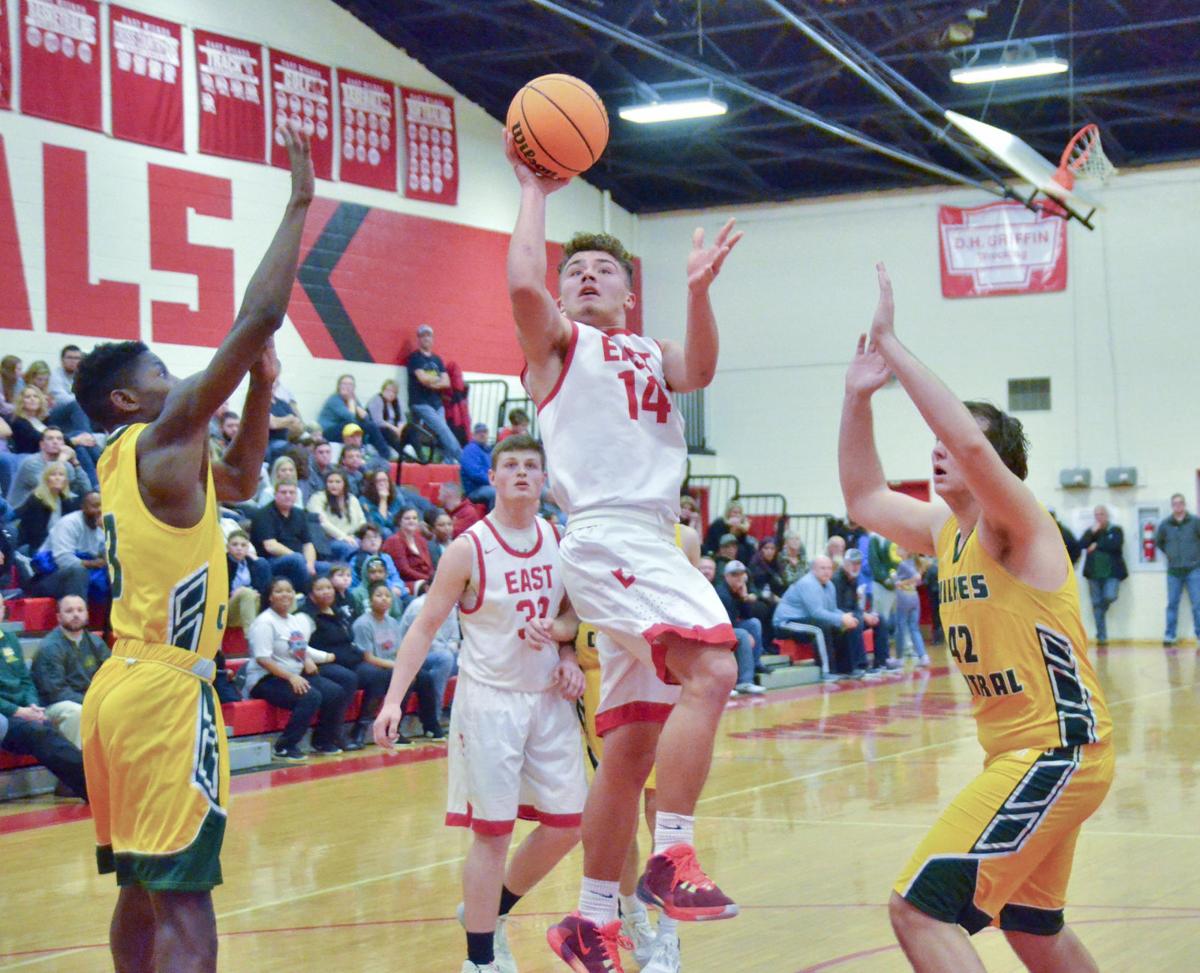 East Wilkes' Caeden Howell puts up a jumper while being guarded by Wilkes Central's Jamairius Allen and Jonah Brooks in the second half.

WILKES CENTRAL’S Marcus Lopez puts up an off-balance jumper while being defended by East Wilkes’ Brayson Church in the fourth quarter of Friday’s game. Also in the photo for the Cardinals is Dylan Ward.

East Wilkes' Caeden Howell puts up a jumper while being guarded by Wilkes Central's Jamairius Allen and Jonah Brooks in the second half.

The Wilkes Central Eagles had to overcome a two-point deficit (46-44) entering the fourth quarter.

And then held off a determined East Wilkes squad to capture a 65-59 Mountain Valley Athletic Conference road win in Ronda Friday night.

The Eagles established an early 7-0 lead scoring on three of their first five possessions while the Cardinals could not find the range as they launched four unsuccessful 3-pointers.

“I thought we did a really good job of winning ugly. We knew it was going to be a grind, East has a really good team,” said Wilkes Central Head Coach Matt Hagaman. “We were really tough in the last three minutes and made plays when we needed too. We made enough free throws down the stretch to hold on. This is a very poised group.”

After a quick timeout by East, it scored the next four points to cut the lead to three (7-4). The lead hovered around 3-to-5 points for the rest of the quarter with the Eagles clinging to a 13-9 advantage at the conclusion of the frame.

The latter half of the quarter was all East Wilkes as it scored the last 11 points including a long distance trey by Tate Samples at the buzzer to make the score 27-22. The senior finished with 12 points on four deep 3-pointers.

“Tate Samples has come on strong at the end of the season, he is shooting with a lot of confidence and he has gotten a lot better defensively,” said Rousseau.

Both teams scorched the nets to begin the 3rd quarter but the Cardinals (4-13, 1-8) cut the lead to a single point 37-36, primarily on the strength of three straight 3-pointers by Ledger Blackburn, Trey Lambert and Caeden Howell.

After the teams traded baskets the Cardinals took a two-point lead into the fourth quarter as Samples hit two more 3-pointers to close the quarter.

The Eagles quickly erased the two-point margin with a layup by Daylon Banks on the first possession of the final quarter. After a Cardinal turnover, Banks, who finished with a game-high 22 points, connected on two free throws to take a two-point advantage at 48-46.

Dylan Ward tied the score 48-48 on the Cardinals’ next possession. After both teams missed opportunities, Blackburn hit a three pointer to give the Cardinals their biggest lead at 51-48. Banks made a pair of free throws to cut the lead to one but Howell scored to regain the three-point advantage.

Banks drove into the middle of the East defense and put up a difficult shot that bounced off the right side of the rim but an alert Jakob Gowan dunked the putback to cut the Cardinal advantage to one, 53-52.

Both coaches agreed that play was a major moment in the game.

“Jakob’s dunk was huge it gave us a big lift. A few possessions later, he hit a big three to give us a lead we never gave up,” said Hagaman.

And Rousseau agreed with Hagaman’s sentiments.

“That obviously took the wind out of our sails,” said Rousseau. “We thought we had defended well and made Banks take a difficult shot. When he (Gowan) hammered that one down, there was a momentum shift.”

After a Cardinal turnover, Zach Mastin scored to give the Eagles a lead at 54-53. East Wilkes’ Brayson Church scored in the lane and was fouled. Church made the subsequent free throw to give East a 56-54 lead.

Gowan connected on a three pointer to give Wilkes Central a lead it would build on for the final minute. That was the last field goal the Eagles scored as they made 7-of-12 free throws to secure the win.

“I know this group has no quit in them,” said Rousseau. “I know that in the last two minutes we are going to be in a one possession game. We have in all of our conference losses.”

In addition to Banks, Gowan added 12 and Jonah Brooks chipped in 11 for the Eagles, who will travel to MVAC-leading West Wilkes tonight. The Blackhawks suffered their first conference loss at Elkin on Friday.

In the evening’s JV game, the Eagles were victorious 60-52 despite a 21-point, fourth quarter effort from the Cardinals, who trailed by 15 points after three quarters.

Some clouds this evening will give way to mainly clear skies overnight. Low 39F. Winds NNW at 5 to 10 mph.

Some clouds this evening will give way to mainly clear skies overnight. Low 39F. Winds NNW at 5 to 10 mph.