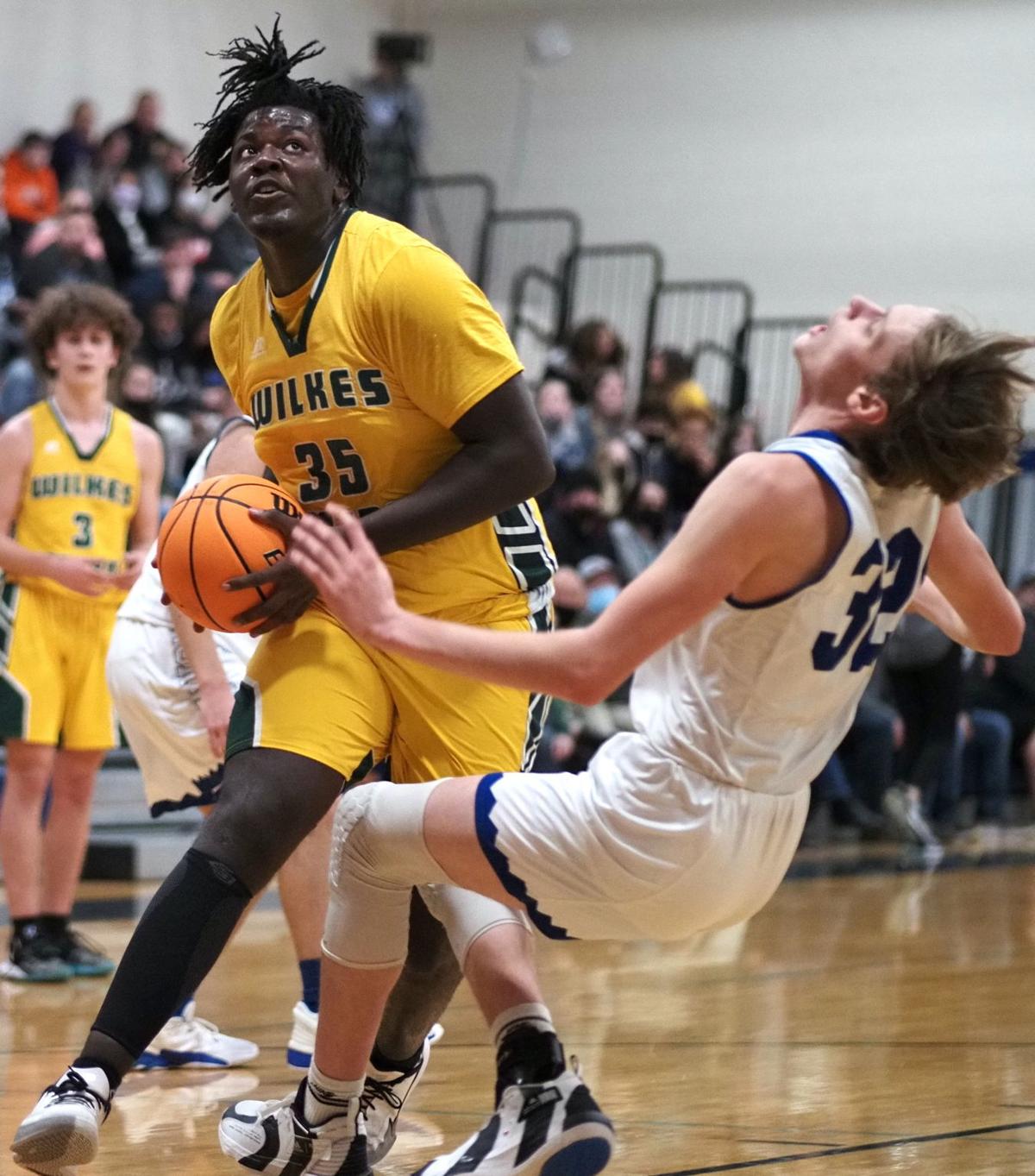 Wilkes Central junior Kamen Smith charges into North Wilkes’ Reese Cleary in Hays on Friday. Smith had 14 points and Cleary had 16 in the Eagles’ 53-52 victory. 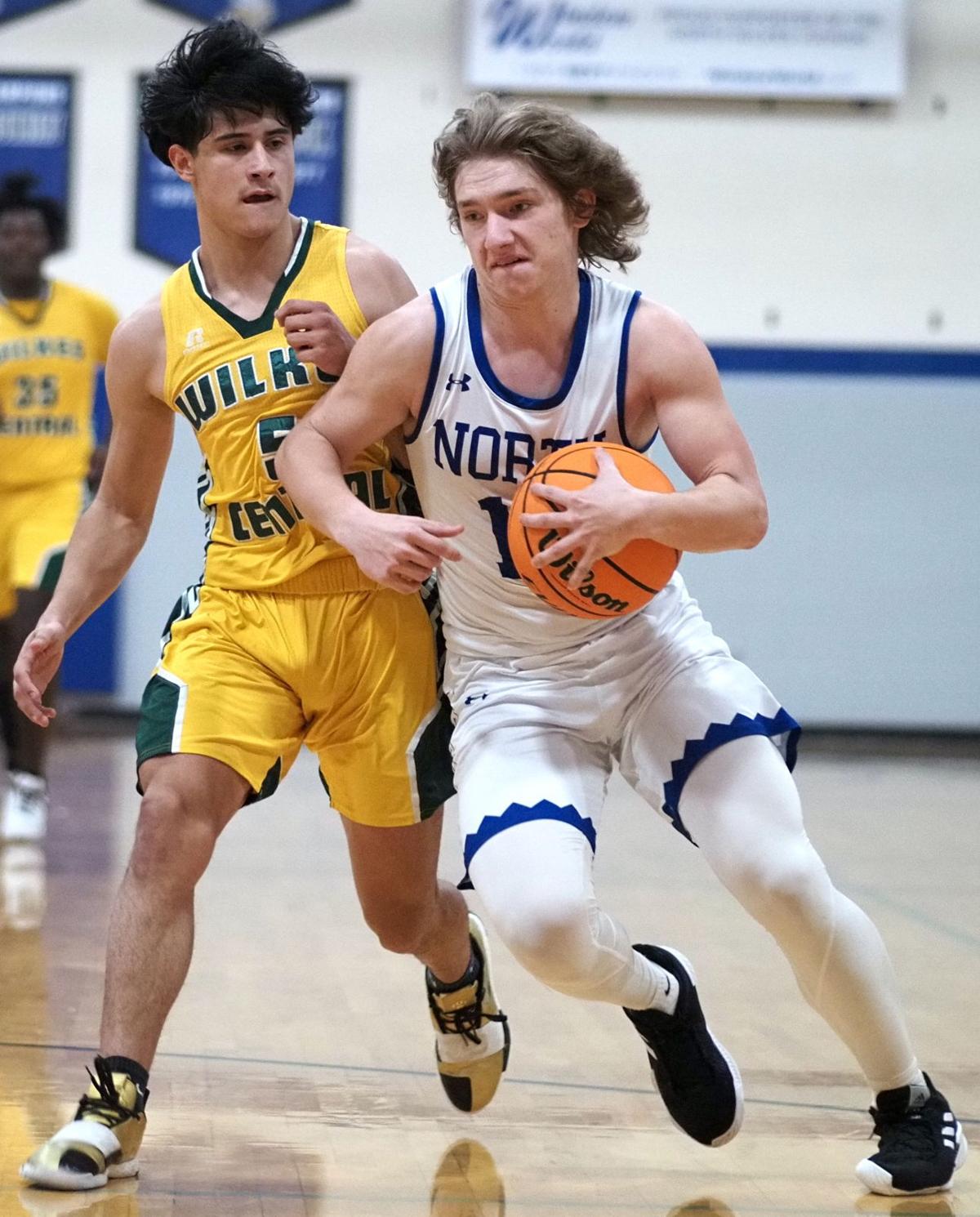 North Wilkes senior Zach Wyatt protects the ball from Wilkes Central junior A.J. Villalpando on a drive to the basket Friday in Hays. Wyatt had five points as the Vikings fell short to their intercounty rival, 53-52.

Wilkes Central junior Kamen Smith charges into North Wilkes’ Reese Cleary in Hays on Friday. Smith had 14 points and Cleary had 16 in the Eagles’ 53-52 victory.

North Wilkes senior Zach Wyatt protects the ball from Wilkes Central junior A.J. Villalpando on a drive to the basket Friday in Hays. Wyatt had five points as the Vikings fell short to their intercounty rival, 53-52.

It was an old-fashioned barnburner in Hays on Friday, as the Wilkes Central varsity boys edged North Wilkes, 53-52, with the drama playing out in the final seconds.

The Eagles extinguished an eight-game losing skid with the Foothills 2A Conference win, which upped the team’s records to 3-8 overall and 1-4 in league play.

“It was a good game; both teams played hard,” said Eagle Coach John Hamilton. “North battled back in the second half. We got some big plays from a number of players. Aithan Allen hit a big three in the fourth quarter to keep us close.”

North (2-7, 0-3) held thin advantages for most of the final quarter, but with 57.9 seconds to play, Central’s Carlos Reyes-Martin made good on a layin to make it a one-point Viking lead.

North’s A.J. Crane missed the front end of a 1-and-1 with 22.5 ticks left, Central’s Kamen Smith rebounded, and the Eagles took timeout with 16.2 to play.

Off a set play, Reyes-Martin dribbled right then cut left into the lane, scoring from about five feet out with five seconds left. North then called time with 3.5 ticks remaining.

Zach Wyatt—the quarterback on the Viking football team—threw a court-long inbounds pass out of the timeout, with 6-7 Reese Cleary his intended target. The ball was tipped right to Grayson Lamb, who came up short on a 15-footer at the buzzer.

Leatherman scored 14 of his game-high 18 points in the first half. Reyes-Martin and Smith each chipped in with 14 points.

“We shot better from the free throw line (14-21) and that helped us in the game,” noted Hamilton. “We still need to do a better job protecting the ball and limiting our turnovers.”

Cleary netted 10 of his team- and season-high 16 points after halftime. Chris Kimmel backed him with a season-high 15 points, all coming in the final three periods.

Reyes-Martin completed a three-point play for a 10-8 Eagle lead with 2:50 left in the first. With about two seconds remaining in the period, Smith scored in the lane for a 15-8 lead.

“Carlos is doing a good job at the point guard position and Kamen is getting lots of rebounds for us,” added Hamilton.

The Eagle lead was stretched to 27-17 after A.J. Villalpando connected on an eight-foot runner with two minutes left in the first half. Leatherman drained a three-pointer and scored in the lane in the final 25 seconds left in the period, boosting Central’s lead to 32-22 at the break.

The Vikings rallied in the third quarter, as Trevon Hague’s trey from the right wing, off a feed from Lamb, tied it at 36-all with 3:20 left in the third.

Leatherman was fouled on a three-point attempt with 2.8 ticks left in the third, and he made 2-of-3 from the charity stripe for a 42-38 Eagle lead going into the final period.

“We look forward to (Friday’s) rematch with East Wilkes (in Moravian Falls) and will have almost our whole team available for that game (as of Monday),” said Hamilton. “We have had at least two starters out—different ones—for the last 10 games.”

East Wilkes got back on the winning track with a 47-44 decision over Alleghany in Sparta on Friday.

The Cardinals picked up their first Northwest 1A Conference win of the season, halting a three-game losing slide. East improved to 4-7 overall and 1-3 in league play.

East trailed 43-42 before Briggs Gentry canned a three-pointer from the left elbow with three minutes to play. After Weston Brown made 1-of-2 foul shots for a 46-44 Cardinal lead, Ledger Blackburn rebounded a Trojan miss then made a steal, setting up Gentry making 1-of-2 from the charity stripe with 13.7 ticks left.

Brown then gathered an Alleghany misfire and missed the front end of a 1-and-1, but Brock McKnight couldn’t connect on a three-quarter-court desperation heave at the buzzer to preserve the Cardinal win.

McKnight poured in 22 points and made five steals for the Trojans, who regressed to 3-6, 0-3.

The upset-minded Blackhawks trailed 40-23 at halftime but rallied after the break, outscoring the visitors 28-21 and 23-14 in the final two periods.

Jahreece Lynch paced the Greyhounds with a game-high 32 points, which included six three-pointers. James McCreary added 20 points, with 15 coming on a quintet of threes.

Alexander Central jumped on West Wilkes early and cruised to a 57-20 nonleague win in Taylorsville on Jan. 5.

The Cougars never looked back after posting 12 points and holding the Blackhawks scoreless in the first quarter.

Alexander Central upped its overall mark to 12-2 while West slipped to 3-7.

North Stokes remained at the top of the Northwest 1A Conference after a 71-35 shellacking of East Wilkes in Danbury on Jan. 5.

The Vikings bettered to 12-1 overall and 4-0 in league play. The Cardinals, after their sixth loss in the past seven games, backslid to 3-7, 0-3.

It was a one-possession game with under two minutes to play but the Blackhawks made four free throws in the final minute to seal the win, their second straight over the Eagles.

West junior Carson Edmiston scored a game-high 22 points and “played his most complete game of the year,” according to Coach Scottie Greene.

“It was an awesome, total team win,” noted Greene. “Everyone contributed on both ends of the floor and we played well defensively. The boys have worked really hard and it is starting to show fruition.

“Coming back from a two-week COVID (and winter break) pause, I wasn’t sure how we would play. The boys picked up where they finished on Dec. 17 (a 44-35 win at North Wilkes). They are getting better and better each and every day.”

Jaxson Tribble, Jaheim McDougald and Harrison Holbrook each added seven points to the West effort. “Jaxson played very well with his presence in the middle, as did Harrison and Andrew Dyer. Harrison had huge rebounds and putbacks as well as one massive three (in the fourth quarter) that put the game out of reach.”

The Eagles took their last lead of the game late in the third quarter after A.J. Villalpando sank a three-pointer for a 37-35 lead. West held a slim 40-38 lead going in the fourth.

Central senior Carlos Reyes-Martin scored 14 of his team-high 17 points in the first half, allowing the Eagles to stay within two points (25-23) at the break.

Kamen Smith added 13 points for the Eagles, and Spencer Leatherman chipped in with eight.