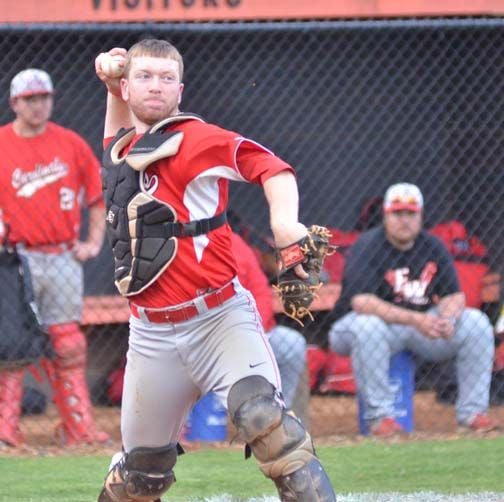 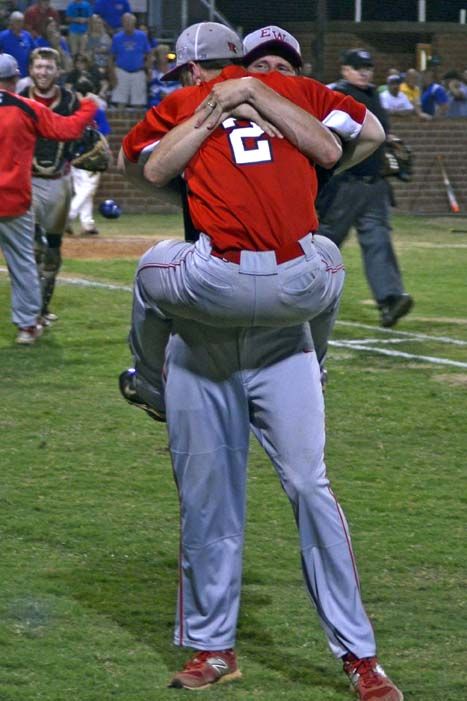 EAST WILKES third baseman Chandler Bare takes a throw from catcher Levi Ray and tags Elkin’s Daniel Brinegar, who was caught off the bag, during the two teams’ matchup in Ronda back in late March.

Back in 2004, Fox Sports coined a special saying to describe the Major League Baseball playoffs — you can’t script October.

A modified version of that sums up the playoff run this spring by the East Wilkes baseball team, which enters the fourth round of the NCHSAA 1A state playoffs.

While interviewing members of the Cardinals’ eight-player senior class following their practice on Wednesday afternoon, another saying was echoed that sums up not only this playoff run but this season — Play for Wellborn.

Todd Wellborn, the Cardinals’ coach last season and a former East Wilkes multi-sport standout, died in September of last year after a lengthy battle with cancer.

He may be gone but his presence is still strong among this group of players. When asked what he would say if he were here today, East Wilkes catcher Levi Ray’s response was on point.

“I think he would say he’d be proud of us,” said Ray. “I think that whole thing made the team come closer together and we formed a bond and it’s worked out for us.”

Will Jolly, who notched his 11th win of the season in Tuesday’s playoff win against Cherryville, talked about leaving the program in better shape than when he reached high school back in the fall of 2011.

Bouncing between the JV and varsity teams as a freshman, Jolly was primarily used at shortstop the next two seasons but was called upon to take over on the mound after a void left by graduation.

“Everybody dreams of having a great senior year and so far we’ve been really blessed,” said Jolly. “We just want to turn the program around and leave something as our legacy to everyone else.”

The Cardinals now have a chance to win as many games this season (14) as they had in their three previous seasons combined.

That fact was not lost on Chandler Bare, the final of the trio to play varsity for all four seasons.

This group of seniors has also played for four different coaches.

“It’s great to see all of our hard work finally pay off. We’ve been at this for four years and not always had the best success but we just kept at it,” said Bare.

The Cardinals’ season almost got away from them. Coincidentally, it involved Elkin, tonight’s opponent.

Following an 11-9 loss to the Buckin’ Elks on April 21, East had lost six of its previous seven contests and trailed county foe North Wilkes, 9-1, after three innings the following night.

That’s when, in Head Coach Justin Call’s words, the team had a pair of wins that “got the guys back to where they were feeling good and confident about what they were doing.”

East Wilkes pulled off one-run wins against the Vikings and Starmount but hit another setback in its first round loss to Wilkes Central in the Mountain Valley Athletic Conference tournament earlier this month.

“We had a tough loss in the conference tournament but we said that night that we wanted to take something from that,” Call said. “I think what we took away was how we have to continue to focus on finishing games and we’ve been able to use that throughout the playoffs.

“These guys are such a close group,” added Call. “It’s amazing to watch how they’ve come together this year. After the wins, it’s awesome to look at the scorebook and see that everybody is contributing. It’s been a true team effort.”

Now the Cardinals face another road test but luckily they won’t have to travel too far, just down North Carolina Highway 268.

The teams  played twice this year, splitting the regular season series but Call and the rest of the players are excited about the prospects of being this close to a spot in the regional finals.

“We’ve been road warriors. Now we get a chance to go down the road and it’s good for our area and our community,” Call said. “It shows that there’s some pretty good baseball in the Mountain Valley Conference, so it’s exciting.”

For a team that hovered around .500 for most of the season, East Wilkes’ playoff run may seem unlikely but when it comes to the postseason, anything can happen.

This bunch has certainly proved that.

With COVID-19 affecting our regular sports coverage, the Wilkes Journal-Patriot will start taking a look back at the anniversaries from this w…

Scattered thunderstorms in the evening, then variable clouds overnight with more showers at times. Low near 60F. Winds light and variable. Chance of rain 50%.