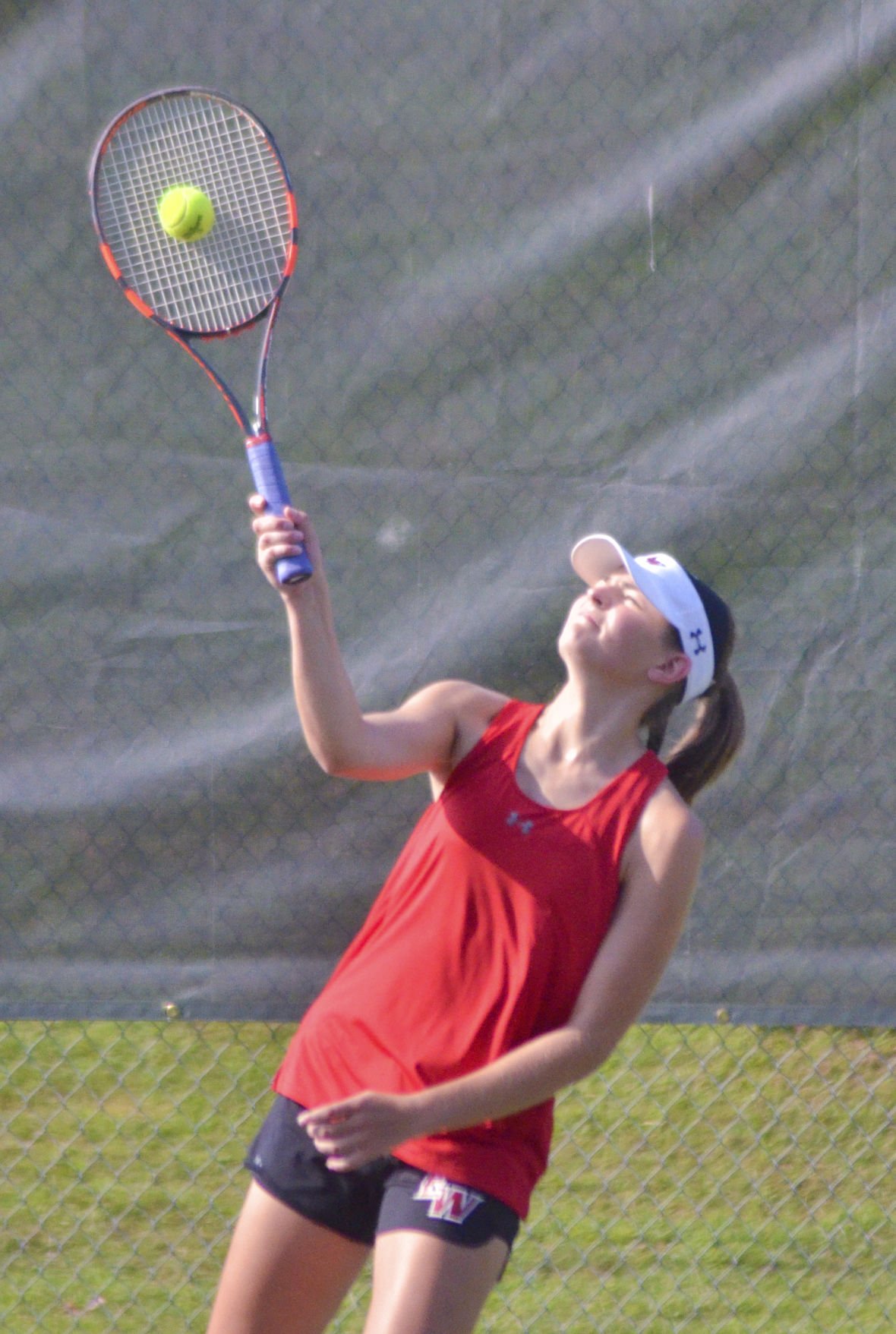 EAST WILKES’ Kaleigh Couch picked up the win at No. 3 singles play in East Wilkes’ 9-0 win on Thursday.

The first conference champion of the 2019-20 season was crowned on Thursday evening.

On the strength of its 9-0 win over Wilkes Central on senior night in Ronda, the East Wilkes girls tennis team won the regular season championship for the second year in a row.

The Cardinals won its first MVAC title in five years last fall and has won four of the last seven conference titles.

But according to Head Coach Aaron Simmons, this one has a little more meaning behind it after having to retool the top half of the starting lineup this fall.

“Winning the conference championship is always a special accomplishment, but it seemed extra special for this group,” said Simmons. “After losing our top three (Leah Nance, Katie Stokes and Lauren Rakes), all of whom were all-region players, state qualifiers and individual conference champions and other crucial leadership from last year’s team, we had to grow immensely to compete for another championship, and this group certainly did that.”

East Wilkes (16-1, 13-1) only had two seniors, both whom were recognized before the match, but Chelsea Cockerham and Lauren Felts were both in action on Thursday as parts of doubles competition.

Felts teamed with Sylvia Prevette in No. 2 doubles to earn an 8-5 win over Central’s Mackenzie Walker and Isabelle Curry.

Cockerham joined Tristen Blevins at No. 3 doubles and won 8-4 over Carol Vasquez and Caroline Langston.

“They both have an incredible work ethic and bring positive energy and enthusiasm to practice that is contagious among their teammates,” said Simmons.

Prevette and Blevins also picked up victories in singles competition at No. 2 and No. 5, respectively. The match, which did not start until 6 p.m. (due to unseasonably hot conditions), was played in eight-point pro sets.

The No. 1 doubles match between the East Wilkes tandem of Brianna Martin and Jordan Schubart and Wilkes Central’s Kiaya Barber and Riley Cearley, was the tightest match of the evening.

Both teams fought hard but Schubart and Martin emerged victorious with an 8-6 win.

The Cardinals have secured a spot in the North Carolina High School Athletic Association 1A dual playoffs, which begin on Oct. 16, though the Cardinals’ record could be good enough to earn them a first-round bye.

But before dual playoffs begin, they’ll compete in the MVAC individual tournament on Wednesday at 1 p.m. at Elkin Tennis Complex, looking to earn bids to the NCHSAA 1A West Regional tournament.

“Most of these young ladies have been working on their game tirelessly since last school year ended, and they expected to get to this level again as a team,” said Simmons. “I couldn’t be more proud of each of our players and we look forward to continuing to grow and succeed in the postseason.”

Notes: The Eagles, who concluded their season at 5-9, will also take part in the MVAC tournament Wednesday. They compete against the other 2A schools looking to secure a spot in the 2A Midwest Regional.

The numbers for all four Wilkes County girls’ tennis programs this fall are up across the board.

Some clouds early will give way to generally clear conditions overnight. Low 22F. Winds N at 5 to 10 mph.

Cloudy with periods of rain. Low 39F. Winds light and variable. Chance of rain 80%. Rainfall around a quarter of an inch.

A few clouds. Low near 40F. Winds light and variable.