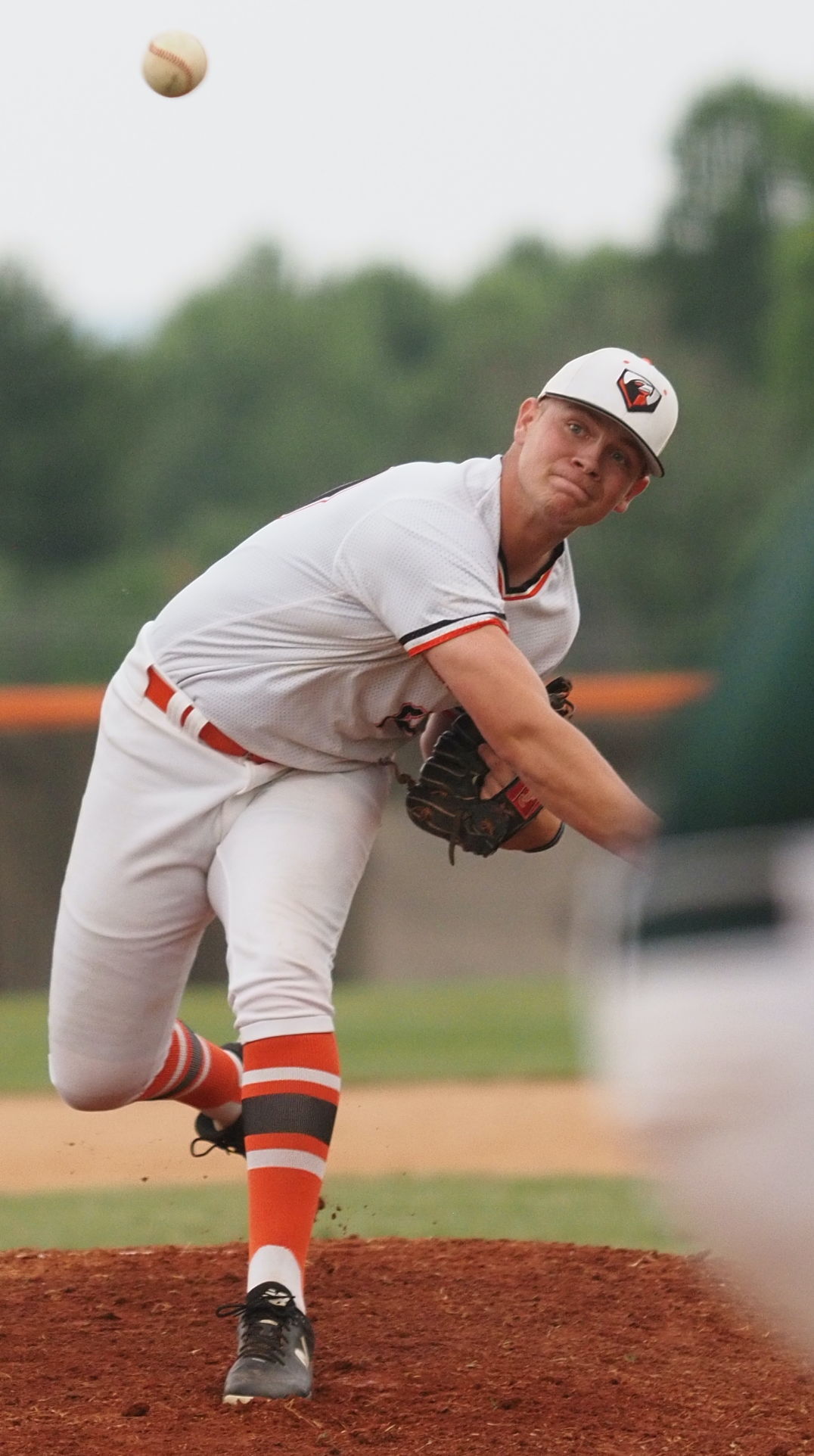 West Wilkes’ Trenton Mastin wasn’t expecting a call from the bullpen in the first inning in Millers Creek on Friday, but he responded with three-plus innings of solid work and improved to 2-0 on the season. 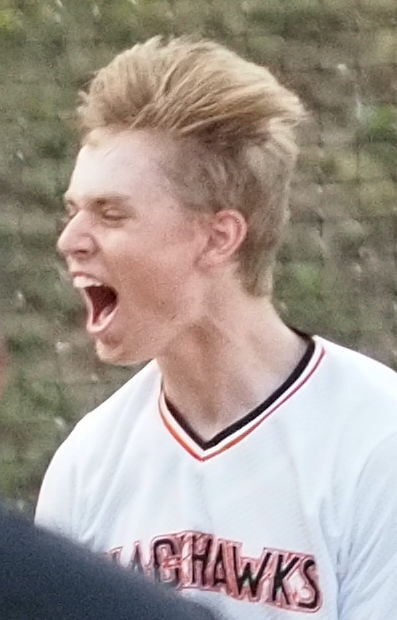 West Wilkes’ Izaac McGuire celebrates shortly before crossing home plate after a two-run homer in the first inning of his club’s 12-2 win over Wilkes Central on Friday. 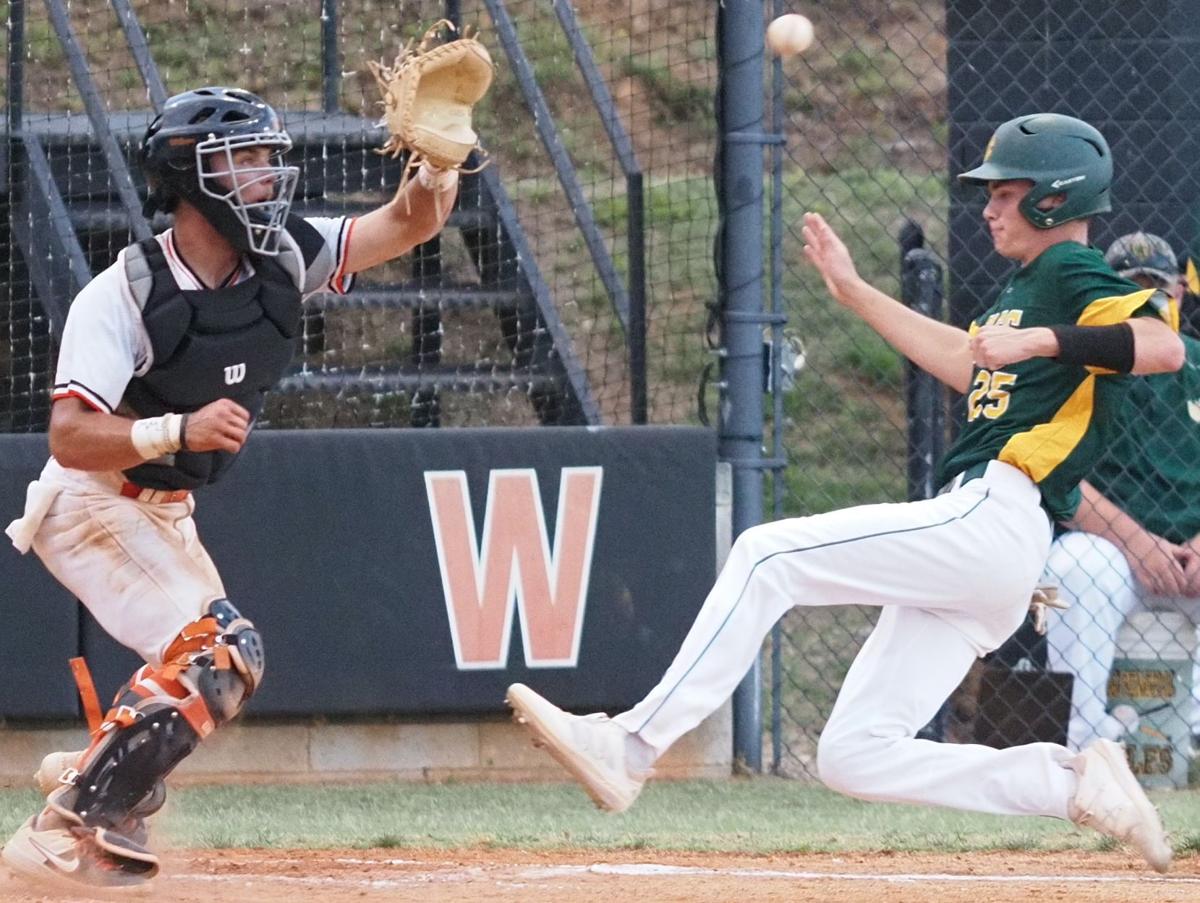 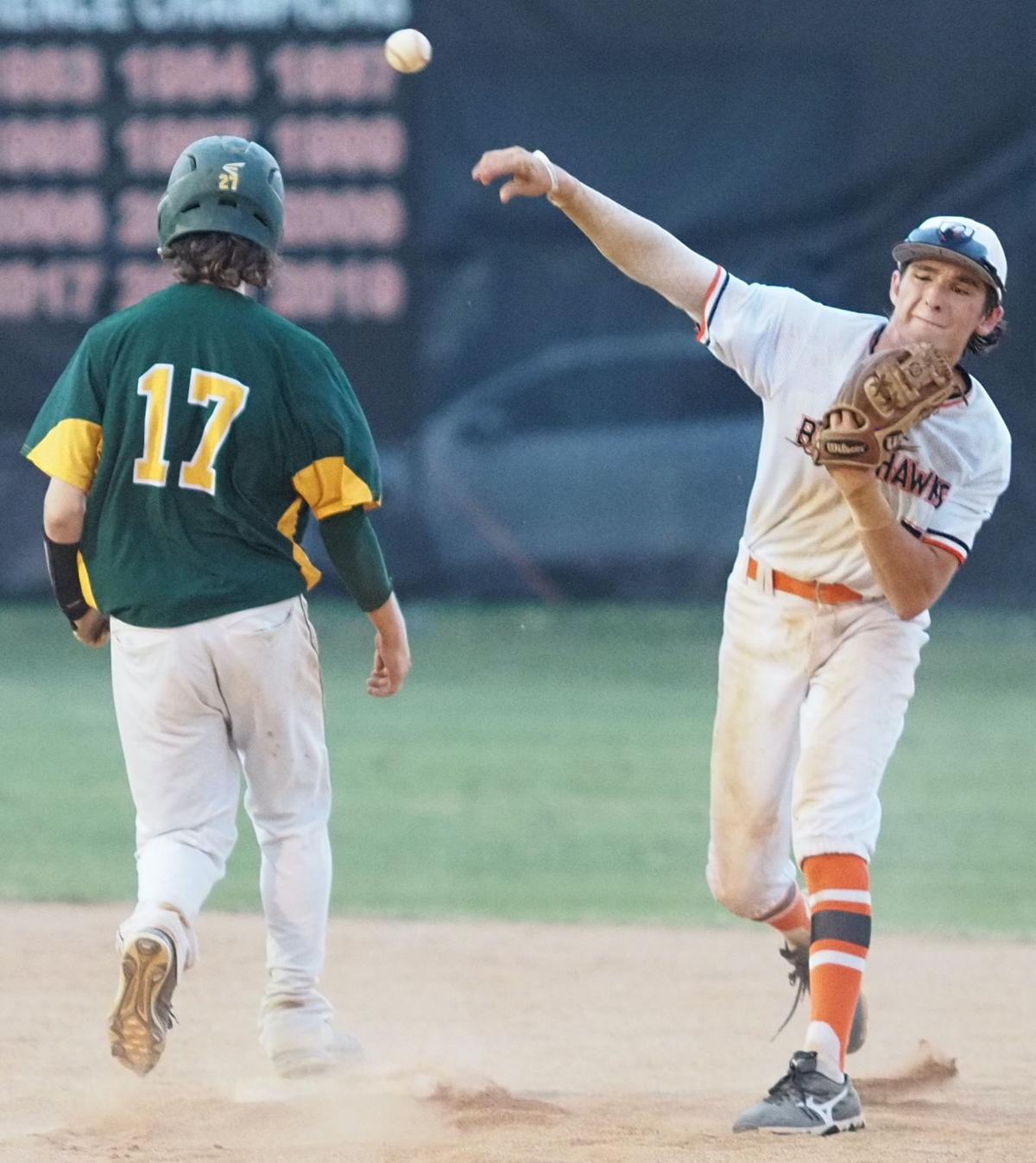 After forcing out Wilkes Central’s Jacob Demeny at second, West second baseman Avery Aiken throws to first in the third inning. Aiken went 2-for-2 at the plate and scored twice during West’s 12-2 win Friday.

West Wilkes’ Trenton Mastin wasn’t expecting a call from the bullpen in the first inning in Millers Creek on Friday, but he responded with three-plus innings of solid work and improved to 2-0 on the season.

West Wilkes’ Izaac McGuire celebrates shortly before crossing home plate after a two-run homer in the first inning of his club’s 12-2 win over Wilkes Central on Friday.

After forcing out Wilkes Central’s Jacob Demeny at second, West second baseman Avery Aiken throws to first in the third inning. Aiken went 2-for-2 at the plate and scored twice during West’s 12-2 win Friday.

The ace on the West Wilkes varsity baseball team lasted only 15 pitches on Friday.

But senior Trenton Mastin admirably answered the surprise call from the bullpen as the Blackhawks cruised to a 12-2 victory over Wilkes Central in Millers Creek.

The league-leading Blackhawks improved to 10-0 in the Mountain Valley 1A/2A Athletic Conference with their seventh-straight win over the Eagles (2-7), who have dropped four straight.

West Coach Drew Ward said that senior Riley Ledford, 4-0 this season and coming off a no-hitter of East Wilkes on May 21, exited the game in the top of the first inning after “some discomfort” in the left bicep of his throwing arm.

“Trenton Mastin did a tremendous job on the mound, coming off of an injury of his own,” said Ward. “It was a really gutsy performance. I thought we played pretty well throughout after the change and a lot of guys stepped up in big spots.”

With two outs, Mastin inherited a runner on second and walked the first batter he faced, Jonah Brooks, but got out of the inning by inducing a grounder to short by Zach Mastin.

West’s Mastin got all the support he needed when the hosts plated five runs in the bottom of the first. Braxton Church led off by reaching on an infield error, stole second, moved to third on Avery Aiken’s single between short and third and scored on Evan Johnson’s sacrifice fly to left. With two outs, Mastin was hit by a pitch and was lifted at first by pinch runner Hudson Severt. A.J. Roten then lifted a fly ball that was overrun in left, scoring Aiken and Severt for a 3-0 West lead.

Five more runs in the third put the game out of reach and led to its suspension after five innings due to the MVAC’s 10-run-advantage rule.

Collin McGuire drew a leadoff walk in the fifth, moved to second on Ben Huffman’s sacrifice bunt and scored on Carson Edmiston’s line-drive ground ball single to right. Aiken’s infield single plated Church, who was hit by a pitch earlier.

Johnson — who delivered a game-high three RBIs — then rapped a line-drive single down the third-base line, scoring Edmiston for a 10-2 lead. On the first pitch from Eagle reliever Weston Inscore, Mastin hit a hard grounder again by third, plating Aiken and Johnson to finish the scoring.

The Eagles plated single runs in the second, after Drew Call’s bloop single to center, and third following Bryce Smithey’s single to left.

Johnson’s fly ball to left in the West second wasn’t tracked down, allowing Edmiston to score. Roten’s two-out liner just past the glove of second baseman Smithey plated Johnson for a 7-1 lead.

Trenton Mastin improved to 2-0 after allowing three hits and two earned runs in 31/3 innings. He walked two and struck out five. Izaac McGuire retired the Eagle side in order in the fifth.

Zach Mastin took the loss for the Eagles, giving up nine hits and six earned runs in 21/3 frames. He walked two and whiffed one. Inscore gave up one hit and struck out one in finishing mound duties for Central.

“This game showed what a team we are, not just a group of players or a tram that relies on only a few guys to win,” added Ward. “It was a great week overall.”

“Defensively, we played very well, especially in clutch situations,” said Dwayne Berrier, the Viking coach. “We had to execute some small ball and steal some bases in order to lock it up and our guys really stepped up. We’re very proud of them right now and hope to continue to improve next week.”

Down 1-0, the Vikings never trailed after scoring three runs in the second inning. Caleb Souther singled to lead off and scored after consecutive walks to Seth Hall, Anthony Welborn and Noah Royall.

Drew Winkler then singled to center, plating Hall, and Dalton Miller lifted a sacrifice fly to center, scoring Welborn. Winkler and Souther each had two of North’s six hits.

Hall had a run-scoring infield single in the third and Souther grounded out to plate Miller for an insurance run in the seventh.

Jesse Farrington, who allowed three hits and one earned run while walking four and striking out seven.

“Jesse gave us probably his best outing of the season,” added Berrier.

The Vikings bettered to 6-4 while the Huskies fell to 3-6 with their fifth-straight loss.

The Cardinals scored a run in the top of the eighth but the Rams responded with two of their own in the bottom of the frame.

East sophomore Brody Martin had two of his club’s eight hits, including a double. Driving in runs for the Cardinals were Briggs Gentry, Hank Porter and Bryson Sidden.

Tate Samples started for the Cardinals and allowed 12 hits and two earned runs in six innings. He walked two and struck out seven. Porter relieved him in the seventh and took the loss.

Alex Williams got the win for the Rams, pitching in relief of starter Austen Jones.

The Rams improved to 8-1 while the Cardinals backtracked to 3-7.

Carson Edmiston blasted a three-run homer to right in the fourth inning to cap the Blackhawk scoring. Earlier in the frame, Grant Ferguson’s double to center plated Collin McGuire, who led off with a walk.

“It was a good win; we played a very solid all-around game and didn’t wait around to do it,” said West Coach Drew Ward. “Our bats came alive, led by Carson, but we never really slammed the door.”

Evan Johnson (1-0) got his first start of the season and responded by allowing four hits and a single unearned run in 52/3 innings.

The junior walked two and struck out four. Izaac McGuire finished on the mound, walking two and whiffing one.

“We had good showings from Evan and Izaac on the mound, who kept their offense in check,” added Ward. “If we take out some baserunning and mental errors we might have tacked on a few more runs.”

The Blackhawks (9-0) jumped on the hosts with two runs in the first. Braxton Church led off with a single to left and courtesy runner Hudson Severt took third on Edmiston’s double.

Severt scored on Riley Ledford’s groundout to second. Edmiston took third on the play and touched home after Elkin starter Matthew Beshears was called for a balk.

West added a run in the third, after Edmiston reached on an infield error, moved to second on a groundout and scored on A.J. Roten’s line-drive single to center.

The Blackhawks improved to 9-0 while the Buckin’ Elks backslid to 4-5.

“It was a good win and everyone hit the ball well,” said East’s coach, Justin Call. “Bryson Sidden pitched well with a complete game two-hitter. Everyone in our lineup contributed and played hard. I’m proud of our effort.”

Sidden threw 74 pitches in five innings, walking none and striking out seven.

The Cardinals jumped on Central starter Jacob Demeny with nine runs in the first inning. Briggs Gentry doubled with one out, Trenton Rhodes singled and Tate Samples drove in both with a triple.

Seven more runs—including six of the unearned variety—were plated with two outs in the first, after a double by Sidden and singles by Bryson Shore, Brennan Arnder, Samples and Gentry, who scored twice in the frame.

Sidden added a two-run triple in the second, en route to a game-high three RBIs. Samples finished 3-for-4 at the plate with two triples.

The Eagles scored their lone run in the fourth.

Jonah Brooks led off by reaching on a wild third strike from Sidden and eventually scored on Bryce Smithey’s double. Brody Johnson had the other hit: a leadoff single in the first.

Demeny took the loss and was relieved by Weston Inscore after two innings of work.

With their first season sweep of Central since at least 2008, the Cardinals bettered their mark to 3-6 while the Eagles regressed to 2-6.

Dalton Miller starred in the tops and bottoms of North Wilkes’ 14-0 shutout of Alleghany in Hays on May 25.

“It was a good team effort,” said Dwayne Berrier, the Viking coach. “We started off well, being patient at the plate and playing solid defense before the storm came through and delayed the game. You never know how teams will respond after a long stop in play like that, so we challenged our guys to go back out focused and they did just that.”

Miller, a senior right-hander, allowed only one hit in the game, which was shortened to five innings due to the league’s 10-run-advantage rule. He walked five and struck out seven in improving to 3-1.

“Dalton had another solid night on the mound, defense played well behind him, and I was pleased with all of our guys at the plate,” added Berrier.

At the plate, Miller went 4-for-4 with a double and drove in three runs.

After Miller’s two-out double plated Winkler in the second, the Vikings tacked on five more runs in the fourth, with Miller, Hall, Anthony Welborn, Royall and Winkler producing RBI singles.

The Vikings improved to 5-4 while the Trojans, coming off their first win of the season against Ashe County, slipped to 1-7.

Partly cloudy skies in the morning will give way to cloudy skies during the afternoon. High 86F. Winds light and variable.

Partly cloudy during the evening. A few showers developing later during the night. Low near 65F. Winds light and variable. Chance of rain 30%.

A few clouds from time to time. Low 66F. Winds light and variable.