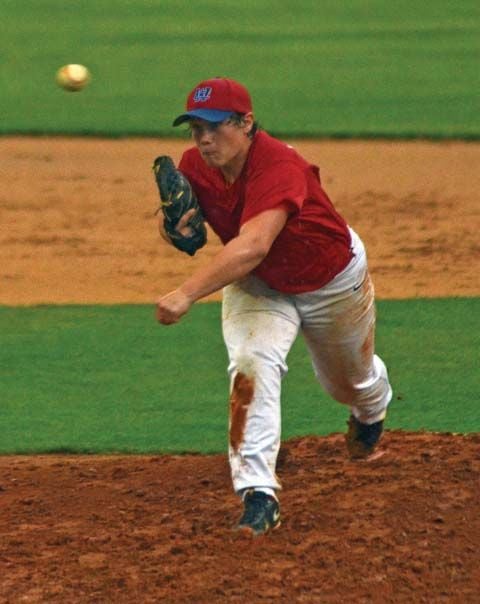 ANDREW ELMORE pitched four innings for Post 31 during its 5-4 win on Tuesday night. 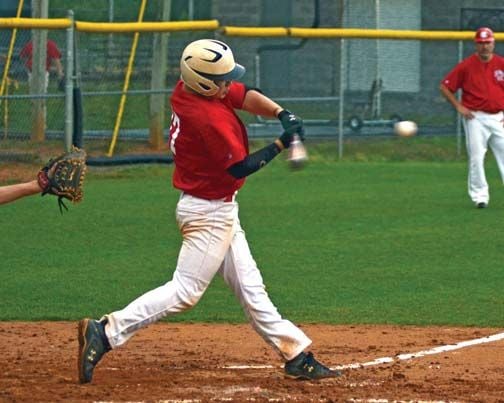 LANCE PARKER makes contact on a pitch in the third inning.

ANDREW ELMORE pitched four innings for Post 31 during its 5-4 win on Tuesday night.

LANCE PARKER makes contact on a pitch in the third inning.

With the game between the Wilkes County Post 31 Junior Legion Patriots and West Forsyth’s Green team tied at four runs apiece in the bottom of the seventh inning, catcher Skylar Brooks stepped to the plate for the Patriots.

Brooks’ teammate, Ezra Baker was standing on third base representing the game-winning run. Baker led off the inning with a walk and took second on a passed ball. He slid just underneath a tag a third base as Noah Johnson struck out to set the stage for Brooks.

Brooks took a first-pitch ball and then turned on the next delivery sending a rocket to left center field and giving the Patriots a 5-4 walk-off win Tuesday night in Moravian Falls.

“You’re down there late in the ball game, you just keep pounding,” Post 31 manager Terry Johnson said. “You keep swinging the bats, you keep running the bases, doing the things that you are supposed to do and that you know how to do. We had a good feel for the base running there too… it was big getting to third base there and then we had a big stick at the plate too.”

Brooks had two hits in the game for the Patriots, as did Trey Blevins who played shortstop. West Forsyth had just two hits as a team thanks to the efforts of starting pitcher Andrew Elmore, a lefty, and reliever Ethan Adams, a righty.

Elmore worked the first four innings and allowed four runs on two hits but three Post 31 errors inflated those numbers. He had three strikeouts including the first batter of the game.

Adams worked the final three innings and did not allow a single hit and allowed just one base runner. The lone base runner was Dalton Curson as he reached on a walk in the top of the seventh. Curson made it to third base but Blevins stuck with a bobbled ball and threw Jalen Austin out at first to end the threat.

Adams had four strikeouts in his three innings of work.

“I thought our pitchers pitched well, well enough to win,” Johnson said. “I thought Ethan came in there late in the game and threw strikes and filled the zone up. His curveball was working pretty good and they were swinging at it and missing. We got the right kids for him at the plate there in the last inning. He did a good job and I thought Skylar did a good job behind the plate blocking balls in the dirt.”

The visitors struck first in the ball game with a run on an error in the first inning and two more runs in the third inning. Post 31 loaded up the bases in the bottom of the third with three singles in a row but only scored one run and it came on a walk to Brooks.

After West Forsyth added another run in the top of the fourth, the Patriots loaded up the bases again in the bottom of the fourth and this time they converted that into three runs to tie the score.

The Patriots are now 1-1 on the year but have yet to play a conference game. Post 31’s first conference game is set for June 9 and by that time the roster must be trimmed to 18 players from the 23 that are playing now.

“We’re glad for them,” Johnson said of his team after the walk-off win. “They came back and got our first win and everybody played and everybody got a chance to swing the bat and see some more of what we are looking for and what we are trying to do. We saw a lot of good things.”

Notes: Post 31 will see the same West Forsyth Green team again today as they are scheduled to play at West Forsyth High School at 6 p.m. The Green team is not technically affiliated with the American Legion as they are the second team from West Forsyth and so they play as an independent. The West Forsyth Blue team is in Post 31’s conference and they will meet on June 25 and 26.

A few clouds from time to time. Low 58F. Winds light and variable.