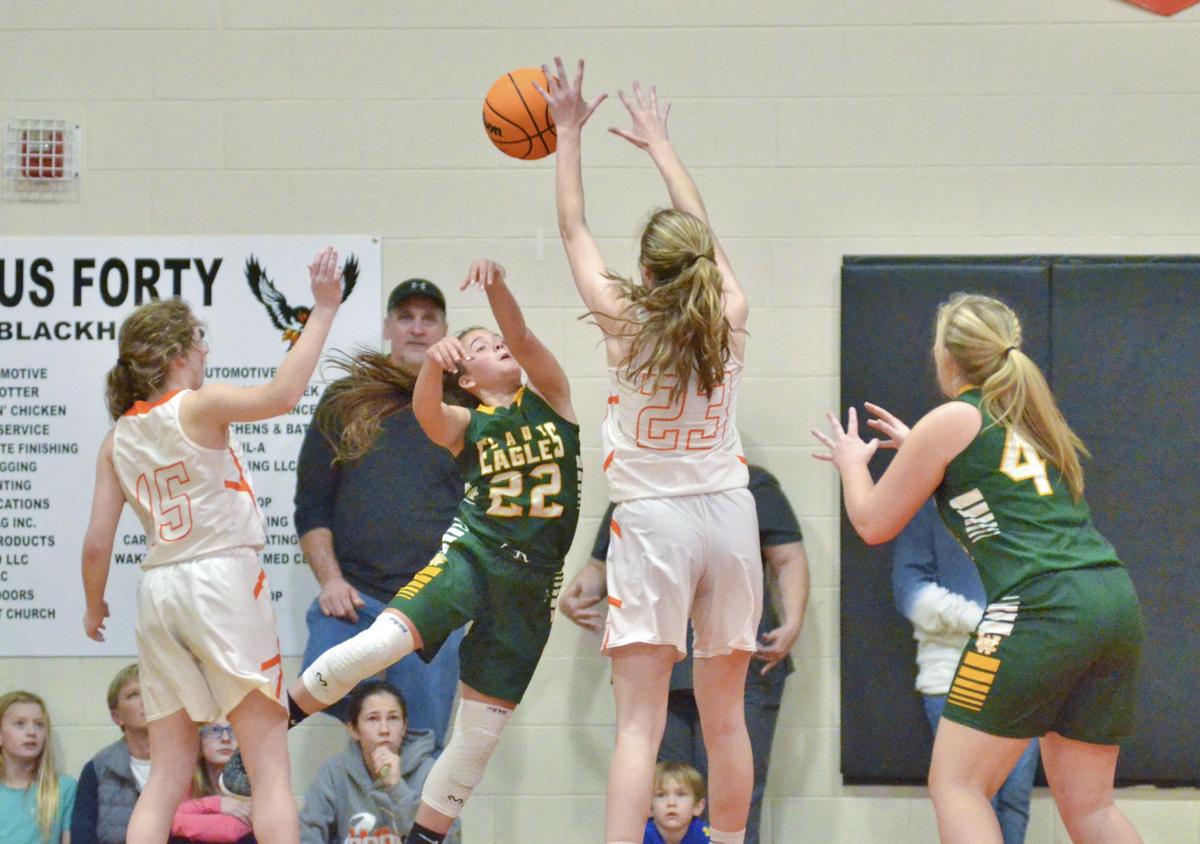 Zoe Susi, of Wilkes Central, looks to pass out of the double team of West Wilkes' Kendall Stanley and Cheyenne Clonch in the second half of Tuesday's game. Also in the photo for the Eagles in Madison German. 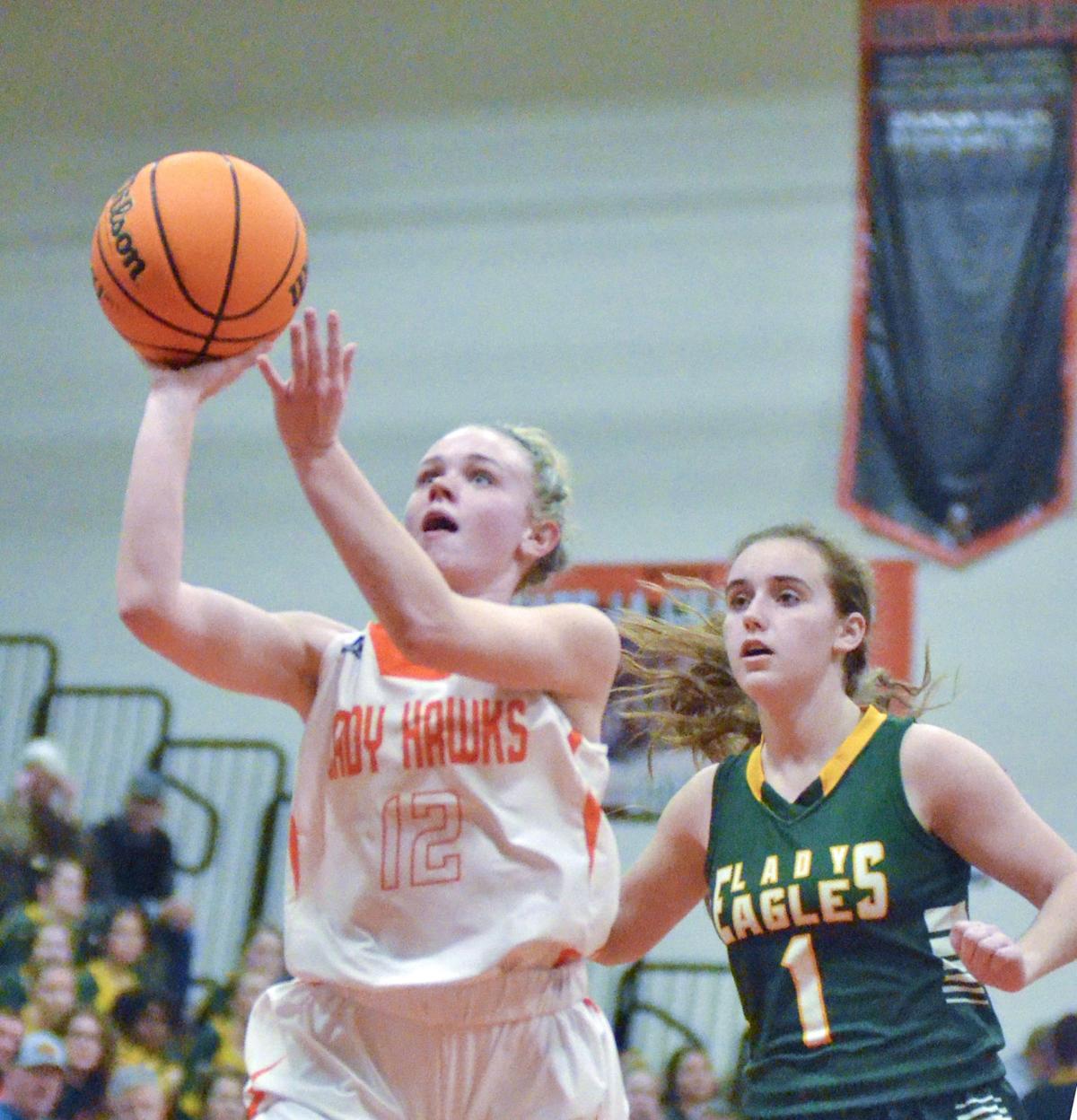 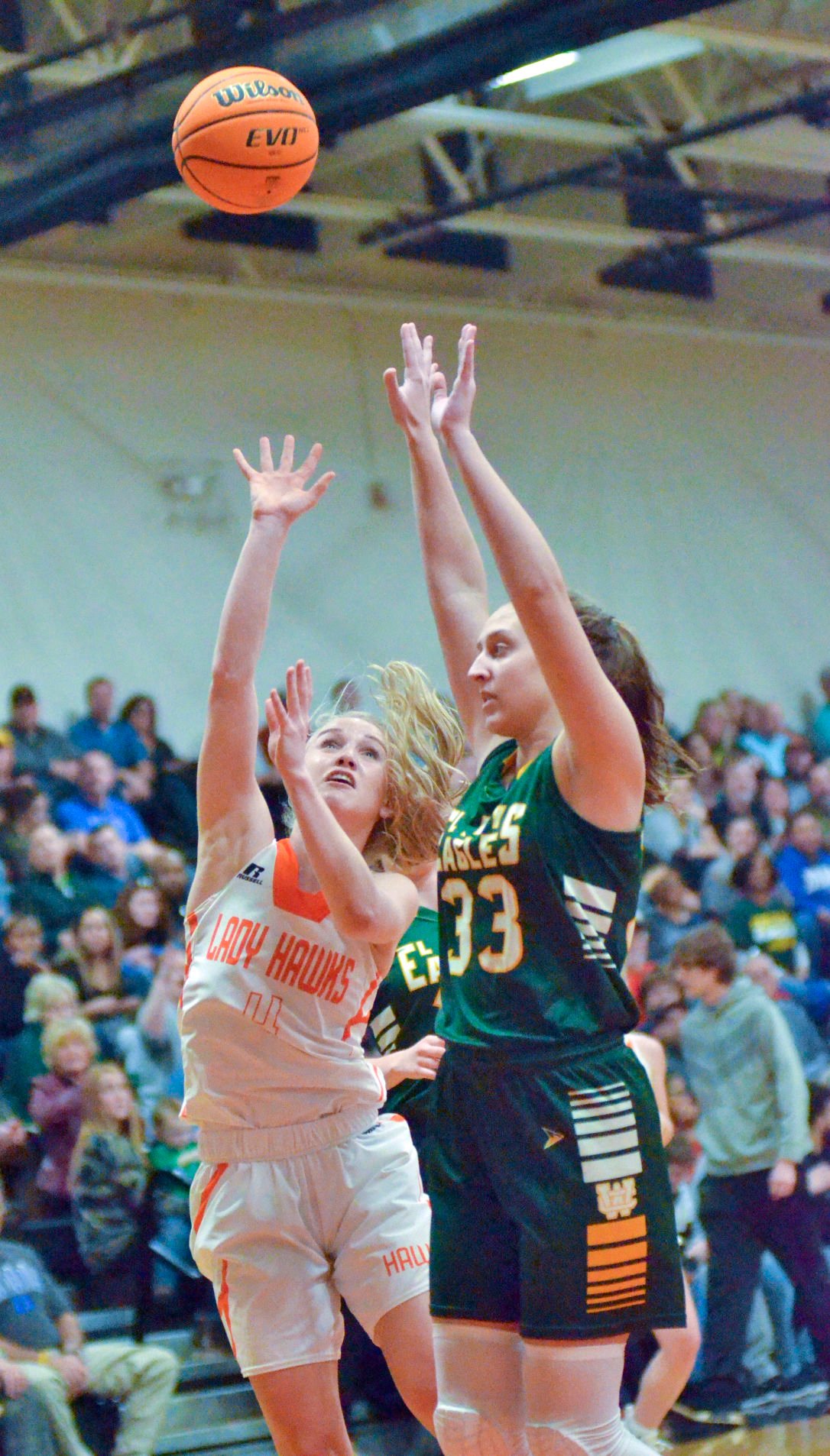 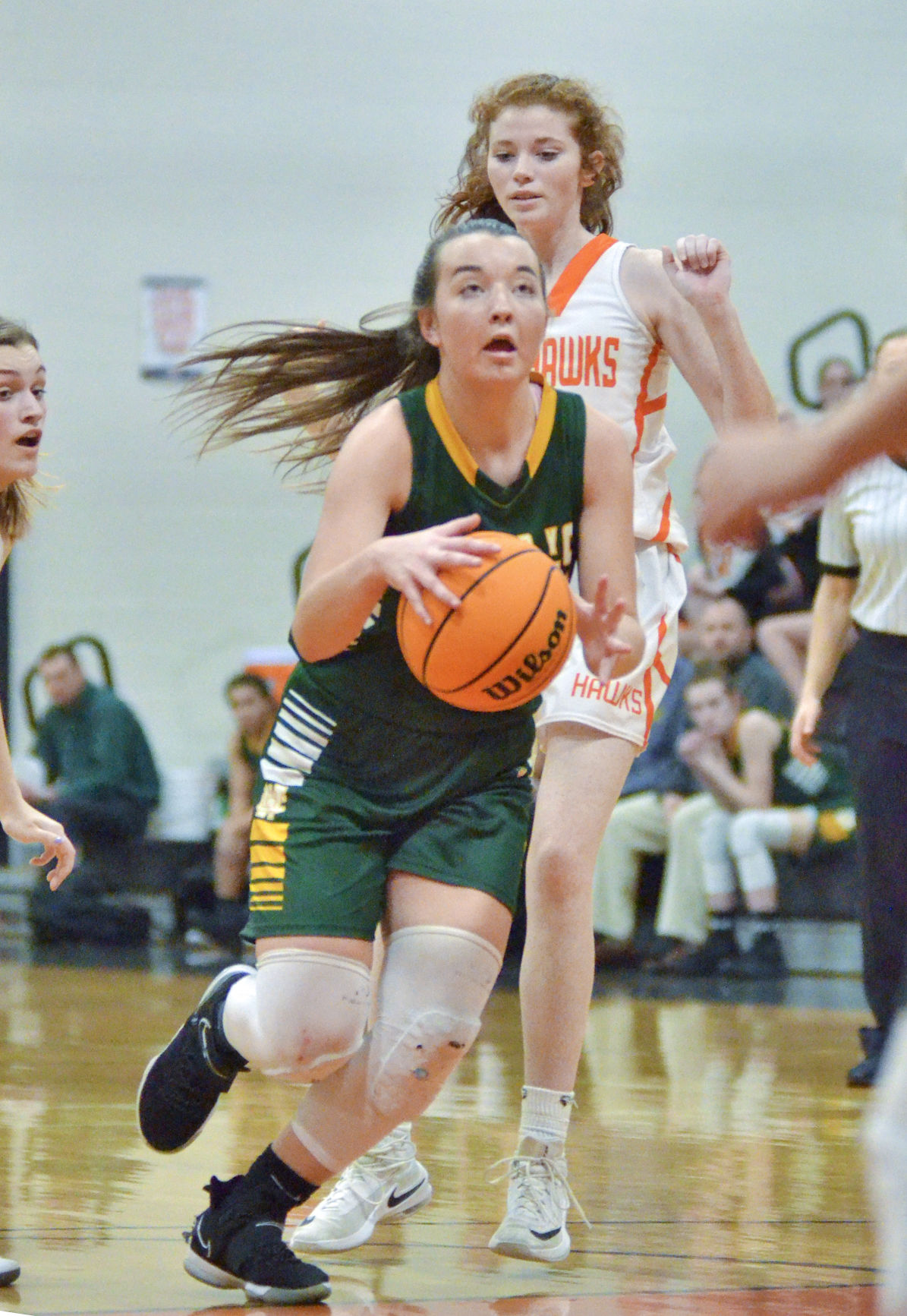 WILKES CENTRAL’s Sarah Lowe drives down the lane, past West Wilkes’ Gracie Lambert for two of her team-high 10 points on Tuesday night.

Zoe Susi, of Wilkes Central, looks to pass out of the double team of West Wilkes' Kendall Stanley and Cheyenne Clonch in the second half of Tuesday's game. Also in the photo for the Eagles in Madison German.

The West Wilkes girls basketball team hosted the league-leading  Wilkes Central Tuesday night in Millers Creek, looking to atone for a defeat to the Eagles earlier this month.

For the Blackhawks, the Mountain Valley Athletic Conference co-champs last winter, the game was critical for them to have a chance to repeat as champions.

Boosted by aggressive defensive play, West Wilkes posted a 52-36 victory to move within a game of the Eagles for the league’s top spot. Central had been undefeated in MVAC play prior to Tuesday.

“I think we did a better job executing our game plan tonight. This game was won on the defensive end,” said West Wilkes Head Coach Allie Greene. “We only scored two more points tonight than when we lost at Wilkes Central, but defensively we held them to 36 instead of 61.”

West broke out to a 4-0 lead that it never relinquished. Jamilyn Wilcox and Carson Ledford scored six and five points, respectively, in the quarter to stake the ’Hawks to a 13-7 advantage.

With the strong defensive play, West (15-3, 8-2) held the Eagles to 2-of-13 from the field while Ledford blocked three shots.

“We were definitely outplayed tonight. We weren’t ready to play. There was no sense of urgency tonight,” said Wilkes Central Head Coach Greg Davenport. “We had it for about three minutes to start the fourth quarter; we started penetrating the zone and kicking out and made a few shots.”

The third quarter saw the ’Hawks outpace Wilkes Central 14-3. Again, the West defense limited the visitors to a single field goal and one free throw in the stanza. West shared the wealth offensively as four different players score.

The Eagles made a run to open the final period and cut the 16-point lead to nine in the first two minutes. The Blackhawks slowed down the run as they connected on 8-of-10 free throws in the final four minutes to rebuild the lead. Jamesyn Bell went 4-for-4 from the line and Parker Childress hit a pair to go along with Wilcox who made  2-of-4.

Wilcox led all scorers with 17 points and Ledford backed her with 12. Sarah Lowe led the Eagles with 10 points.

“That’s the Jamilyn we have to have every game,” said Greene. “Jamesyn (Bell) did a great job running our offense and being perfect at the foul line down the stretch. She led us offensively and handled the ball against their pressure.”

Wilcox’s play also impressed Davenport, whose team has a big game tonight at Alleghany. The Eagles hold a one-game lead on both the Blackhawks and the Trojans with four to play.

West Wilkes, which travels to Starmount tonight, and Alleghany will square off in Millers Creek a week from tonight.

“She didn’t have a great game at our place but she played well tonight,” said Davenport of Wilcox. “After the game I told the team that we still control our own destiny. We just have to go take care of business.”

In the JV game, Wilkes Central led by 15 points after three quarters and held off a spirited comeback from West Wilkes for a 33-31 win.

The Eagles, who improved to 12-3 and 8-2 in the MVAC, were led by 17 points from Jayla Smoker and six from Katie Nichols. Tori Teague paced the Blackhawks (8-5, 6-4) with nine points and Allison Little and Lexie Huffman added eight and seven, respectively.

Cloudy in the evening, then off and on rain showers after midnight. Low 44F. Winds light and variable. Chance of rain 40%.