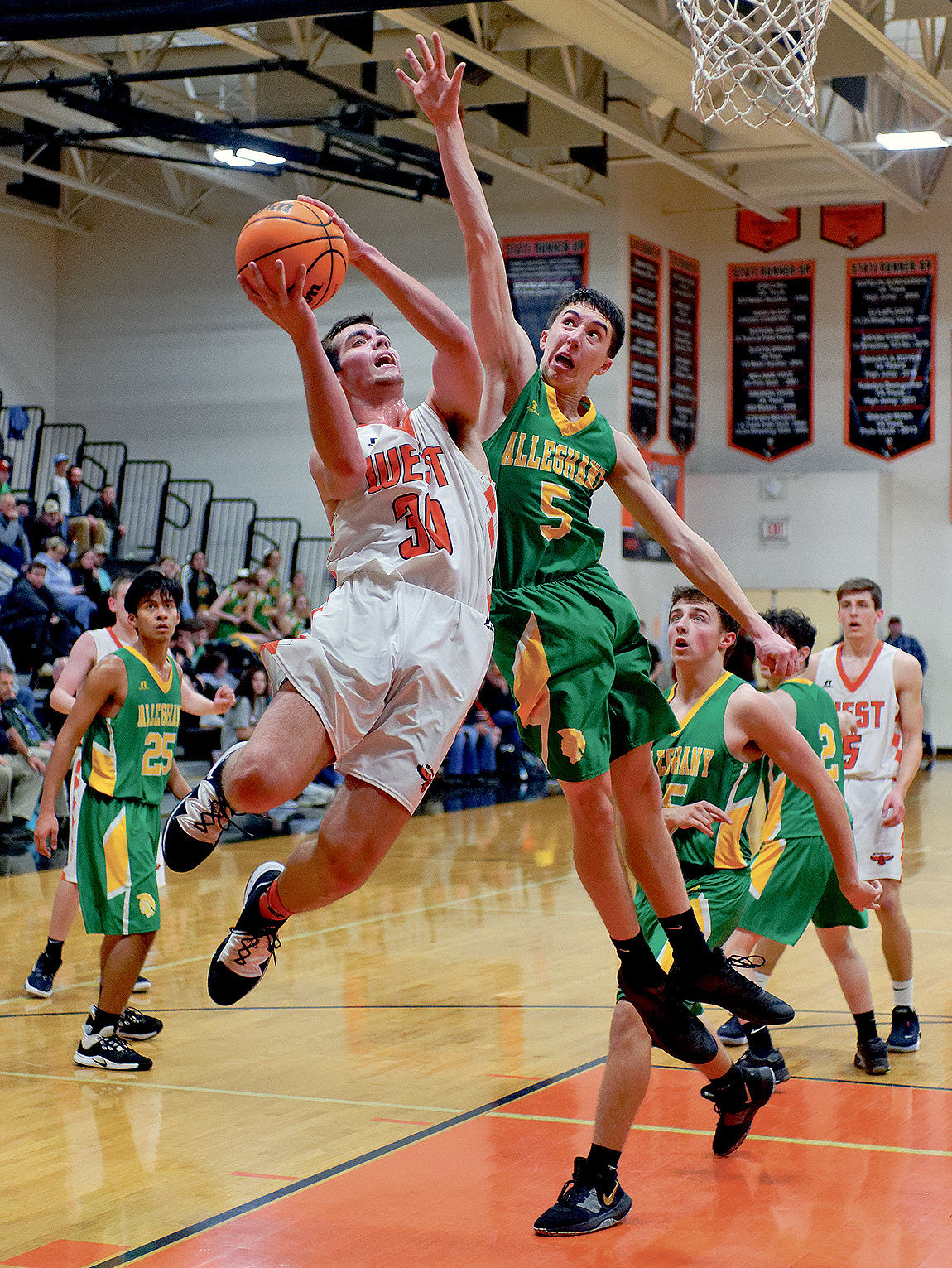 WEST WILKES’ Jackson Stinson is fouled as he puts up a shot against Alleghany’s Blake Murphy late in the third quarter. Stinson scored a game-high 23 points for the Blackhawks. 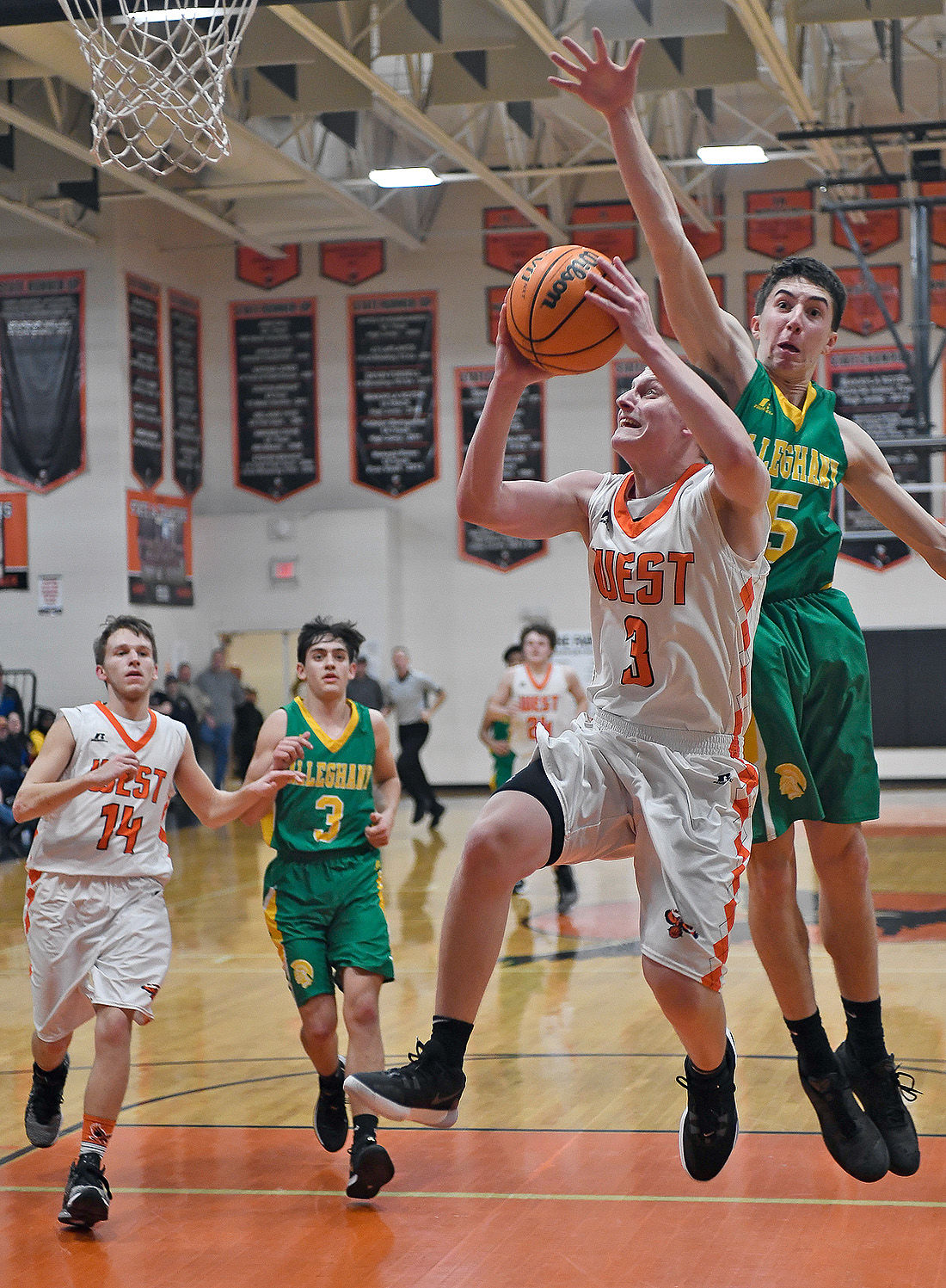 West Wilkes’ Jacob Brown drives to the basket in the second half as Alleghany’s Blake Murphy tries for the block. Austin Triplette and Jared Foley trail the play. 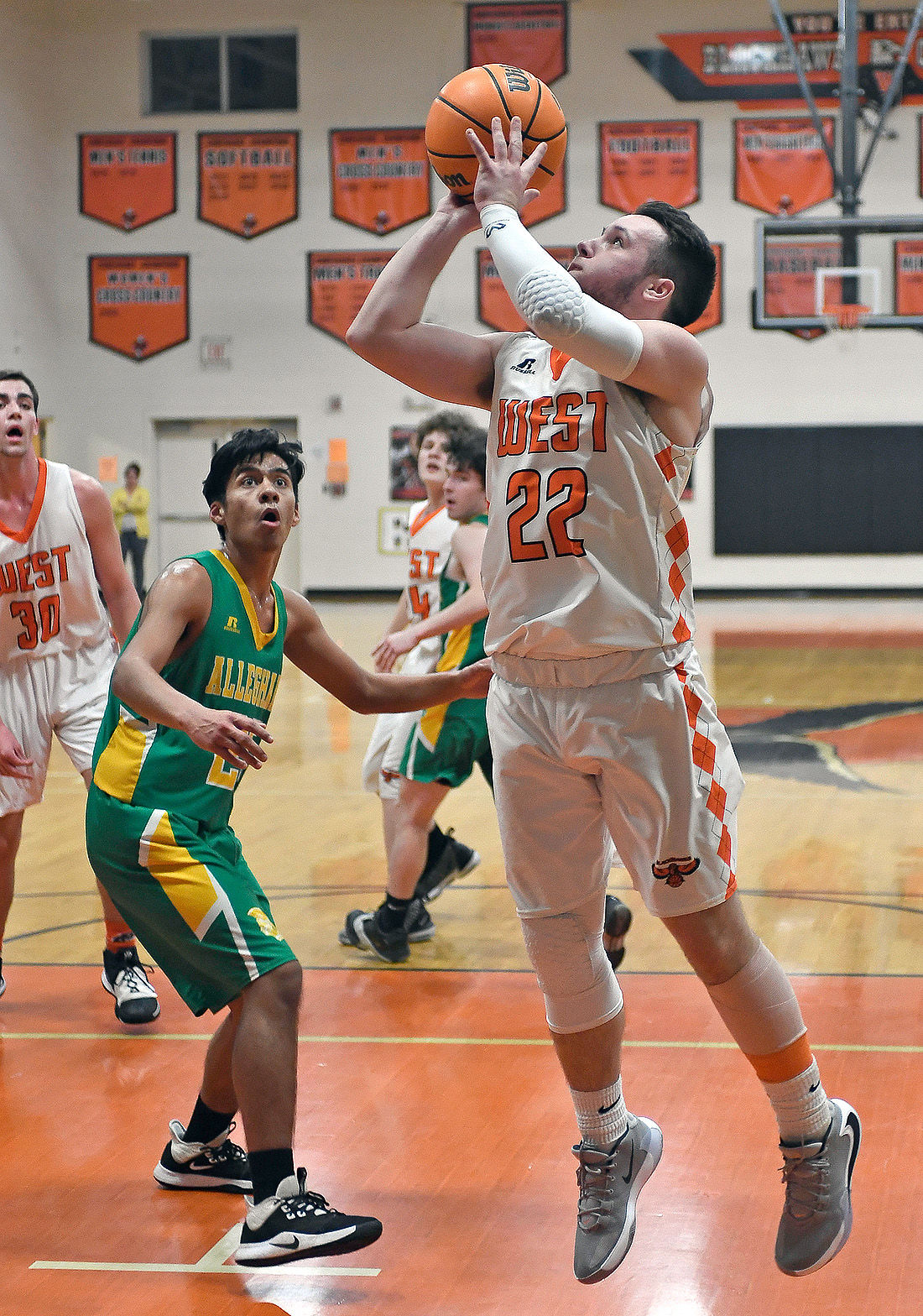 West Wilkes’ Jaden Wentz drives to the basket past Alleghany’s Julio Arroyo in the first quarter.

WEST WILKES’ Jackson Stinson is fouled as he puts up a shot against Alleghany’s Blake Murphy late in the third quarter. Stinson scored a game-high 23 points for the Blackhawks.

West Wilkes’ Jacob Brown drives to the basket in the second half as Alleghany’s Blake Murphy tries for the block. Austin Triplette and Jared Foley trail the play.

The West Wilkes boys are back on track.

But it might be a case of too little, too late. Or maybe not.

West Wilkes won for the second straight game and for the 12th time in its past 15 games, improving to 14-7, 10-3 in the Mountain Valley Conference.

Alleghany lost its third straight game and fell to 8-15, 3-10 in the conference. With East Wilkes’ win at Elkin, the Trojans drop to seventh place.

With one game to play, the Blackhawks trail Wilkes Central—which beat Ashe County at home—by one game, and they trail Starmount by a half-game. Starmount’s game with North Wilkes was postponed by weather issues and made up Monday night.

The Blackhawks will need help to win a share of the conference title. West Wilkes must win at Ashe County Tuesday and Wilkes Central will have to lose at Elkin in both teams’ final regular-season games. Also, Starmount must lose either to North Wilkes or at Alleghany in its final two games.

The Blackhawks’ conference record is two games better than through 13 games a year ago, but their season may be defined by the three-game losing streak that knocked them out of sole possession of first place.

“We lost three games by a total of seven points—lost two heartbreakers, one in double overtime and one here to a rival,” said Scottie Greene, the West Wilkes coach. “Don’t get me wrong. It’s our own fault.

West Wilkes had an 18-8 lead after one quarter, only to lose it all in a frenetically-paced second quarter. Jared Foley, who led the Trojans with 10 points, had nine points, two of his six steals and an assist in an 18-6 run. Foley’s second steal and subsequent basket gave Alleghany a 26-25 lead.

But Brown, who Greene said is the best player he has ever coached, scored the Blackhawks’ last six points of the first half. His fallaway 16-footer gave West Wilkes a 28-26 lead, and his long jumper on an inbounds play off a Jackson Jarvis assist made it a four-point game at halftime.

A change in defense—and Stinson’s strong second half—put the Blackhawks in control.

Stinson and Austin Triplette combined for six points to start the third quarter, and from there West Wilkes started using full-court pressure, leading to an 8-2 run over the final three minutes of the quarter.

“They had trapped us some, and we had tried to fix that at halftime, but apparently I didn’t do a good enough job,” said Tommy McKnight, the Alleghany coach. “We knew the trap was coming, and we were a little bit too impatient, and we turned it over too many times.

“The third quarter just ruined us.”

Greene said, “We started playing defense, and we were active on defense. We started pressuring the basketball.

“In the first half, Alleghany played well… and we didn’t have a lot of energy. In the third quarter, we moved offensively and defensively.

“Our defense was the difference.”

Triplette and Dylan Miller had baskets in the run, which was capped by Brown’s pull-up 15-footer that gave the Blackhawks a 44-30 lead.

The rest was Stinson.

The senior post player scored 11 of his team’s 17 fourth quarter points, including five points in a span of four possessions to make it 51-32 with 5:40 to play. Stinson was 7-for-7 from the field for the game.

“He just ran wild on us tonight,” McKnight said of Stinson. “We didn’t have an answer for him.”

The Blackhawks still have the mathematical chance to win what would be a share of their first conference championship since 1991, and their record is already the best in Greene’s tenure as coach.

“You’ve got to get hot at the right time,” said Greene, whose team has won its past two games by a combined 36 points, “with us trying to get hot right now heading into that (conference) tournament.

Notes: The Blackhawks have won three in a row and seven of the past eight meetings against the Trojans…. West Wilkes shot 59 percent from the field for the game and hit 11 of 12 free-throw attempts…. Jarred Cornette, an Alleghany assistant coach and an East Wilkes alumnus, represents the third generation of his family to be a basketball coach. His father, Ritchie Cornette, played at Alleghany and won multiple championships in both the Blue Ridge and Northwest conferences as a coach at East Wilkes. His grandfather, Arvil Cornette, coached at Alleghany in the 1970s. Ritchie Cornette is currently the principal at Mulberry Elementary....West Wilkes also captured the JV game 44-35 and improved to 14-5 overall and 8-5 in MVAC play.

Intervals of clouds and sunshine. High near 55F. Winds light and variable.