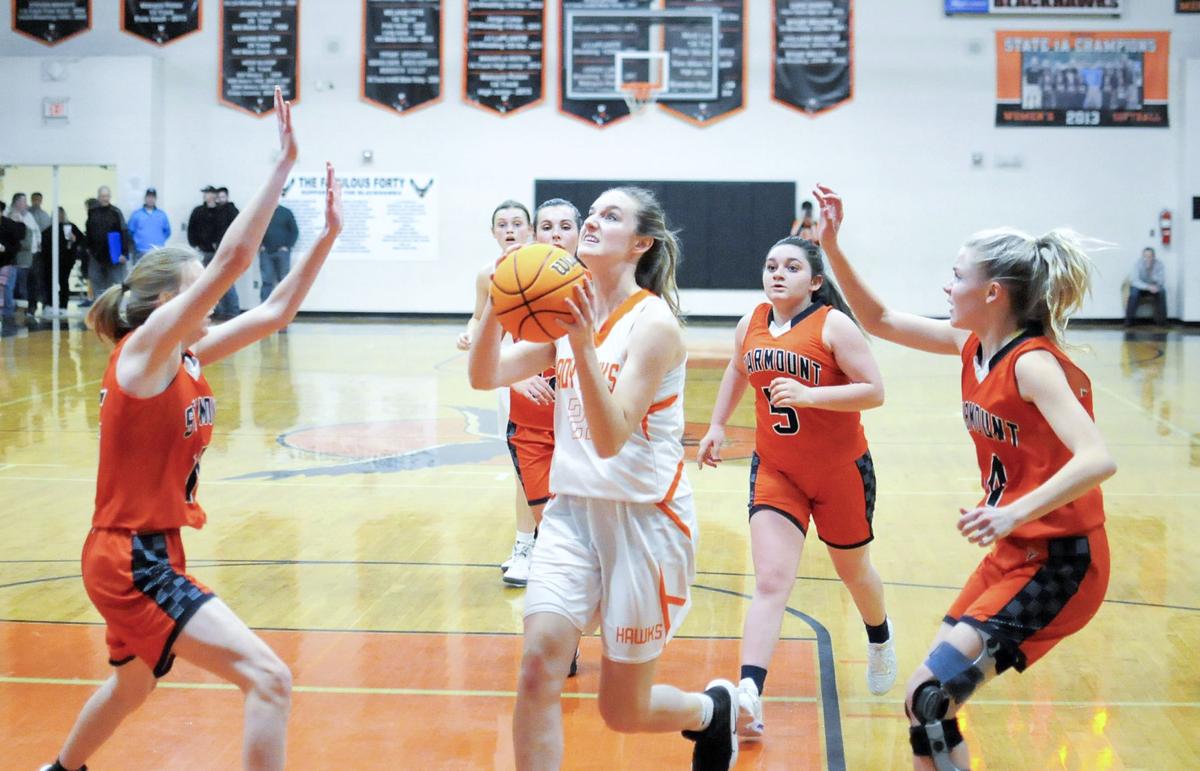 CHEYENNE CLONCH goes up for a shot against Starmount’s Taylor Payne, Katlyn Walker and Emily Brewer in the second half of West Wilkes’ win against the Rams on Tuesday night. 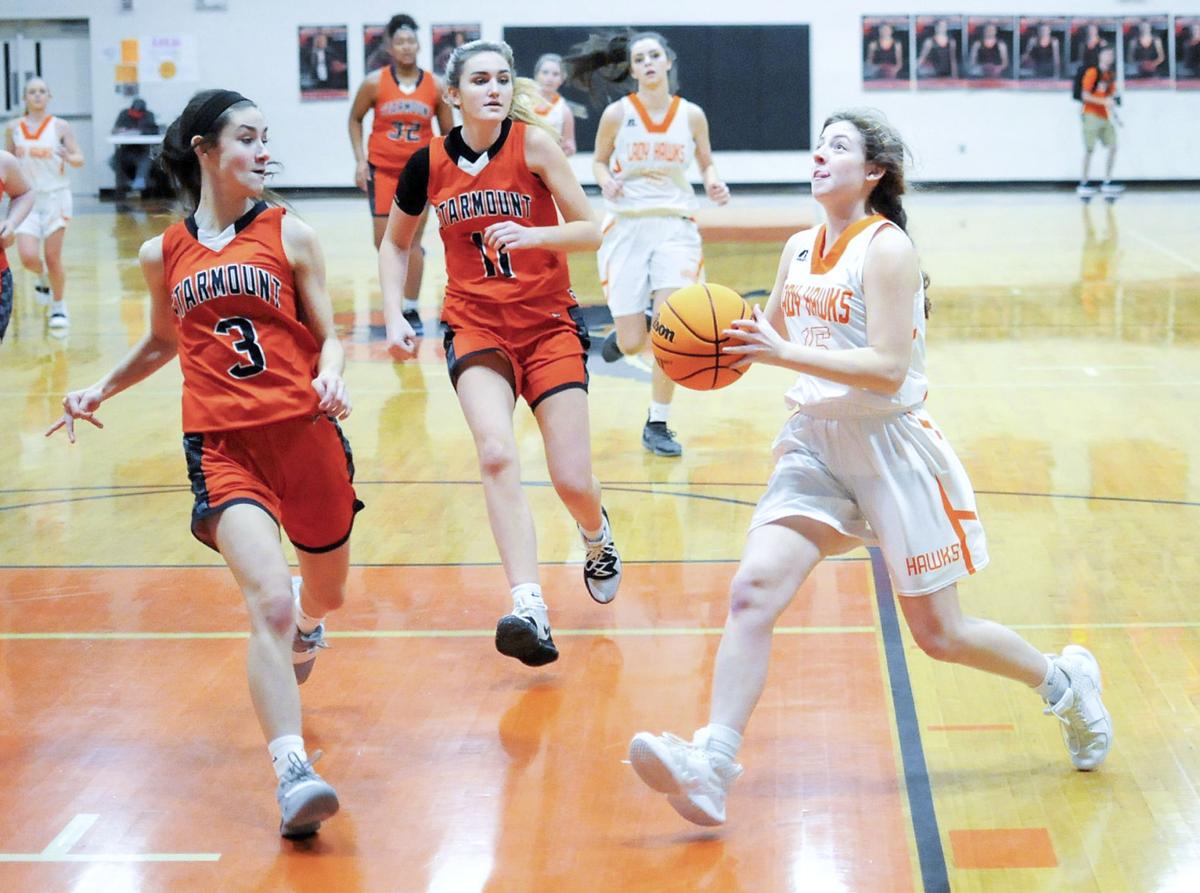 KENDALL STANLEY drives to the basket against Starmount’s Maddie Norman (3) and Tanna Seagraves in the first half of Tuesday night’s win. Stanley paced West Wilkes with a game-high 11 points. 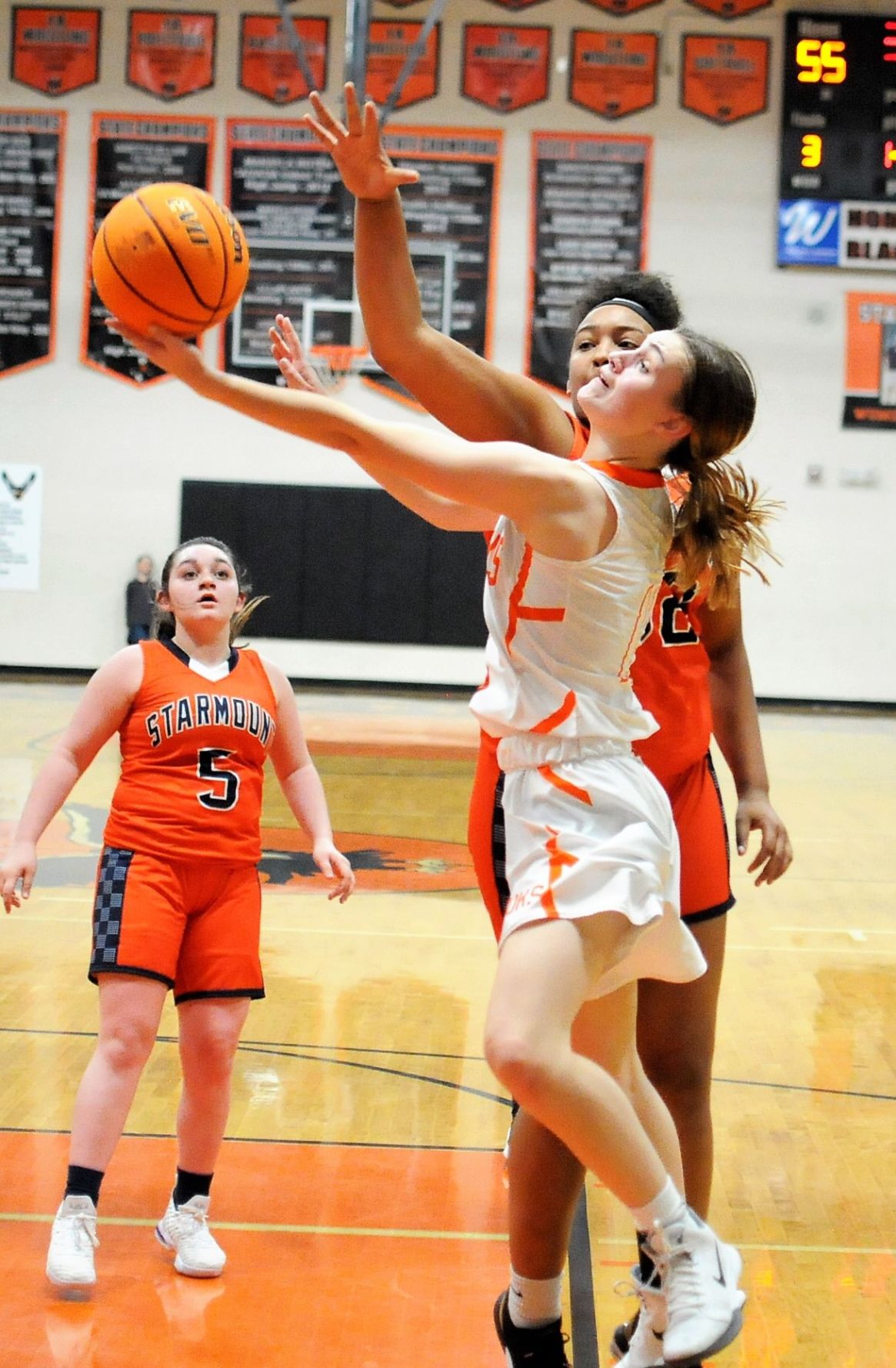 Parker Childress, of West Wilkes, goes in for basket against Starmount's Olivia Gwyn. 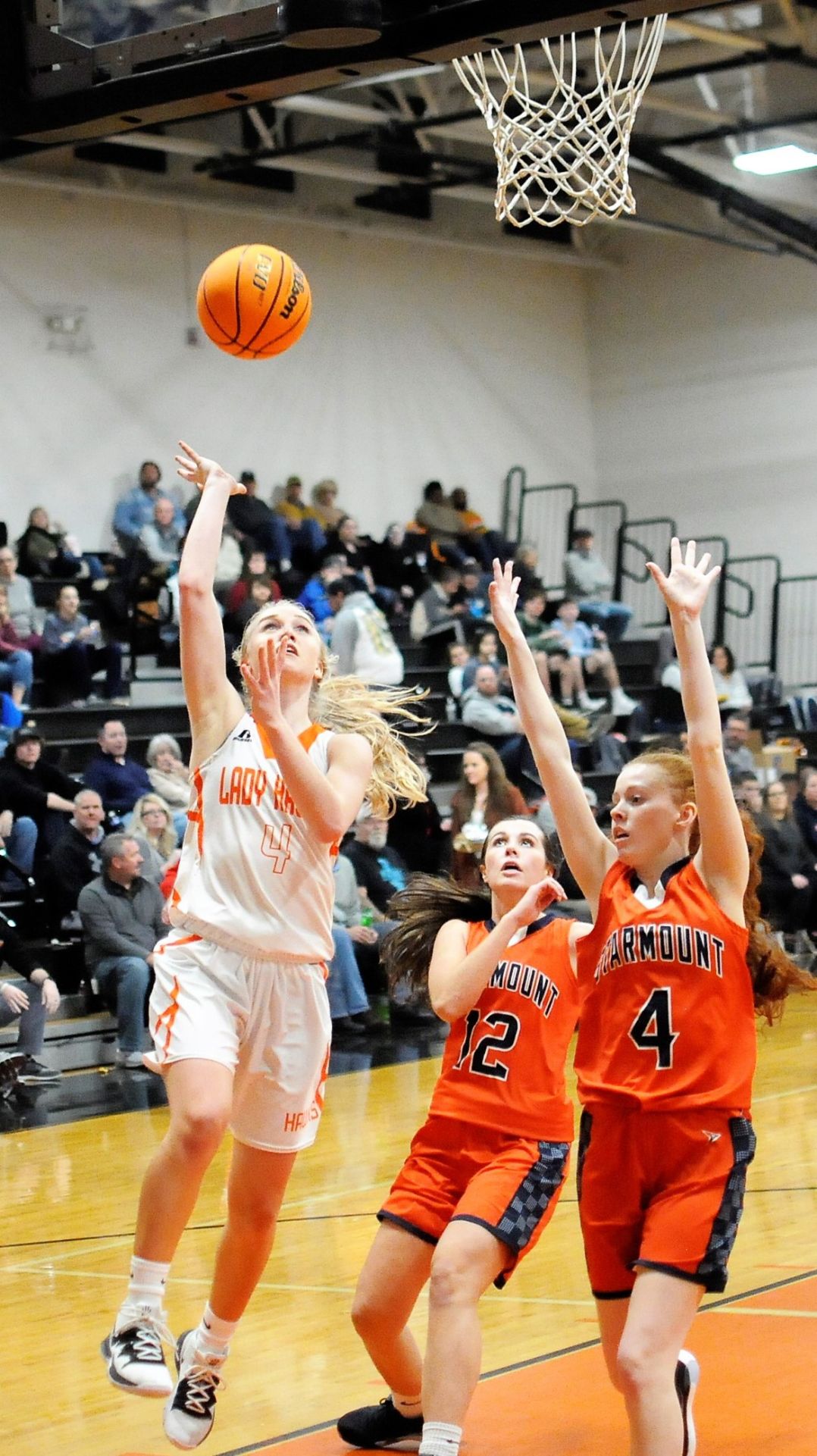 Jamilyn Wilcox drives to the basket in the first half of West Wilkes' win on Tuesday night.

CHEYENNE CLONCH goes up for a shot against Starmount’s Taylor Payne, Katlyn Walker and Emily Brewer in the second half of West Wilkes’ win against the Rams on Tuesday night.

KENDALL STANLEY drives to the basket against Starmount’s Maddie Norman (3) and Tanna Seagraves in the first half of Tuesday night’s win. Stanley paced West Wilkes with a game-high 11 points.

Parker Childress, of West Wilkes, goes in for basket against Starmount's Olivia Gwyn.

Following a perfect nine-game start to the season, West Wilkes found itself in need of some home cooking after suffering a two-game road losing streak.

Suffice it to say, after feasting on the Starmount Rams Tuesday night in Millers Creek, the Blackhawks are again headed in the right direction.

Jamilyn Wilcox, Kendall Stanley and freshman reserve Parker Childress all scored 11 points to pace the Hawks, now 10-2 overall and 3-1 in league play. Nine of the 10 players who suited up Tuesday for Head Coach Allie Greene scored at least three points.

“The girls did a great job all night long with their defensive intensity. We actually changed the game plan a little bit prior to this game, and we executed it well,” said Greene. “We got transition baskets off our defense, and we also shot the ball well from the perimeter,” continued Greene. “And once we established the perimeter game, that opened things up more for us in the middle.”

Six different Blackhawks sank a three-point basket Tuesday, which made it easier for drives to the basket and provided post scoring opportunities for the likes of Carson Ledford and Cheyenne Clonch, who finished with seven and six points respectively.

“It’s nice when you have several putting the ball in the hole,” said Greene. “That balance makes the offense flow a lot easier. And the opposition can’t just key in on one or two players.”

West Wilkes scored the first six points of the night, beginning with two free throws from Ledford after she was fouled by Starmount’s Katlyn Walker.

But the visitors hung tough in the first quarter. A pretty up and under hoop from Starmount’s Emma Freed first put the Rams on the scoreboard, and the margin was only 12-6 after the first period of play.

However, the game turned quickly in favor of the home team at the onset of the second quarter. A midrange jumper from the right from Gracie Lambert started the second period scoring and by the time Stanley had drilled a 3-pointer from the left wing with 2:50 left before the intermission, the Hawks had gone on a 17-0 run.

Olivia Gwyn finally stopped the run with a nice move on the right box for a hoop, but by then it as too little, too late. The Blackhawks took a 31-14 advantage into the halftime locker room, and the visitors could never recover in the second half.

Freed and Gwyn both scored seven points Tuesday to lead the Rams. But Starmount’s offense struggled all night long, as West held the Rams to no better than single-digit scoring all four quarters. The Rams also made only one three-pointer, and only got the line four times, compared to 16 attempts for the Hawks.

“We feel like we learned from our mistakes,” said Greene, referencing the now-broken two-game losing streak. “Yesterday’s practice was one of our better ones. The practice, the film session…we had a different intensity about us yesterday in everything we did, and I think tonight was a direct result of that.”

The Blackhawks next face North Wilkes on the road in Hays tonight. North is 1-3 in league play after a Tuesday win at Elkin. The Vikings beat the Hawks twice last year in the regular season but fell to West 44-41 in the semifinals of the conference tournament.

Starmount lost a Wednesday nonconference matchup against Forbush 61-15, and now stand at 3-9 overall and 1-3 in league play. Tonight, the Rams host Wilkes Central. The Eagles are undefeated so far in the conference.

Starmount won the afternoon’s JV contest over the Blackhawks by a score of 36-31. Layken Mathis led the Rams with 14 points. West Wilkes is now 2-2 in the MVAC with the loss.