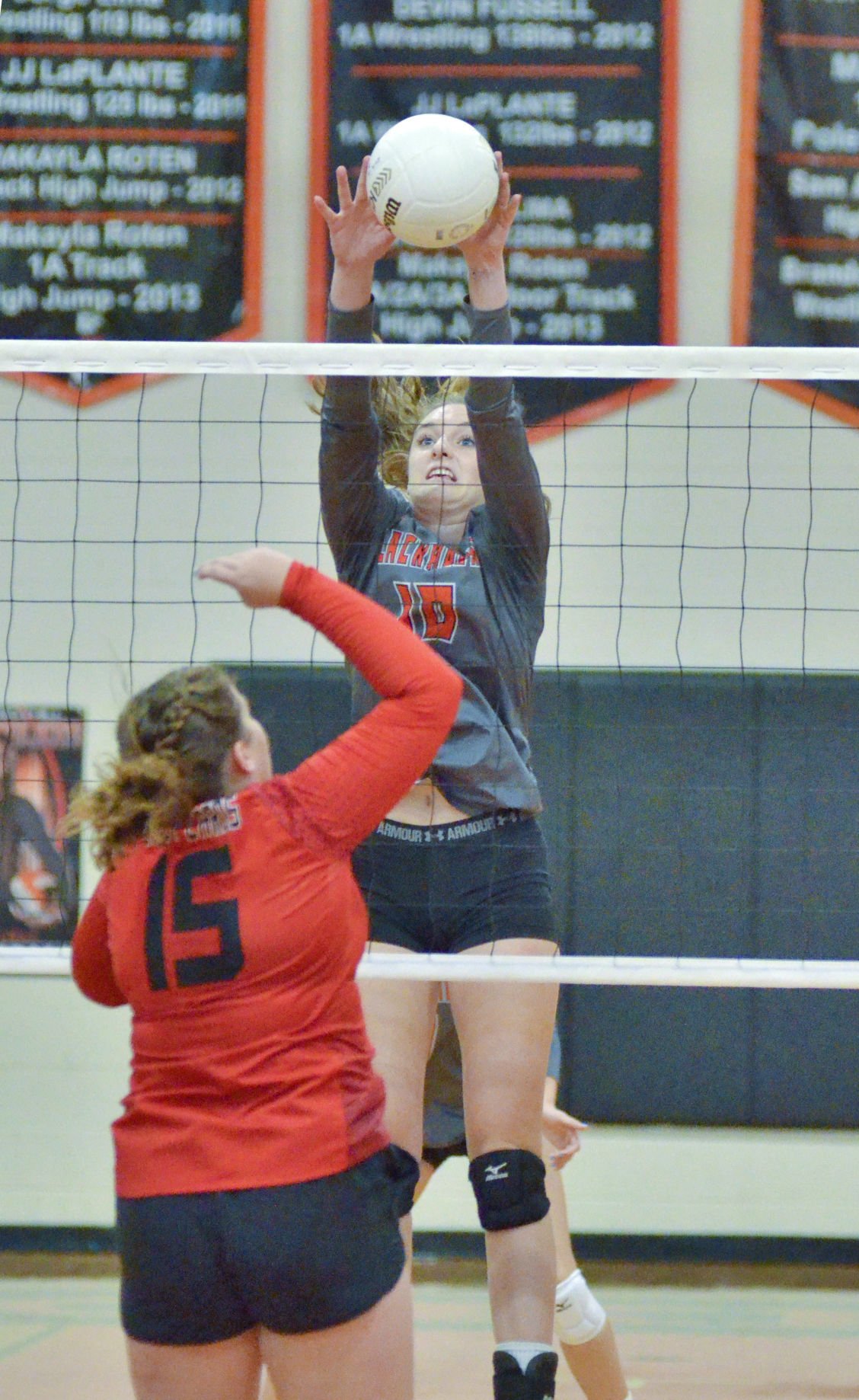 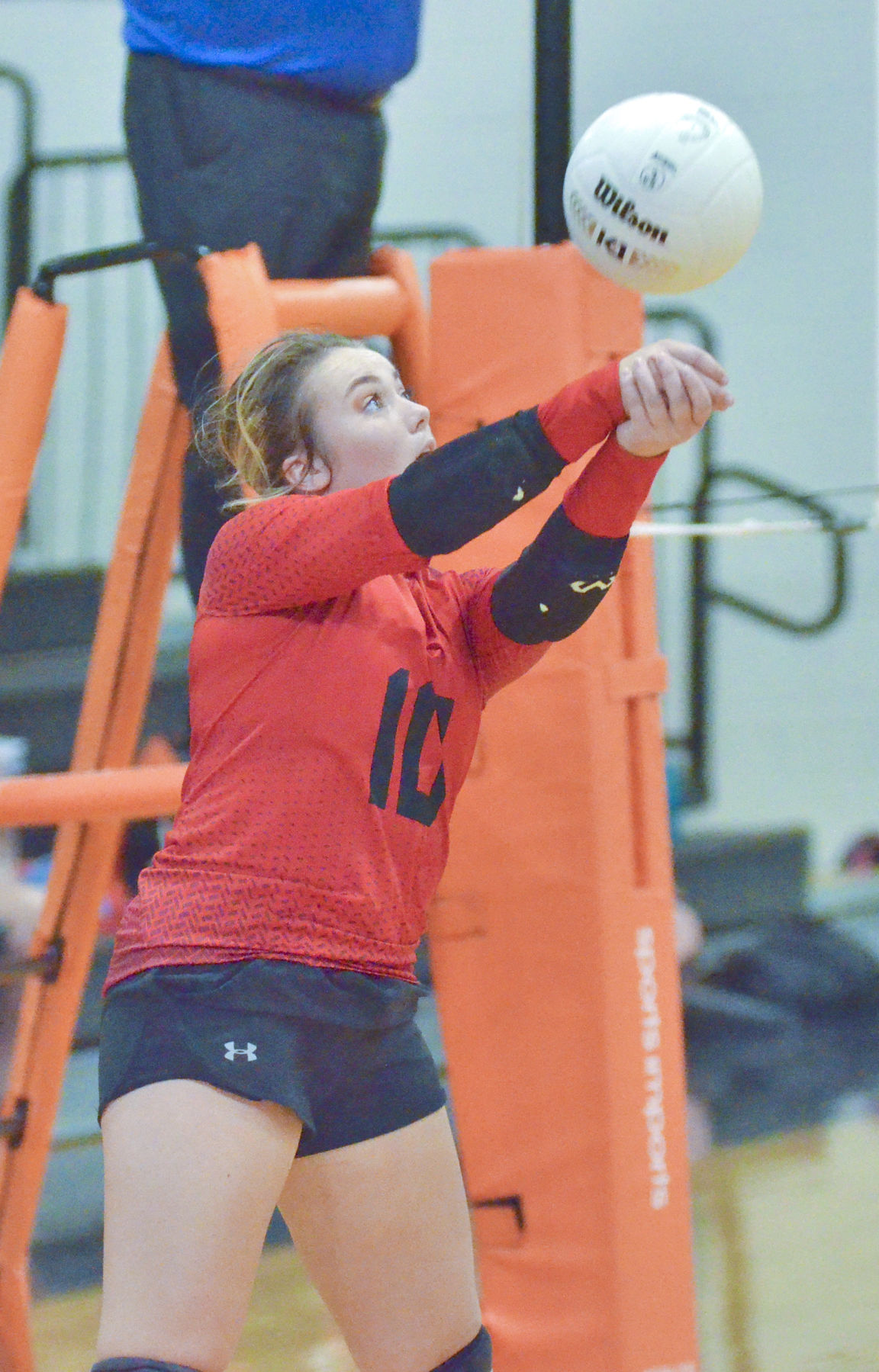 West Wilkes entertained its sister school from Ronda Thursday evening in Millers Creek and provided a clinic in frontline play against the Cardinals, sweeping East in three sets (25-7, 25-10 and 25-11) to improve to 14-0 overall and 9-0 in Mountain Valley Athletic Conference play.

“Our two ‘bigs’ in the middle (Cheyenne Clonch and Carson Ledford) are dominating players” said West Wilkes Head Coach Steve Bryan.  “When we get right-side and outside hitting (from Salem Whittington and Aaliyah Mastin among others) to go along with them,we are hard to handle.”

The Blackhawk frontline delivered 29 kills and 13 blocks as they, for the most part, controlled play at the net in each of the three sets.

Under-sized Aubrey Wallis of the Cardinals (4- 14 overall and 2-7 in conference play) valiantly provided eight kills of her own but her singular effort was no match for the bigger and more powerful West Wilkes spikers and blockers.

In the first set,West built a 12-3 lead prompting East Wilkes Head Coach Kassandra Gage to call a timeout to break the Blackhawk momentum. The maneuver proved to be ineffective as the Hawks outscored the Cardinals 13-4 to close out the set.

In the first portion of the second set, East appeared to have settled down behind the solid play of Wallis.  The Cardinals tied the score at 9-9 before West went on a 16-1 run to win the set 25-10.

During the course of this run, Ledford held serve for 13 points spoiling East’s hopes of claiming this set.

“Aubrey (Wallis) threw up some blocks and got some kills,” said Gage.  “She isn’t very big but she isn’t intimidated by anyone. We knew that they were very solid coming into this match but we are going to have to be more aggressive on the back row to complete with teams like them.”

In the final set, West jumped out to a 7-0 lead before the Cardinals battled back to close the margin to 15-10. As in the earlier sets, the Blackhawks went on a big run (10-1) to end the set and claim the match.

Clonch, the reigning MVAC Player of the Year, had a monster game with 13 kills, 10 blocks and one ace.  Mastin provided seven kills, one block and three aces.

“I am proud of our girls, they are elevating their game at the right time,” said Bryan. “I challenge them to elevate their game every time that they step on the court.  We have to do this to get ready for the playoffs.

“Our senior leadership on this team is outstanding. We play Alleghany on Tuesday and they are always tough.”

The Cardinals will face Starmount in Ronda today.

“We are looking forward to this rematch” said Gage.

Rain showers in the evening will evolve into a more steady rain overnight. Low 37F. Winds light and variable. Chance of rain 80%. Rainfall near a quarter of an inch.