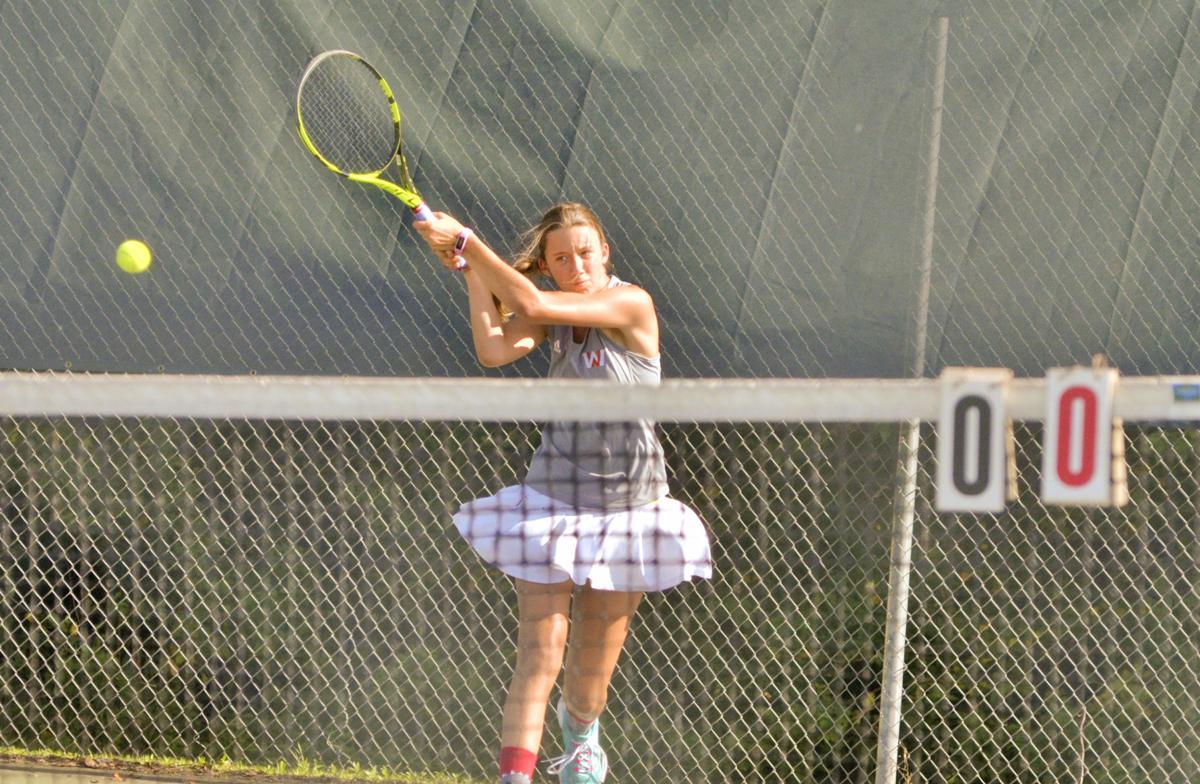 ZOEY ALBERT, seen here earlier this season, picked up wins at both No. 1 singles and No. 1 doubles in West Wilkes’ win over Elkin on Tuesday. Albert, a freshman, is currently 10-0 in matches this fall. 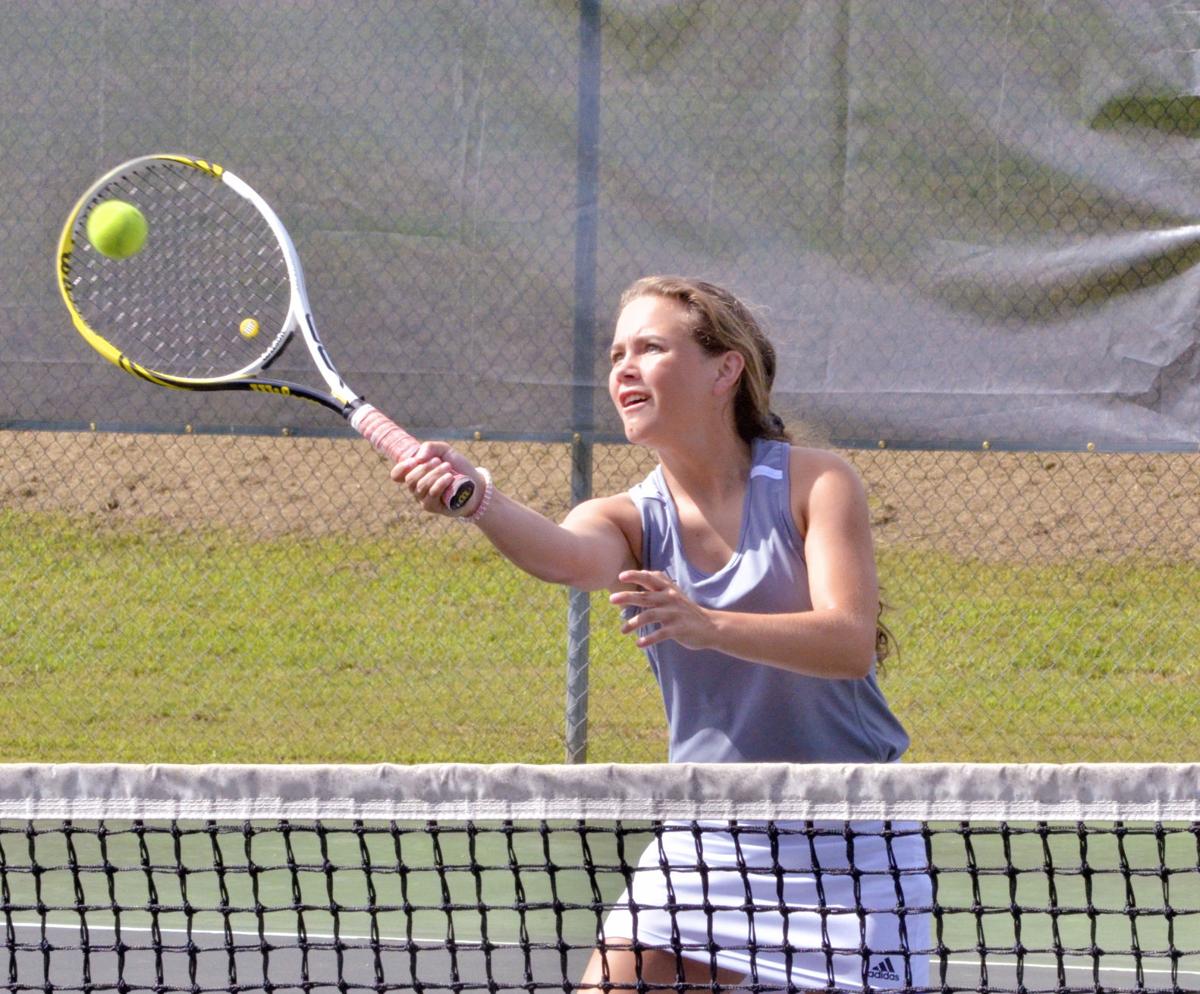 WEST WILKES’ Paige Phillips picked up a win by identical 6-0 scores during No. 6 singles action on Tuesday.

ZOEY ALBERT, seen here earlier this season, picked up wins at both No. 1 singles and No. 1 doubles in West Wilkes’ win over Elkin on Tuesday. Albert, a freshman, is currently 10-0 in matches this fall.

WEST WILKES’ Paige Phillips picked up a win by identical 6-0 scores during No. 6 singles action on Tuesday.

The West Wilkes girls tennis team is off to one of its best starts in recent memory and on Tuesday afternoon, it picked up a signature win — a 7-2 victory against longstanding Mountain Valley Athletic Conference power Elkin at the Tom Gwyn Tennis Complex.

The Blackhawks are now 4-1 overall and 4-1 in MVAC play ahead of Thursday’s match at Ashe County. That match will determine which team takes sole possession of the MVAC’s top 2A spot. The Huskies dropped a 6-3 decision on Tuesday to current MVAC leader East Wilkes.

For Head Coach Angie Eddins, Tuesday’s win shows just how far the program has come since she started coaching the team in 2016, and even before then.

“I am so very proud of the Lady Blackhawks for winning a match against the always very strong Elkin team,” said Eddins. “As far as I can find in records, West has not won a conference match against any Elkin team in at least seven years, probably longer than that. It was a good day for West.”

Strong singles play led the charge for the Blackhawks as they captured victories in four of the six singles matches.

A pair of juniors, Lizzie Church and Paige Phillips, picked up victories at No. 4 and No. 6, respectively. Church defeated Larklyn Nelson 6-3, 6-4 while Phillips swept Zoey Hawks by identical 6-0 scores.

West Wilkes’ Zoey Albert and Elizabeth Minton picked up key singles victories at No. 1 and No. 2, respectively.

Minton, one of three seniors to start on Tuesday, started off the match against Elkin’s Stephanie Kelly with a hard-fought 7-5 victory and followed that up with a 6-3 win.

Albert, a freshman who has yet to drop a match in either singles or doubles competition this fall, defeated the Buckin’ Elks’ Emma Henstock 6-0, 6-1.

Albert and Minton then teamed up in doubles play to defeat Henstock and Kelly 8-3.

“Elizabeth’s game has matured and she’s developed to be one of our strongest this year,” said Eddins. “Zoey’s new to the team this year and she is highly competitive with skills to match — she is a rising star.”

Elkin (3-2, 3-1) kept it close and trailed 4-2 at the conclusion of singles play behind Brittany Collins’ win against West’s Cassidy Miller at No. 3 and Julie Cortez’s win at No. 5 versus Davis Ritenour.

But the Blackhawks put the match to bed, thanks to a sweep of doubles play.

Church teamed with Rylea Church at No. 2 doubles to best Collins and Cortez 8-6. Kendall Stanley and Harleigh Walsh defeated Nelson and Hawks in No. 3 doubles 8-1.

Following Thursday’s tilt at Ashe, West Wilkes returns to the court on Monday with a nonconference match at Watauga. The next day, they’ll close out the first half of MVAC play with a home match against North Wilkes (1-4, 1-3).

Rain and thunderstorms. Low around 65F. Winds light and variable. Chance of rain 80%.

Thunderstorms in the evening, then variable clouds overnight with still a chance of showers. Low around 60F. Winds light and variable. Chance of rain 80%.