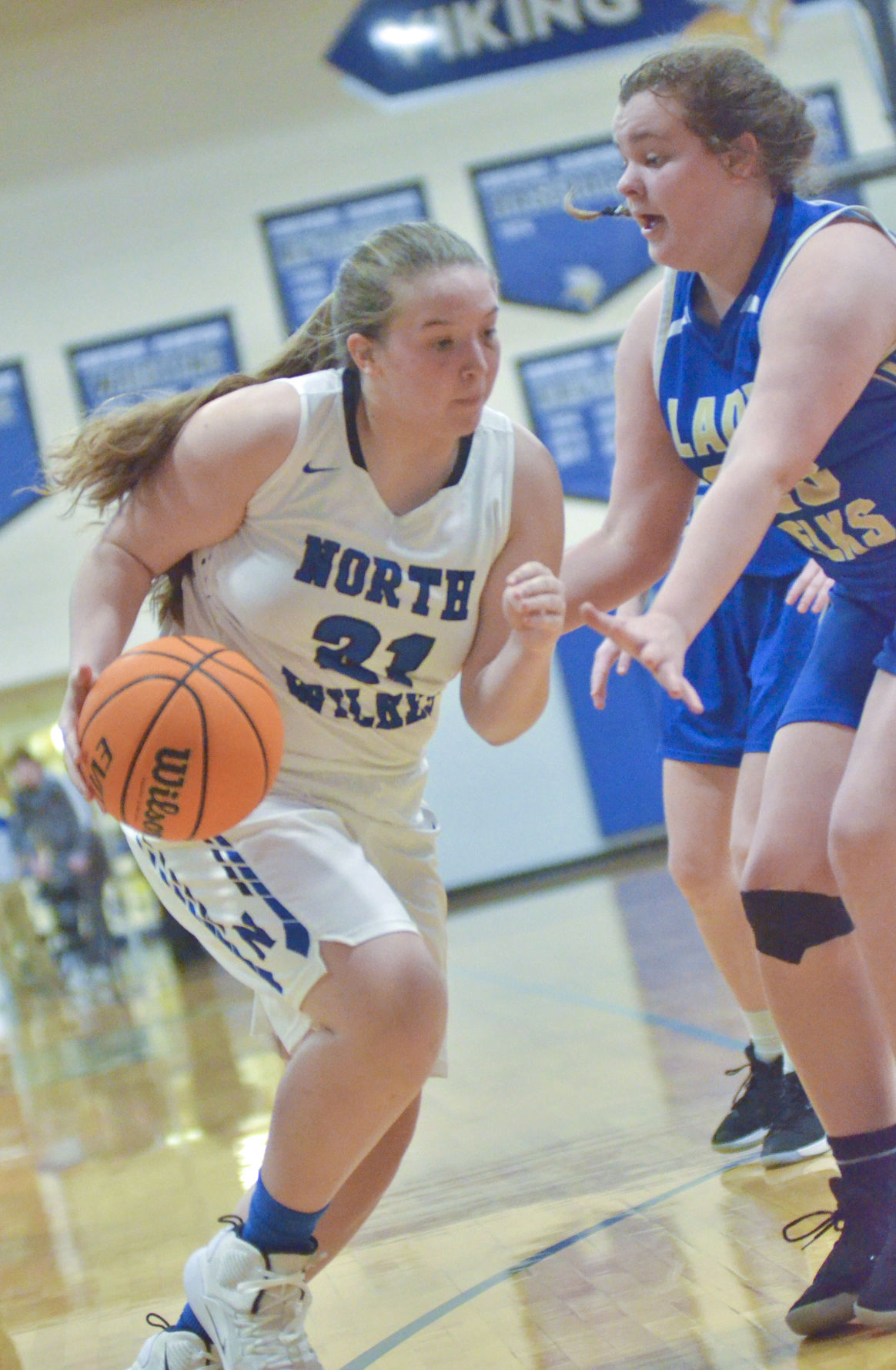 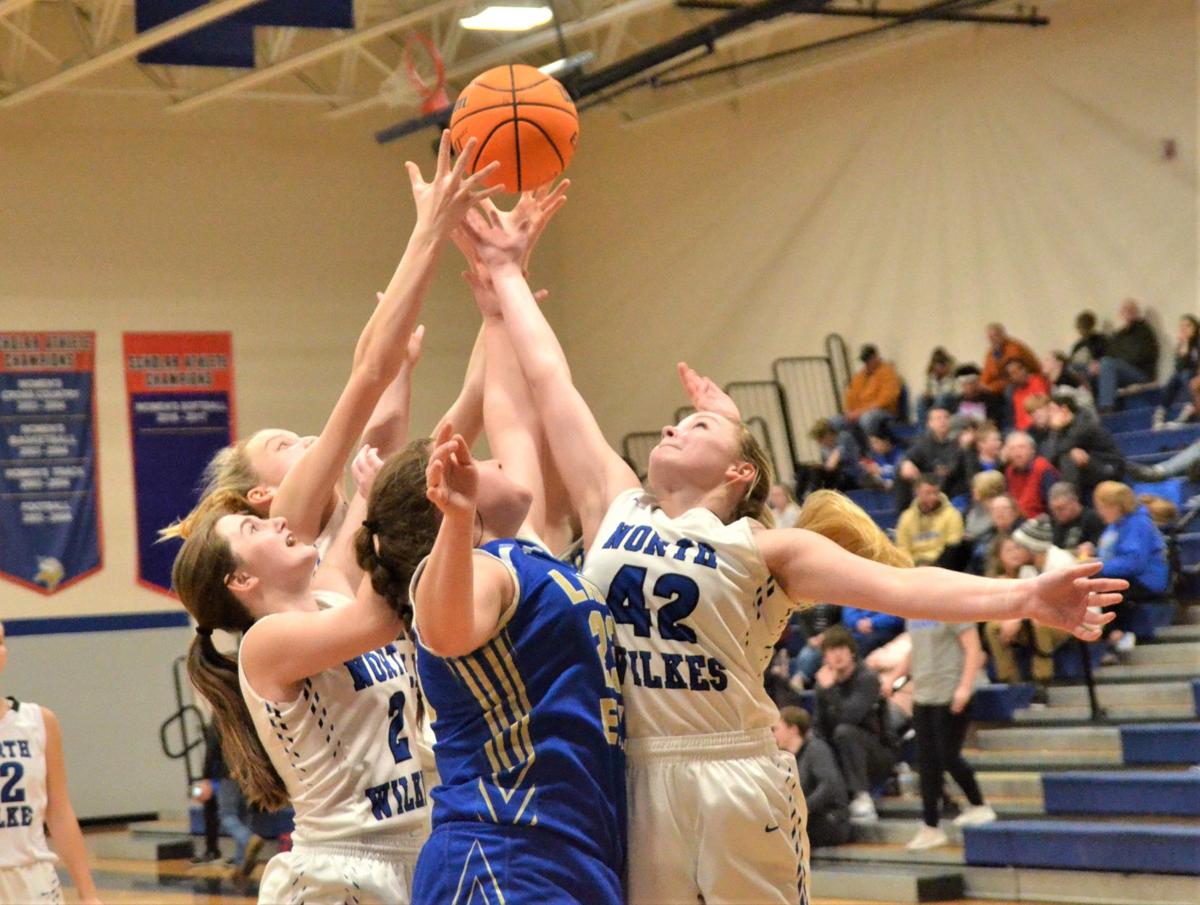 McKenzie Johnson was one of four Vikings to score in double figures in the win against Elkin.

But injuries took their toll as the league slate started and the Vikings followed their hot start with a stretch of eight losses in 12 games.

The injured players are slowly making their way back, however, and if Friday’s 60-42 beat down of Elkin is any indication the Vikings may be getting their early season rhythm back with three regular season games — and one conference tournament — left to play.

North Wilkes led from start to finish, building an early 18-3 lead after the first eight minutes. After that run, the closest the Elks got was 30-20 early in the third quarter. That moment was met, however, by a 13-2 run from the home team that ended all doubt, as the Vikings improved to 11-10 and 3-8 in league play.

“Tonight felt good,” smiled North Wilkes Head Coach Steven Phillips. “It was beautiful. We haven’t had a game like this in a long time, so it’s a great feeling.

“The team played very unselfishly. And we hounded them defensively. We had active hands, we got on the boards, and our perimeter defenders did a good job pressuring their guards and taking them out of their normal offensive rhythm.”

Johnson and Martin both missed extended time recently due to injuries, and both made their presence felt Friday.

“Every game since they’ve been back they’ve been stronger, and more confident,” said Phillips. “The big thing is they both feed off each other. They are both highly competitive wings, and they help each other play at a high level on both ends of the court.”

The absence of Johnson and Martin (another key cog in the early Vikings’ attack, Madison Byrd, remains out with an injury) opened up playing opportunities for younger players like Brown, who started the season on the JV squad, and sophomore point guard Haili Shumate. And both players remained integral to North’s success Friday.

“Both of those kids are getting better every day,” said Phillips. “They have both proven they belong.

“Now, that doesn’t mean they don’t have moments where we see their youth and inexperience,” smiled Phillips. “But every time they step on the floor we see how they have improved, and how they are helping us in ball games.”

Cornelius led a solid night of outside shooting for the Vikings. North connected on eight three-pointers Friday, paced by three from behind the arc by Cornelius.

“We challenged Makayla at halftime. In the first half, we thought she had passed up a few good looks. So we told her to take those shots when she had them,” said Phillips. “And she accepted the challenge (all three of Cornelius’s triples came in the third). She’s such a great shooter, and the team did a nice job all night unselfishly moving the ball and giving all our kids good looks at the basket.”

Audrey Jennings led all scorers Friday with 26 points in the losing effort, as her Elks dropped to 3-16 overall and 1-10 in the MVAC.

“I have to praise number 11,” Phillips said of Jennings. “We were all over her tonight, but she still went out and got hers. She’s a really good player. It’s hard to contain her on any night.”

North’s next contest will be tougher, as the Vikings travel to Millers Creek tonight to face West Wilkes. The Elks, meanwhile, will try and get back in the in column with a trip to West Jefferson and Ashe County.

North Wilkes was able to hold off Elkin to in the afternoon’s JV contest by a score of 21-17. North held the Elks to only two first-half points, and enjoyed an 11-2 lead at the break. A comeback effort fueled by Elkin’s Madison Mauldin, who scored all nine of her points in the second half, fell just short. The Vikings were led to victory by the one-two scoring punch of Brook Settle (nine points) and Beth Settle (six points).

A few clouds from time to time. Low 34F. Winds light and variable.