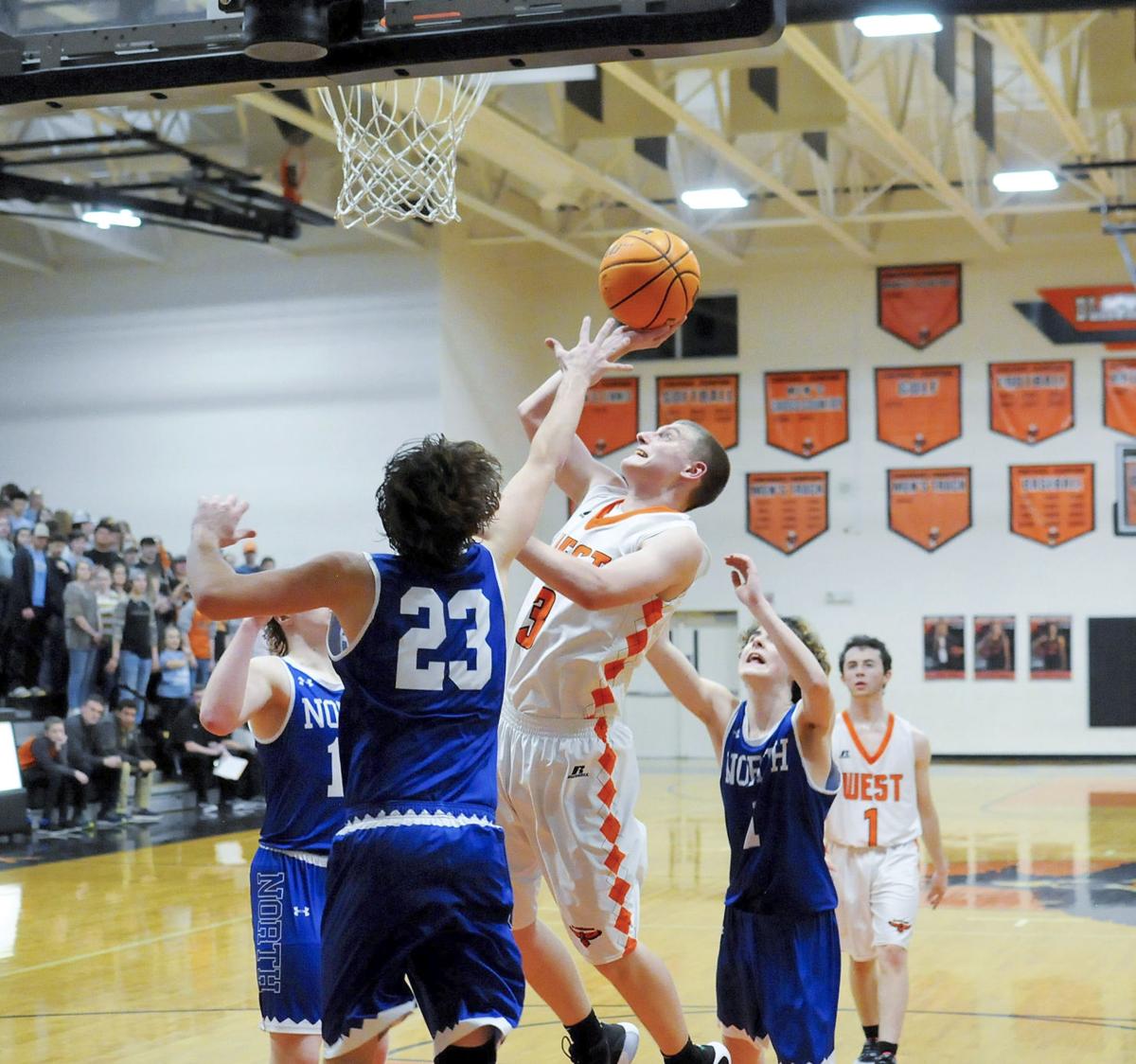 Jacob Brown puts back a shot against North Wilkes' Trenton Sidden in the first half of West Wilkes' win on Tuesday night.

West Wilkes needed a win after a three-game losing streak that had dropped the Blackhawks from first to third in the Mountain Valley Athletic Conference standings.

So the ’Hawks responded with what Coach Scottie Greene called the “first game we have put four quarters together all year long” in a convincing 82-60 victory over county rival North Wilkes Tuesday in Millers Creek.

“There’s been games where we’ve played two really good quarters, and games where we’ve had three,” said Greene after the win that improved the Blackhawks to 9-3 in league play and 13-7 overall. “But before tonight we hadn’t done it for an entire game. Tonight, though, we were aggressive offensively, shot the ball well, got to the free throw line, played very good defense, and rebounded the ball well. We played a complete basketball game.”

The offensive stats backed up Greene’s comments. The Blackhawks got to the free throw line 32 times and converted 23 of them. By contrast, North Wilkes only got to the charity stripe 10 times (though the Vikings were perfect Tuesday from the line).

The Blackhawks scored the game’s first point — a free throw from Jackson Stinson after an aggressive drive to the hoop — and never trailed. Spurred by five total points from Stinson, West Wilkes enjoyed a 15-8 lead after one period of play, and that lead only grew through halftime.

The bench played well, too. Eleven of the 12 players on Greene’s roster scored at least a basket and there was no let up when Greene went to his reserves in the first half.

“Nate Hall was a real spark off the bench,” said Greene. “He hit a couple of big shots, but he also did a great job on the offensive boards in the first half.”

Despite playing limited minutes as the lead grew, point guard Jacob Brown led the Blackhawks with 20 points and Stinson chipped in nine.

North Wilkes fell to 6-16 and 2-10 in the MVAC with the loss. Matthew Holloway tallied 20 points in the defeat and Trent Huffman added 11 off the bench.

The Vikings sank 10 3-pointers on the evening (with Holloway leading the way with four), but the early deficit was simply much to overcome in the raucous atmosphere of Millers Creek Tuesday.

“I thought our guys competed for the most part, but West Wilkes played very well and made big time shots when they needed to,” said North Wilkes Head Coach Logan Call. “Their pressure got to us, and we didn’t keep our composure at times —that’s something we definitely have to fix in practice going forward.

“But you have to give Coach Greene a lot of credit,” added Call. “His team really executes offensively and plays with great energy defensively and on the glass.”

Greene returned the compliment to the Vikings.

“That’s going to be a really good team. Coach Call is doing a good job, and they are going to be awfully tough to play in a year or so,” said Greene.

West Wilkes next faces Alleghany at home tonight. The Blackhawks beat the Trojans 38-35 earlier this season, but Alleghany has played everyone tough this season.

“We just have to make sure we take care of us,” said Greene in response to how the ’Hawks will prepare for tonight’s challenge. “We’ll be fine if we continue to take care of the things within our control. That starts in practice. We’re going to do the things we need to do in practice until we get them right. And our coaches have made sure we’re doing what we need to, as well. The credit for whatever success we’ve had this season goes to the job our coaches do every day.”

North, meanwhile, faces Starmount on the road in Boonville. The Rams fell to Wilkes Central 64-57 in overtime Tuesday.

In the afternoon’s JV contest the Blackhawks rallied from a halftime deficit to surge past the Vikings 62-41. A huge third quarter was the difference, as West outscored North 24-4. West Wilkes was also solid from long distance, with Carson Stanley, Carson Edmiston, Logan Wayne and Aaron Hartley combining for 11 triples. Stanley led all scorers with 19 points and Reece Cleary paced the Vikings with 13 points.