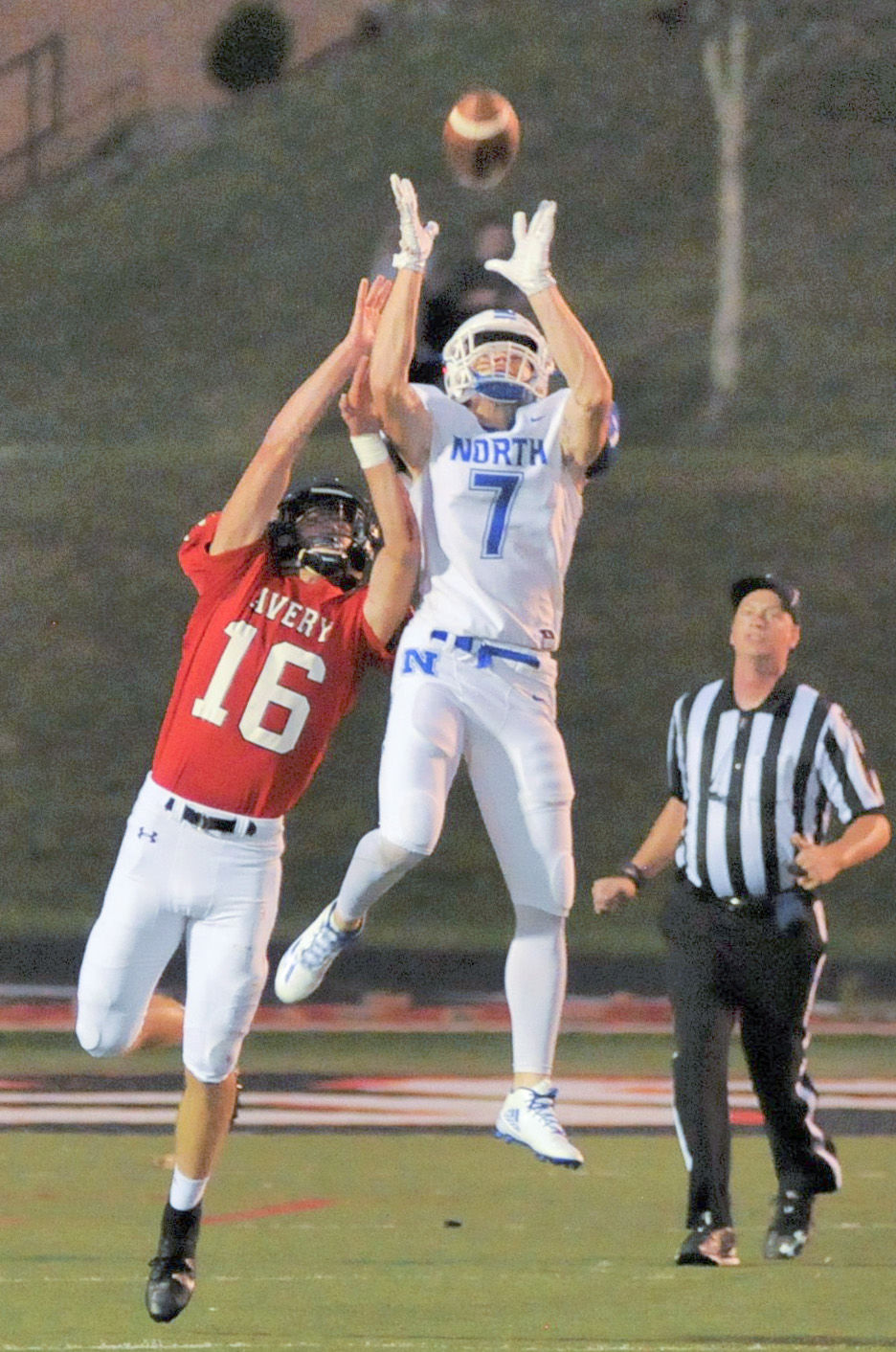 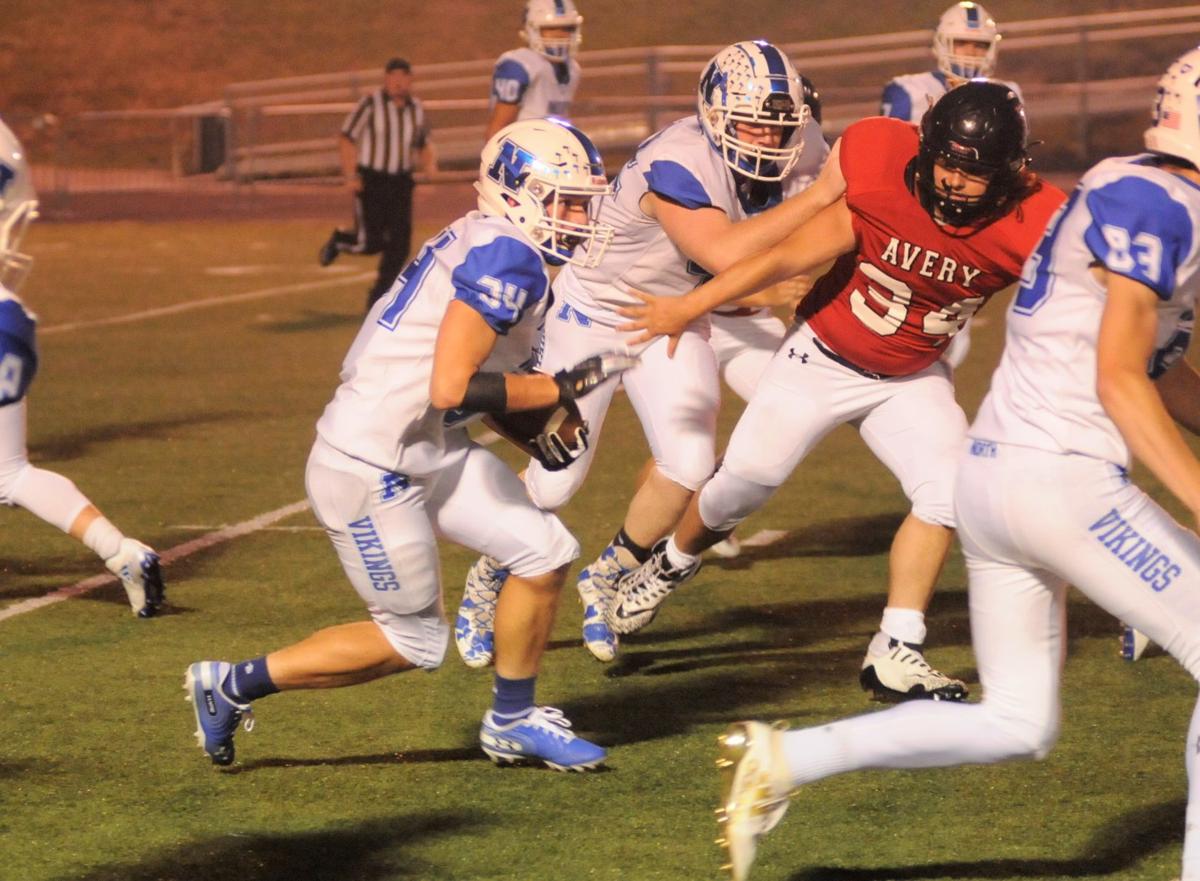 One storm lit up the nighttime sky around MacDonald Stadium with flashes of lightning and peals of distant thunder, and prematurely ended the Vikings’ evening before the start of the third quarter. The other storm wore red and black.

Propelled by a powerful aerial attack, the Avery County Vikings tallied a game’s worth of work in one half of football and stormed past North Wilkes 42-7.

As the two teams came out of the halftime locker room to start the third, the storm not clothed in Avery’s school colors (and that had threatened the area all afternoon) seemed to inch closer to the football field in Newland, and officials told players and fans to seek shelter.

Right before 9:30 p.m., with conditions still holding steady but forecasts grim, the teams decided to head to their respective homes without playing the second half.

But by that time the game was well in Avery’s hands, thanks to a stellar effort from the passing game.

“I think they knew we had been weak against the pass,” said North Wilkes Head Coach Monty Chipman, whose team suffered its first defeat of the fall to drop to 3-1. “And it didn’t really matter what look we gave them. They did a great job of stretching the field with their outside receivers and testing our corners.”

The test started early. On the third play from scrimmage, Avery quarterback Troy Hoilman found Chad Giarrusso streaking down the left sideline. Hoilman held the ball until Giarrusso was free and the junior signal caller took a hit from North’s Cole Edwards on the throw.

But the ball was perfect, and Giarrusso was past his man on the reception. The rest was a stroll for the freshman wide out and instantly the home Vikings were up 7-0.

“Once we got down, it took us out of our game plan a little,” said Chipman. “We’ve had success this season running the football and controlling the clock. We felt we had to abandon that too early tonight.”

The first North possession lasted only six plays and gained only 16 yards. And after the ensuing punt, Hoilman and his mates went back to work to put the visitors in an even deeper hole.

North Wilkes didn’t help its case with a pass interference penalty to start Avery’s second drive. And after North struggled to get 11 men on the field two plays later, Hoilman found a seam on a keeper for a 17-yard gain.

But Hoilman was much better with his arm. And six plays later he found senior receiver Jesse Jones open at the front right corner of the end zone for the 14-0 advantage.

The home Vikings would tack on one more touchdown (Hoilman to Jones, 13 yards on a slant early in the second quarter) before the visiting Vikings could respond.

The subsequent North Wilkes possession was easily their best offensive effort of the evening. Dylan Church started the drive with a 13-yard scamper — his best of the night — for the instant first down. Church and Ben Winters combined for 14 more yards before Chipman called for an end-around to Adam Winebarger on first-and-ten from the North 47.

Winebarger was quick around the corner and exploded down the sideline. He had help — North’s Trenton Church obliterated a defender in the open field to spring Winebarger well past the line of scrimmage — and Winebarger galloped 53 yards for the touchdown.

Any momentum gained by the touchdown was short-lived, however. Avery County answered in five plays, capped by a touchdown throw from Hoilman to Giarrusso. The big play on the drive was a 31-yard bomb to Jonas Bowman, after Hoilman had rolled left to evade North’s pressure.

Problems in the quarter continued to mount for North Wilkes. The Vikings’ next drive was a three-and-out, and despite holding the home team to a punt on Avery’s subsequent possession disaster struck the visitors in large part thanks to a special play from the Avery special teams.

Punter Jones kicked a 38-yard beauty that was downed deep in North territory, at the 2. Dylan Church tried to give North Wilkes some breathing room, but was instead swallowed up by a hungry Avery front. And on third down a bobbled snap was collected by Avery’s Lucas Andrews in the end zone for the 35-7 score.

Another Hoilman score to Giarrusso closed out the half with under two minutes to play. Hoilman finished the half with 237 yards through the air, with Giarrusso (90 yards) his primary target.

Church finished with a decent night, gaining 75 yards on 15 carries. But the passing game stalled, as North Wilkes was unable to make a single reception.

Avery County improved to 3-1 with the win. Next is a tilt with Draughn this week in Valdese.

North Wilkes enjoys a bye week before the start of the Mountain Valley Athletic Conference on Sept. 27 in Hays against East Wilkes.

“The important thing right now is that we get out of the bye week with everyone rested and healthy,” said Chipman. “We’re disappointed by how tonight turned out, but if you had asked me earlier this season if I would have been happy with a 3-1 record after the nonconference schedule, I would’ve said yes, no question about it. I think the teams we’ve played have shown us what we need to work on heading into the East game, and now we’ll work on that. We have a good football team, and I think we’ll be ready for East.”

Note: North Wilkes’ JV team improved to 2-1 heading into its open week with a 42-18 against Avery County in Hays on Thursday night.

Scattered thunderstorms in the evening, mainly cloudy late with a few showers. Low near 65F. Winds light and variable. Chance of rain 50%.

A few clouds from time to time. Low 64F. Winds light and variable.