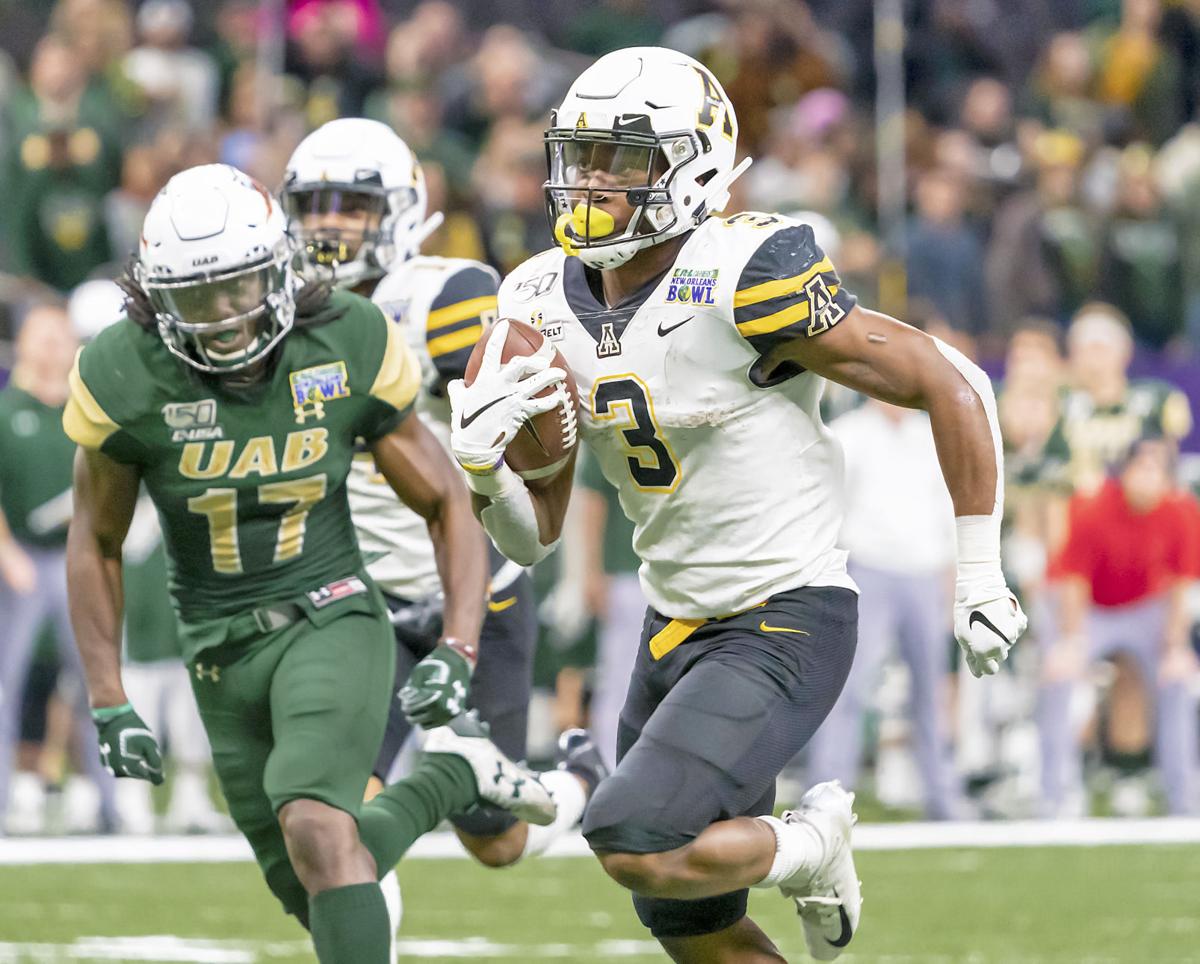 DARRYNTON EVANS, seen here rushing for a touchdown during Appalachian State’s win in the R+L Carriers New Orleans Bowl, was taken by the Tennessee Titans in the third round of the 2020 NFL Draft on Friday night. 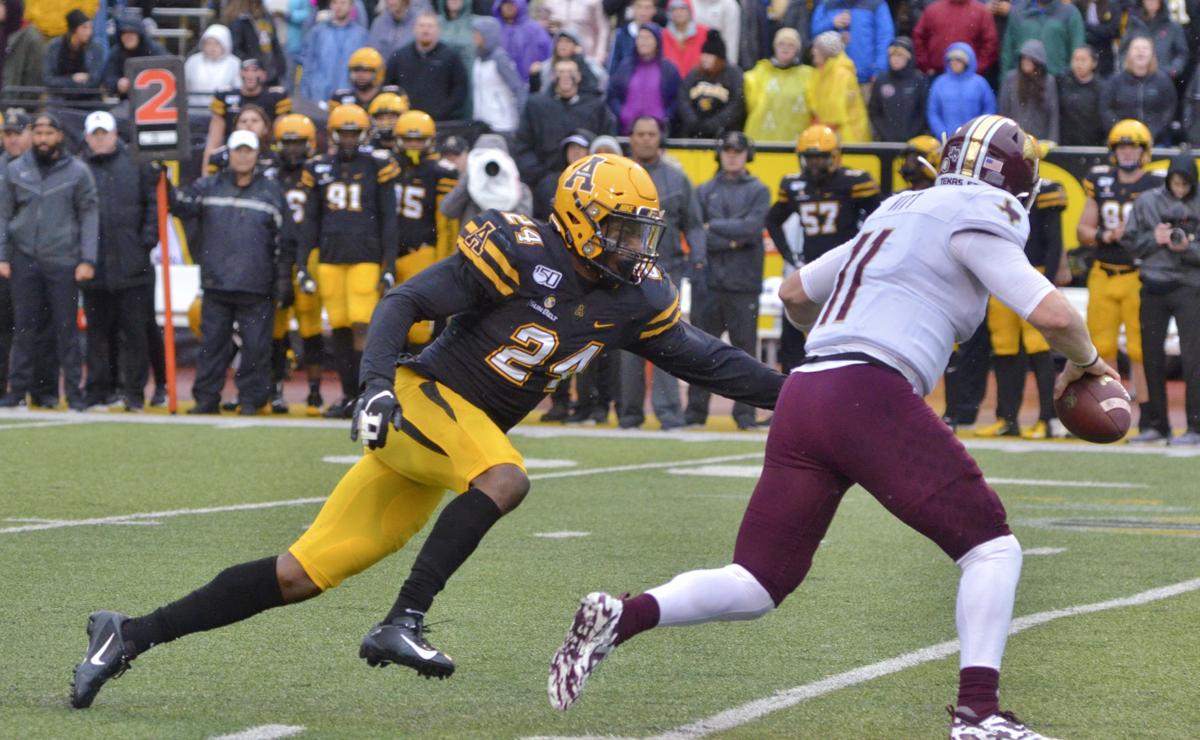 AKEEM DAVIS-GAITHER, who was drafted in the 4th round, pursues Texas State quarterback Tyler Vitt for Appalachian State last season.

DARRYNTON EVANS, seen here rushing for a touchdown during Appalachian State’s win in the R+L Carriers New Orleans Bowl, was taken by the Tennessee Titans in the third round of the 2020 NFL Draft on Friday night.

AKEEM DAVIS-GAITHER, who was drafted in the 4th round, pursues Texas State quarterback Tyler Vitt for Appalachian State last season.

App State made history in the NFL Draft on Friday, as running back Darrynton Evans went 93rd overall as a third-round pick of the Tennessee Titans.

The Cincinnati Bengals reopened the NFL Draft with a bang Saturday, using the first pick of the fourth round to select hard-hitting App State linebacker Akeem Davis-Gaither.

With Evans’ selection, it’s the highest pick of a Sun Belt running back in the history of the conference, as three other drafted backs were sixth-round selections. In the last 25 years, only two other running backs from North Carolina colleges have been drafted higher than Evans— East Carolina’s Chris Johnson (24th in 2008) and North Carolina’s Giovanni Bernard (37th in 2013).

Moving forward from a 13-1 season in which it finished with a top-20 ranking in both national polls, App State was the first Group of Five program to have two players picked in the 2020 NFL Draft.

App State is also the first Sun Belt program ever with two players selected that early in an NFL Draft. Previously, Louisiana had a second player taken 110th in 2012 and 125th in 2003.

Evans, an early draft entry who was App State’s primary running back for just 23 games, posted career totals of 2,884 rushing yards and no fumbles on 482 carries (6.0 yards per attempt). Also a skilled returner and receiver, he had 4,642 all-purpose yards and 34 touchdowns in three college seasons.

In addition to being named the Sun Belt Conference’s Offensive Player of the Year in 2019 and winning the Sun Belt rushing title in each of his final seasons, he collected three pieces of hardware in four postseason chances as a two-time MVP of the Sun Belt championship game and the MVP of the 2019 R+L Carriers New Orleans Bowl.

Evans rushed for 1,480 yards, totaled 2,064 all-purpose yards and ranked No. 3 nationally by scoring 24 touchdowns (18 rushing) in 2019. Against Charlotte, he became the first FBS player this millennium to post at least 200 rushing yards (234), score three rushing touchdowns and have a kickoff return for a touchdown in the same game.

As someone who has completed the 40-yard dash in less than 4.40 seconds and ranked second at the NFL Scouting Combine with a time of 4.41, Evans used his track speed to amass 11 runs of at least 50 yards over his final two seasons and record three kickoff returns of at least 94 yards during his App State career.

In program history, the only App State offensive players to be picked higher than Evans are receiver Brian Quick (No. 33 in 2012), receiver Dexter Jackson (No. 58 in 2008) and quarterback-turned-receiver Armanti Edwards (No. 89 in 2010).

Davis-Gaither went 107th overall to the Bengals, whose coaches were in charge of the South team for which he excelled as a captain during the Reese’s Senior Bowl in late January. It’s the second-highest pick of a Sun Belt Conference linebacker in the history of the league, after only Arkansas State’s Demario Davis (No. 77 in 2012).

“I always carry that chip on my shoulder, regardless of if I would have went in the second round, because I know there are people out there that are doubting me,” Davis-Gaither said on a video call with Bengals reporters. “I just want to prove them wrong. (At App State), that’s our motto.”

Shown by ESPN celebrating in North Carolina with family members not far from his hometown of Thomasville, Davis-Gaither was taken with the first pick Saturday, just minutes after a full day of coverage began.

In his two seasons as a full-time starter for App State, Davis-Gaither accumulated 209 tackles, 24.5 tackles for loss and 15 pass breakups (tied for No. 3 nationally among non-DBs) while leading defenses that ranked No. 4 and No. 21 in fewest points allowed per game.

After making a team-high 105 tackles in 2018, he was named the Sun Belt Conference’s Defensive Player of the Year and a fourth-team All-American (Phil Steele) in 2019 thanks to his 104 tackles, 14.5 tackles for loss, 5.0 sacks and eight PBUs.

Davis-Gaither was the fourth-highest pick ever for an App State defensive player. Dino Hackett went 35th to Kansas City in 1986, Dallas selected Dexter Coakley with the 65th pick in 1997 and Buffalo used the 87th pick on Matt Stevens in 1996.