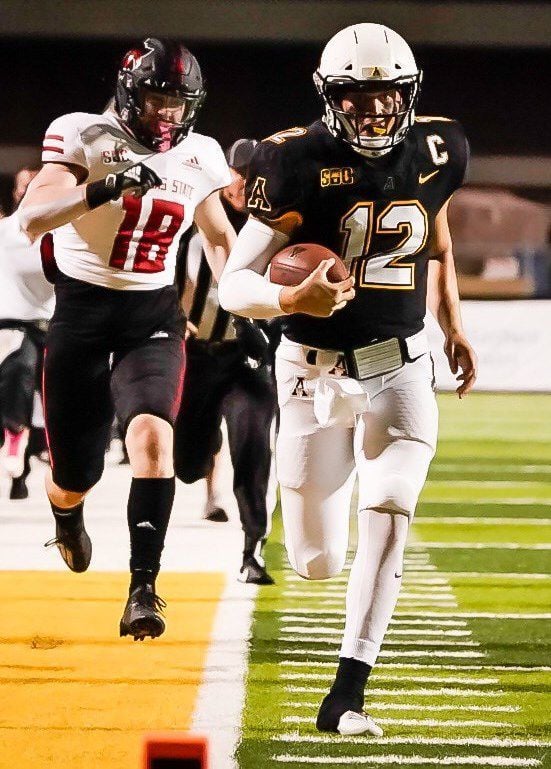 App State’s Zac Thomas rushes for a 60-yard touchdown in his team’s 45-17 win over Arkansas State on Thursday. Thomas tied a career high with four passing touchdowns and was later named the Sun Belt Conference’s co-offensive player of the week. 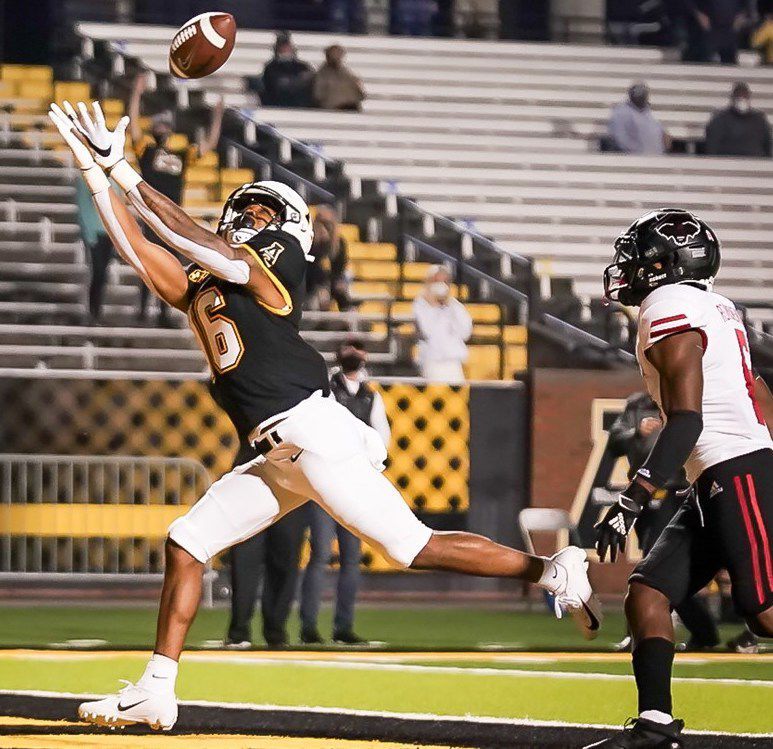 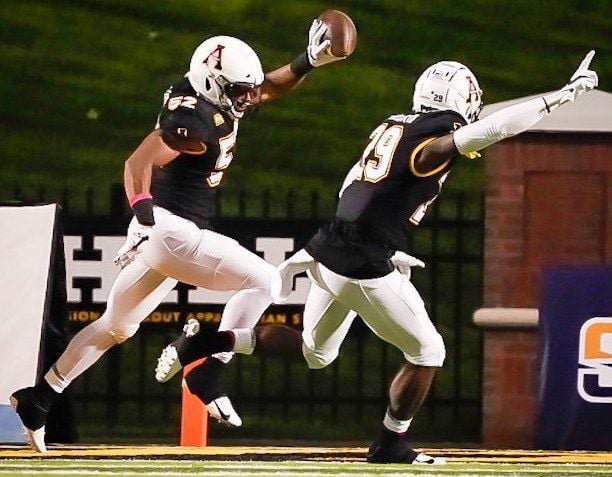 App State’s Zac Thomas rushes for a 60-yard touchdown in his team’s 45-17 win over Arkansas State on Thursday. Thomas tied a career high with four passing touchdowns and was later named the Sun Belt Conference’s co-offensive player of the week.

Zac Thomas delivered a 60-yard touchdown run in addition to tying his career high of four touchdown passes, Daetrich Harrington broke loose on a long touchdown while rushing for 137 yards and the defense put up a dominant first-half showing as the Mountaineers rolled to a 45-17 victory against Arkansas State at The Rock on Thursday night.

Playing for the first time in 26 days, after the first two scheduled Sun Belt Conference games were postponed until December, App State (3-1, 1-0) began pursuit of a fifth straight league title by building a 31-7 halftime lead against the high-scoring, pass-happy Red Wolves (3-3, 2-2) in a nationally televised game on ESPN.

“Our guys like to compete, and that was the message today — go compete to see where we are as a program,” head coach Shawn Clark said. “Our guys did that. We did a great job on defense, and we came out and started fast on offense.”

With 2,100 fans in attendance based on 7% capacity guidelines in Kidd Brewer Stadium, there was plenty to cheer about.

For the second straight meeting, the Mountaineers held Arkansas State to less than 20 points, something that’s happened only two other times to the Red Wolves in the last three seasons — against Alabama and Georgia.

D’Marco Jackson made two interceptions in the end zone to end a pair of scoring threats, Tristan Walliser forced an errant pitch while disrupting an unsuccessful fake punt and App State’s six sacks came from Demetrius Taylor (two), Tim Frizzell, Caleb Spurlin, Trey Cobb (part of his 3.5 tackles for loss) and a combo effort from Shaun Jolly and George Blackstock.

Offensively, Thomas rushed for a career-high 82 yards on seven attempts and completed 16 of 23 passes for 216 yards, with two of his TD passes finding first-time starter Christian Wells. On Monday, Thomas was named the Sun Belt’s co-offensive player of the week.

“Our players embody what a Mountaineer is, and they showed resilience tonight,” Clark said. “I can’t stress how proud I am of our players, our coaches and our program.”

Arkansas State used a field goal and 55-yard touchdown run to trail just 31-17 late in the third quarter, and a third-and-14 scenario put the Red Wolves in position to get the ball back.

Thomas sprinted up the middle for a big gain, made a hard right cut near the Arkansas State 35, maneuvered around a Malik Williams block that occupied two defenders and stayed in bounds along the sideline before making a Superman-style dive into the front-right pylon.

“That linebacker (in the middle) I knew had the running back, and as soon as I saw that, I knew it was about to be something good, so I sent (the back) in motion,” Thomas said. “It just parted like the Red Sea right there, and a heck of a job out by Malik out wide to make two key blocks, and up front, they all did their jobs.”

Jackson’s 44-yard return of an end-zone interception set up the Mountaineers’ final touchdown, a 20-yard pass to Wells with 8:22 remaining.

App State didn’t punt in a first half that included a 46-yard touchdown pass down the middle of the field to a streaking Wells on the Mountaineers’ first possession, a tie-breaking touchdown run of 55 yards from Harrington on their next series and a 5-yard pass early in the second quarter for tight end Mike Evans’ first career touchdown. Thomas’ keeper for 23 yards on a fourth-and-4 run from the Arkansas State 45 extended that drive.

Forcing mistakes and capitalizing on others from the Red Wolves, App State increased its lead before halftime thanks to Chandler Staton’s 39-yard field goal and Williams’ 16-yard touchdown reception. Arkansas State arrived in Boone averaging 38.2 points, helped by totals of 50 and 59 in its last two games, but the Mountaineers’ defense ended the first half Thursday with no third-down conversions allowed in seven attempts and four forced punts — one shy of the Red Wolves’ season high for a game. They were limited to -4 rushing yards in the half, and aside from two long passes that netted 81 yards for star receiver Jonathan Adams, Arkansas State’s other 18 pass attempts before the break produced 102 yards.

“It was a lot of preparation,” said Jackson, who had the first two interceptions of his career. “We had guys going late night, throughout the week, coming over about 8 or 9 (p.m.) and doing film studies, looking at tendencies and what they liked to do on certain downs. A lot of preparation went into it.”

Arkansas State trailed 21-7 when it forced a turnover and moved within a single yard of cutting its deficit in half.

The Mountaineers responded to that first-and-goal situation from the 1 by forcing a loss of 1 on a run and pushing the Red Wolves back 5 more yards on Frizzell’s stop of quarterback Logan Bonner. Pressure from Taylor and Frizzell led to a third-down incompletion, and Arkansas State missed the 24-yard field goal wide left.

The Red Wolves regained possession when a long run turned into a lost fumble, but a three-and-out series preceded Walliser ruining the fake-punt plan for a reverse pitch.

Arkansas State didn’t move into positive territory for rushing yards as a team until its long touchdown late in the third quarter, and the Red Wolves finished 4 of 16 on third-down conversions.

App State will play the 1,000th football game in program history when it hits the road Saturday to face the University of Louisiana at Monroe.