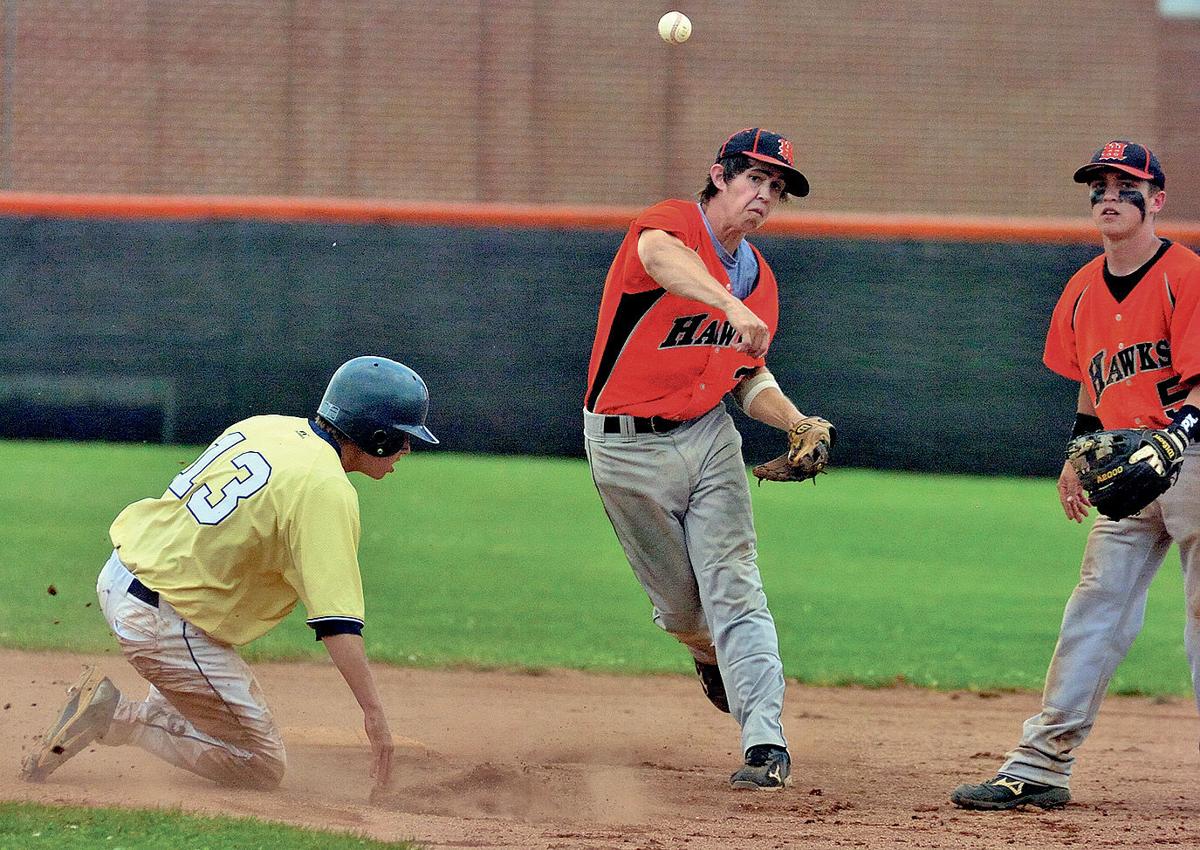 AFTER TAKING A THROW from second baseman Ethan Church (right), shortstop Tyler Stotler throws to first around a sliding Matt Rembielak on an attempted double play in the second inning of Game 3 of the 2010 Western Region finals in Millers Creek. Rembielak was the winning pitcher in relief for Bishop McGuinness in Game 2—the first game of a Saturday doubleheader—but took the loss in Game 3. 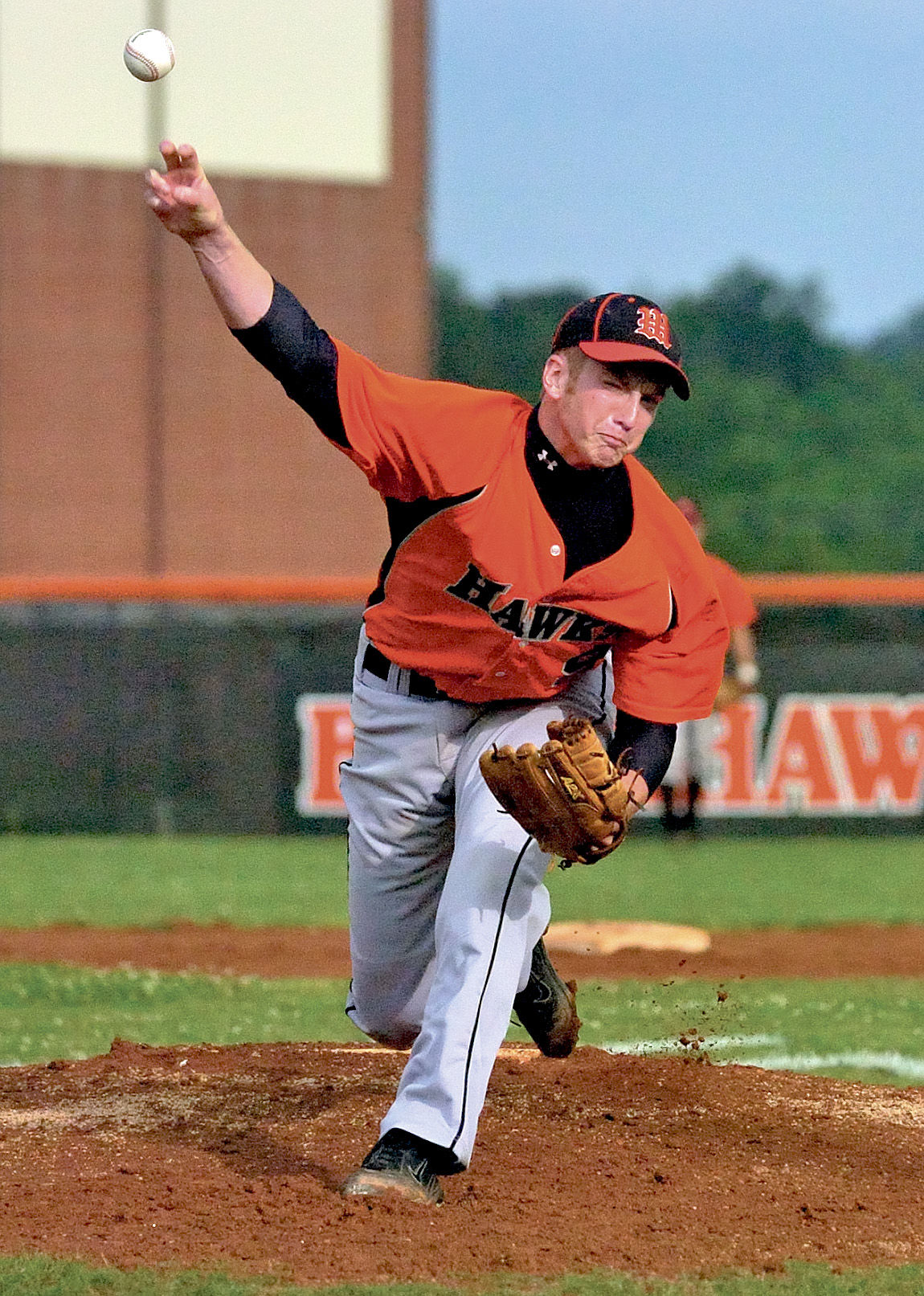 Senior righthander Scott Gambill twice struck out a career-high 16 batters in a game during West Wilkes’ 2010 run to the 1A state championship. Gambill got the win in the Blackhawks’ first four state playoff games. He finished with a career record of 28-7, among the best in school history.

Has it really been a decade?

It doesn’t seem like it was that long ago that West Wilkes beat Dixon in three games to win the North Carolina High School Athletic Association 1A state baseball championship, its first title in a major team sport.

The 2010 season that saw the program’s crowning achievement was also a watershed year for baseball in Wilkes County. Wilkes Central had its best season in program history, winning 28 games and the first of five consecutive conference championships. Wilkes Central, West Wilkes and East Wilkes finished 1-2-3 in the standings that season, and North Wilkes won more games than it had in the two previous seasons combined. All four schools earned state playoff berths.

But on a steamy June night far away from the friendly confines of Millers Creek, the Blackhawks were the last team standing.

Baseball and other high school spring sports in North Carolina were canceled out of caution due to the coronavirus pandemic. West Wilkes had originally planned to honor the 2010 team as part of an Alumni Night celebration in April.

The Blackhawks were a combined 44-13 in 2008 and 2009 under Ben Wellborn, a Watauga High School and Appalachian State University alumnus who took over the program from Daniel Ward in 2007.

And if Ward — who won one conference championship and three tournament titles — preached “championship baseball,” Wellborn took it to a different level.

In an interview about his first West Wilkes team, Wellborn said, “Any time, no matter what your record was the previous year, you should go for the highest goal that you could possibly achieve. The highest thing we can do is a state championship, and that’s certainly our goal. If we were 4-25 (the year before), that would still be our goal, because that’s what you’ve got to go after. Otherwise, when you step on the field, you’re selling yourself short if you don’t go for that goal.”

The 2008 and 2009 West Wilkes teams were 28-4 in conference play, and the only criticism of them is that they peaked too early. Neither team went past the second round of the state playoffs.

In addition to losing a large group of seniors from those two teams — including all-state selections Chris Barger and Josh Zumbrook — West Wilkes, along with East Wilkes, Alleghany and Elkin, left the nine-team 1A Northwest Conference and joined the revamped (and also nine-team) 1A/2A Mountain Valley Athletic Conference with Wilkes Central, North Wilkes, Starmount, Ashe County and Forbush.

Particularly at the beginning of the 2010 season, West Wilkes was a flawed team. The Blackhawks returned their top two pitchers in seniors Scott Gambill (11-3 in 2010 and 28-7 for his career) and Logan Hallock (9-3 in 2010 and 15-5 for his career), but there was precious little pitching depth. And the defense through the season’s first half was at times suspect.

There was also no obvious replacement for Zumbrook, a four-year starter at catcher who went on to play baseball at Appalachian State.

To make matters worse, due to construction of new facilities on the hill above the baseball field (a practice field and the softball field are there now), West Wilkes didn’t play a home game until April.

West Wilkes wasn’t the best team in the state. Dixon, the Eastern Region champion, won 27 games and had the state’s 1A player of the year in Rookie Davis. In the Western Region, Murphy started its season with 23 straight wins.

The Blackhawks weren’t even the best team in their conference, finishing three games behind Wilkes Central and losing the first two meetings by a combined 28-1 score.

But as the season progressed, they jelled, finishing the regular season with seven wins in eight games.

“If you had asked if I’d be here during the first third of our season, I would have told you that it would be an absolute miracle,” Gambill said after winning the state championship. “But from halfway through the season to right now, we’ve pulled together as a team.

“This team is unreal. We’ve had two different ball teams this year. The team we had at the beginning of the year is completely different than the team we had tonight. It’s amazing.”

The season’s turning point came after a pair of lopsided home losses, 17-0 to Wilkes Central and 15-6 to 1A power East Surry, whom the Blackhawks had beaten to win the 2009 Northwest Conference tournament.

The Blackhawks rallied to beat perennial power Forbush 8-7 and beat East Wilkes in extra innings for the second time that season on a squeeze bunt by senior second baseman Ethan Church. Three days after that, in the penultimate game of the regular season, Elkin’s Ethan Creed took a no-hitter into the fifth inning, only to give up nine runs in what became West Wilkes’ 10-3 win.

That game also served as the return of senior designated hitter Jacob Shepherd, who had a pinch-hit home run. Shepherd had missed two weeks after being hit below his right eye by a batted ball.

Shepherd would of course play a pivotal role in the coming weeks.

Wellborn resolved the catching situation with a rotation of Hallock and junior Andrew Ortiz, who would catch when Hallock pitched. Sophomore Tyler Stotler took Hallock’s spot at third base, and freshman Will Shepherd (Jacob’s younger brother) became the shortstop.

During a difficult round of infield before a conference tournament semifinal win over East Wilkes, Wellborn made what in hindsight was a prescient move, switching Stotler to shortstop and Shepherd to third base, the positions they would play the remainder of the postseason.

“A game above all games”

West Wilkes reached the finals of the MVAC tournament with a 12-8 quarterfinal win over North Wilkes and an 11-1 semifinal win over East Wilkes in which Gambill threw a one-hitter for the Blackhawks’ seventh straight win.

That set up the third meeting of the season between the Blackhawks and top-seeded Wilkes Central in the finals at Forbush High School, their first meeting in a tournament final since 2003.

Hallock, who got the win for West Wilkes in the quarterfinals against North Wilkes, drew the start for the Blackhawks, while the Eagles went with junior Parks Smithey, who would finish the season with 10 wins.

Will Shepherd scored on an error and Ethan Church scored on Hallock’s sacrifice fly to give the Blackhawks a 4-3 lead after four innings.

It was still 4-3 in the bottom of the seventh when Luke Gragg, the MVAC’s player of the year, drew a walk to start the inning off Gambill, pitching his second inning of relief. Gragg went to second on a groundout and to third on Gambill’s balk.

Junior William Johnson tied the game with a sacrifice fly.

And there it stayed until the 11th, when Johnson singled against reliever Nick Wilcox to score sophomore Stefan Susi, ending a three-hour, 20-minute marathon and giving the Eagles a 5-4 win.

It was the longest game either team played that season. They have played only one other extra-inning game in their last 29 meetings.

“It’s a rivalry like no other that I’ve been associated with,” said Terry Johnson, Wilkes Central’s head coach. “We knew coming in that these guys were going to give us a game that would be above all games.”

The Eagles would win three games in the state playoffs, including a 7-5 come-from-behind over Polk County on senior Ryan Harrold’s sixth-inning two-run home run, before losing in the fourth round to Surry Central.

West Wilkes fell to 15-10 with the loss, but would earn the split conference’s top 1A seed for the state playoffs.

And after the two earlier blowout losses, the Blackhawks showed that they could play with top-flight competition, a lesson that would serve them well in the weeks to come.

“I don’t think Wilkes Central had seen us in our first two games, because we certainly didn’t show up,” Wellborn said after the tournament finals. “But we definitely showed up tonight.”

In fact, the case could be made that West Wilkes’ run to the state championship started with a loss.

(Coming in part two—West Wilkes played its best baseball of the season during the state playoffs.)

A few thunderstorms in the evening. Mainly clear skies after midnight. Low 68F. Winds light and variable. Chance of rain 40%.