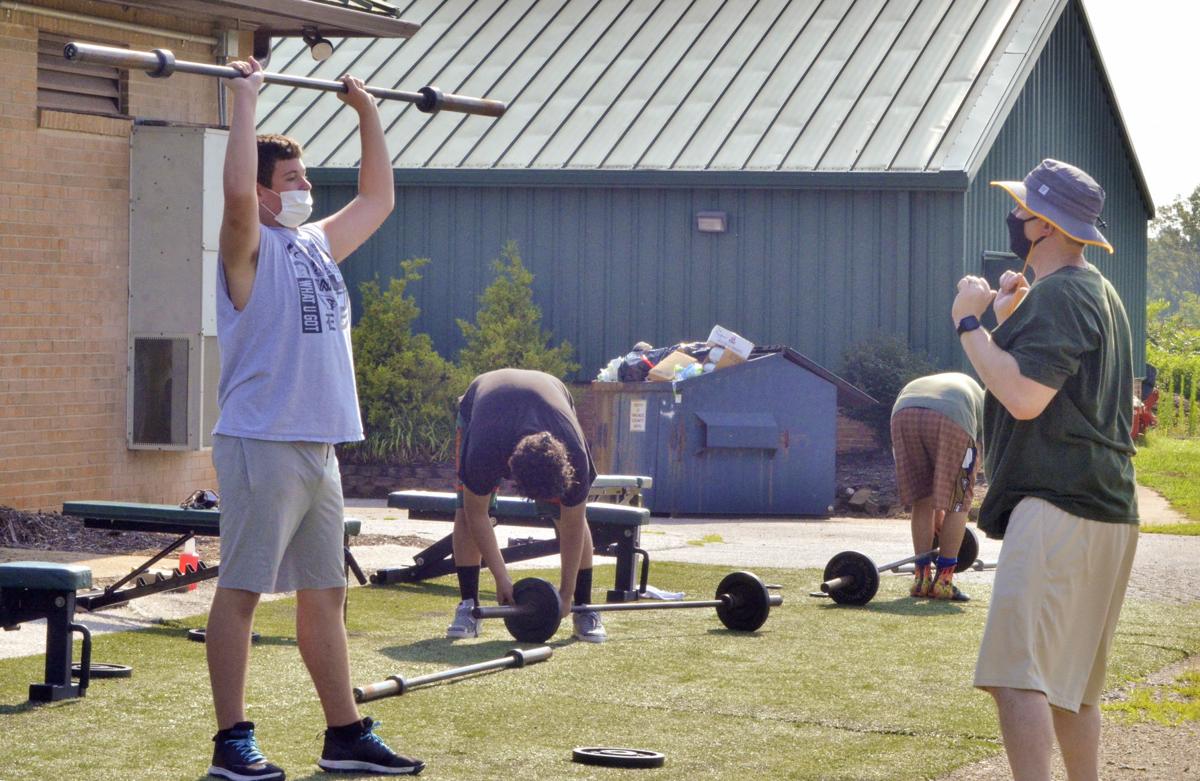 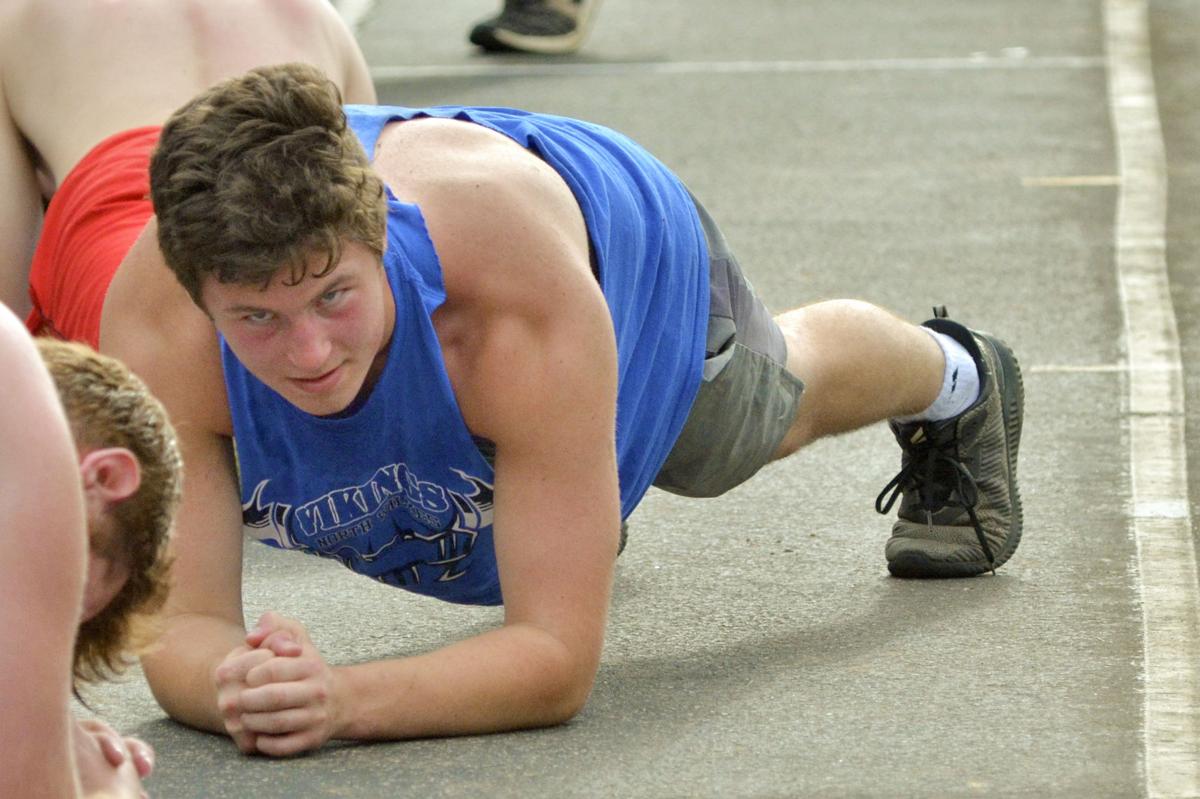 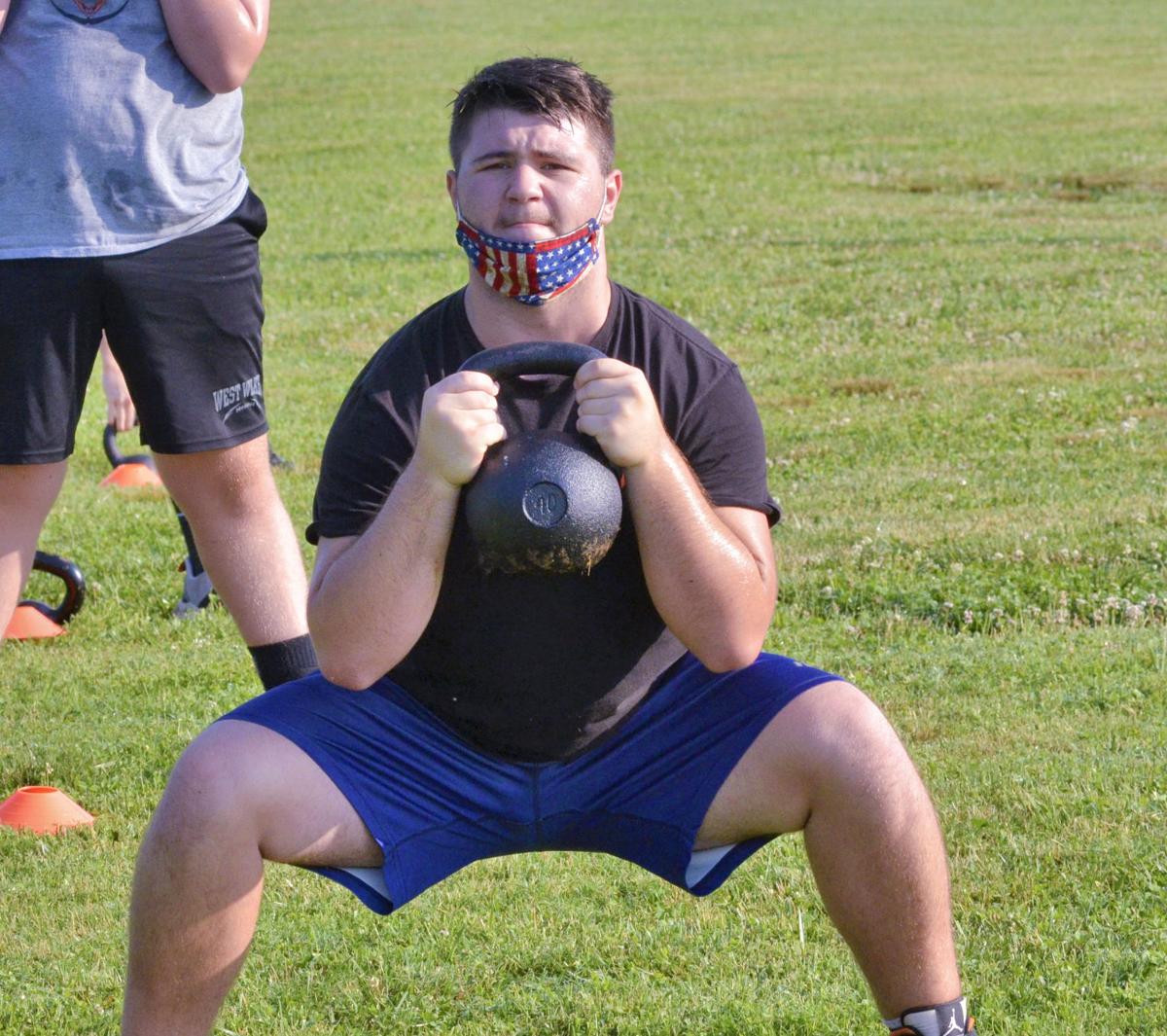 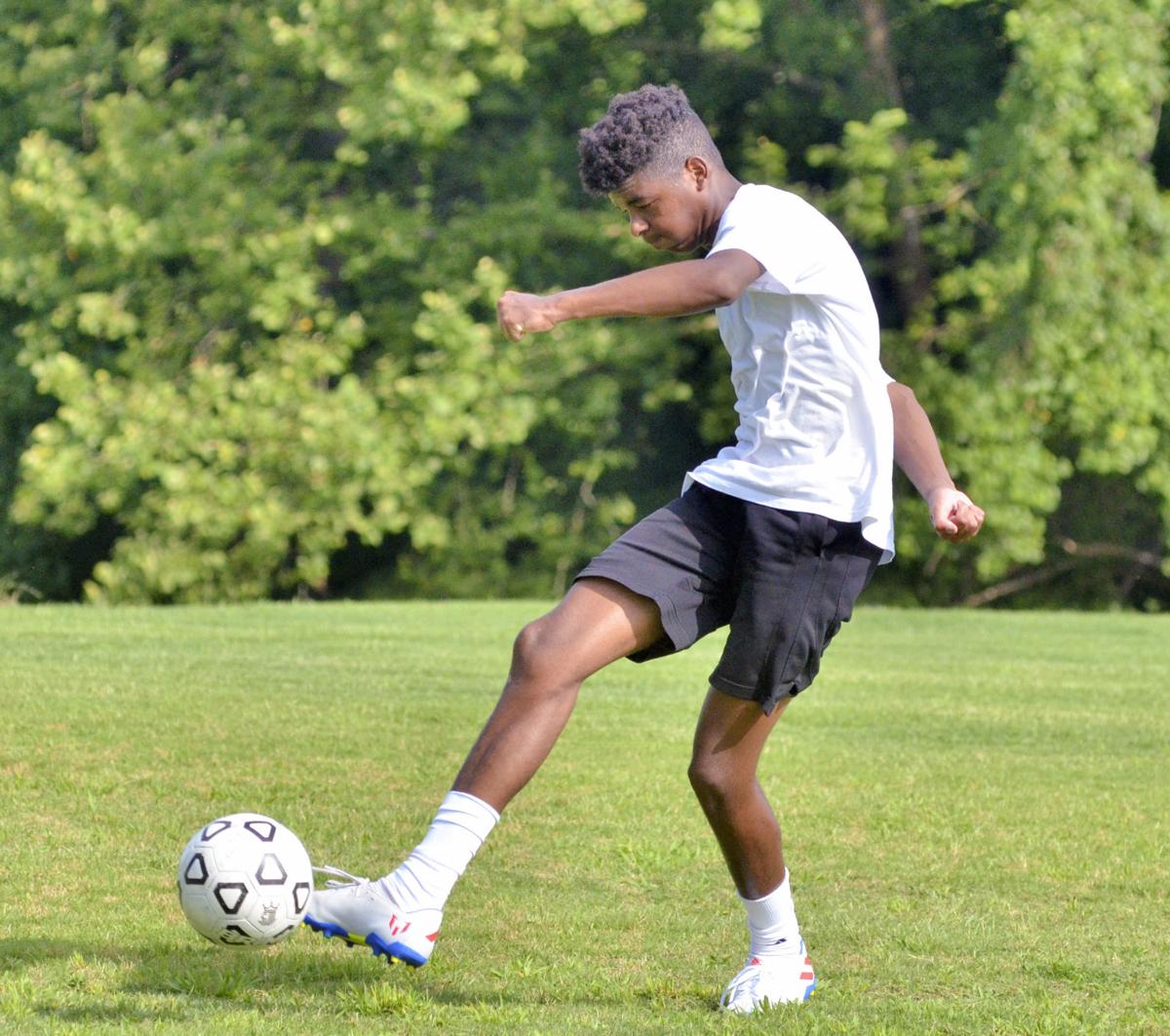 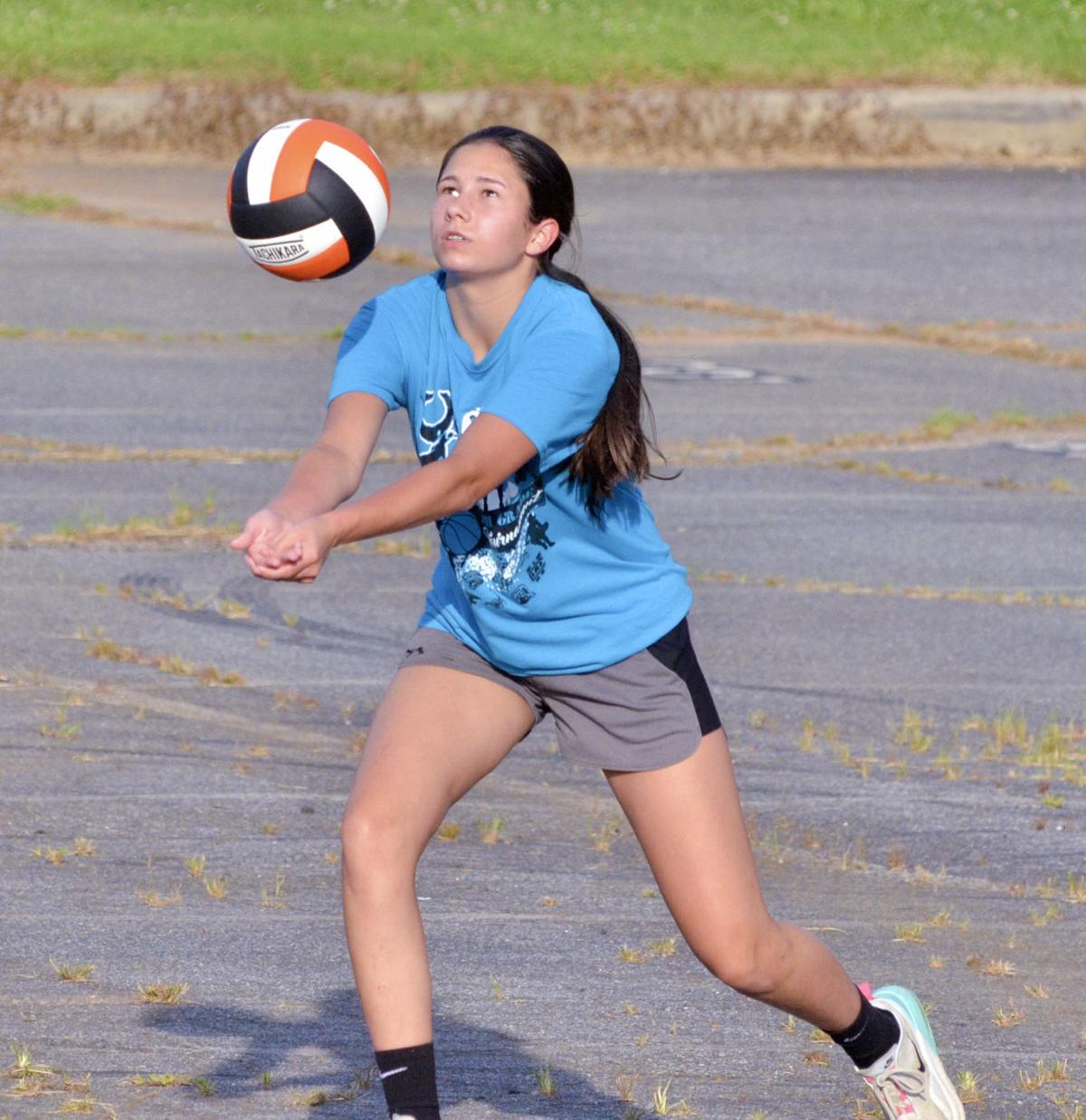 KYLEE MARTIN practices her ball control in one of West Wilkes’ workouts on Monday night. Per NCHSAA guidelines, players had to have their own ball and could not pass it to another person.

The wait was over in more ways than one for Wilkes County high school athletics on Monday morning.

Three of the four Wilkes County football programs started their summer workouts on Monday. East Wilkes held its orientation on Monday and will begin workouts on Thursday.

Several surrounding county school systems, such as Charlotte-Mecklenburg, Winston-Salem/Forsyth and Wake, have elected to postpone until July 20.

But when asked the decision to stick with Monday as the target start date, East Wilkes Athletic Director Justin Call stated that, “Numbers were good enough to start.”

While the conditions for those workouts were different than any other off-season, Wilkes Central Head Coach Ron Turner was just happy to be back around his players. He also understands that safety is of the utmost importance.

Turner, who is entering his seventh season as the Eagles’ headman, is currently the longest-tenured Wilkes County head football coach.

“When you’re dealing with people’s children, you’ve got to treat them like they’re your own children, and safety’s got to be paramount,” said Turner. “There’s so much of this stuff that we still don’t know answers to. Everything that we’re doing is geared around, first, can we do it within the guidelines and do it safely. Now, if we can get beyond that, then of course, we’re excited about the football stuff too but we’re just excited that we can be out here doing anything.

“We’ll be very limited, football-wise, in what we can do because of the guidelines and all this stuff going on,” added Turner. “But just to have them out here, and get them back around each other, we hope it gets them excited about the football season and back in the grind of doing stuff.”

Monday’s workouts were an introduction of sorts for David Wojtecki and Philip Collett — the new head football coaches at North Wilkes and West Wilkes, respectively.

Wojtecki, who was hired by the Vikings in early April, had not had any in-person interaction with his team until Monday morning.

“I’ve run into a few who have introduced themselves to me out in the community but this was the first day having them here to work out and things that way, so it was a decent little look at what we’ve got for the first day,” said Wojtecki.

Because of the Phase One restrictions, which the North Carolina High School Athletic Association instituted last month, no more than 25 people can be in one outside gathering at a time.

This has forced the Vikings’ new head coach to work with his teams in small groups, or pods. North Wilkes had three different sessions going on Monday.

“With how we’ve planned out what we’re doing, it has forced us to do certain things where we’re apart from each other, where it’s just conditioning, it’s just body weight activities, so we don’t fall into any parameters or restrictions that we have a question with,” said Wojtecki. “Everything that we have planned out as a staff has been to make sure that we’re staying within our restrictions.”

In addition to limits on gatherings, teams are also limited in using a football (or any athletic ball as it can only be used by one person and must be disinfected at the conclusion of practice) and cannot use an indoor weight room, which has forced Wojtecki and his fellow coachs to concentrate more on conditioning.

The NCHSAA recently extended its Phase One of a return to athletics from Monday to July 17, which allows for no contact and only conditioning drills that allow for proper social distancing.

“Your hands are tied on a lot of things but you’ve just got to do what you can,” said Wojtecki. “Right now, doing the conditioning and only the conditioning right now has actually been pretty good because they wouldn’t be able to do the skill set that we needed them to do without being in shape. Hopefully, one or two weeks of this and maybe we can go into a new phase and we’ll be good.”

Much like Wojtecki, Collett is also adjusting to a new team after being hired by West Wilkes in late February.

Collett had met the returning players and was already working on spring workouts before COVID-19 shut down all high school sports and instructional gatherings on March 12.

But despite being behind schedule compared to many of his coaching peers, Collett is doing what he can to make the best out of the situation.

“Basically I met the team, we had a meeting and put out the spring schedule, workout dates, seven-on-seven dates all ready to go; the next week, they shut it down — it was pretty disheartening,” said Collett. “It feels like a really long time since I’ve done any football at all. Even though this doesn’t really feel like football because we can’t have a ball, can’t hit a sled, at least we can get some physical conditioning done.”

In addition to limits on social distancing, Collett felt a key to staying safe was enforcing the temperature checks.

All players, coaches and other personnel (including media members) had their temperatures taken as they arrived on campus on Monday and will continue daily. Collett also stated that if one session had a member come down with coronavirus symptoms, only that session would be required to be quarantined.

“The biggest thing is temperature check when they first get here and if anybody has a temperature, they’ve got to go home,” said Collett when asked about safety precautions. “If we were to have an incident where somebody tested positive in this session, that session would be quarantined for two weeks. That wouldn’t affect session two and session three.”

Teams will continue summer workouts up until the first official day of practice for the 2020-21 season, which is scheduled for Aug. 1.

First scrimmages are allowed to begin on Aug. 11 while the first week of the regular season is scheduled for Aug. 21.

Note: Look for more on East Wilkes starting up summer workouts (and photos from the workouts of other athletic programs) in next week’s edition of The Wilkes Journal-Patriot.

“Hopefully, it's made our kids appreciate it. The spring can be hard, that's a grind, kids are tired in the springtime, but hopefully they've missed it and are excited to be back out there. Hopefully, they're as excited to be back as the coaches are.” — Wilkes Central Head Football Coach Ron Turner on the resumption of summer workouts.

Partly cloudy in the morning followed by scattered thunderstorms in the afternoon. High 89F. Winds light and variable. Chance of rain 50%.