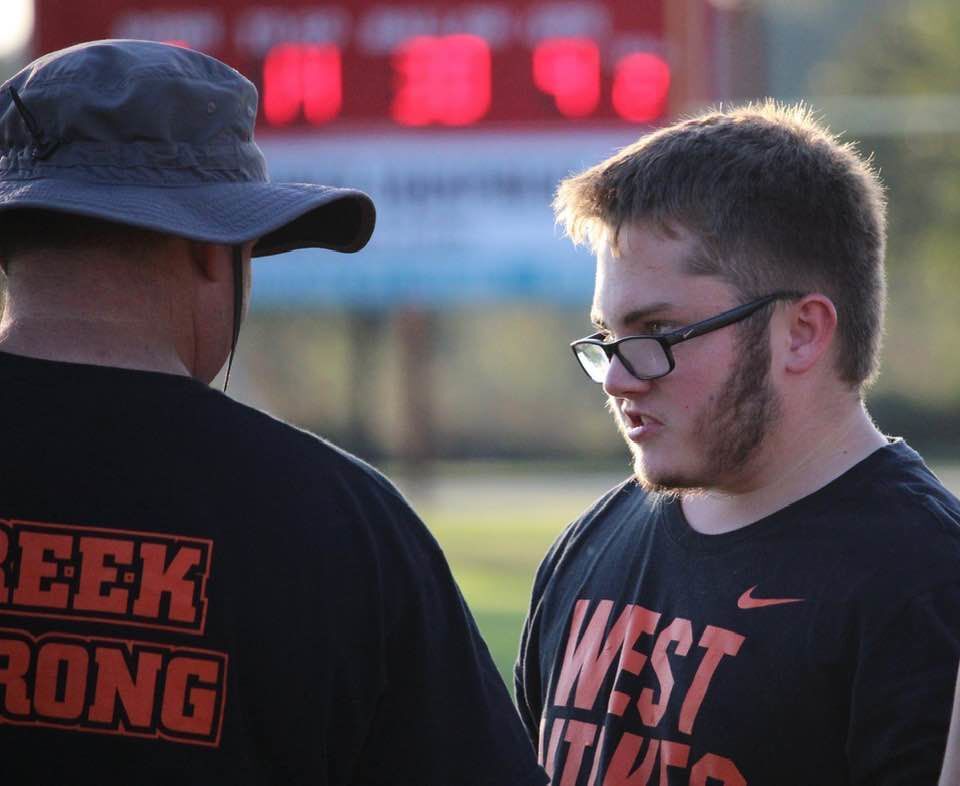 Dawson Martin has managed several sports teams at West Middle and West High schools. Here, he is managing affairs on the football sideline alongside his father, Robbie Martin. 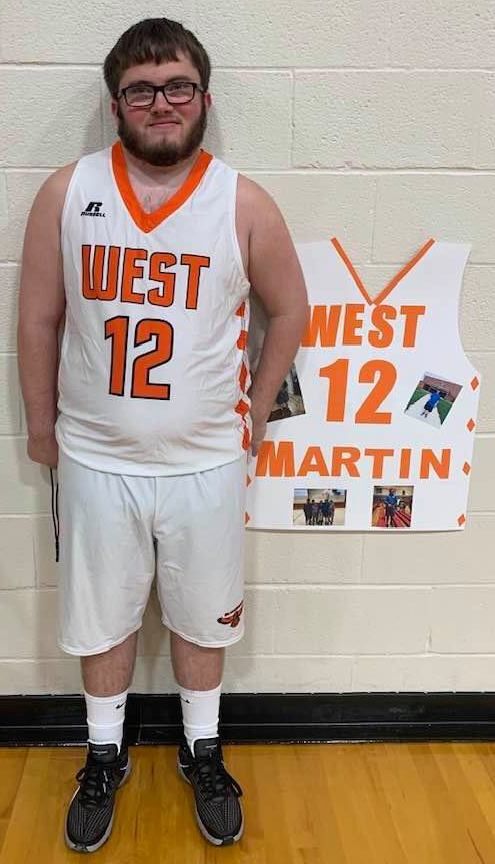 Dawson Martin stands next to the replica jersey created for him, as a senior student-athlete, at West Wilkes High School. 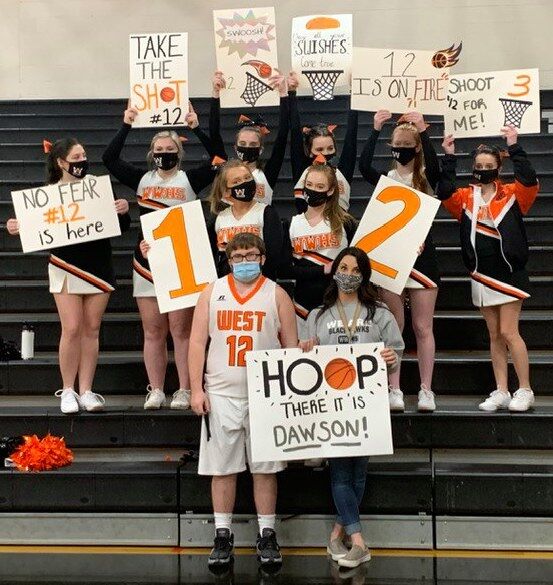 The West Wilkes cheerleaders made these signs recently in support of senior Dawson Martin. 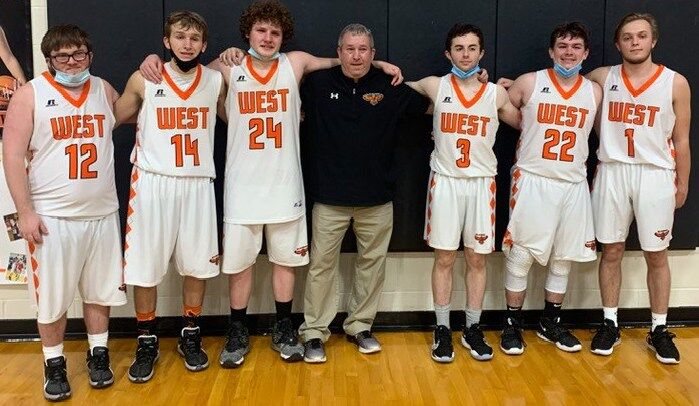 Dawson Martin has managed several sports teams at West Middle and West High schools. Here, he is managing affairs on the football sideline alongside his father, Robbie Martin.

Dawson Martin stands next to the replica jersey created for him, as a senior student-athlete, at West Wilkes High School.

The West Wilkes cheerleaders made these signs recently in support of senior Dawson Martin.

In the final seconds of his final home game, the West Wilkes basketball player received a bounce pass from fellow senior Riley Ledford, took dead aim at the basket from about 23 feet away and let the ball fly from the left wing with both hands.

It flew straight and true. Bottom of the net.

“It felt great,” recalled Dawson in a recent interview. “I was so excited. All of my teammates and coaches ran to me. Some of the audience ran towards me, too.”

And the crowd—or, what qualifies as a crowd these days during the pandemic—went wild. After the first round of cheers, someone from the stands yelled, “Dawwwwson!” and then came the second boisterous ovation.

The audience celebrated not just the only three points of Dawson Martin’s high school basketball career—they celebrated the inspiring young man who scored them.

(Editor’s note: Video of Dawson’s buzzer-beating 3-pointer can be seen at t.ly/qdmK)

Dawson Martin is 18 years old and has never given up. Since sixth grade, he tried out six times for various basketball teams. He was cut every time.

Every time he was cut, he still wanted to help out the squad, so he volunteered as team manager. He has served many basketball, football and baseball teams at West Middle and West High in that capacity.

Still, Dawson never gave up his dream of actually playing on a basketball team, to be able to don a real jersey and lace up his sneakers like his idol, pro player Kevin Durant.

On his seventh tryout, Dawson made it. He was officially a member of Scottie Greene’s 2021 varsity basketball club. Blackhawk number 12.

Making the team “felt better than anything that had happened in my life,” he recalled.

Greene calls Dawson “one of the best human beings I have ever been around. Dawson Martin makes everyone around him a better person.”

Dawson’s mother, Melissa Martin, knew he was exceptional from the day he entered her life, on Dec. 10, 2002. Dawson was born with a rare spinal condition that affects his head’s mobility.

Dawson has Arnold-Chiari malformation, which is a disorder in which brain tissue extends into his spinal canal. It occurs when part of the skull is abnormally small or misshapen.

Doctors also diagnosed Dawson with platybasia, a spinal disease in which the occipital bone and cervical spine are malformed, and basilar invagination, which causes a compression of his brain stem and spinal cord.

Dawson’s conditions were present since birth but didn’t manifest themselves until he was about 2 years old. On three separate occasions, he had to be revived after he stopped breathing.

“God saved him because He had plans for him,” Melissa reasoned. “He knew that Dawson would touch a lot of lives, and he has definitely done that.”

Dawson’s first surgery, when he was 2, took 14 hours and involved the removal of part of his skull and its replacement with donor tissue.

Surgeons fused his neck together with a bone from his rib.

The eight-hour procedure was necessary because his spinal fluid was not flowing properly.

As a result, Dawson’s neck is fused and he has limited range of motion with his head. But that never limited his love of sports or restricted his love of life.

“What’s important to me are my family and God,” he said. “I also love my teammates and coaches.”

As Dawson was growing up, Melissa remembered him following older brother Cameron around wherever he would go.

Dawson has two younger brothers—Rylan and Corbin—and the family of seven lives in Millers Creek.

Melissa is a home health nurse and father Robbie Martin is a deputy with the Wilkes Sheriff’s Office.

Dawson grew up a loyal friend to many, a best brother to four siblings, and a dedicated student in the occupational course of study program for exceptional children at West High.

His favorite classes at West are weightlifting and principles of business and finance.

After graduating, he said he might take some time off to work but wants to help coach basketball or baseball.

Even with his studies and manager duties, Dawson also found time to buss tables at Almost on the Lake. He loves to fish but his first love is, and will always be, basketball.

“If you know Dawson, you know that Dawson really loves basketball,” said Melissa. One of Dawson’s best days was when, in 2017, he got to see Durant play live in Charlotte.

In West’s next to last home game on Feb. 12, Dawson got the start against North Wilkes.

Dawson couldn’t connect on three 3-point attempts but did grab West’s first rebound of the game, about a couple minutes into the contest, to the cheers of the home audience.

After West took a 20-second timeout, he left the game, but not before receiving big hugs and high fives from all his coaches and teammates.

Never one to give up, Dawson got his long-range redemption four days later in the final seconds against Alleghany.

“We didn’t play very well at all and lost the game,” noted Greene. “However, some things in life are way more important than winning games. Dawson has a moment that he and no one will ever forget.”

In a life already full of remarkable moments, Dawson Martin added an unforgettable one on Feb. 16.

Those who know him best are convinced, though, it won’t be his last.