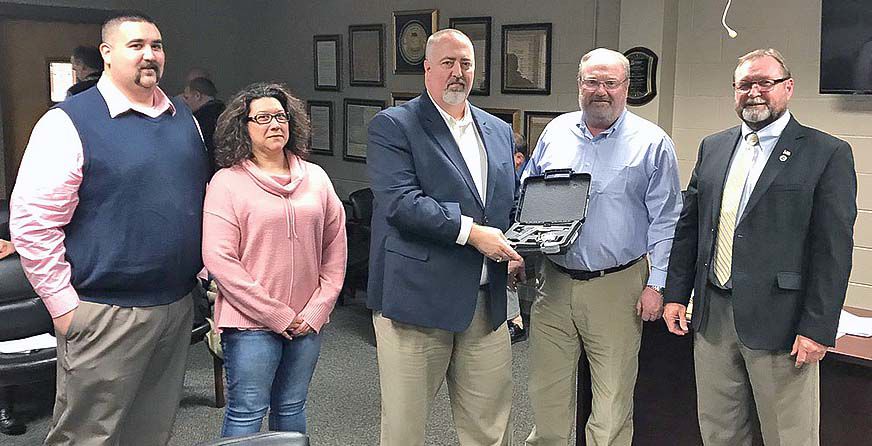 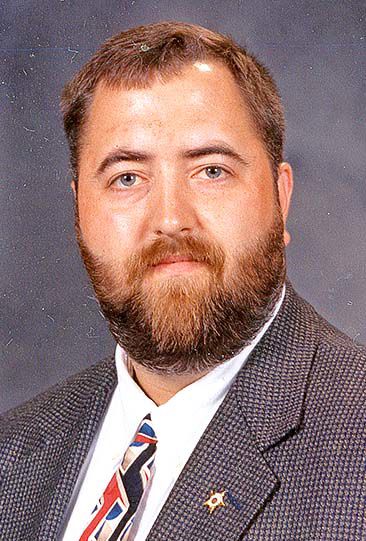 Capt. Brandon Absher retired from the Wilkes Sheriff’s Office last month after 30 years in a career that he knew he wanted even as a child.

Absher’s maternal grandfather, James Burette “J.B.” Wiles, was chief of security at Holly Farms and was sworn as a Wilkesboro police officer. Hoke Wiles, Burette Wiles’ brother, was Wilkes sheriff from 1966 to 1974.

Absher, 50, was close to his paternal grandparents, Hansel and Maude Vannoy Absher, who both worked for the Wilkes Sheriff’s Office. Maude Absher was a “matron” (female jailer) and cook in the Wilkes County Jail and Hansel Absher was a deputy sheriff and later also a jailer.

Absher said his father, the late Ken Absher, discouraged him from going into law enforcement, saying it’s “just a four-year career, eight at best.” He was referring to the lack of job security as newly-elected sheriffs at one time often hired new staff to replace those who worked in the prior administration.

Although not a law enforcement officer, Absher’s father was awarded a Purple Heart and other medals while in the Army’s First Infantry Division (“Big Red One”) during the Vietnam War.

Absher graduated from East Wilkes High School in 1988, majored in criminal justice at Wilkes Community College and enrolled in the Basic Law Enforcement Training (BLET) program on the WCC campus in August 1990.

Fred Myers, then Wilkes sheriff, agreed to provide Absher the required sponsorship for BLET when told that his grandparents were Hansel and Maude Absher. Myers told Absher that meant he “was from good stock.”

Absher graduated from BLET in December 1990. One of his classmates, David Carson, is now Wilkes Sheriff’s Office chief deputy. Another, Fletcher Reeves, works for the state as chief probation and parole officer in Wilkes.

Dane Mastin was in the first year of his first term as sheriff when he hired Absher as a part-time deputy sheriff on patrol at W. Kerr Scott Reservoir and elsewhere in February 1991. Absher was hired as a full-time deputy in April 1992, working mostly a night shift with Lt. Jeff Hemric as his supervisor.

In August 1996, Absher was promoted to detective and assigned to a special narcotics enforcement team with Hemric and Dennis Eller and David Johnson of the Wilkesboro and North Wilkesboro police departments respectively.

Absher worked in the criminal investigations division from 1997 until he was transferred back to the patrol division as a sergeant in 2005, supervising a night shift patrol crew. He was later promoted to lieutenant.

From 2012 until he retired, Absher supervised criminal investigations as a captain in charge of the detective division. He also was responsible for deputies serving as school resource officers in the Wilkes County Schools.

He was closely involved in investigating numerous murders and other serious Wilkes criminal cases.

He said sheriff’s office employees are also better educated now, with most having at least a two-year degree and many a four-year degree.

Amid all these improvements, added Absher, he still remembers Mastin once saying, “I can take anyone out there and give them the training, but if they don’t have the heart they won’t succeed. It’s the willingness to do the job and serve the public that’s most important.”

Absher said he agrees about the value of having a public servant mentality.

He added, “I think a lot of people start out in this line of work thinking it’s going to be like the TV show, ‘Miami Vice,’ everyday, but it’s more like the ‘Andy Griffith Show.’” Despite that, he added, “Wilkes sees pretty much the same crimes as Charlotte, just not as much volume.”

He continued, “By and large, Wilkes County is a good place to live and work and raise a family.” Absher and his wife, Fonda Stone Absher, raised a son, J.B., and a daughter, Lindsay, in the Mulberry community.

Absher said only about 2% of the population of Wilkes—including many in a few certain families—gets in trouble with the law. In recent years, he sometimes dealt with offenders who were the grandchildren of offenders he encountered in early years of his career.

Absher said people over age 35 in Wilkes still tend to treat law enforcement officers with respect, “but younger people have more of a ‘you’ve got to earn my respect’ attitude.”

He added, “When I was growing up, if I got paddled at school, I knew I was going to get it at home also. Now, young people are less often taught to take ownership of their mistakes.”

Absher said another change is that people more often now call for assistance from the sheriff’s office for reasons not involving crimes. “Lots of times, it’s where people aren’t getting along with their neighbors or their relatives. Sometimes, they’re just looking for advice or need someone to vent their frustrations to.”

Absher said Mastin and Chris Shew, the two sheriffs he worked for, were both adamant about deputies responding when citizens requested this “even if they were only going out to talk to someone…. I don’t know if there’s anything we wouldn’t come out for.”

He said he seldom had to deal with politics in his work. “Not one time did either sheriff (Mastin or Shew) ever tell me not to investigate something because of someone’s connection or who they were.”

Absher added, “I really enjoyed my time (with the sheriff’s office) and made some really good friends. In general, I have seen some of the best Wilkes County has to offer and some of the worst things a human being can do to another person. There are certainly some things I won’t miss.”

He said it’s notable that he worked in the Wilkes Sheriff’s Office for 30 years and only had two different sheriffs. “That says a lot about those two sheriffs and the people who worked for them.”

Absher said he has no immediate plans for all of his new free time, except he hopes to spend more time with his first grandchild, Hank, born in October.

Mostly cloudy in the evening then periods of showers after midnight. Low 47F. Winds SW at 5 to 10 mph. Chance of rain 50%.

Rain showers in the evening becoming a steady light rain overnight. Low around 55F. Winds SSW at 5 to 10 mph. Chance of rain 60%.