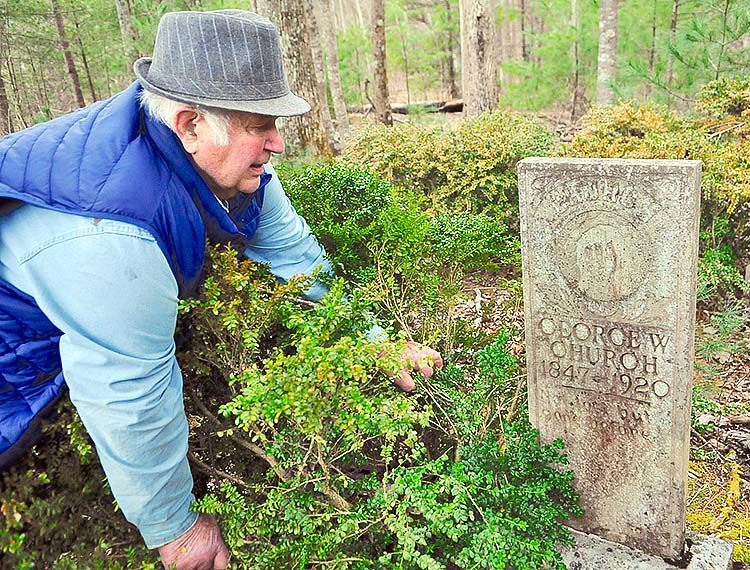 Day Church gets a better look at the gravestone of George Washington Church, grandson of “Yankee John” Church, in a small cemetery on  Patton Ridge Road. 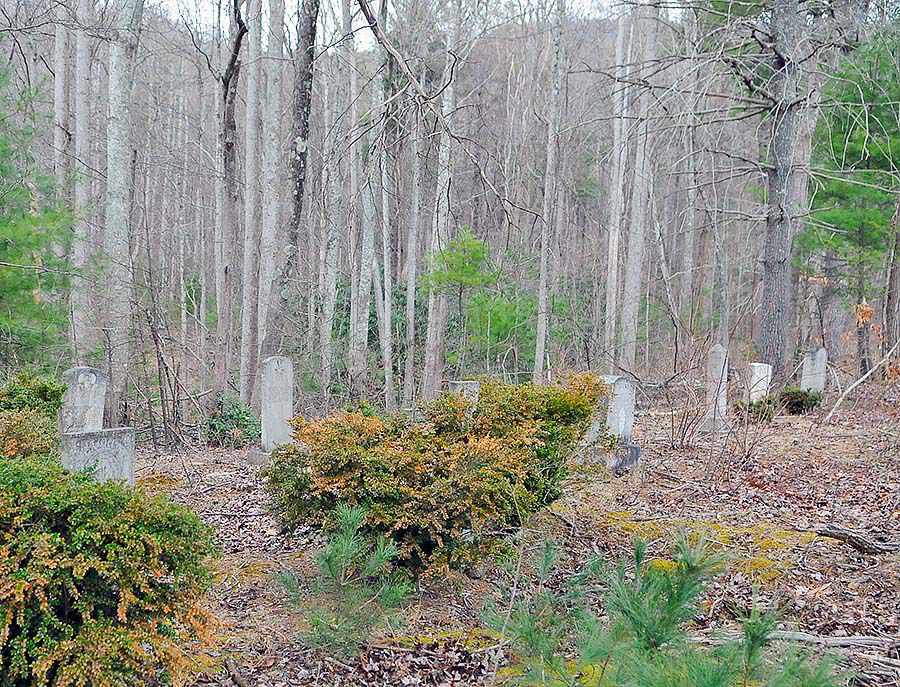 George Washington Church’s chimney is near this cemetery where he is buried on Patton Ridge Road near Summit. 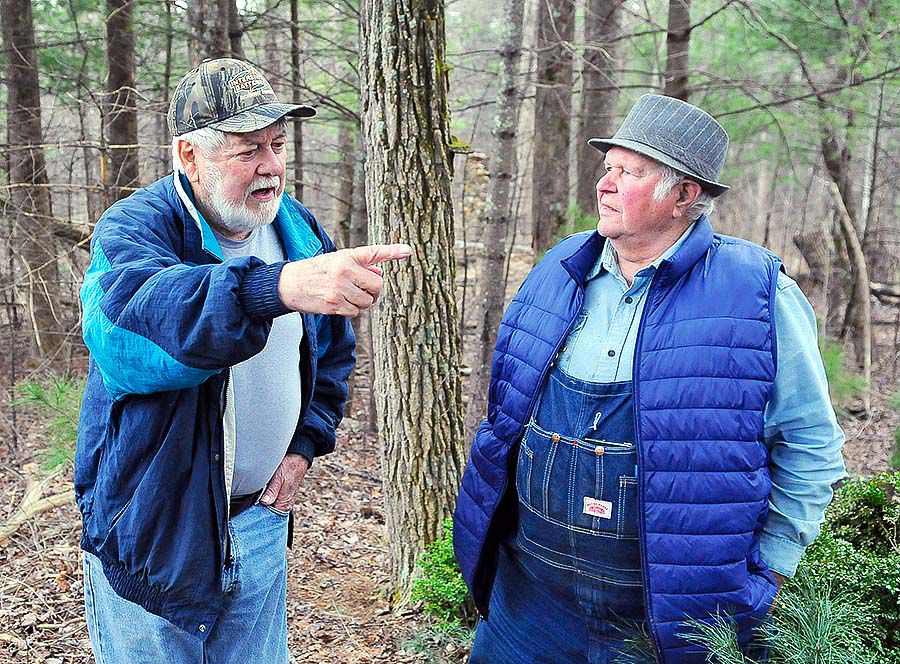 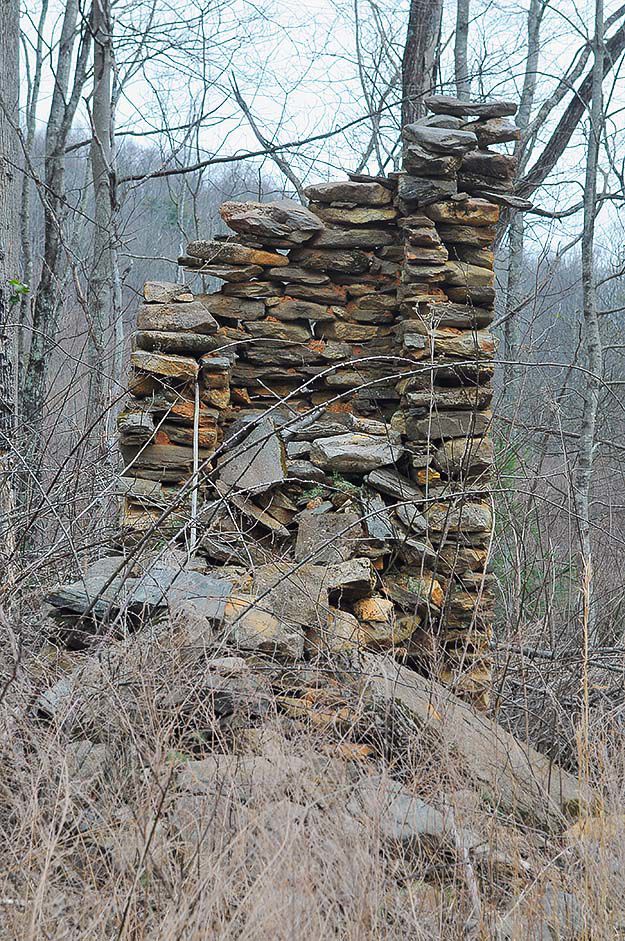 George Washington Church’s chimney remains near the cemetery where he is buried on Patton Ridge Road near Summit.

Day Church gets a better look at the gravestone of George Washington Church, grandson of “Yankee John” Church, in a small cemetery on  Patton Ridge Road.

George Washington Church’s chimney is near this cemetery where he is buried on Patton Ridge Road near Summit.

Any local phone book will show what Day Church of Purlear and Zelotese Walsh of Ferguson know well from over 20 years of research—the Churches are among Wilkes County’s most prolific families.

Church and Walsh work together to maintain up-to-date documentation of descendants (including spouses) of pioneer Wilkes resident “Yankee” John Church. They have recorded about 57,000 of these descendants all over the world.

The two have visited courthouses, libraries and countless individuals and have utilized numerous other sources. Neither is especially comfortable using the internet, and they’re wary of the accuracy of online genealogical information.

Church said he and Walsh have expanded on the unpublished results of Dr. John Scalf Jr.’s research on Yankee John Church and his descendants. Scalf, who died in 1995, was a sociology professor at the University of North Carolina at Wilmington. His wife, Dorothy Campbell Scalf, was a North Wilkesboro native and descendant of Yankee John Church.

Yankee John had a total of 13 children in two marriages, setting the stage for generations of Church families with a dozen or more children. The children in his first marriage were Amos, John Jr., Benjamin, Phillip, Martha and Elijah. In his second marriage, they were Elisha, Joel, Aaron, Gabriel, Elizabeth “Betsy,” Massey and Anna.

Yankee John and his first wife, believed to be a Stamper, settled on Pine Swamp Creek near the South Fork of the New River in what now is southern Ashe County in the early 1770s.

After his first wife died, Yankee John married Jane Andrews in the 1790s and moved less than five miles as a crow flies due south from Pine Swamp “over the mountain” to a plateau on the southeastern slope of the Blue Ridge in Wilkes in what later was known as Patton Ridge.

Church said Yankee John died around 1806-1810 and was buried near the cabin where he lived with his second wife and children, just north of what now is Patton Ridge Road near the Summit section of Purlear.

Church, Walsh, Vernon Waters and others spent many hours in recent years looking for Yankee John’s grave without success. Their search is for a rock without inscription that Waters’ father, Regger Waters, pointed out while they were squirrel hunting over 60 years ago.

Waters said it was near the rock chimney of one of Yankee John’s grandsons, George Washington “Wash” Church, and the cemetery where Wash Church, his family and a few others are buried. Not far away is the rock chimney of Waters’ grandfather, James Lemley Waters.

Day Church cited plans to have a brief description of Yankee John’s life story inscribed on a large granite stone for placement along Patton Ridge Road near where he is buried. He said the stone was purchased with money raised at the annual Yankee John Church family reunion, held at Bald Mountain Baptist Church near West Jefferson.

Church said he and Walsh also have a goal of publishing a multi-volume history of Yankee John Church and his descendants, organized by each of his children and their descendants.

The nickname, “Yankee,” is based on the belief that he was born in a northern state, possibly Massachusetts. This differentiates him from another John Church, progenitor of a smaller Church family that came from near the Atlantic coast and settled in the upper Reddies River section of Wilkes in the late 1700s. Church refers to this as the “minor” set of Churches.

He said the two Church families may have been related in England before they came to America, but otherwise he isn’t aware of them being kin except through marriage.

Church is descended from the “minor” Churches and also Yankee John Church through his father, the late Vaughn Church of Purlear. His connection to Yankee John is through a son from his first marriage, Elijah Church.

Walsh said he isn’t related to Yankee John but his late wife, Lib Edmiston Walsh, was a direct descendant of Gabriel Church, a child from Yankee John’s second marriage.

Yankee John was living in Virginia in 1758, Rowan County in 1760 and what now is Ashe County starting in the early 1770s.

This is documented in birth dates and other information given in Revolutionary War pension applications of two of his sons, John Church Jr. and Amos Church, who served in Wilkes militia forces led by Col. Benjamin Cleveland and others that pursued Tories and Indians from 1778-1781.

Other records affirm where Yankee John and his two families lived, such as a bounty of 10 shillings paid to him for a wolf “scalp” in Rowan County on Oct. 3, 1764. Deed records also reflect his move to what now is Ashe and then to Wilkes.

Duplication of the same first names through the generations and sometimes in the same generations create challenges for people researching the Churches and many other families.

“Double Thumb” John Church, a man with two thumbs on one hand from the “minor” set of Churches, moved from the upper Reddies River in Wilkes to Prathers Creek in Alleghany County. He served in the Confederate Army in the Civil War, a period of divided loyalties in many Wilkes families. Some of the Churches served in the Union Army in the war but far more were in the Confederate Army.

A list of men from Wilkes in Confederate regiments in the Civil War in “Heritage of Wilkes, Volume II” shows 31 Churches, including 12 in the 26th N.C. Infantry. Five of the 31 died and at least eight were wounded.

Members of the family have been leaders in church, business, government and other aspects of life in Wilkes County and the surrounding area through every generation since Yankee John Church arrived here.