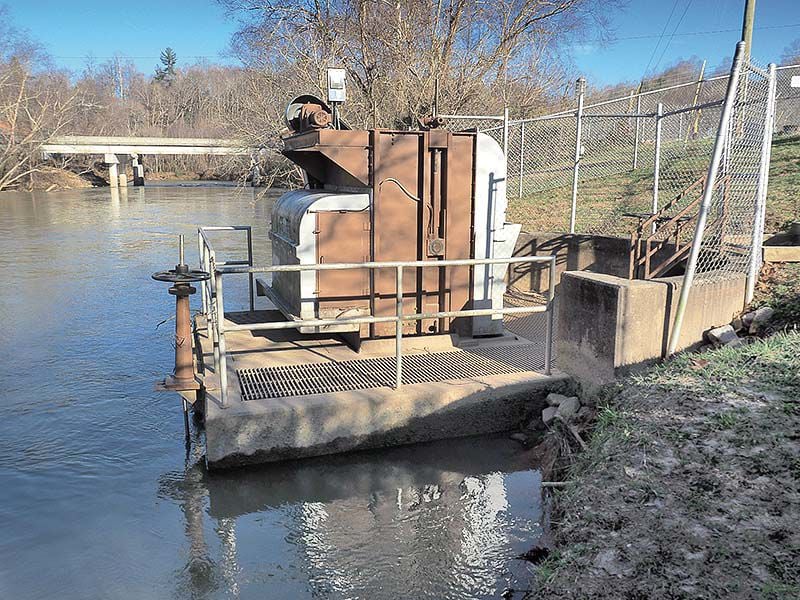 WILKESBORO WATER INTAKE and pump station site is about a mile upstream of where North Wilkesboro was advised to build a new intake and pump station. In the left background is the U.S. 421 bridge over the Yadkin. 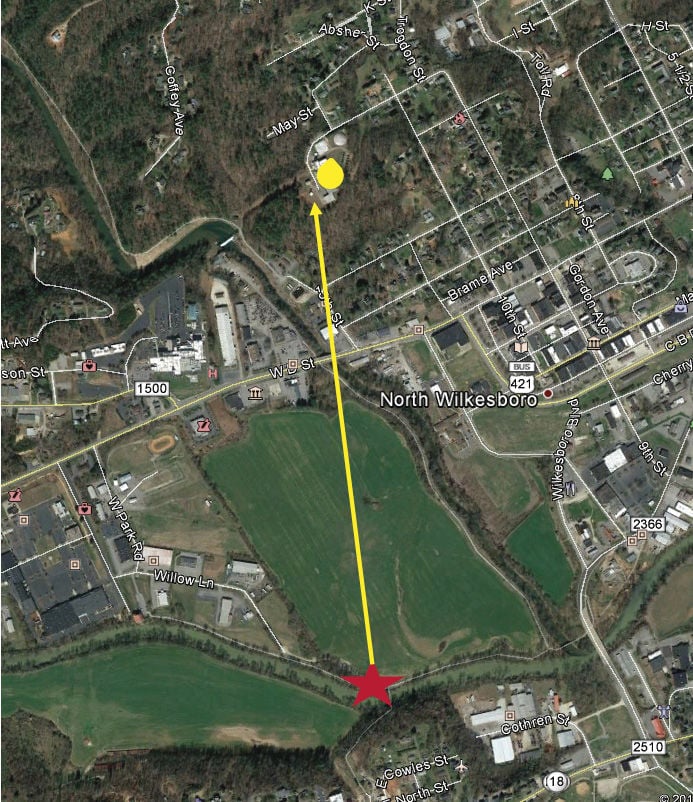 An engineering firm has recommended that the Town of North Wilkesboro build a raw water intake on the Yadkin River rather than on W. Kerr Scott Reservoir.

North Wilkesboro hired Kimley-Horn to conduct a study that included consideration of a Kerr Scott or Yadkin intake. North Wilkesboro now gets its water from the Reddies River.

Shoesmith said in his report that the cost of 35,770 feet (nearly seven miles) of 20-inch ductile iron pipeline needed to bring water from the proposed Kerr Scott intake to the North Wilkesboro Water Treatment Plant on I Street made that project prohibitively expensive. Kimley-Horn estimated the pipeline cost at $7.9 million.

Kimley-Horn estimated the cost of a Kerr Scott intake and pump station capable of providing North Wilkesboro with 6 million gallons per day (MGD), along with the pipeline, at $13.76 million. The estimate was $13.35 million with a 4.3 MGD pump station and the pipeline.

Earlier plans called for Wilkesboro and North Wilkesboro to split the cost of a project with an intake on Kerr Scott and pipelines to the two town water treatment plants. The intake was designed to produce 24 MGD of raw water at that point, but actually only 14 MGD due to the size of pipes to be installed.

Wilkesboro was to have rights to 65 percent (about 9 MGD) and North Wilkesboro rights to 35 percent (about 5 MGD) of this water. The two towns were to pay these same percentages of the debt. They decided to pursue other plans when the Kerr Scott project’s cost increased to at least $40 million last year.

On Tuesday, Shoesmith recommended building an intake on the Yadkin River near where the Yadkin River Greenway bridge crosses the Yadkin, just east of West Park, and pumping water from there to the North Wilkesboro Water Treatment Plant. He also recommended installing the Actiflo mechanical pre-treatment process to help remove sediments.

With the 5,525-foot-long water line, a pump station capable of pumping 4.3 million gallons of water (MGD) per day and contingencies, the cost of the Yadkin River intake option was estimated at $4.86 million. With a 6 MGD rather than a 4.3 MGD pump station, it was estimated at $5.27 million.

He said an easement allowing construction of the intake near the Greenway bridge over the Yadkin is already in place. This easement was acquired for the pipeline planned for the Kerr Scott intake.

Shoesmith said that because the current surface water classification of the Yadkin at the proposed intake site is Class C (not classified for drinking water), it would have to be reclassified by the state before an intake could be built there. Officials said this could take about 18 months.

“I don’t really see that (reclassification) being a problem. I see it as a regulatory hurdle that we’ll have to jump, but I think it’ll go through. Honestly, I was surprised it wasn’t already classified as drinking water because it’s just downstream of Wilkesboro’s.”

About a mile upstream, where the Town of Wilkesboro has its water intake and pump station, water from the river can be used for a public water system under the classification.

North Wilkesboro has a withdrawal agreement drawn up in 2012 for the proposed Kerr Scott intake that the state will honor even if the town changes the intake site to the Yadkin, said Shoesmith. The agreement allows for raw water withdrawal from 2.7 MGD to 4.2 MGD. Anything greater than 4.2 MGD would require a new regulatory review, he added.

Dale Shumate, the town’s public services director, confirmed during the meeting that the town wouldn’t abandon the Reddies intake. Shumate said the town’s current water usage is 2.6 to 2.7 MGD, with spikes approaching 3.0 MGD in the summer. The North Wilkesboro Water Treatment Plant’s current capacity is 4 MGD.

The Kimley-Horn study included consideration of building a new pump station at the current intake on the Reddies River. The current pump station there was built in the 1950s.

“The pumps are running really, really well. We found both of the pumps are actually running a little bit better than the manufacturer says a new pump will do. That was a really good result, and the pump station is in really good operating order,” said Shoesmith.

“Either of the pumps in their current condition can pump about 4.6 million gallons a day (MGD), which is greater than the plant’s pump capacity (of 4 MGD), so that works fine in this case but doesn’t give firm capacity for plant expansion with the existing pumps.”

The Kimley-Horn study cited high levels of turbidity in raw water from the Reddies River, which increases the town’s treatment costs.

Actiflo drastically reduces the turbidity of raw water before it enters the treatment plant. He said pre-treatment of water from Kerr Scott wouldn’t be necessary because that water naturally has less turbidity than river water.

“Looking at the data and talking to the plant operators, I don’t think this plan (without mechanical pretreatment) is a really good option,” said Shoesmith.

All the estimates Shoesmith provided are for infrastructure costs prior to the raw water entering the treatment plant. An increase in overall plant capacity would require additional upgrades to plant processes, he said.

When asked, Shoesmith didn’t have an estimate on the timeframe for completion of the Yadkin River intake project, but said the initial regulatory hurdles and reclassification process would likely take longer than the next phase entailing design, permitting and authorization to construct. He promised officials more details on a proposed timeline in a follow-up report later this month.

Wilkesboro Town Manager Ken Noland said during the meeting that the town has determined to work from its existing pump station site on the Yadkin and that the Wilkesboro Town Council is leaning toward making an application this spring with the state to secure funding of phase one of raw water capacity upgrades.

“We just don’t see the economic value of going to the lake—it only gets more expensive,” said Noland. “With steel as high as it is, I’d hate to even bid that project again.”

Noland said Wilkesboro plans to first upgrade its existing pump station and possibly upgrade the pipeline to the raw water plant. An Actiflo system will be installed at the pump station and the plant capacity will possibly be expanded, he said.

One of the decision points on expansion, he said, was whether North Wilkesboro decides to buy treated water from Wilkesboro. “If North Wilkesboro has an appetite to purchase water from us, we may add more capacity and sooner. We’re watching what you do, and we need to be in concert whatever we do.

“I don’t want to waste money to put something in for you to buy that you don’t have any intention of buying, but at the same time, if there’s an opportunity (to sell water to North Wilkesboro) we would do that. But it looks like you’ve got a cost-effective option in front of you to deal with your existing capacity and future capacity.”

Wilkesboro learned from its own preliminary engineering report from McGill Associates in August that it would cost $33.4 million to expand the town’s water treatment plant capacity to 16 MGD and $39.3 million to expand it to 20 MGD using Actiflo. The intake source would remain on the Yadkin, just upstream from the mouth of Moravian Creek.

Those figures were revised on Dec. 3, when McGill reported that phase one would cost about $19 million and phase two, which could be delayed several years, would cost just under $16 million. With completion of phase two, the raw water treatment plant’s capacity would be increased to 16 MGD.

McGill projected Wilkesboro’s average water demand to be 7.5 MGD in 2047, with a maximum of 12.8 MGD. Current capacity is 10 MGD, of which half is now used.

“Whatever we do,” concluded Noland, “let’s fix the problems we have with the (water) interconnections of the two towns. It just adds another level of safety for both of us.” Several North Wilkesboro commissioners were quick to agree with Noland.

During the North Wilkesboro board meeting Tuesday night that followed, South said he and Shumate believe the Yadkin intake with a 6 MGD pump station and two Actiflo systems “is the strategy we should use since Wilkesboro is not going to be part of the intake process. It’s always made sense to me that the Yadkin was a heckuva lot closer to us anyway. Once that cost (Kerr Scott) got so out of kilter, I just believe the better option is looking at the Yadkin.”

South told commissioners that if an intake on the Yadkin is the direction they want to take, he should tell the state very soon that North Wilkesboro and Wilkesboro both agreed to drop the Kerr Scott project “because they’re waiting to hear from us.”

Commissioner Joe Johnston said good things came out of the meeting of the two governing bodies. “It sounds like this (Actiflo) filtration system is catching steam since we first heard of it” from Wilkesboro.

Commissioner Debbie Ferguson said she was glad to see the Yadkin intake option because it saves the town a lot of money compared to the Kerr Scott option.

Commissioner Bert Hall added, “I do think we need to get with Wilkesboro and study our interconnections. That wasn’t part of this study, but it needs to be done.”

Under an agreement, the two towns must each pay half of about $1.5 million already spent on the Kerr Scott intake project. Hall noted that easements secured for the project can be used “so it’s not a complete waste.”

A few clouds from time to time. Low around 55F. Winds light and variable.

A few clouds. Low around 50F. Winds light and variable.