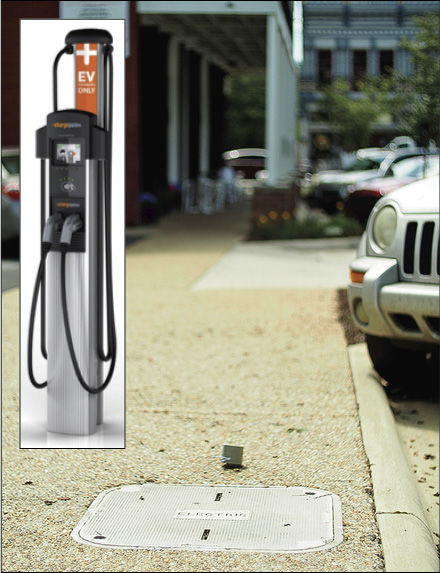 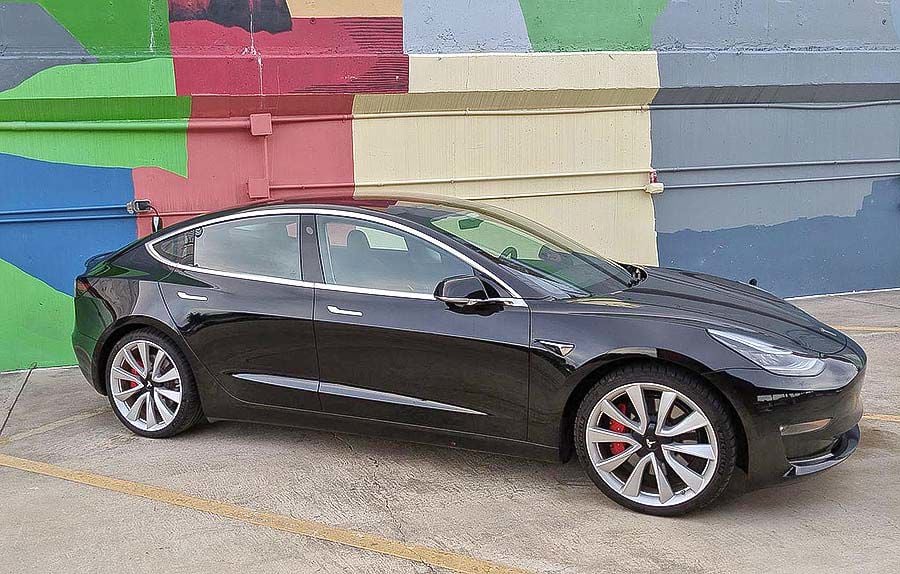 A TESLA MODEL 3 electric car hooks into the 240-volt wall outlet at the Yadkin Valley Marketplace in North Wilkesboro for a charge on July 21. The owner of the vehicle submitted the photo on the electric vehicle website plugshare.com.

A TESLA MODEL 3 electric car hooks into the 240-volt wall outlet at the Yadkin Valley Marketplace in North Wilkesboro for a charge on July 21. The owner of the vehicle submitted the photo on the electric vehicle website plugshare.com.

Carlton said Wednesday that one will be installed at mid-block within the sidewalk on the east side of Broad Street near the Wilkes Heritage Museum. An electrical transmission line stub marks the location.

He said the other charging station will be installed in the sidewalk along the west side of North Bridge Street on the other side of the museum. It will be near the southeast corner of the town-owned “Rock Building.”

Carlton said the public will be able to use the two ChargePoint CT4021 stations for free, at least for some initial period as part of efforts to bring visitors off U.S. 421 and into downtown.

Each freestanding unit is dual-port so each can charge two vehicles at once. They both have two 18-foot-long, self-retracting cords and Society of Automotive Engineers (SAE) J1772 connectors, also known as “J plugs.”

ChargePoint CT4021 stations cost about $7,200 apiece and Duke Energy is funding up to $5,000 per site for equipment and installation through the project. The remainder would be funded by the town.

Each plug of the CT4021 provides 240 volts of charging power. A standard 120V outlet generally takes about 17 to 25 hours to fully charge an EV with a 100-mile range. A 240V outlet can generally make the same charge in four to five hours.

When Duke Energy announced in December 2016 that over 200 public EV charging stations would be funded statewide, it listed four in Wilkesboro. A town official said in 2016 that two of the stations would be along Broad Street, one at Town Hall and one at Cub Creek Park.

Duke Energy pledged the installation of over 200 stations statewide through the project in 2016, but funding for over 500 was requested. The project is part of a 2015 settlement between Duke Energy and the U.S. Environmental Protection Agency and environmental groups.

The Town of North Wilkesboro doesn’t have any free-standing charging stations with retracting cords, but the town has two public 240V wall-mounted outlets and dozens of 120V outlets in its Yadkin Valley Marketplace along the Central Business District Loop that will charge EV vehicles.

The two 240V outlets have National Electric Manufacturers Association (NEMA) 14-50 plugs. One is on the west-end side wall of the market and the other near the middle of the long mural wall across from the men’s bathroom. The 240V outlets were installed in November 2018.

There are also about 48 120V 15-amp wall plugs along the long mural wall and on the 10 columns supporting the covered market area.

The most recent check-in at the North Wilkesboro stations on plugshare.com was made by a Tesla Model 3 owner on July 30. That person wrote, “Successfully used the 240V NEMA 14-50 plug located at the middle of the long wall across from men’s bathroom, got 230V @32A using a Gen2 Tesla Mobile connector.”

McNeill Nissan on U.S. 421 West in Wilkesboro has an EV charging station available only for Nissan LEAF cars during regular business hours, which are 7:30 a.m.-7 p.m. Monday through Friday and 7:30 a.m.-6 p.m. on Saturday, said a company spokesman.

There are 15 NEMA 14-50 charging outlets at Stone Mountain State Park, but it costs $23 to park and charge in one of the reserved Recreational Vehicle (RV) camping spots.

The Stone Mountain campground is open 24/7 but reservations must be made in advance or during normal park business hours, which from May to August are 7 a.m.-9 p.m. Hours are 7 a.m.-8 p.m. in March, April, September and October. From November to February it’s 7 a.m.-6 p.m.

On April 1, Duke Energy said it was making the largest investment in EV infrastructure ever in the Southeast—a $76 million initiative to spur EV adoption across the state.

In a filing with the N.C. Utilities Commission (NCUC), Duke outlined a program that will provide incentives to customers. It would also lead to a statewide network of fast-charging stations to meet growing demand, the company said. The three-year program requires NCUC approval.

Duke said the proposal would help fund the adoption of electric school buses and electric public transportation, and lead to almost 2,500 new charging stations in the state.

North Carolina now has about 600 public charging stations, but Duke says its program would more than double that. North Carolina has over 10,000 plug-in hybrid and all-electric vehicles.

Duke’s EV initiative has faced criticism and opposition from the N.C. Clean Energy Business Alliance and the Public Staff, which maintain that the Duke plan might create a monopoly. They also claim that Duke is essentially asking for advance state approval to bill customers for the program’s cost.

Duke insists otherwise, and that the plan leaves ample growth potential for competitors in the burgeoning EV infrastructure field.

Showers in the evening, then partly cloudy overnight. Low near 35F. Winds light and variable. Chance of rain 70%.