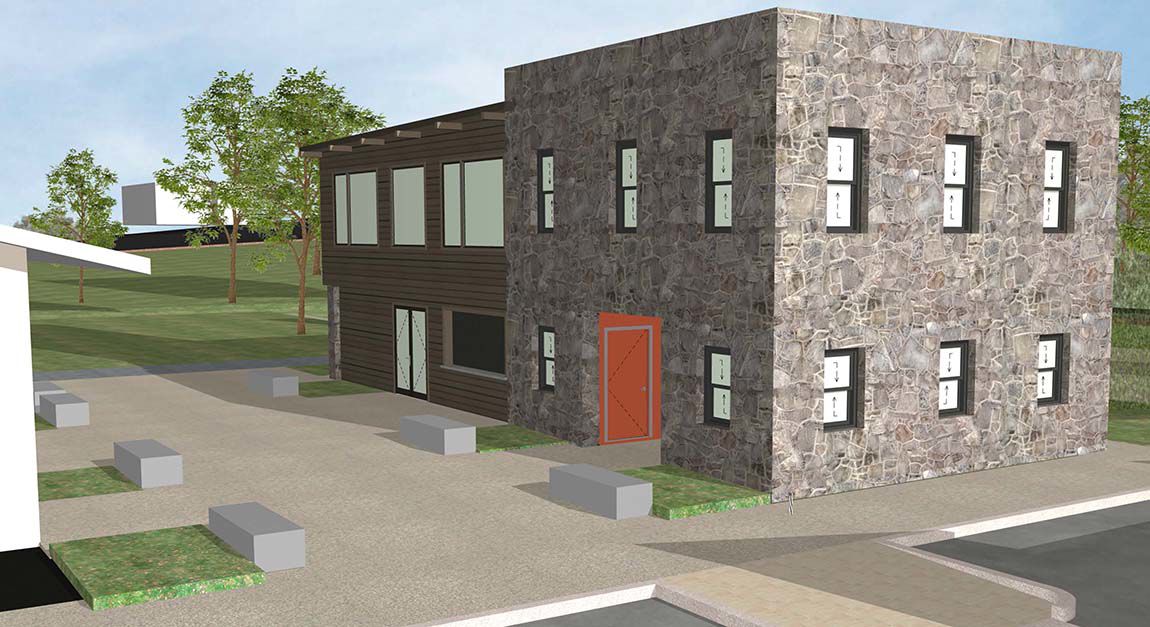 NEW DESIGN of the Rock Building in Wilkesboro features six bathrooms, a wide pedestrian plaza and an upper story for concert artist or retail space, and a viewing room with large windows. 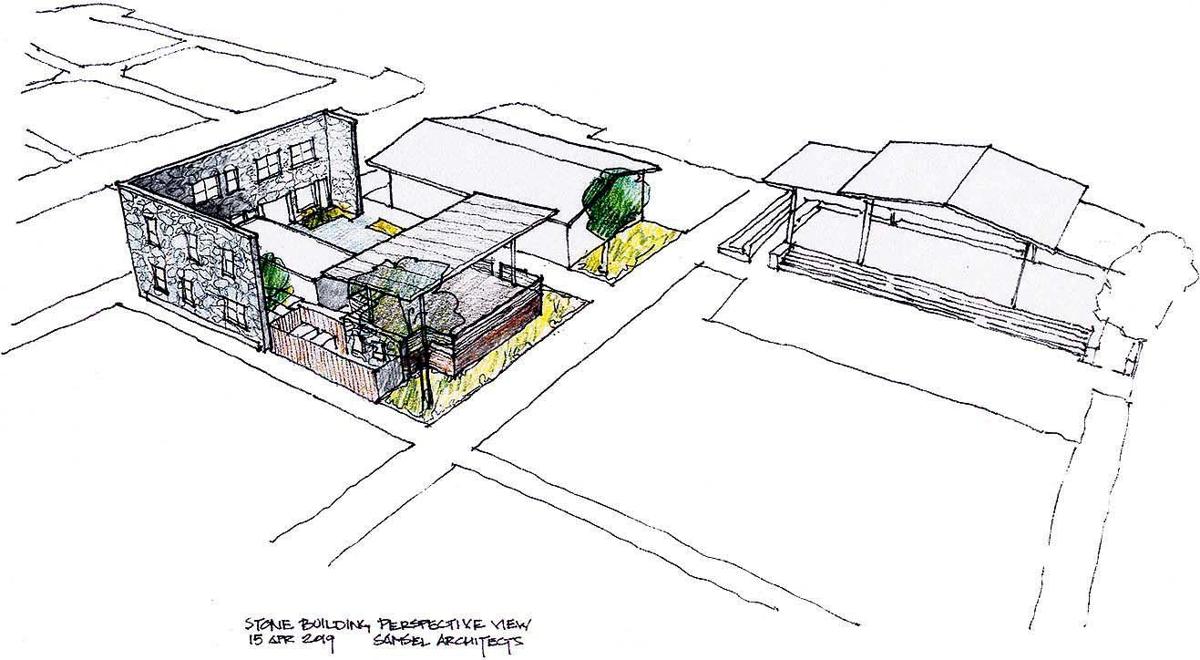 PERSPECTIVE VIEW of one of the three options for the demolition and reconstruction of Wilkesboro’s Rock Building. This design creates four bathrooms and a raised, covered 20-by-25-foot stage.

NEW DESIGN of the Rock Building in Wilkesboro features six bathrooms, a wide pedestrian plaza and an upper story for concert artist or retail space, and a viewing room with large windows.

PERSPECTIVE VIEW of one of the three options for the demolition and reconstruction of Wilkesboro’s Rock Building. This design creates four bathrooms and a raised, covered 20-by-25-foot stage.

Two new designs for tearing down and rebuilding the Town of Wilkesboro’s “Rock Building” along North Bridge Street were presented to the Wilkesboro Town Council during a work session Monday evening.

Wise said it does this by replacing the Rock Building with a 1,200-square-foot, one-story building that allows creation of an almost 19-foot-wide pedestrian plaza between it and the old J.W. Canter service station building. He said this plaza would connect with the existing walkway across North Bridge Street.

This one-story building would be significantly narrower than the Rock Building. It would have a traditional roof, six unisex, handicapped-accessible and family-friendly bathrooms and an area for concessions, storage and janitorial supplies.

“This idea is a wide, open plaza that connects the museum space directly back to the Commons,” said Wise. “What we really love about this idea is the connections, whereas right now the stone building is completely blocking all of this.”

Wise’s other new design, referred to in the meeting as the “all in” model, adds a 1,500-square-foot upper level to the proposed new 1,200-square-foot, one-story building. This would allow for two more restrooms, a large multi-use space for concert artists or retail and a room with large windows overlooking the Carolina West Wireless Community Commons.

Andrew Carlton, Wilkesboro’s director of planning and community development, said the two-story concept would encompass all of the directives given by the council and the Main Street America group. “The number-one goal, from the beginning, was to provide public restrooms in the downtown that would service our facilities and public spaces,” said Carlton.

Wise said the town’s third option is the same one he presented to the council in May: a single-story open pedestrian plaza and four restrooms, all contained inside an L-shaped stone façade. That plaza wouldn’t have a traditional roof and would retain the width of the current Rock Building.

This third option features a raised 20-by-25-foot platform/stage with canopy. Wise called this concept “kind of bare bones, where we basically rebuild the stone façade after taking everything down. We felt this program was a little bit minimal for what you guys were looking for, and we still weren’t getting this connection between the Wilkes Heritage Museum and the Commons area.”

Bob Urness, Wilkesboro’s finance director and assistant town manager, presented preliminary costs for each option. He said that while the two-story, narrower structure might appear to be the most expensive to build—potentially $600,000 to $700,000—it could be the least expensive overall after factoring in up to $100,000 in project funding expected from the Wilkesboro Tourism Development Authority (TDA) and up to $125,000 in building materials anticipated as a donation from one or more local firms.

Only $25,000 is expected from the TDA and none of the in-kind building materials are anticipated to be donated if either of the single-floor concepts are chosen.

Urness said the cost of the two-story facility might fall between $120,000 and $190,000, with the town breaking even on this between fiscal years 2025 and 2028 since having the second-floor rooms would result in the town no longer having to rent space elsewhere.

Urness said his cost estimates for all three plans factor in having town personnel do about 30% of the construction, getting $50,000 to $90,000 in state grants and additional funding through selling naming rights to the building and/or plaza.

Town Manager Ken Noland said in October that the town couldn’t find contractors interested in salvaging the rocks in the existing building when it’s torn down and re-using them in the new structure because this would be delicate and time-consuming work.

Wise and Paul Fama, a structural engineer, concurred in May that the Rock Building is unsafe and should be razed and rebuilt with a new structure.

Carlton noted Monday, “We had to step back and ‘punt’ when we figured out we couldn’t save the rock building, so we had to start the design process over. Right now, we’re simply in the schematic design, which is really just the scheme and theme, trying to figure out what the group wants programmed into the building.”

For more than a year, town officials have been discussing an extensive renovation of the Rock Building in support of concerts and other activities at the Commons and nearby Wilkes Heritage Museum.

Extensive water damage to the interior wood framing of the building prompted new plans in March for renovating the structure and pushed back its opening to 2020. Now, the town is discussing a potential opening in 2021.

Noland added that demolition of the current Rock Building could begin soon and, once started, result in a clean site in six to eight weeks.

The building was constructed around 1935, which was before there was a town building code. The town bought it in 2016 for $225,000. “There were a lot of things that happened to this building historically that we weren’t aware of when we purchased it,” said Carlton earlier.

Noland told the council on Monday, “We’re not asking you to make any decisions tonight. We’re just trying to get it all out there so we can start soaking it in. We’re presenting numbers that show you how it could work, and not put pressure on our budget, because I know we don’t want tax increases or dipping into your reserves. But we also don’t want to short change ourselves because we don’t think we can afford it.”

The Rock Building project will essentially be the final step in phase one of Wilkesboro’s downtown revitalization, which began in 2017. This phase has centered on the Carolina West Wireless Community Commons and Wilkes Communications Pavilion and cost the town upwards of $2 million, with about $750,000 recouped through naming rights.

Phase two is next

Urness briefly discussed the first steps the town would likely take in phase two of the downtown revitalization. He said it generally would involve removal of above-ground utility lines, constructing general curbing and intersection pedestrian “bulb-outs” and expanding public parking near the Stroud-Miller Insurance building and elsewhere near downtown streets parallel to Main Street.

He said funding for the roughly $4 million phase would likely come from a 40-year, low-interest (3% fixed rate) loan from the U.S. Department of Agriculture. “From a financing concept, the USDA option seems to be a great fit.”

Urness said it should take 15-18 to months create the construction document for phase two, followed by a design period that could take up to two years.

“The document construction contract and pursuit of the loan are available to us today, but we are looking to the spring time as we will be past the election and have the opportunity to involve the (council) in a retreat. The time will allow for staff to further investigate and answer questions that are currently outstanding,” he added.

Oh,by the way who's payin for this ? If it's taxpayers, I should not be the only one madasheck.

Partly cloudy skies during the evening will give way to cloudy skies overnight. Low 34F. Winds light and variable.

Showers early, becoming a steady rain late. Low 38F. Winds light and variable. Chance of rain 80%. Rainfall near a quarter of an inch.