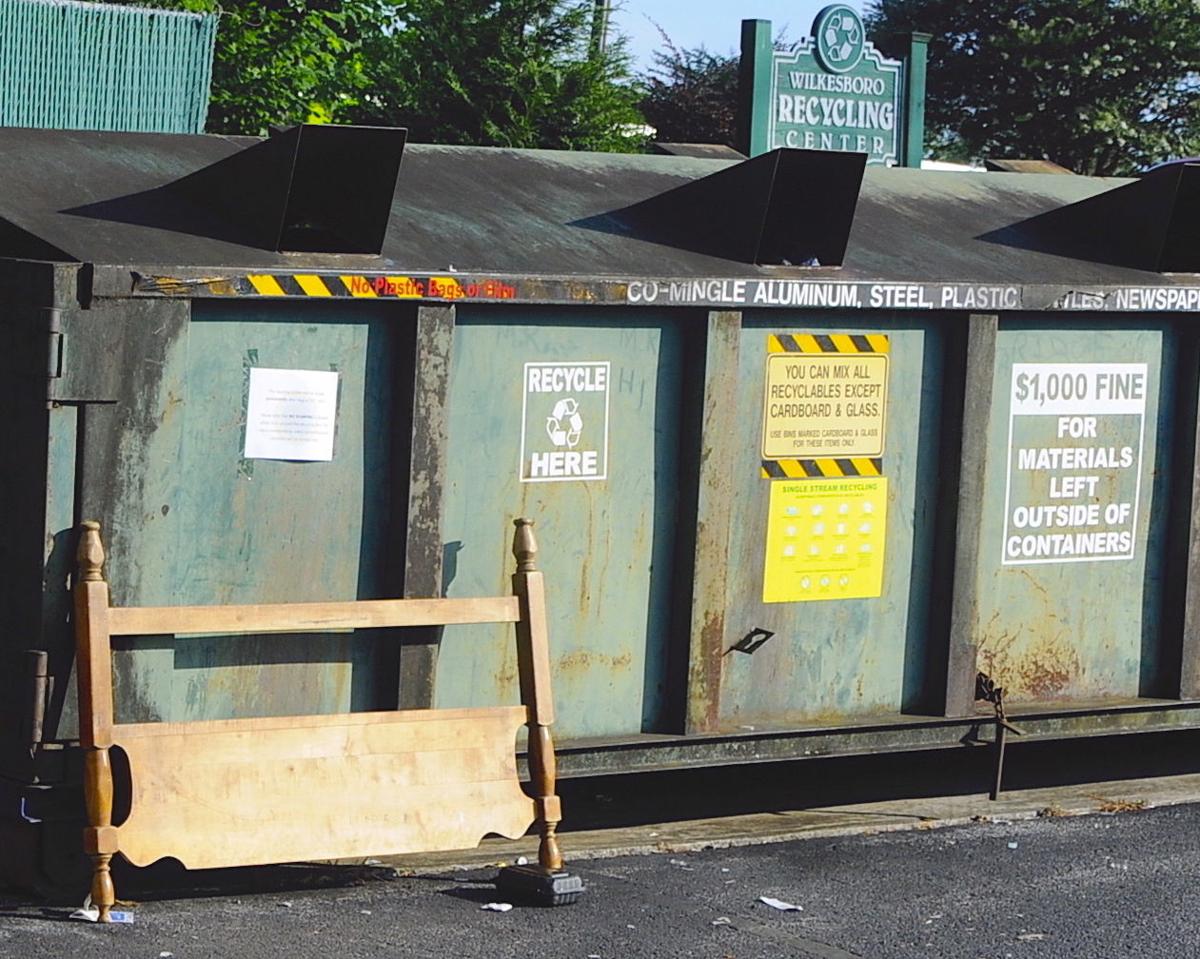 Friday afternoon, a headboard had been left against the front of a recycling bin at the Town of Wilkesboro’s recycling center on School Street. 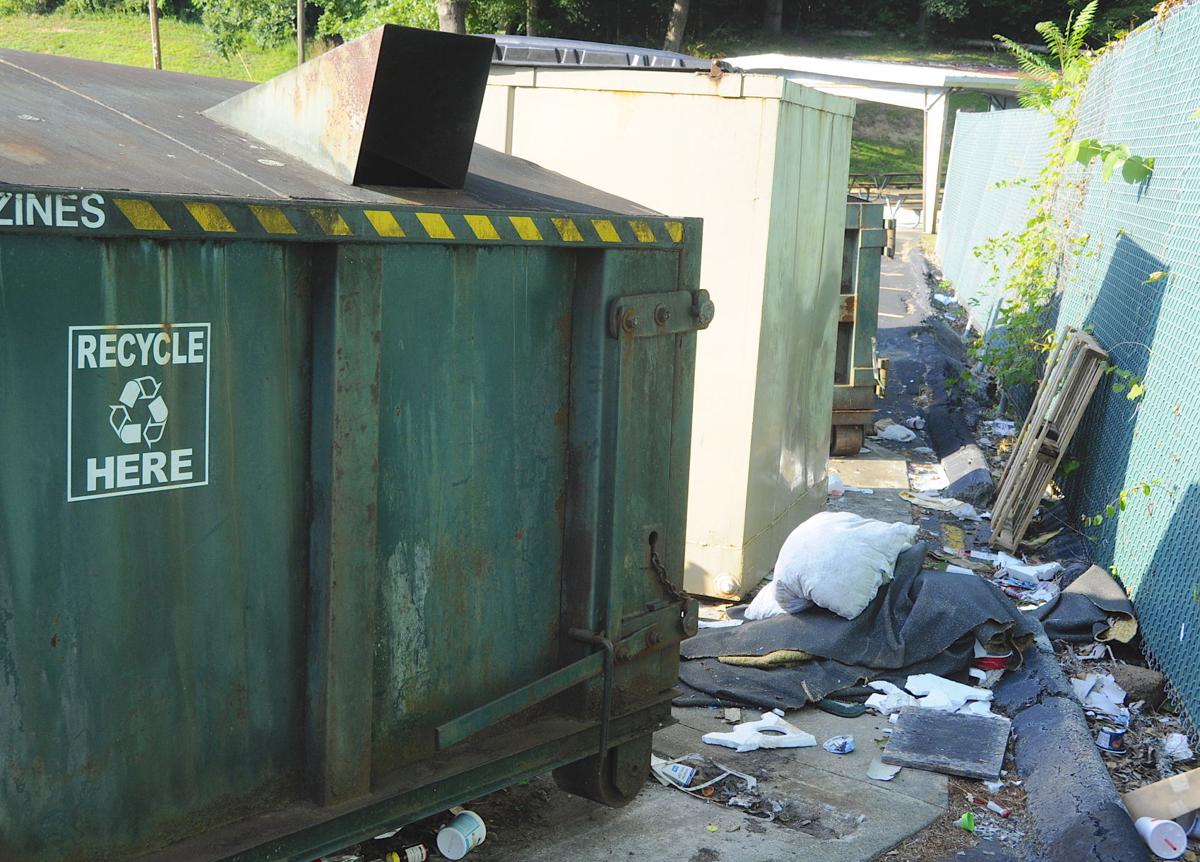 Pillows, blankets, pieces of cardboard, wooden pallets and other non-recyclables have been dumped behind the recycling bins in the Wilkesboro Civic Center parking lot on School Street.

Friday afternoon, a headboard had been left against the front of a recycling bin at the Town of Wilkesboro’s recycling center on School Street.

Pillows, blankets, pieces of cardboard, wooden pallets and other non-recyclables have been dumped behind the recycling bins in the Wilkesboro Civic Center parking lot on School Street.

Wilkesboro’s recycling centers on School Street and in Cub Creek Park will be permanently closed after Aug. 31 due to people using them to dispose of non-recyclables, said Town Manager Ken Noland.

The Town of North Wilkesboro’s only recycling center was closed June 1 for the same reason. It was in a far end of the Memorial Park behind the North Wilkesboro ABC Store.

Noland said people are using the two Wilkesboro sites to dispose of whatever non-recyclable products and materials they can fit through openings of bins and piling up larger items behind the bins.

Friday afternoon, pillows, blankets, carpet, wooden pallets and other non-recyclables were piled up behind two rows of bins at the recycling center in the Wilkesboro Civic Center parking lot on School Street.

A sign on the front of one of the bins announced the permanent closure of the site after Aug. 31. It also said no dumping is allowed in or around the recycling bins and warned that the “site is under video surveillance and violators will be prosecuted.”

Despite this warning, a wooden headboard was leaning against the same bin, immediately below the sign.

The situation was similar at North Wilkesboro’s recycling center behind the town’s ABC store.

Hooper said closure of the North Wilkesboro facility resulted from numerous complaints from town citizens about its unsightliness “and confirmed reports of regular trash being placed in the containers…. Individuals were also using the facility to dump large furniture and appliances.”

Both towns offer their residents and businesses curbside pickup of recyclables and provide containers for this.

With that in mind, said Noland, “we’re serving people outside town with the recycling centers.” He noted that a town recycling center at an apartment complex off Woodfield Way is remaining open because is isn’t feasible to collect recyclables from individual apartment units there.

Wilkesboro and North Wilkesboro residents and businesses both pay their respective towns $10 per month for weekly curbside pickup of garbage and recyclables in rollout containers provided by the towns. Businesses can opt to pay more and also get dumpsters for solid waste collected by town personnel.

Residents and businesses don’t have to separate their recyclables for collection by town personnel, but it’s $10 per month either way.

Noland and Hooper said their town governments have had to pay North Wilkesboro-based Foothills Sanitation & Recycling for recyclables town personnel collect and take to Foothills since a trade war with China in the Trump administration caused the loss of the Chinese recyclables market.

Since May 2019, both towns have paid Foothills $30 per ton of recyclables.

Foreign trade issues are among multiple factors that make demand and prices for recyclables highly volatile.

Husband and wife Jeff and Janet Miller of Wilkes have owned and operated Foothills since starting it in the mid-1990s.

The letter also said, “On matters related to service scheduling, pricing, contracts and partnerships, all operations will remain business as usual.” It said GFL is the fourth largest diversified environmental services company in North America.

Hooper said Monday that he wasn’t aware of a change in ownership of Foothills and noted that the town recently renewed a contract with Foothills with the $30 per ton fee for recyclables.

Noland and Hooper both said that with the Wilkes County Landfill charging their respective towns $43 per ton for solid waste dumped there and with disposal of recyclables costing them $30 per ton, it’s still cheaper to have as much of their waste flow as possible recycled.

Not charging residents or businesses extra for picking up recyclables and then having to pay to dispose of them means these costs are covered by tax dollars, said Hooper.

He said this use of tax dollars is offset by the fact that diverting recyclables from the landfill reduces additional landfill space county government must fund and helps keep landfill “tipping” (dumping) fees down for the town.

“We do not anticipate any changes in the foreseeable future” as a result of the change in ownership, said Byrd. “I believe they (GFL) will be a positive presence.” She said she was told GFL plans to expand the recycling portion of the local operation. The facilities of Foothills are on Boone Trail, North Wilkesboro.

Foothills collects mixed recyclables at county government’s four manned convenience centers, as well as school trash and recyclables at 19 of the 22 Wilkes schools under a contract with the county.

Byrd said that for two years, the county has paid Foothills $33 per ton for recyclables it collects. She said this resulted from a downturn in the recyclables market related to the trade war with China, which she said caused some municipal governments elsewhere to end recycling programs.

“It’s still more beneficial for Wilkes to recycle as much as possible rather than consume valuable landfill space,” she added.

Byrd said these totals don’t include cardboard because Foothills can still make a profit collecting and selling cardboard without charging a collection fee.

She said county government doesn’t have problems with non-recyclables being left in or near recycling bins at the four manned county convenience centers, nor is it a problem at the county’s unmanned convenience center near Crossfire United Methodist Church on N.C. 115

Among the school sites, she said, it’s mainly a problem at Mulberry-Fairplains and Millers Creek elementary schools due to the distance of containers from school buildings there.

There is at least one company in Wilkes that picks up mixed recyclables from homes outside the Wilkesboros for a monthly fee.