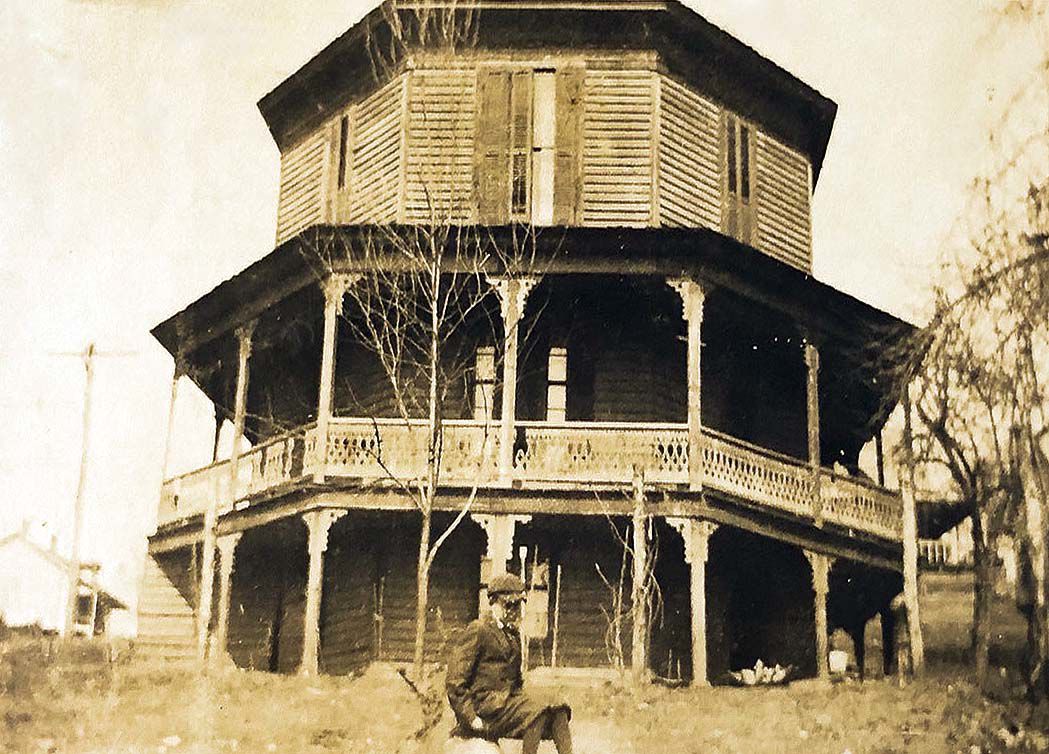 Reuben Caudill moved his family into an eight-sided house on Sixth Street hill in North Wilkesboro in the 1910s after selling their log home and farm in the Dockery community. Osco V. (O.V.) Caudill, one of Reuben Caudill’s seven children, left the home a few years later to embark on a career as a minister. 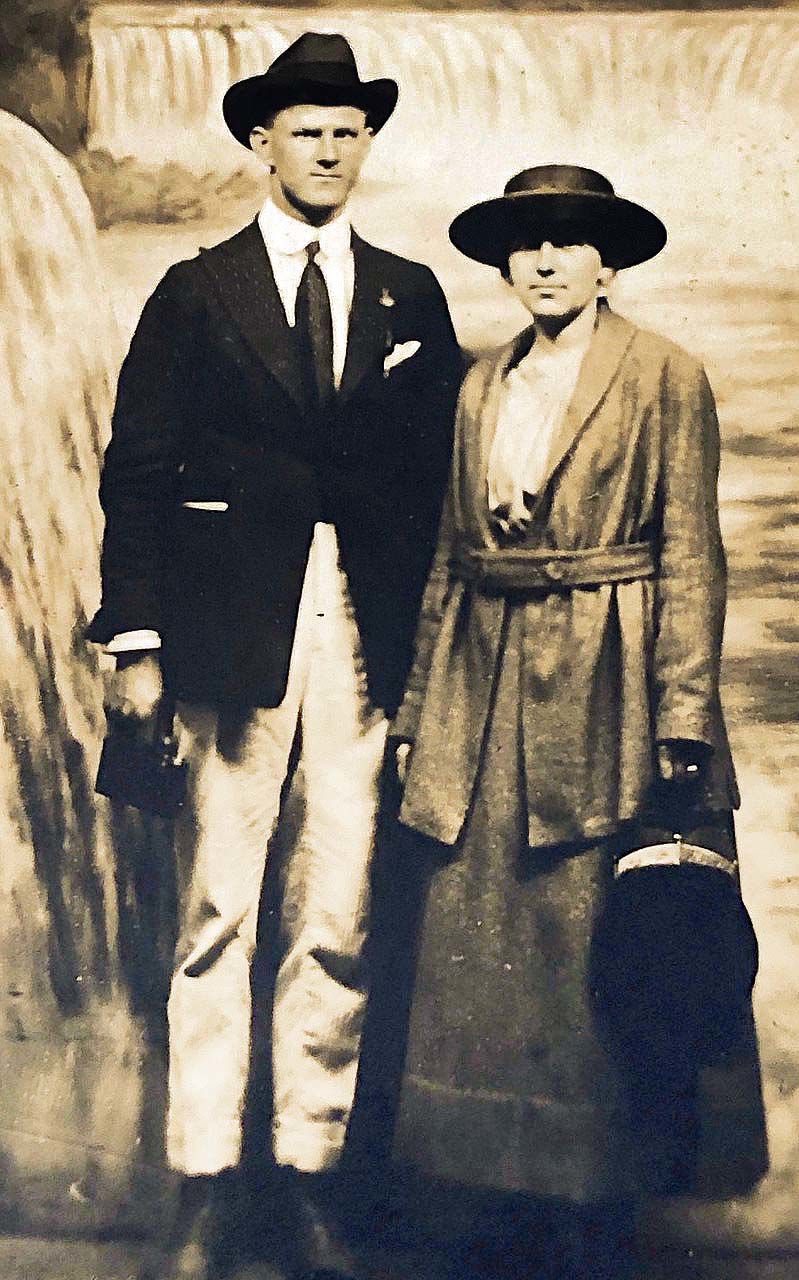 O.V. and Rachel Boyle Caudill met while Caudill was a student at a boarding school started by evangelist Dwight Moody in Massachusetts. She lived near the school. 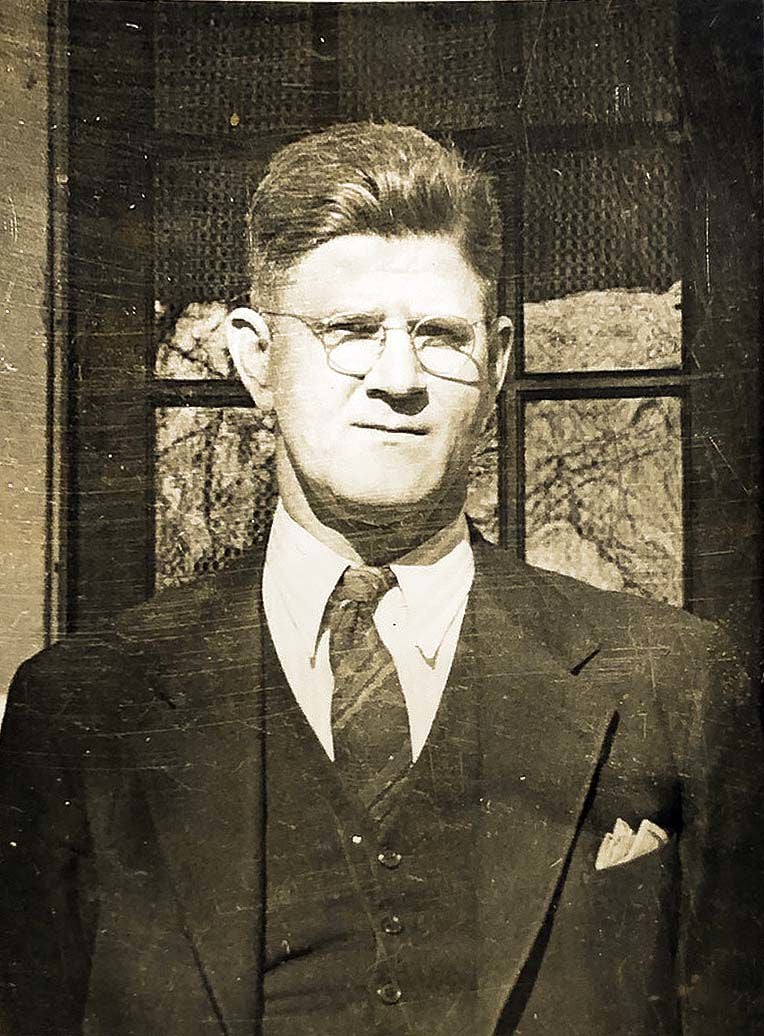 O.V. Caudill, descended from generations of Baptist preachers, was known for the Presbyterian churches he built. 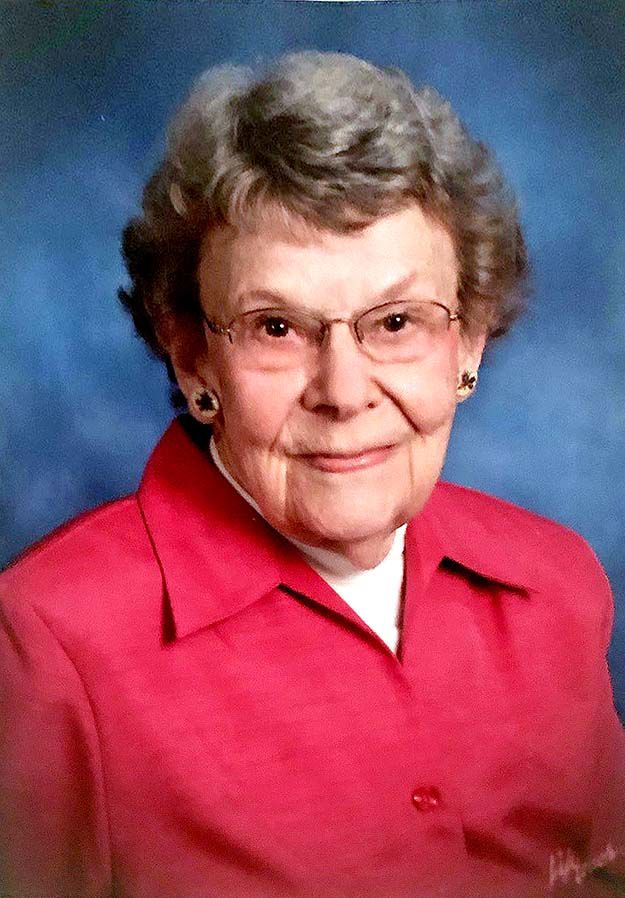 Reuben Caudill moved his family into an eight-sided house on Sixth Street hill in North Wilkesboro in the 1910s after selling their log home and farm in the Dockery community. Osco V. (O.V.) Caudill, one of Reuben Caudill’s seven children, left the home a few years later to embark on a career as a minister.

O.V. and Rachel Boyle Caudill met while Caudill was a student at a boarding school started by evangelist Dwight Moody in Massachusetts. She lived near the school.

Sometime in the 1910s, a horse-drawn procession of four heavily-laden wagons and a surrey drew attention as it rolled into downtown North Wilkesboro and turned right from Main Street onto Sixth Street.

Reuben and Nancy Roberts Caudill, their seven children and Nancy’s mother, Emily Bryan Roberts, had moved to town. Bringing up the rear on foot were the two oldest sons, Carl and Osco V. (O.V.) Caudill, each leading a cow.

Reuben Caudill had sold their log home place and farm in the Dockery community (now Hays) and had purchased a unique home about halfway up Sixth Street Hill.

In his written description of the family’s move many years later, Carl Caudill described it as “a pretentious house built in the shape of an octagon.” He called it “the round house.”

Margaret Barranger Reid of Raleigh, a granddaughter of O.V. Caudill, recently donated a copy of Carl Caudill’s account of the move to North Wilkesboro and a drawing of the octagon house to the Wilkes Heritage Museum. Reid said she made the donation at the request of her mother, Helen Caudill Barranger, 98, of Raleigh.

Marilyn Payne, museum board member, is trying to learn more about the unusually-shaped home, including who built it and who owned it after the Caudills. Anyone with information on Sixth Street’s “round house” can send it to Payne at mpaynewhm@yahoo.com or call the museum at 336-667-3171.

There was a surge of interest in octagon houses in the last half of the 1800s, largely due to Orson Fowler’s 1848 book, “The Octagon House: A Home for All.” Eight-sided houses were touted for their efficient use of space, energy and funds. Most had at least two stories, wrap-around porches and flat roofs.

Helen Barranger said the Caudill children were known for forming a chorus and singing hymns for neighbors from the porch of the octagon house during the 1918-19 flu pandemic.

Her father, O.V. Caudill, had left Wilkes by then to attend evangelist Dwight Moody’s Mount Hermon School for Young Men in Gill, Mass. Students worked for their room and board there.

Barranger said this move resulted from her father meeting evangelist Dr. Mordecai Ham and impressing the Kentucky preacher with his potential. They met when Caudill was handing out Christian tracts for a revival held by Ham in North Wilkesboro.

(Another teenager’s life was changed at a Mordecai Ham revival in Charlotte in 1934. The story of Billy Graham’s conversion to Christianity at age 16 as a result of hearing Ham preach is well documented.)

Caudill was from a family of generations of Baptist preachers and the move to Mount Hermon School started him on a path to continue that tradition. His father owned a lumber mill in North Wilkesboro and preached on the side.

Moody arranged for Caudill to enroll in Moody Bible Institute in Chicago after he graduated from Mount Hermon School in 1919. In 1920, Caudill married Rachel Boyle of Gill, Mass. They were married for 56 years and met while he was at Mount Hermon.

After finishing at Moody Bible Institute, Caudill became a Baptist missionary and moved with his young bride to southwestern West Virginia to start Sunday school classes.

While there, he worked with a Presbyterian minister with last name Wilson from Marion, Va. Barranger said Wilson convinced her father to enroll at Richmond Theological Seminary, a Presbyterian institution. She was 2 at the time.

“They gave him a case extraordinaire (degree) after just one year” and Caudill became a Presbyterian minister, said Barranger. “My grandfather said he would never set foot in his son’s house and he never did” because of two things her father did. “He married a Yankee and he left the Baptist church.”

She added, “My father said that when he visited his father on his deathbed, he thought he wanted to forgive him,” but he still didn’t.

From Richmond, Caudill and his family moved to Whitesburg, Ky., where he served as minister of Graham Memorial Presbyterian for many years. He led construction of the church, named for Mary Graham of Mason, Va., after she endowed funds for its completion during the Depression.

Caudill had developed construction skills through his father’s ownership of a lumber mill. By the time the family left Whitesburg, Barranger was 17 and had a sister.

Caudill subsequently served as pastor of Presbyterian churches in West Jefferson, Elkin, Max Meadows, Va., and elsewhere before he was named superintendent of home missions for the Winston-Salem-based Salem Presbytery, a role that included overseeing construction of churches and church additions in a multi-county area of North Carolina.

Barranger married Glynn Davies Barranger in 1941. He died in 2012, and her sister, Rachel Caudill Phillips, died in November 2019. She was five years younger than Barranger.

She has another daughter, Glenna Keller of Wilmington, in addition to Margaret Reid. She also has four grandchildren and five great-grandchildren.

Barranger wrote for Blue Ridge Country magazine for several years and did other freelance writing. She was a church librarian, chaired a chapter of American Association of University Women and was on the Board of Trustees of Roanoke College.

She was involved in ecological efforts and was founder and director of the Clean Valley Campaign in Southwest Virginia. She was active in other educational programs for the disadvantaged, including as a volunteer tutor.

In 1981, Barranger was presented the Roanoke College Medal for her service and professional achievements.

She graduated from Marion College in Marion, Va., in 1941 and from Roanoke College in Salem, Va., in 1967. Barranger was editor of Marion’s alumni newspaper, The Marion Ideal, for 10 years.