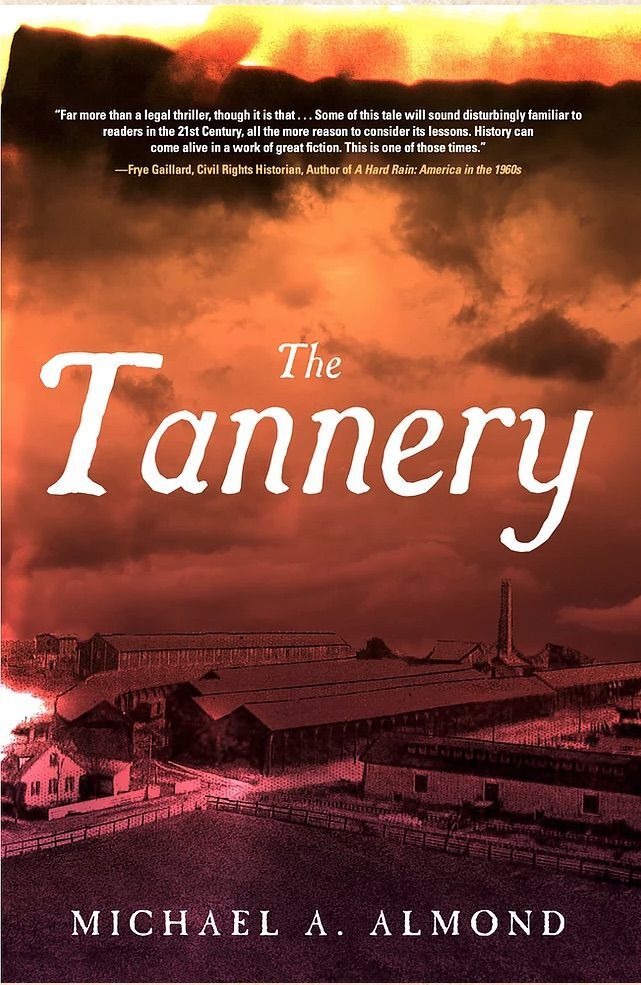 Michael A. Almond’s debut historical fiction novel, “The Tannery,” is set in Wilkes County in a three-month period in 1900. It’s being released this month. 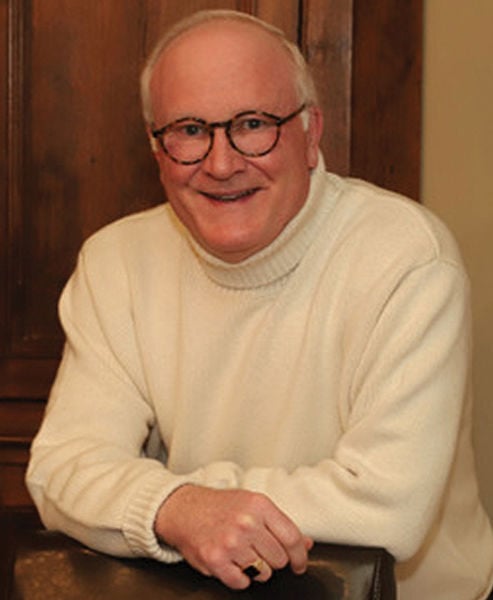 Michael A. Almond said his goal with “The Tannery” was to write a meticulously researched murder-mystery that entertains while raising both historical and contemporary lessons about racial justice.

A postcard image of the C.C. Smoot and Sons Tannery in North Wilkesboro before the 1916 flood is on the front cover of Michael A. Almond’s debut novel. The operation was the basis for the tannery in the book. Smoot Park now occupies the left half of this view. 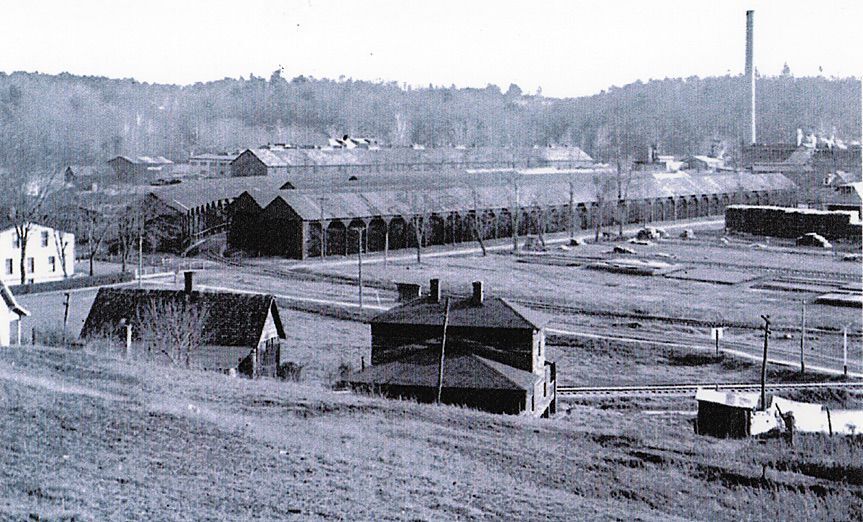 C.C. Smoot and Sons Tannery is shown at some point after the 1916 flood. This leather tannery opened in 1897 and closed after the devastation of the 1940 flood. The smokestack, right, appears to be taller than in the post card image.

Michael A. Almond’s debut historical fiction novel, “The Tannery,” is set in Wilkes County in a three-month period in 1900. It’s being released this month.

Michael A. Almond said his goal with “The Tannery” was to write a meticulously researched murder-mystery that entertains while raising both historical and contemporary lessons about racial justice.

A postcard image of the C.C. Smoot and Sons Tannery in North Wilkesboro before the 1916 flood is on the front cover of Michael A. Almond’s debut novel. The operation was the basis for the tannery in the book. Smoot Park now occupies the left half of this view.

C.C. Smoot and Sons Tannery is shown at some point after the 1916 flood. This leather tannery opened in 1897 and closed after the devastation of the 1940 flood. The smokestack, right, appears to be taller than in the post card image.

A new historical fiction novel, to be released this month, takes readers on a quest for justice in post-reconstruction Wilkes County.

Retired attorney Michael A. Almond’s debut novel, “The Tannery, is a legal thriller set in a three-month period in 1900.

It’s about a mixed-race boy named Virgil Wade facing a relentless prosecutor who is determined to convict and hang Wade for the murder of the beautiful daughter of the wealthy owner of the leather tannery in North Wilkesboro.

Local defense lawyer Ben Waterman’s investigation uncovers evidence that undermines the prosecutor’s case, but he must convince an all-White, all-male jury that Wade is innocent.

Almond said in an interview that his goal was to write a meticulously researched murder-mystery that entertains while raising both historical and contemporary lessons about racial justice. The novel, received with glowing reviews, reflects civil rights issues prominent in today’s headlines.

Almond is a voracious reader and historical fiction is among his favorite genres. “Somewhere along the way, as I was reading these books, I began thinking maybe there’s a book in me.” He knew he wanted to write a legal thriller and those generally involve a murder case.

Explaining how he chose the setting, Almond said he developed an affinity for Wilkes from coming to North Wilkesboro every few months with his grandfather when he made deliveries here for his business. Almond grew up in Pilot Mountain.

“We would always drive by the tannery ruins and see the Jenkins Wholesale smokestack (originally part of the C.C. Smoot and Sons Tannery) and I would wonder what that is all about.”

He added, “Where can you find a richer vein of compelling history than Wilkes County. You’ve got Daniel Boone, Col. Ben Cleveland and the march to the Battle Kings Mountain, the Tory Oak, Fort Hamby gang, Tom Dooley, Siamese Twins, railroad and growth of North Wilkesboro, moonshine and NASCAR and the largest steam-powered tannery in the Southeast….

“I also learned that as late as the 1970s, Wilkes had the headquarters of more Fortune 500 companies than any other place in the nation.”

He continued, “And what more interesting time was there than 1900…. Wilkesboro had for decades been called the ‘lost province’ because it was so isolated and cut off, with the roads so bad. But when the train came, things began to change and they changed rapidly….

“I was very surprised to find out that in 1900, (North) Wilkesboro had a telegraph system, telephone system and electric lights.”

Almond said he believes readers of historical fiction, like himself, want to learn things they didn’t know. He said they also want to know where reality ends and fiction begins in a novel, so it’s important to achieve a balance between the two.

“What I was trying to accomplish was to weave into the story the historical authenticity and context. This is the challenge of all historical fiction. What was going on that made this case important? That leads you straight to post-reconstruction racial and social conditions in North Carolina, including White supremacy campaigns of 1898 and 1900 that were engineered and masterminded by Charles B. Aycock, Josephus Daniels” and others.

While he was generally aware of these aspects of history, “the deeper I got, the more appalled I was at what was going on.”

He said White Democrats in control of the N.C. legislature wanted to instill fear and hatred of rich and poor Black people and remove them from the voting process.

Almond said that when he began his 13 years of sporadic research for the novel, he had no idea the lessons of White supremacy campaigns in 1898 and 1900 would prove to be so relevant to contemporary times.

A mixture of real people in 1900 and others who are products of Almond’s imagination interact with each other in “The Tannery.” He said all of the main characters are fictional and aren’t based on real people. The murder of the tannery owner’s daughter isn’t based on anything that actually happened.

The tannery that Almond describes in the novel is based on the C.C. Smoot & Sons Tannery in North Wilkesboro, which used tannin from the bark of chestnut oak and American chestnut to make shoe leather from cowhides. It was the county’s largest employer many of the years it operated, from 1897 until it was crippled by the 1940 flood and soon closed.

In “Historical Notes” at the end of the book, Almond tells which of the characters and places in the novel were real.

They include William F. Trogdon, one of the primary developers of North Wilkesboro; Furnifold M. Simmons, chairman of the N.C. Democratic Party; and Colonel Wade, leader of a gang of bushwhackers that terrorized the Wilkes area immediately after the Civil War from a headquarters (called “Fort Hamby” west of Wilkesboro.

Historical fiction gave Almond the liberty of fabricating certain things like including a county courthouse that actually wasn’t constructed until 1902.

“The Tannery” includes the true story of a key event that led to establishment of North Wilkesboro in the 1890s. Wilkes County voters had approved issuance of $100,000 in bonds to help extend railroad tracks from the east to a mile of the courthouse in Wilkesboro. The tracks stopped within a mile of the courthouse as agreed, but on the north side of the river instead of the south side where the courthouse is located. A town grew up, with help from Trogdon and others, where train tracks stopped.

In April 2020, Almond announced to his wife, Helen Ruth Almond, that he had finished a 12-page outline on the book.

He said she responded, “Me and all of your friends are sick of hearing you talk, talk, talk about your research, your outline and blah, blah, blah. We’re in the middle of a pandemic and you’ve got no excuse but to go upstairs and write the damn thing or shut up about it.”

Almond said sitting down at a blank computer screen was terrifying because he suddenly realized, “I think I know what I want to do, but I’m not sure I know how to do it.”

The biggest challenge of fiction writing is creating dialogue that seems genuine, he added.

He said Helen Ruth reviewed what he wrote as he went along and he incorporated her suggestions daily, so little rewriting was needed.

The Almonds have a home and farm in Alleghany County, as well as a home in Charlotte.

“The Tannery” is scheduled for release by Köehler Books on Oct. 17, but pre-orders are available now. The Wilkes Heritage Museum will also have copies. For more details, go to https://www.michaelalmondbooks.com/the-tannery.

Almond said he has a tentative sequel in mind called “The Factory,” set in Winston and involving the late industrialist, R.J. Reynolds.

Almond had a career of over 40 years in global business and international economic development, with an emphasis on Germany and Western Europe.

While a partner at Parker Poe Adams & Bernstein LLP in Charlotte, Almond was founder and chairman of the firm’s international business law division. He is a certified commercial arbitration judge for the American Arbitration Association for large, complex commercial disputes.

Almond was president, CEO and board member of the Charlotte Regional Partnership, a non-profit regional North Carolina/South Carolina economic development organization, from 1999-2005.

Almond was a member and chairman of the board of directors of the Charlotte Branch of the Federal Reserve Bank of Richmond. He also has served as a board member of the North Carolina Community College Foundation.