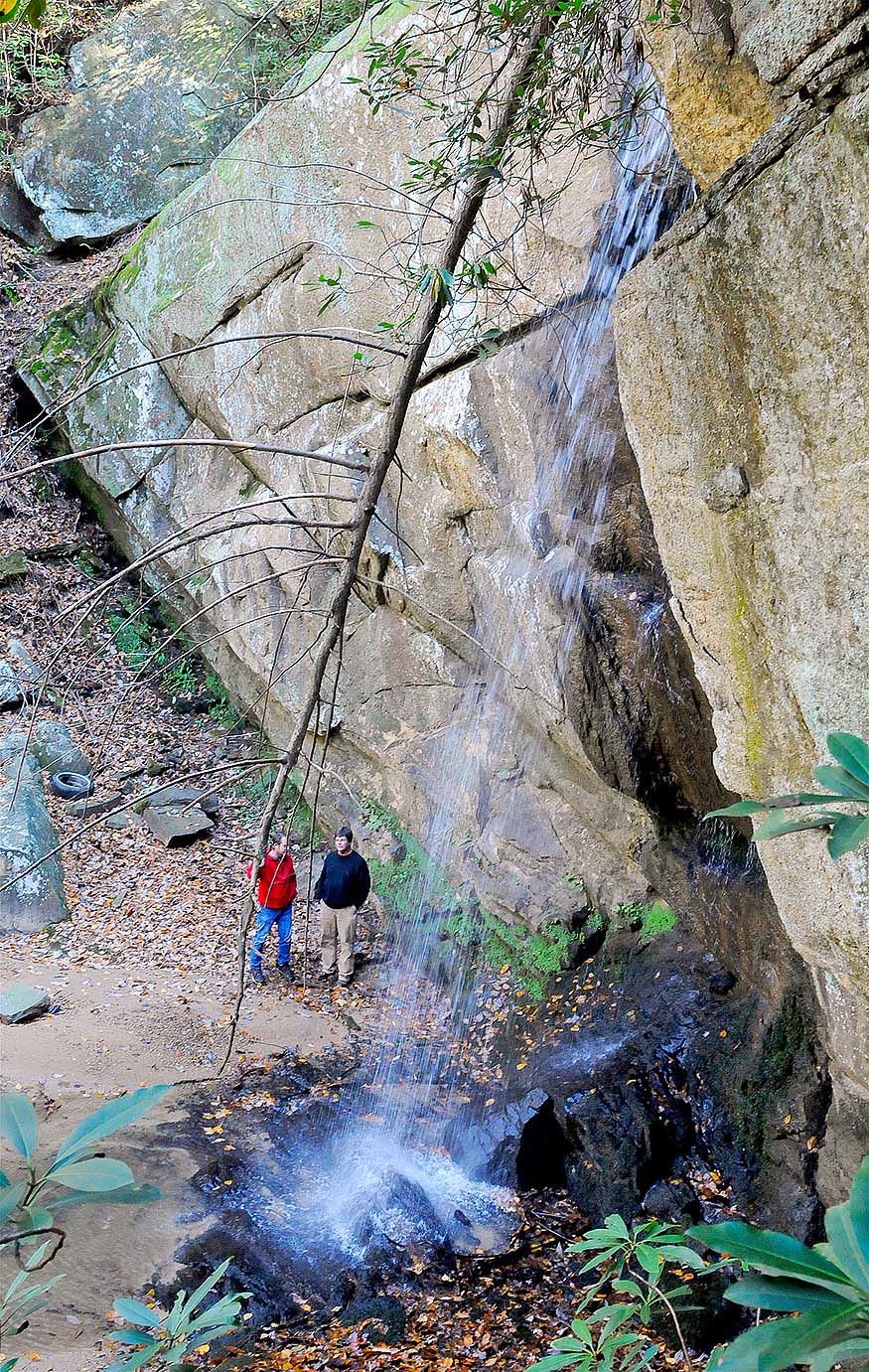 David Wester, left, and Ferguson resident Tony Jones are at Buck Falls, which is in the Ferguson area. Buck Falls is one of over 40 waterfalls in Wilkes County that Wester has visited. 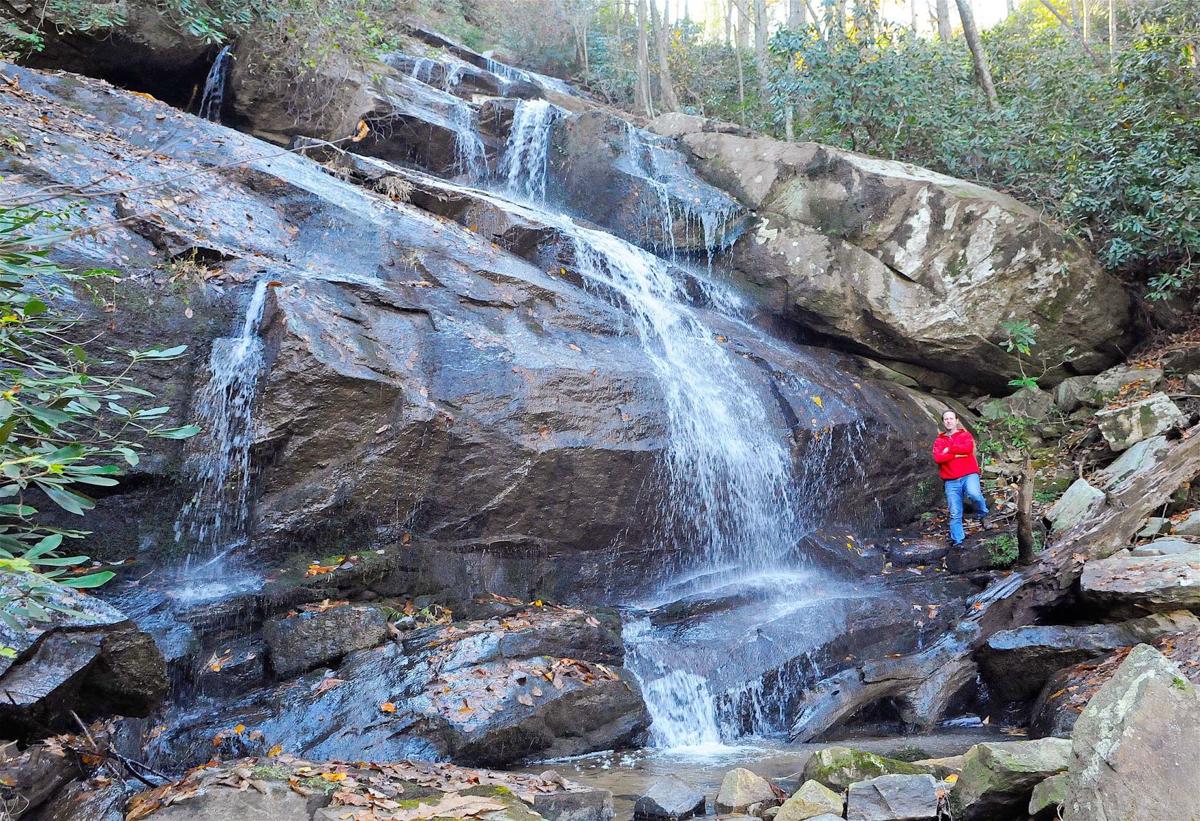 WATERFALL IN WESTERN WILKES, like many in the county, is on private property. The landowner requested that its location not be told. David Wester is in the photo. 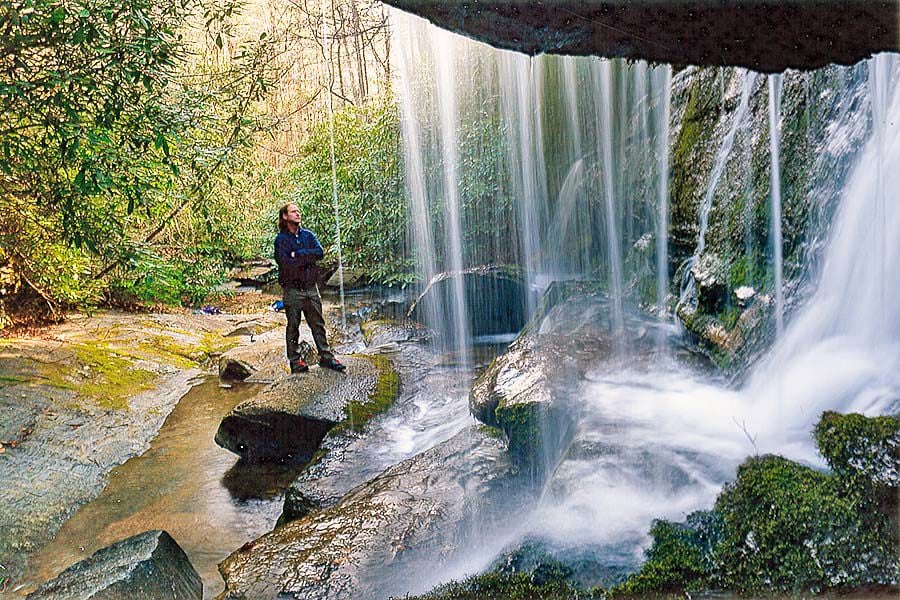 Glen Addie waterfall is among many on the Brushy Mountains that David Wester, in the photo, has visited. 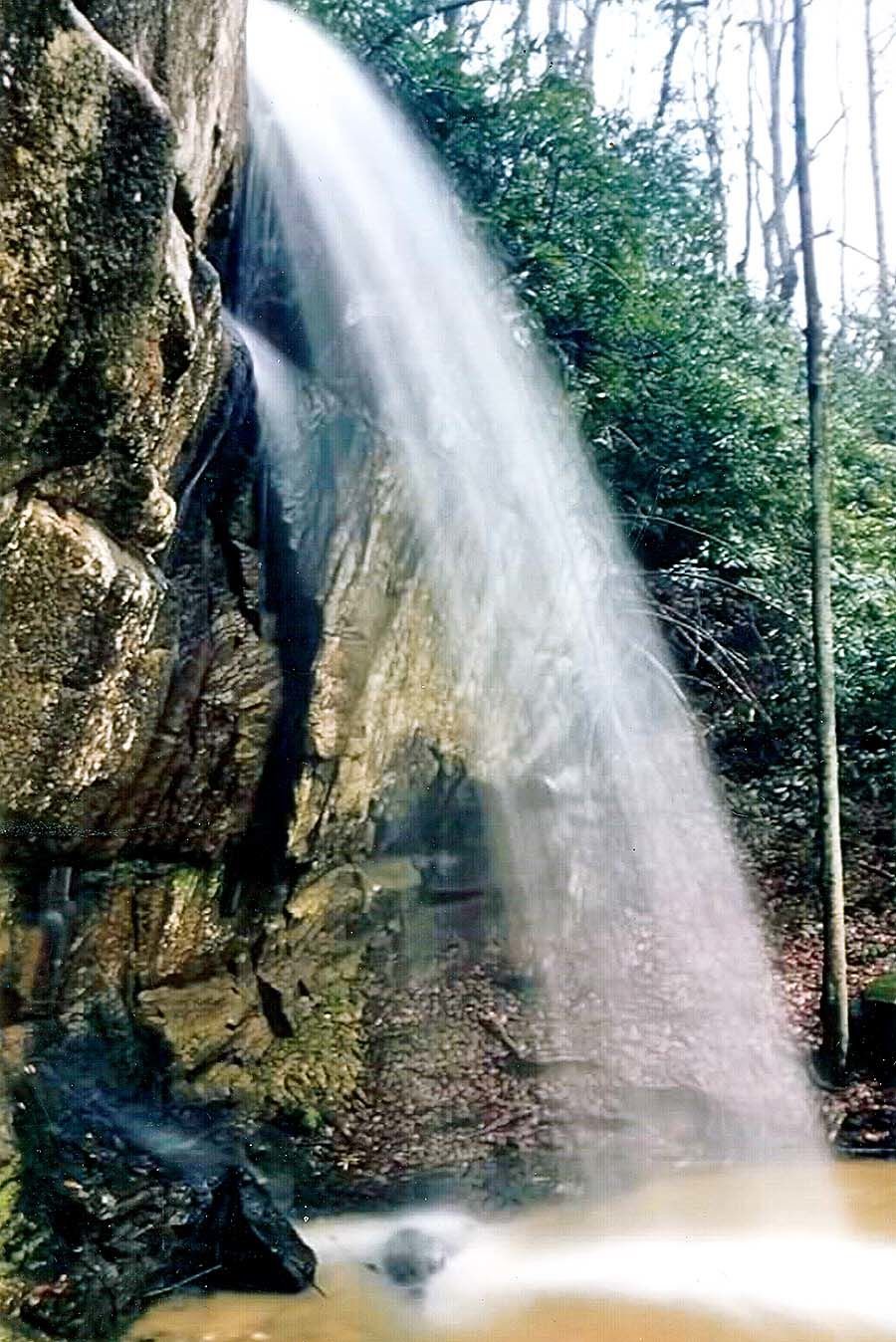 VIEW OF BUCK FALLS in western Wilkes County after a period of substantial rain. 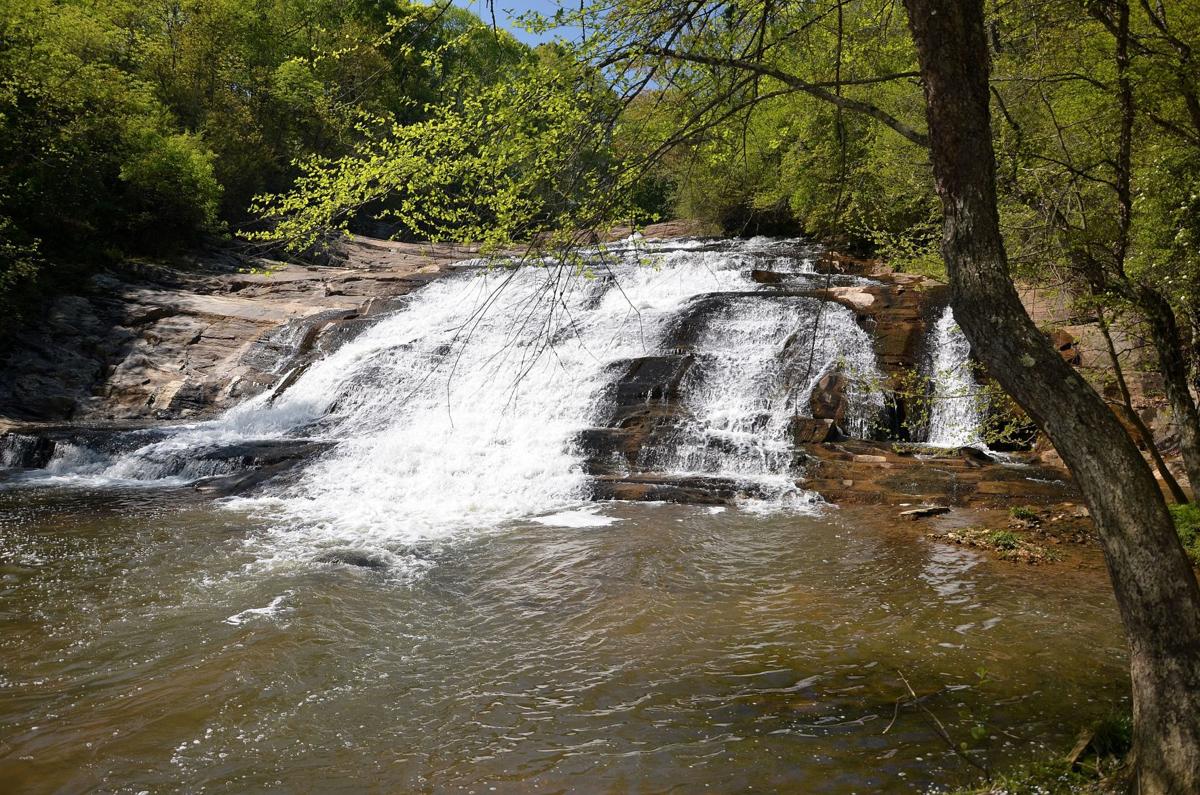 CARTER FALLS is in a park on land owned by Wilkes County government off Carter Mill Road near Elkin. 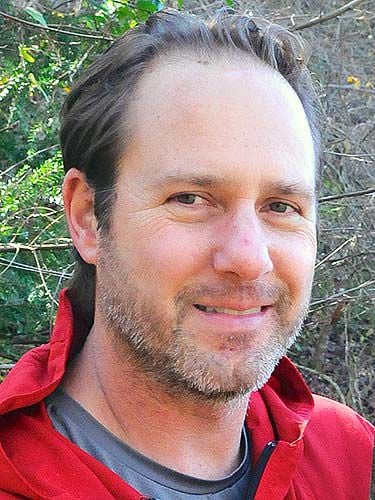 David Wester, left, and Ferguson resident Tony Jones are at Buck Falls, which is in the Ferguson area. Buck Falls is one of over 40 waterfalls in Wilkes County that Wester has visited.

WATERFALL IN WESTERN WILKES, like many in the county, is on private property. The landowner requested that its location not be told. David Wester is in the photo.

Glen Addie waterfall is among many on the Brushy Mountains that David Wester, in the photo, has visited.

VIEW OF BUCK FALLS in western Wilkes County after a period of substantial rain.

CARTER FALLS is in a park on land owned by Wilkes County government off Carter Mill Road near Elkin.

David Wester is a locomotive engineer and runs an Amtrak passenger train from Charlotte to Atlanta and back twice a week at night, but he spends much of his spare time exploring Wilkes County.

The Mooresville resident has “discovered” something about Wilkes that doesn’t get a lot of attention—its waterfalls.

Wester is a “waterfaller,” which is to say he’s one of a growing number of people who enjoy searching out and hiking to waterfalls.

Waterfallers often share their experiences and sometimes organize outings via social media. “North Carolina Waterfalls” and “North Carolina Hiking and Waterfalls,” with over 8,700 and over 32,000 members respectively, are two of the thousands of Facebook groups focused on a wide range of special interests.

Wester, 45, said the rewards of “waterfalling” are obvious—getting exercise outdoors, experiencing a sense of discovery and natural beauty and more.

When not operating “the midnight train to Georgia” or caring for his 9- and 11-year-old daughters, Wester lately has spent much of his time hiking through the woods of Wilkes to find and photograph places where the powerful combination of water, gravity and time sculpted places of cascading beauty.

The dozen or so books related to Wilkes County and western North Carolina history in the back of Wester’s Jeep reflect another aspect of his exploration.

He enjoys learning the histories of remote places he visits and this research led to his discovery of a dozen or so historical “named” waterfalls, including several in the Brushy Mountains like Gilreath Falls, Wisseehiggins Falls, Glen Addie Falls and Dixie Rock Falls.

Since Wester’s passion for the waterfalls and history of Wilkes began three to four years ago, he also has learned colorful and sometime tragic stories of families who lived near the waterfalls he visited.

One is the story of a young woman who lived near Buck Falls, one of Wester’s favorite Wilkes waterfalls, in the Ferguson area. The story began near the end of the Civil War, when the woman’s husband was off fighting in Virginia and Union cavalry were in Wilkes while raiding western North Carolina.

Word came that Union raiders planned to come to the area where the woman lived, so other women there collected their children and as many valuables as possible in preparation for hiding in nearby mountains. The young woman living near Buck Falls had no children and decided to stay and protect her home and belongings.

As the story goes, Union soldiers raped the young woman and as a result she lost her mind. Unable to control her extreme behavior after he returned home from the war, the woman’s husband often locked her up. He eventually remarried and the first wife lived for many years at the insane asylum in Morganton.

Wester said he developed an interest in waterfalls while growing up in northern Ohio, when his family took trips to places like Niagara Falls, N.Y. “I have always been drawn to water—the Great Lakes where I grew up, a pond, the ocean, a creek, no matter the size.”

“I was driving two to three hours to see waterfalls and it occurred to me that there must be some in these lower mountains” closer to Iredell County, he said.

Wester said his assumption was affirmed. He first visited Moravian Falls and started hiking to the many waterfalls in Stone Mountain State Park. That led to searching out waterfalls in nearby Doughton Park and Thurmond Chatham Game Lands in Wilkes.

“Every creek coming off the Blue Ridge Mountains has waterfalls,” said Wester, adding that it generally is accepted that a drop of at least 10 feet is needed for a site to be considered a waterfall.

Some of local waterfalls plunge off protruding ledges or through narrow chutes, some tumble over and between numerous ledges and boulders, some slide down smooth, slanted expanses of rock and some are a jumbled mixture. Their characteristics vary with precipitation and some more easily freeze than others.

Wester studies topographical maps and identifies areas of mountain streams that appear to have waterfalls based on contour lines indicating very steep terrain. In Wilkes, he said, these places are often on private property. This includes a larger number of waterfalls in the Brushy Mountains, where there is no government-owned land.

“I don’t just park my car and start walking past posted (land) signs. I’ve had pretty good luck with asking for permission from landowners” to visit waterfalls, he said. “Once they know you’re not there to hunt, they generally respond well.”

Wester said that in addition to giving him permission to walk on their property, many landowners he contacted told him about other waterfalls he might want to visit.

He noted that the need for landowner permission is less obvious when it’s clear local people frequently visit a site.

Wester started communicating with Kevin Adams of Waynesville, who wrote and took the photos for “North Carolina Waterfalls,” about waterfalls in Wilkes that Adams didn’t know about.

“North Carolina Waterfalls,” first published in 1994 and its multiple revised editions, are considered the most complete guides to waterfalls in the state.

Adams has hiked with Wester to several waterfalls in Wilkes, but Adams primarily only includes those on public land and so excludes most of the waterfalls he learned about from Wester.

Wester said many “waterfallers” are avid photographers like Adams.

Adams stated in a blog, “Photography is an excuse, a reason if you will, to get out of bed in the morning and see that sunrise, and to stay out for that sunset, when maybe you’d rather go in and have dinner. And to hike that trail that maybe you wouldn’t hike because your knees aren’t feeling good, but you do it anyway. Photography is the mechanism that keeps you on course to do that.”

Wester agreed with that perspective but said his camera skills aren’t enough for him to be considered a photographer. He said he snaps a few for documentation.

He said waterfalls have always added a certain special effect to his love of water.

“The calming, healing effects of falling water are unmistakable. My favorite part of visiting a waterfall is hearing it in the distance before I even see it. It’s an exciting moment for me,” Wester said.

In addition to the waterfalls mentioned above, waterfalls Wester has documented in the Brushy Mountain area include Camp Harrison Falls, Boone Falls and World Rock Falls.

Also in Wilkes, he has been to Baptist Falls, Hidden Falls, Carter Falls and Bushwacker Falls.

A few clouds from time to time. Low 66F. Winds light and variable.