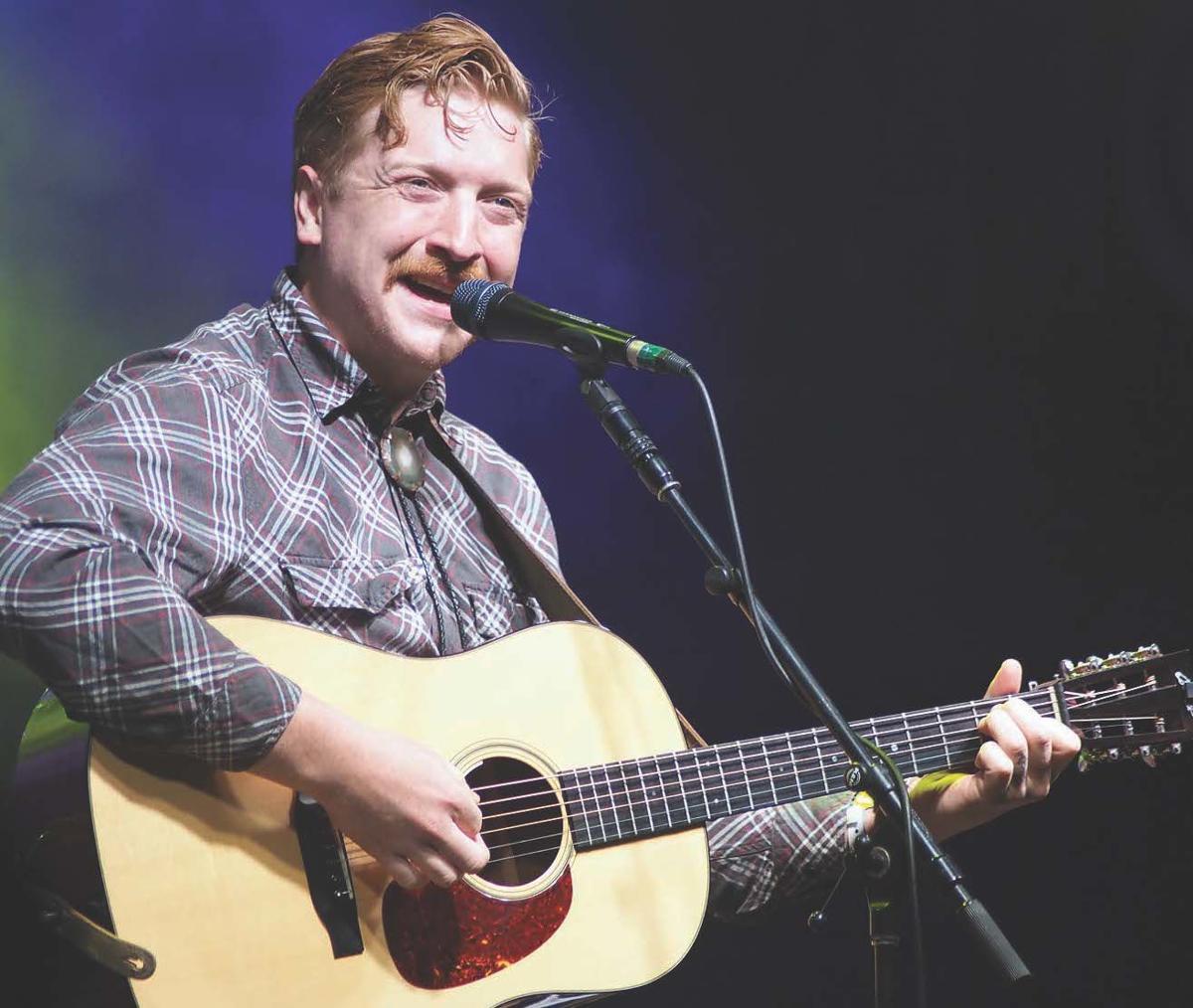 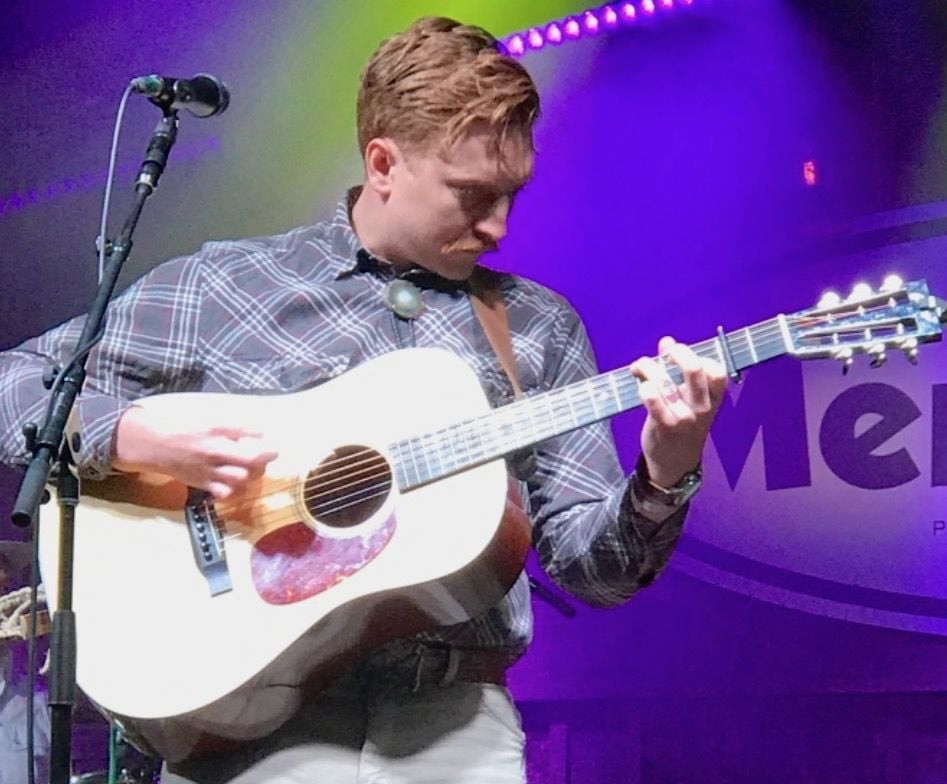 ON THE WATSON STAGE - Tyler Childers had top billing as the last act on the Watson Stage Friday night at MerleFest.

ON THE WATSON STAGE - Tyler Childers had top billing as the last act on the Watson Stage Friday night at MerleFest.

“Intimacy comes from being yourself on the stage and making the audience feel, without trying, that you’re sittin’ down there with ’em, playing, and that can happen in a big hall, if you have a good audience that want to listen.”

Tyler Childers and his band had top billing as the last artists on the Watson Stage at MerleFest Friday night, but for many it was the first introduction to Childers’ Southern-soaked voice and lyrics recounting haunting truths that come from struggling to carve out a life in rural Appalachia.

The Kentucky native opened his set with the hard-driving rhythm of “Whitehouse Road,” a breakout hit that helped gain him national attention in 2017, after serving as part of the soundtrack for Anthony Bourdain’s “Parts Unknown” episode about life in rural West Virginia.

Within seconds of hearing the first few cords of the song, followed by the sound of his voice, the crowd was on its feet amid chilly temperatures and blustery wind.

“When you lay me in the cold hard clay

Won’t you sing them hymns while the banjo plays?

Tell those ladies that they ought not frown

‘Cause there ain’t been nothing ever held me down

Lawman, women or a shallow grave

Get me drinking that moonshine

Get me higher than a grocery bill

Take my troubles to the high wall

Throw them in the river and get your fill.”

“To be honest, I’d never heard of Tyler Childers,” said Tracy Bumgarner, who lives near Raleigh but grew up in Wilkes County. She came back to attend MerleFest with her extended family.

“But I tell you one thing, after hearing him sing and play country music the way it was meant to be, I’m a fan. He’s the real deal. He’s not putting on some fake hillbilly accent or pretending to be all cowboy-like. He’s one of us. A good old mountain boy who’s seen the same things I seen. You can hear in his voice he hurts just like I hurt. You can’t fake something that real.”

Backed by drums, electric bass, pedal steel and a fiddle, Childers took his place in MerleFest history, stepping into the spotlight that for than more 30 years has shined on some of the greatest musical acts in American history such as Willie Nelson, Ricky Skaggs, John Prine, Dolly Parton, Bruce Hornsby, Tony Rice and more.

His short, flame-red hair illuminated his face like a blistering halo— a harbinger of the scorching talent that lies within him.  Childers was named the 2018 Americana “Emerging Artist of the Year” and hailed by Rolling Stone magazine as the “21st Century Voice of Appalachia.”

And while many festivalgoers echoed Bumgarner’s first impression of the “new” 27-year-old storyteller, Childers has had his “nose to the grindstone” for more than 10 years by playing and writing his own brand of music since high school, in keeping with the theme of one of his hit songs.

In 2011, Childers made his debut recording, “Bottles and Bibles,” in a friend’s home studio. Despite the songwriter’s young age at the time, his lyrics spill over with timeworn tales laced with brooding Southern gothic themes of scandal, alcoholism, suicide, hidden addictions and aching love.

In his song, “Hard Times,” from his first album, Childers writes:

“I bought a house at the mouth of the holler;

A ring at the pawn shop, and a crib for the kid;

I heard some word there was work up in Hindman;

I’m going tomorrow and hope that there is.”

Growing up in Lawrence County, Ky., in the eastern coalfield region of the state, with a population less than a fourth of Wilkes County’s, Childers’ music takes listeners on an intimate tour of the interior of his upbringing.

Raised as a Freewill Baptist, Childers credits his grandfather, who he calls Pappaw, with buying him his first guitar and greatly influencing his distinct, vintage-esque sound.

Haunted by the ghosts of legendary acts from the “Golden Age” of country music such as Buck Owens, Hank Williams Jr., Charlie Daniels and Merle Haggard, Childers’ musical style is an amalgamation of classic country, folk, bluegrass and Southern rock to which no one particular label can apply.

During his hour-long set, Childers played songs from his 2017 critically acclaimed album, “Purgatory,” and repeatedly took time from his set to thank Merlefest goers for staying to hear him and his band play.

“This is a real honor to be here,” Childers told the audience. “I’ve always wanted to come here and play and now here I am.”

Partly cloudy skies in the evening, then becoming cloudy overnight. A stray shower or thunderstorm is possible. Low 68F. Winds light and variable.