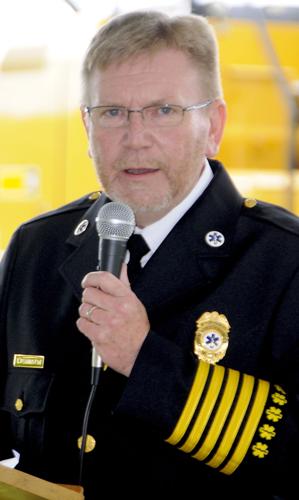 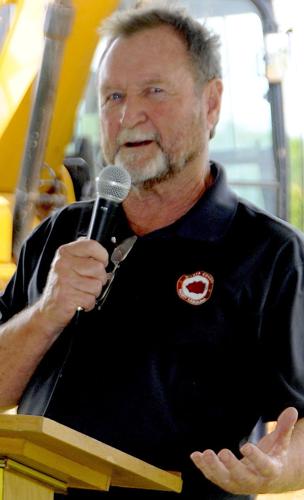 Keith Elmore, chairman of the Wilkes County commissioners, was emcee for ceremonial groundbreaking.

An artist’s rendition shows the front view of the new Wilkes County emergency services facility to be built in Wilkesboro.

Keith Elmore, chairman of the Wilkes County commissioners, was emcee for ceremonial groundbreaking.

An artist’s rendition shows the front view of the new Wilkes County emergency services facility to be built in Wilkesboro.

The Wilkes County commissioners authorized borrowing up to $10 million for building and equipping an emergency services facility on May 10.

County Manager John Yates said $3.1 million of the American Rescue Plan funds awarded to Wilkes and a $362,500 state grant are also designated for the 24,000-square-foot building. It will be the main Wilkes Emergency Medical Services base.

The commissioners unanimously approved a contract authorizing Jefferson-based Vannoy Construction Co. to build the facility for a guaranteed maximum price not exceeding $11.86 million. The contract calls full completion by Nov. 30, 2023.

County government is using the design-build process for the first time and commissioners chose Vannoy as the design-build contractor from several bidders. As such, Vannoy is responsible for all design and construction. Vannoy is hiring all subcontractors and reported that over half are local.

Grading of the 6.75-acre construction site, on Call Street between Oakwoods Road and the Wilkes County Jail, is well underway.

A ceremonial groundbreaking for the facility was held May 12 on a nearby county-owned vacant lot along Executive Drive. Speakers included the commissioners and Wilkes EMS Director Tim Pennington.

Also on May 10, the commissioners approved Chase Bank’s proposal for financing up to $10 million. Chase proposed a 15-year loan with a 2.81% annual interest rate and a maximum bond counseling fee of $7,500.

This was recommended by Chris Alexander of FHN Financial Advisors out of 13 proposals from six banks. Alexander said debt payments will be about $650,000 per year, but about $930,000 the last year. The county will pay about $2 million in interest.

Wilkes County Finance Director Chris Huffman said documents related to the financing were sent to the N.C. Local Government Commission (LGC) for its consideration in June. LGC approval of the funding plans are needed to move ahead.

The emergency services facility is the largest new construction project undertaken by Wilkes County government since the Wilkes Detention Center was built in 2013-14. The county borrowed $12.6 million with an interest rate of nearly 2% for the jail, with Vannoy as the construction manager at risk.

Commissioner Eddie Settle pointed out that the new facility will result in the county no longer leasing a building next to Wilkes Medical Center in North Wilkesboro for the main EMS base.

Pennington said a large area of the one-story building is designed for mass vaccinations and testing and will also be used for training. It will be capable of accommodating drive-through vaccination clinics.

He said the new facility, designed by Asheville-based LS3P, will have space for 10 ambulances and two critical response vehicles. It will have a metal roof and brick veneer siding.

In September 2019, Pennington and Bryant Reid, then Wilkes EMS operations officer, outlined a plan they said would make EMS capable of responding to at least 90% of the agency’s emergency calls in 10 minutes or less. Pennington said then that Wilkes EMS achieved this response goal on about 70% of calls.

The emergency services facility will complete what they outlined, including by helping EMS respond faster to emergencies on U.S. 421 and elsewhere in southern Wilkes.

Two other components of the plan were constructing satellite EMS stations in Mountain View and in eastern Wilkes, which opened in November 2020 and November 2021 respectively.

The facility in Mountain View is near Mountain View Elementary School and the other is near East Wilkes Middle School. Both have an ambulance and staff 24 hours a day.

Another piece of the plan was having an ambulance and EMS staff based in the Millers Creek Fire Station 24 hours a day (two 12-hour shifts), instead of only the daytime shift. This was accomplished in 2019.

In a May 5 budget work session and earlier, the commissioners discussed building a satellite EMS station on property the county already owns in the Boomer. They also talked about leasing space in rural fire stations as an alternative to new construction.

The commissioners have also discussed constructing a new county office building and new facilities for the Wilkes Health Department and Wilkes Department of Social Services on county-owned Executive Drive.

Sunny, along with a few afternoon clouds. A stray shower or thunderstorm is possible. High 89F. Winds S at 5 to 10 mph.

Partly cloudy in the morning followed by scattered thunderstorms in the afternoon. High 87F. Winds light and variable. Chance of rain 60%.