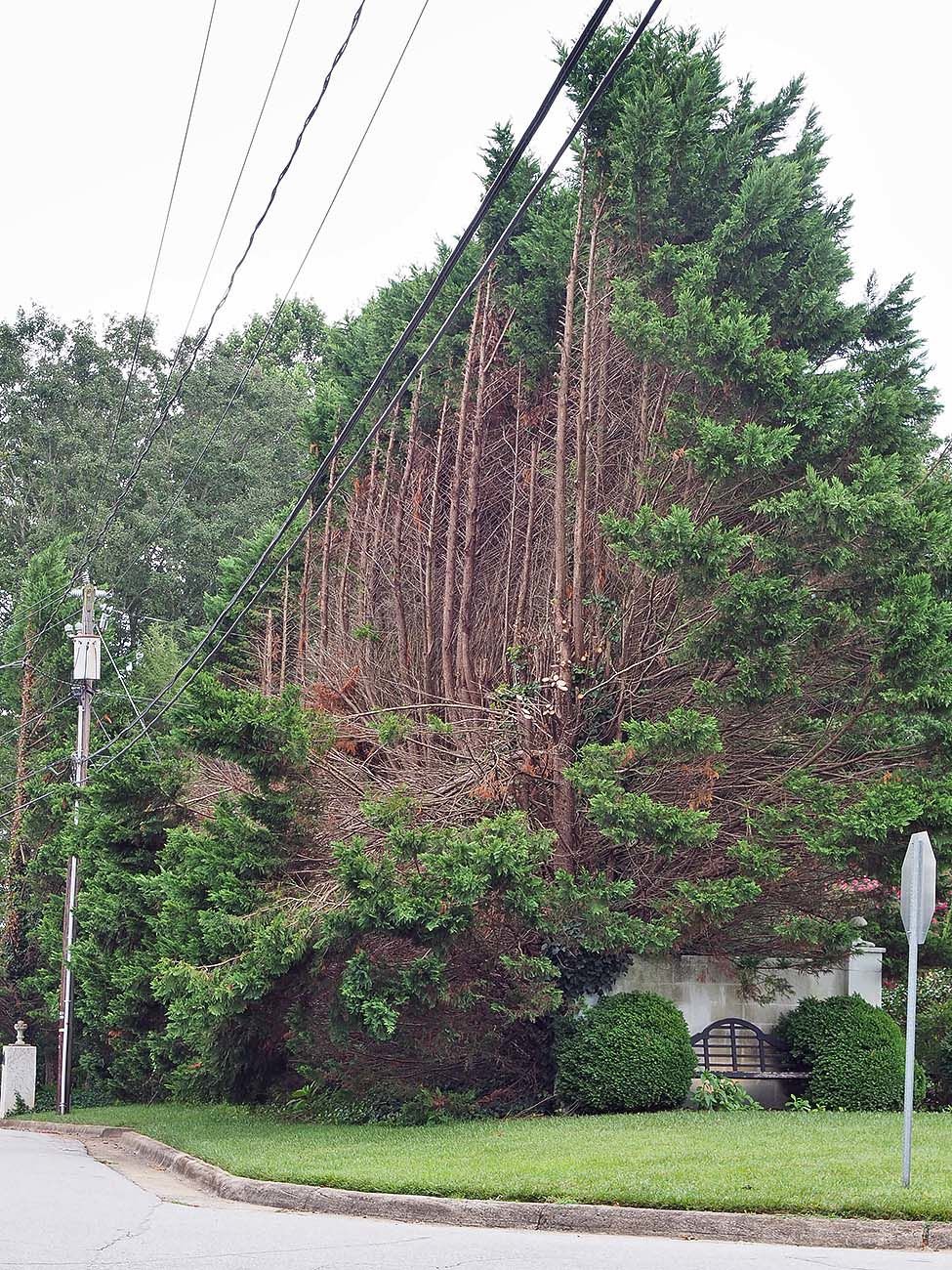 TREE TRIMMING by Duke Energy in July has aroused the ire of North Wilkesboro commissioners and residents. The row of evergreens aggressively side-trimmed is at 103 Finley Street, parallel to Cowles Street. 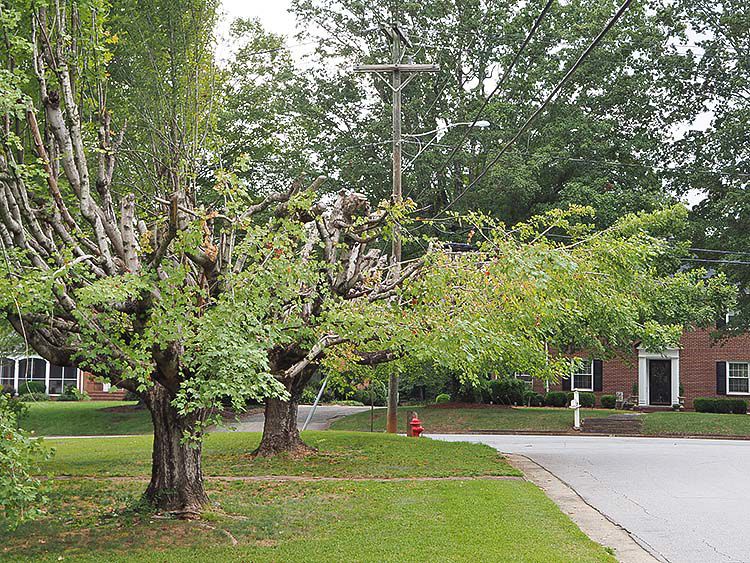 TREE TRIMMING by Duke Energy in July has aroused the ire of North Wilkesboro commissioners and residents. The row of evergreens aggressively side-trimmed is at 103 Finley Street, parallel to Cowles Street.

“I’m appalled at the way they have gone about it. They have absolutely ruined the aesthetics of several neighborhoods in this town,” said Commissioner Bert Hall during the meeting. “And I know there’s nothing this board can probably do other than make public statements and hopefully make Duke Power aware that the citizens here are very displeased with the way they’re doing it.”

Asplundh Tree Expert Co., hired by Duke Energy to trim trees along its power line routes, is supposed to leave door-hanger notices to let people know the work is coming and why. Some commissioners and people in the audience acknowledged that notices were left on their doors.

In the Finley Park neighborhood in mid-July, said Hall, Asplundh tree pruners “absolutely ruined old oak trees that have been there since I was a little boy. And it’s not just there—it’s all over town that they’ve butchered these trees.”

Commissioner Debbie Ferguson agreed with Hall and added, “There are trees left that homeowners are probably going to have to spend several thousand dollars trying to deal with. The mess left on their property by Duke Energy (is) an unplanned, unbudgeted, unexpected expense for people. And it really has affected the aesthetics of some areas of town in a bad way.”

Hall said an arborist told him Monday that heavily pruned trees along Finley Street and Cowles Street wouldn’t survive. “Pruning is not what they’re doing; they’re butchering them. It’s in their right of way, and they can do what they want to, but they’re not treating their customers the way they should.”

According to the Duke Energy website, “integrated vegetation management practices” are used when trees are trimmed within the company’s power line rights of way. These practices are based on the type of power line and voltage, type of vegetation and proximity of vegetation to lines.

The website said Duke Energy hires qualified, trained tree personnel to inspect and clear vegetation that could cause power outages if it grew into electrical equipment or fell across power lines. The company said lateral and directional pruning methods endorsed by tree care professionals are used, rather than “rounding over” trees.

These cutting methods include the “side trim,” used to remove most of the branches on one side of a row of evergreens at 103 Finley Street, and the “L trim,” used at 102 Finley Street to cut L-shaped slices out of two large maple trees, leaving some branches hanging under and on the other side of the power lines.

Ginnie Story of 103 Finley Street said Wednesday that it was “unfair for Duke Power to send in men who didn’t know anything about cutting a tree. They butchered my trees and left it for me to deal with.”

Story said about her evergreens adjacent to Cowles Street that were trimmed, “I can cut them down, but then I’m left exposed to the street. That’s why they’re still standing there like that.”

The company said pruning is conducted based on maintenance schedules but trees within its rights of way may be trimmed or removed at any time. Duke Energy has this authority under easements acquired from property owners.

They should be glad Duke is doing all they can to keep the power on, if not, they would all be crying complaining this winter when it went out. Those that complain will be the last ones to have power restored.

Partly to mostly cloudy skies with scattered thunderstorms before midnight. Low near 65F. Winds light and variable. Chance of rain 40%.