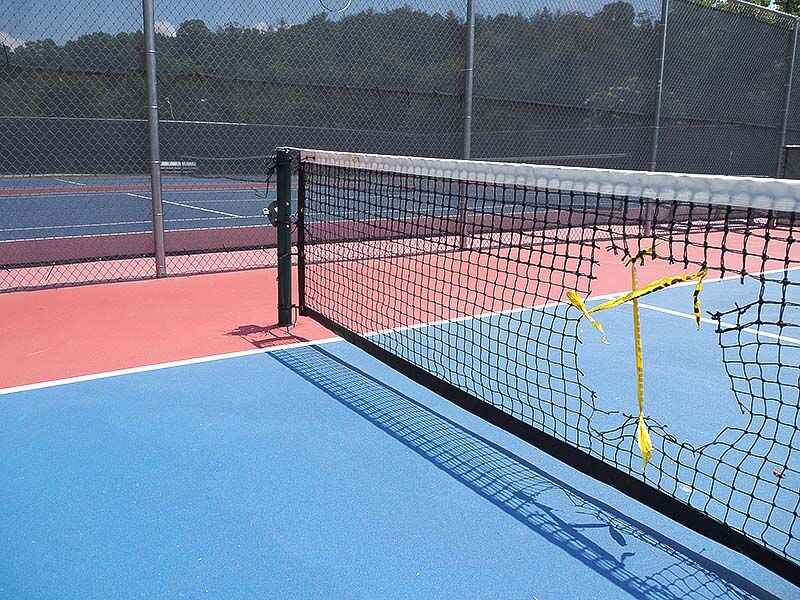 PICKLEBALL COURT net at Cub Creek Park in Wilkesboro was cut sometime over this past weekend. Wilkesboro Town Manager Ken Noland did not know if the act was related to opposition to the pickleball expansion at the park or “just a random act of thuggery.”

SHARON LYALL, HOPE COFFEY, back, and Hilda Smith, front, are playing pickleball at one of three courts at the First United Methodist Church in North Wilkesboro.

PICKLEBALL COURT net at Cub Creek Park in Wilkesboro was cut sometime over this past weekend. Wilkesboro Town Manager Ken Noland did not know if the act was related to opposition to the pickleball expansion at the park or “just a random act of thuggery.”

SHARON LYALL, HOPE COFFEY, back, and Hilda Smith, front, are playing pickleball at one of three courts at the First United Methodist Church in North Wilkesboro.

Opposition has arisen to plans for using portions of two tennis courts in Wilkesboro’s Cub Creek Park for both tennis and pickleball.

A petition being circulated asks the Wilkesboro Town Council and the town’s Parks and Recreation Board to scrap these plans and hold an open meeting, with prior public notice, so that “everyone can be heard and a decision can be made that best serves all park visitors.”

Local tennis player Gerianne Hannibal authored the petition, which by Monday had 10 typed and five handwritten names referred to in the one-page document as “undersigned players.”

On March 30, the Wilkesboro Parks and Recreation Board agreed by consensus to modify Cub Creek Park’s two tennis courts to allow both tennis and pickleball. The petition asks that this decision be stricken.

There are two pickleball courts elsewhere in Cub Creek Park, each about one-third the size of a tennis court.

Wilkesboro Town Manager Ken Noland said Monday that portable pickleball court netting has been ordered and that perpendicular striping for pickleball play on the tennis courts at Cub Creek Park should be in place by mid-August. The 2020-21 town budget, approved in June, included $5,000 for this.

Explaining use of the tennis courts for both tennis and pickleball, Noland said, “More than likely it’ll be an honors system in which adults should be able to manage themselves. There will be schedules devised that are accommodating to both (sports), with alternating days and times.”

Noland noted, “We wish we could build more tennis courts, but they’re so expensive.”

He said a few tennis players confronted him on July 17 at town hall after hearing about plans for establishing pickleball courts on the tennis courts earlier that morning.

Pickleball was not on the agenda for the Parks and Recreation Board’s quarterly meeting on March 30.

According to minutes of the meeting, held remotely via Zoom, Bob Berry requested more pickleball courts at Cub Creek during the time for public comments. Berry recommended striping the current tennis courts perpendicular to the tennis netting and providing portable netting for pickleball usage.

Tony R. Johnson of Wilkesboro, one of the people who signed the petition, urged Wilkesboro Mayor Mike Inscore to reconsider the March 30 decision in a July 17 email. Johnson called the plans “disturbing news.”

Johnson wrote, “I do not think that this was handled properly as no notice was given for those that play tennis to have a voice in this decision. Cub Creek has the only decent tennis courts in Wilkes County. The courts at the college (Wilkes Community College) are still closed and in very poor condition. North Wilkesboro’s four courts (at Memorial Park) are also in need of repair and the county does not have any at all.”

Johnson asked Inscore how use of the tennis courts would be enforced by the town and how to report it if people played pickle ball on days or hours designated for tennis. “I can see a lot of people being upset and feelings hurt should this go forward,” he wrote.

Noland confirmed Monday that one of the pickleball court nets was cut this past weekend. A similar incident occurred about six to seven months ago, he said. “Who knows who did this, but we hope it’s none of our players—just a random act of thuggery.”

He continued, “Tempers are short right now for a lot of reasons, but Wilkesboro wants to accommodate all our citizens and I think we can come up with a plan to accommodate most of the people.”

Wilkesboro Parks and Recreation Board members are Dee Sullivan, Piper Church, Robert Doyle, Susan Buchanan and John Henry Groce, with one vacancy. Buchanan didn’t attend the March 30 meeting. Appointments to the board are approved by the town council. Council member Nellie Archibald is the council’s liaison to the board.

“It’s a citizen committee, and we put ads in the paper asking for people to participate on these boards,” said Noland. “That’s how you get your voice heard.”

Noland said pickleball isn’t planned to be on the agenda of the Aug. 3 council meeting, but the parks board is expected to discuss it again during its Aug. 10 meeting.

There also are three public pickleball courts inside the Wilkes Family YMCA in Wilkesboro and three more inside the First United Methodist Church of North Wilkesboro.

David Wiles, who helped get pickleball established in Wilkes, said Monday that the Town of Boone plans to build an indoor facility with shared tennis and pickleball courts. He said the two sports are played on the same courts in a large, multipurpose facility in Concord.

Pickleball, played since 1969, is a paddleball sport combining elements of tennis, badminton and table tennis. Pickleball rackets, smaller than tennis rackets, are solid like those used for table tennis. A perforated polymer ball similar to a whiffle ball is used. Statistica reported that there were about 3.5 million pickleball players and about 18 million tennis players in the United States in 2019.

Sunny along with a few clouds. A stray shower or thunderstorm is possible. High 86F. Winds light and variable.