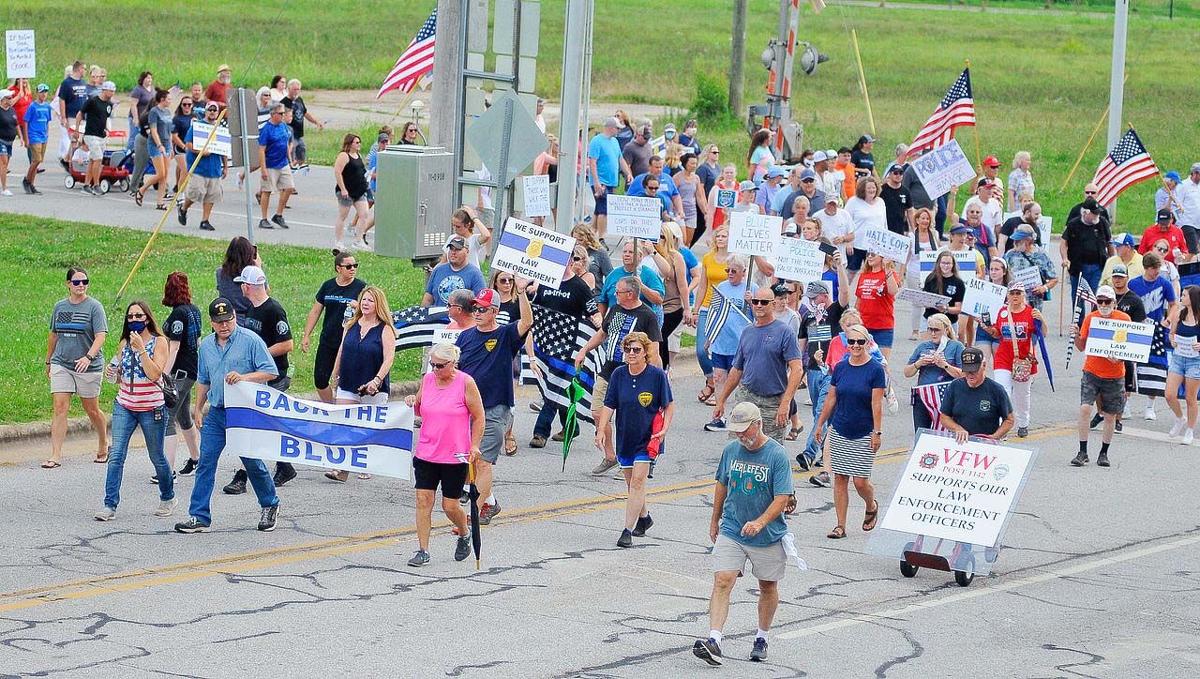 BACK THE BLUE WALK turns from Wilkesboro Avenue onto the Central Business District Loop in North Wilkesboro Sunday afternoon. About 175 people participated. 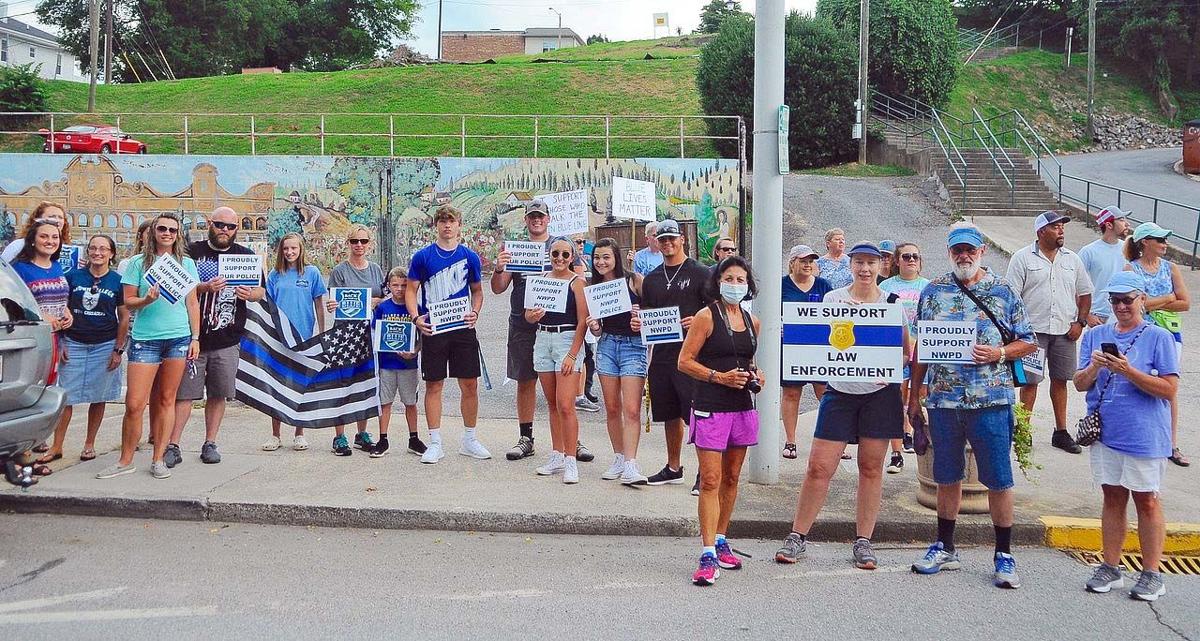 PARTICIPANTS gather in front of the North Wilkesboro Police Station on Main Street before the Back the Blue walk Sunday afternoon. 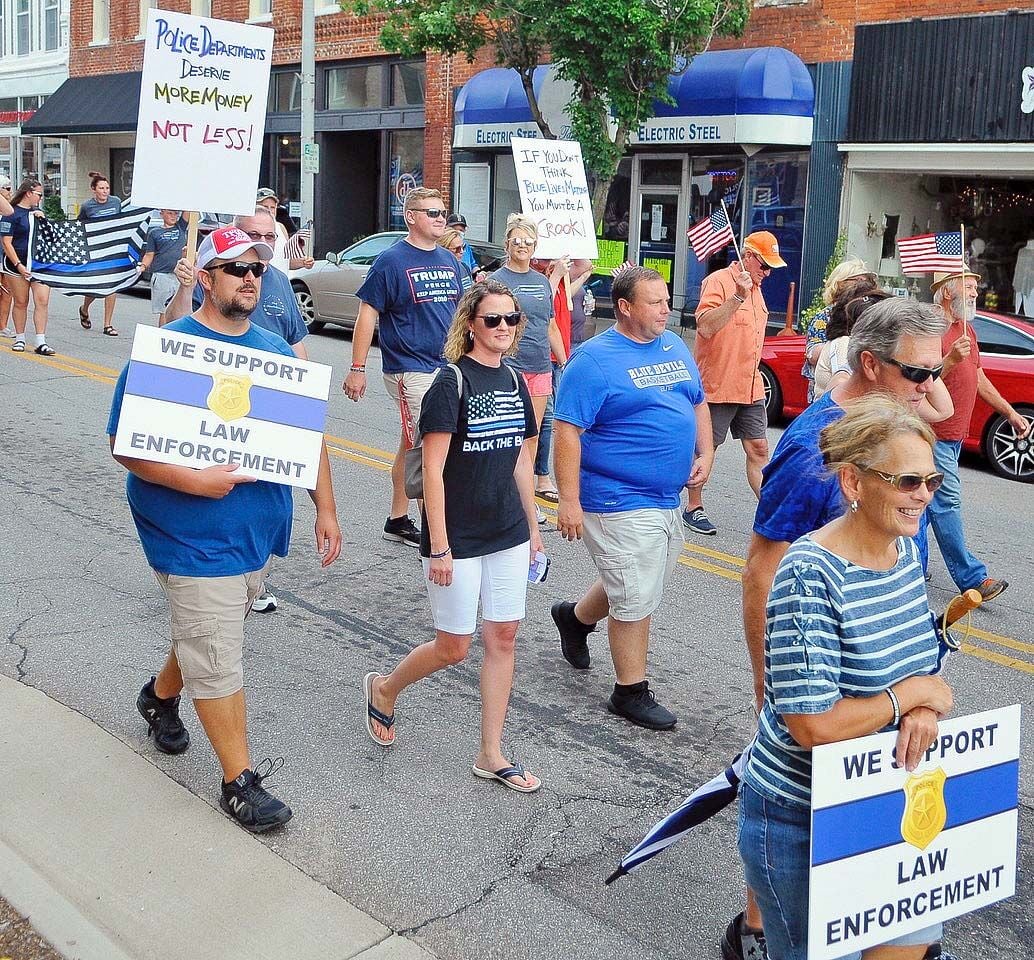 SENTIMENTS of participants in Back the Blue walk Sunday afternoon are reflected in signs and flags they’re carrying, as well as their T-shirts. 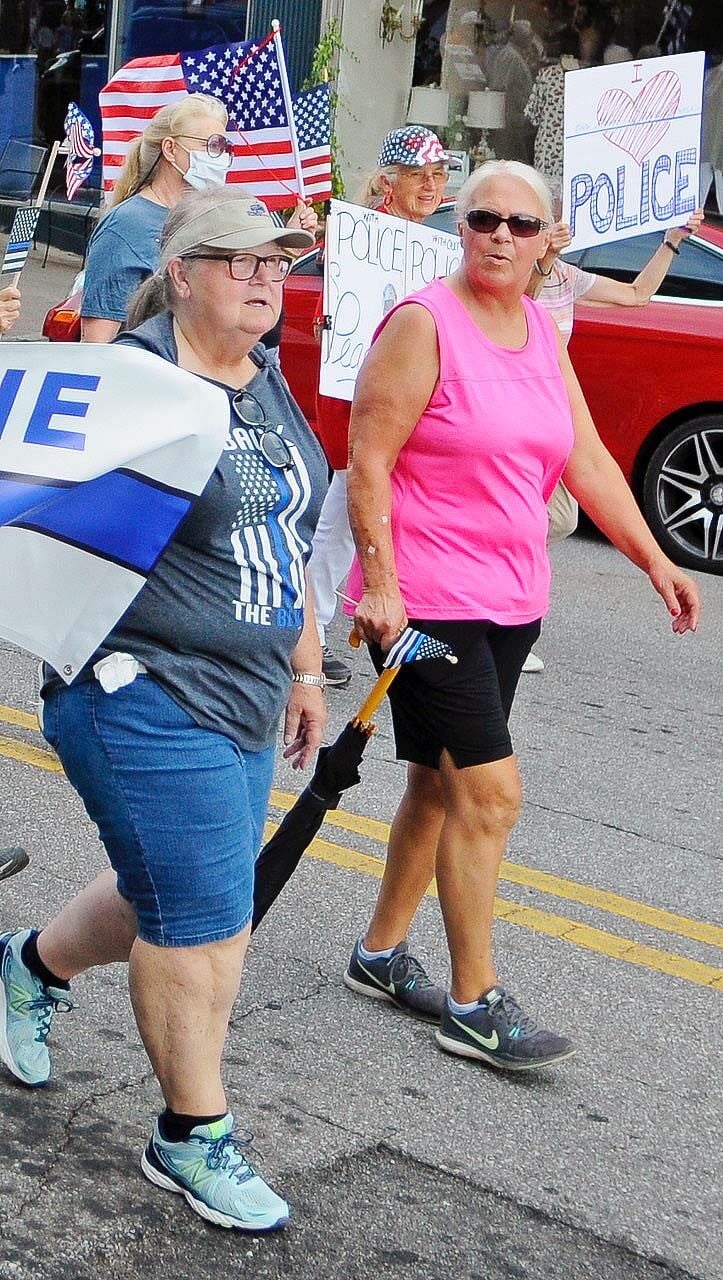 SUSAN DAVIS, left, was the primary organizer of the walk on Sunday. Davis retired from the Wilkes Sheriff’s Office about a year and a half ago after working there for 30 years.

BACK THE BLUE WALK turns from Wilkesboro Avenue onto the Central Business District Loop in North Wilkesboro Sunday afternoon. About 175 people participated.

PARTICIPANTS gather in front of the North Wilkesboro Police Station on Main Street before the Back the Blue walk Sunday afternoon.

About 175 people participated in a Back the Blue walk in support of law enforcement Sunday afternoon in and near downtown North Wilkesboro.

They sang “Amazing Grace” and “God Bless America” and many carried signs and wore T-shirts with a variety of statements on the walk, which was nearly a mile long.

Messages on some of the signs were simple, such as, “Enough is enough;” “Blue lives matter” and “I proudly support NWPD.”

There was a “Thank you, thin blue line” sign,” representing the idea that police and other law enforcement protect society by standing between law and order and chaos.

Other signs more directly reflected that sentiment, such as, “With police, peace. Without police, murder, theft, violence, robbery, death.” Another was, “How many people would take a bullet to protect a stranger. Cops do this every day.”

There was a sign that stated, “If you don’t think blue lives matter, you must be a crook;” and one that said, “Police departments deserve more money, not less.”

Several walkers carried U.S. flags. Some had flags similar to the U.S. flag but with black and white and one blue stripe (representing the blue line) instead of red and white stripes.

The event was organized by Susan Davis of Wilkesboro, who worked for the Wilkes Sheriff’s Office for 30 years and was a lieutenant when she retired about a year and a half ago.

“In these times that we’re having, law enforcement officers need to know that there are people out there who care about them. Here in the county, I don’t really feel we have a problem, but they still need to know” that they are supported.

Davis said a lot of law enforcement officers thanked her for organizing the walk and stated that it’s nice to know that they have people backing them.

“Sometimes they feel alone, regardless of what they do…. We don’t show them enough appreciation,” she said. “I just don’t know how you can’t back your law enforcement.”

Davis said she was aware of only one negative response after plans for the event were announced.

She spent most of her career working in Wilkes Sheriff’s Office detention centers, including as director of the Women’s Detention Center on Boston Avenue in North Wilkesboro before it was closed when the current jail opened in late 2014.

Sonny Church, a Wilkesboro businessman, assisted Davis and set up a stand on Independence Avenue with free cups of water for the walkers.

The procession started a little after 4 p.m. in front of the North Wilkesboro Police Station, went west on Main Street, crossed the Central Business District Loop, then left on Independence Avenue, left on Wilkesboro Boulevard and right on the CBD Loop.

It ended at the Yadkin Valley Marketplace on the CBD Loop, where North Wilkesboro Police Chief Joe Rankin and Sgt. Brian McManus of the Wilkesboro Police Departments briefly expressed their gratitude for the showing of support.

North Wilkesboro police blocked traffic at intersections along the way and led the walk, which took a little over 30 minutes. The police wore face coverings to help prevent the spread of COVID-19, but very few of the walkers wore them.

Back the Blue events were held elsewhere across North Carolina recently to show support for law enforcement. There was one scheduled at Bibleway Baptist Church in Boone Sunday afternoon.

The Back the Blue route in North Wilkesboro was similar to that of a walk held May 31 to protest the death of George Floyd while in police custody in Minneapolis, Minn., and similar deaths of black men in recent years.

A June 19 walk from North Wilkesboro’s Memorial Park to Wilkesboro’s Carolina West Wireless Community Commons recognized Juneteenth Day, which commemorates the abolishment of slavery in the U.S. during the Civil War.

Local police were also present for the May 31 and June 19 walks.