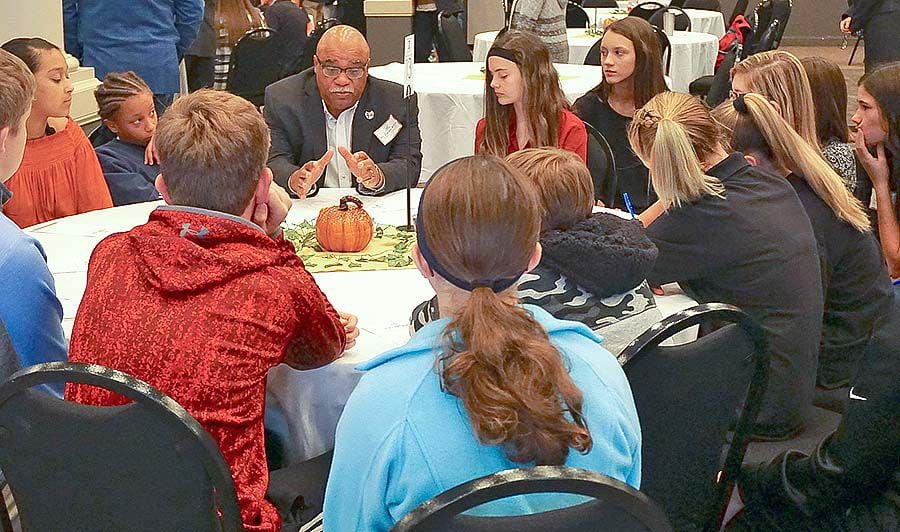 DR. ZAPHON WILSON speaks with local students during a round table discussion at the James Cook Leadership Breakfast. Wilson is a teacher at North Carolina Central University and inductee in the Wilkes County Hall of Fame. 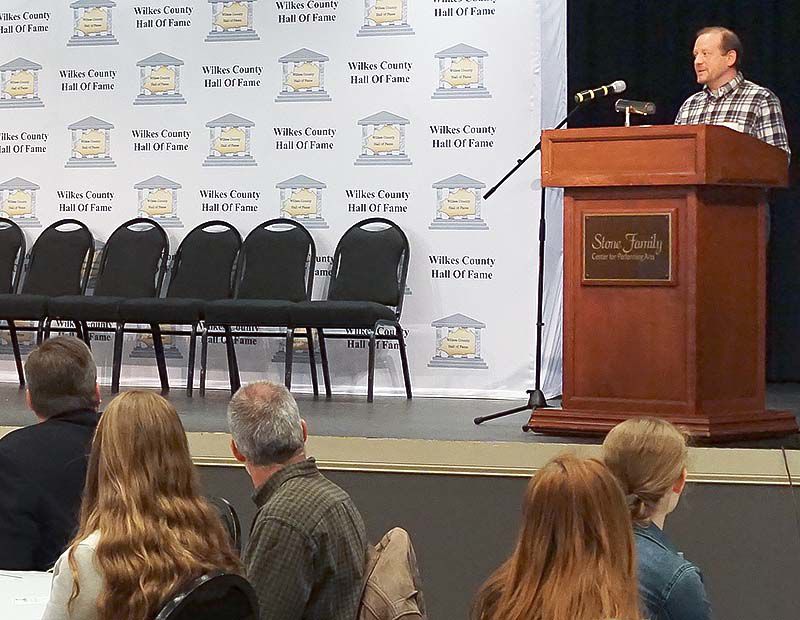 MARK COOK is at the podium at the James Cook Leadership Breakfast, named in memory his father. James Cook was a member of the Wilkes Hall of Fame board and spoke enthusiastically about the inaugural youth leadership forum now named for him.

DR. ZAPHON WILSON speaks with local students during a round table discussion at the James Cook Leadership Breakfast. Wilson is a teacher at North Carolina Central University and inductee in the Wilkes County Hall of Fame.

MARK COOK is at the podium at the James Cook Leadership Breakfast, named in memory his father. James Cook was a member of the Wilkes Hall of Fame board and spoke enthusiastically about the inaugural youth leadership forum now named for him.

Wilkes County high school and middle school student leaders were reminded of the importance of making good choices, setting goals and finding positive role models during a recent event hosted by the Wilkes County Hall of Fame Board of Governors at the Stone Family Center of Performing Arts in North Wilkesboro.

“Your generation has the ability to decide. You decide if you want to follow the typical stereotype, or if you want to do more,” said local businessman Mark Cook. “I hear all of the things that millennials are supposed to be, but that’s not what I see. I see a great, dynamic group of kids with the ability to go on and do great things.”

Cook spoke on Nov. 4 at a second annual youth leadership forum, which the hall of fame board recently voted to rename the James Cook Leadership Breakfast in memory of his father. The Cook family sponsored the breakfast this year.

James Cook attended the inaugural youth leadership forum in November 2018 as a guest, less than a month before his death. Cook was a hall of fame board member from 2014 to 2017.

Hall of fame board members saw that James Cook was among the first to arrive and last to leave. They were aware that he thought the event was highly successful and called it the best thing accomplished by the hall of fame initiative.

Mark Cook spoke of why the breakfast was important to his late father and his family. James Cook’s love of reaching and inspiring the youth of Wilkes County was noted. He was known for doing much of this through his work at Cook’s sporting goods in North Wilkesboro.

The inductees each sat at a different table with students for group discussions and went on stage for a panel discussion as students listened. Participating students were chosen by their school principals, some on the basis of being class officers.

Larry Stone Jr., a Wilkes County native and former announcer for the NFL’s Tennessee Titans, led the event by coordinating questions for hall of fame inductees to answer aloud.

He also asked inductees to share their advice and wisdom with students about sacrifices they made and their values and motivators. Stories of the inductees differed, but they all noted the importance of finding your passion, setting your mind to accomplish goals and surrounding yourself with positive influences.

Wilson, a teacher at North Carolina Central University, said his teachers were among the biggest influences on his life when he was in school in Wilkes. “I still picture myself as that 15-year-old kid, who my teacher said could do better.”

Brooks, a teacher at West Wilkes High School, stated, “The influence teachers had on me back then is why I am doing what I’m doing now.”

Bentley urged students to listen to their teachers. “There’s not a teacher anywhere that doesn’t want you to be a success,” added Bentley.

Larry Stone Sr. urged students to work hard and to not be afraid of challenges and change.

“Understand your assignment, do the research and then work at it to the best of your ability,” said Stone.

“Also, be open to change and be willing to take a step out on the plank. Don’t be afraid that you’re going to fail. If you fail, reset your goals. Get back up, and don’t get discouraged. It takes a lot of hard work and determination.”

He added, “You’ve got to set realistic goals and be willing to change those goals. A goal without a plan is just a wish.”

“You’ll know when you’re going down the wrong road. Keep those people around you that give value to your life and love you. Don’t worry if you run into a dead end, back up and start down the other side.”

Inductees told students that they would face many challenges in their careers because that’s part of life. Students were told that meeting challenges head on and living through them makes people stronger.

Wellborn said that though life’s uphills and downhills, “you’ve got to keep on keeping on with your eyes on the prize. There will be a place out there where you’ll look back and say, ‘I’m glad I stayed with it.’”

Larry Stone Jr. asked inductees if a leader should be loud to have his or her voice heard, or if it was better to lead quietly.

Swofford responded, “You can be a quiet leader. Leadership is a person that gets out there and does the job to the best of their ability and takes people along with them.”

Holbrook added, “You lead quietly by treating everyone well, and with respect. Take time to listen and speak to others calmly. Screaming never works.”

Murphy said, “Leadership comes down to thinking about the bigger picture. Remove yourself from it, and speak for others.”

Larry Stone Jr. also asked inductees to share challenges they faced when influencing others as leaders.

Wilson said patience is important and added, “Be able to engage people and meet them where they are. Don’t try to set artificial standards. It’s a growth process. Ultimately, the leader has to take responsibility for success or failure.”

Lakey stated, “It’s a team effort, and you’ve got to take care of your people.”

Wellborn finished with, “If you think you’re a leader and no one is following you, you’re just taking a walk.”

When Larry Stone. Jr. asked inductees to share one last piece of advice, the inductees agreed about the importance of being surrounded by positive role models and being true to yourself and others.

Swofford stated, “As future leaders moving forward, learn to love yourself. Not to the point of arrogance, just don’t doubt yourself. If you find something in your life you don’t love, then change that part of your life. You’re going to have change all of your life.”

Brooks added, “So often in life, we don’t see the path we have journeyed until we look back in life and see how we ended up where we are. I took the road less traveled.”

Larry Stone, Jr. challenged students to study, research and find someone worthy of being nominated to the hall of fame.

Nominations for the 2020 hall of fame class are being accepted through Jan. 31. Nomination applications are at www.wilkescountyhalloffame.org.

Evan Handy, hall of fame board president, encouraged including as much information as possible about a nominee. “Once nominated, always nominated,” he added.

The hall of fame is a 501 (c) (3) nonprofit with a goal of a mission of inspiring others by promoting and honoring the excellence of the people of Wilkes.

The seventh annual Wilkes County Hall of Fame Gala will be on May 21, 2020, in the Stone Family Center for Performing Arts.

Sunny to partly cloudy. A stray shower or thunderstorm is possible. High 88F. Winds SSW at 5 to 10 mph.

A return to team sports