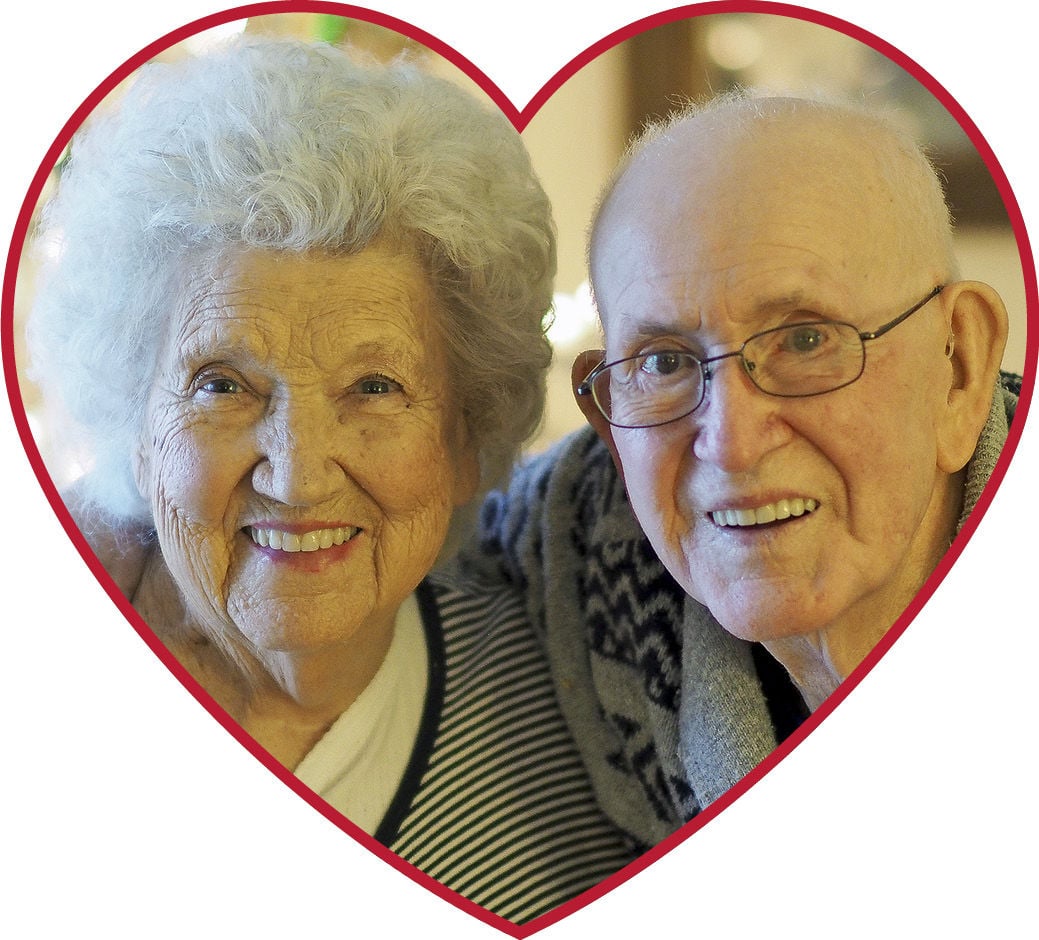 CLAY AND EDNA ROLAND have written new chapters in their love story for 75 years. Clay, 96, and Edna, 91, celebrated their 73rd wedding anniversary on Dec. 24. They live off Mountain View Road in Hays. 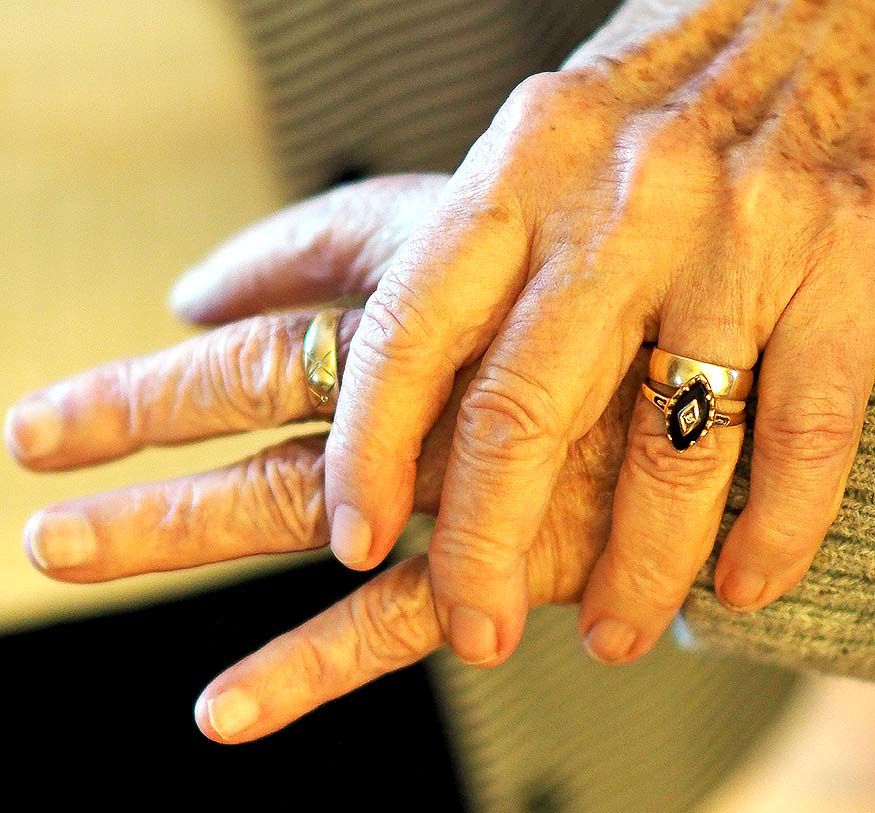 GOLDEN RINGS are symbols of the love and commitment shared by Clay and Edna Roland of Hays. The couple exchanged marriage vows on Dec. 24, 1946.

CLAY AND EDNA ROLAND have written new chapters in their love story for 75 years. Clay, 96, and Edna, 91, celebrated their 73rd wedding anniversary on Dec. 24. They live off Mountain View Road in Hays.

GOLDEN RINGS are symbols of the love and commitment shared by Clay and Edna Roland of Hays. The couple exchanged marriage vows on Dec. 24, 1946.

The moment he laid eyes on her, Clay knew she was the one.

Edna was a 16-year-old looper at Wilkes Hosiery Mills in North Wilkesboro, making Buster Brown socks for children. Clay worked downstairs at the textile mill, in an area the men called the board room.

“She’s going to be my wife one day,” he declared to his co-workers at the mill, pointing to Edna.

Clay Roland was 21 years old when he correctly predicted he would one day marry Edna Rhodes.

They got married on Christmas Eve 1946, after a two-year courtship. This year, on Dec. 24, they’ll celebrate their 74th wedding anniversary.

Clay called Edna “Baby” when he first met her in 1944, and he still calls her that 75 years later. Old habits are hard to break, regardless of age.

“That’s my Baby right there,” said Clay, pointing to Edna. “She’s been my Baby for many, many years.”

Edna explained that Clay called her Baby in front of everybody. “He’s called me Baby so much at church that everybody else says, ‘Hey, Baby!’ when they speak to me,” she said with a laugh as they were interviewed Wednesday at their home on Mountain View Road in Hays. They’ve lived in that same home since 1961.

Edna said falling in love with Clay in 1944 was completely different from anything she’d experienced. “You meet the one and just want to be with them all the time. I’m 91 years old, and my love for Clay is just as much as it was the first day I started dating him.”

The secret to a long and happy marriage, said Edna, is to center it around love and faith. “Love does not go away—it’s always there. The main thing in marriage is falling in love and knowing that you’ve got the right one.”

She continued, “We’ve enjoyed our life together and done a lot of good things. We hope we’ve been a blessing for other people.”

Edna was born in 1928 and raised on the farm of John Yank and Maude Mayberry Rhodes in Hays. She worked at Wilkes Hosiery for 40-plus years before retiring.

Born in 1923 to James Isaac “Ice” and Annie Shumate Roland of North Wilkesboro, Clay attended Flint Hill Baptist Church while growing up. He worked at Wilkes Hosiery and as a supervisor at Carolina Mirror until his retirement.

The Rolands are active members of Bethel Baptist Church on Mountain View Road, not far from their home. Clay recently received a certificate of appreciation from Pastor Donnie Shumate for his 61 years of faithful service to Bethel. It’s proudly displayed on the wall of the couple’s living room.

When they started dating in 1944, Clay knew that if he didn’t go to Bethel with Edna, he wouldn’t be allowed to continue courting her. It was an easy decision, and they’ve been attending services there ever since.

“We’re both Christians and we love God,” noted Edna. “We go to church and our church family makes the world better.”

Through all of life’s joys and tribulations, their love has endured. Their love (and faith) carried them through the passing of their only child, Janet Roland Martin, in 2006.

Janet Martin, wife of Gary Edward Martin of Hays, was a fourth-grade teacher at Mountain View Elementary School for 30 years before cancer took her at the age of 59. She and Gary had two sons, Chris and Greg Martin, both graduates of North Wilkes High School and the University of North Carolina at Chapel Hill.

Chris and his wife, Maya, are both dentists running their own practice in Raleigh. Their children are Ava, 13, Ella, 11, and Noah, 10.

Greg, national director of sales at Renfert Dental, and Carolyn Martin, who works in retail, live in North Wilkesboro and are parents to Jackson, 15, and Landon, 13.

In their golden years, Clay and Edna Roland have enjoyed taking vacations, especially to Atlantic Beach on the North Carolina coast. They have delighted in watching their five great-grandchildren grow into teenagers.

“We’ve had a good time together,” said Clay. “I thank the Lord for blessing us and letting us live together for all of these years. It’s been a lovely, lovely life together all these years. And my Baby—I still love her.”

And it’s clear that Clay does still love his Baby, more than 75 years after she first caught his eye in a Wilkes County textile mill.