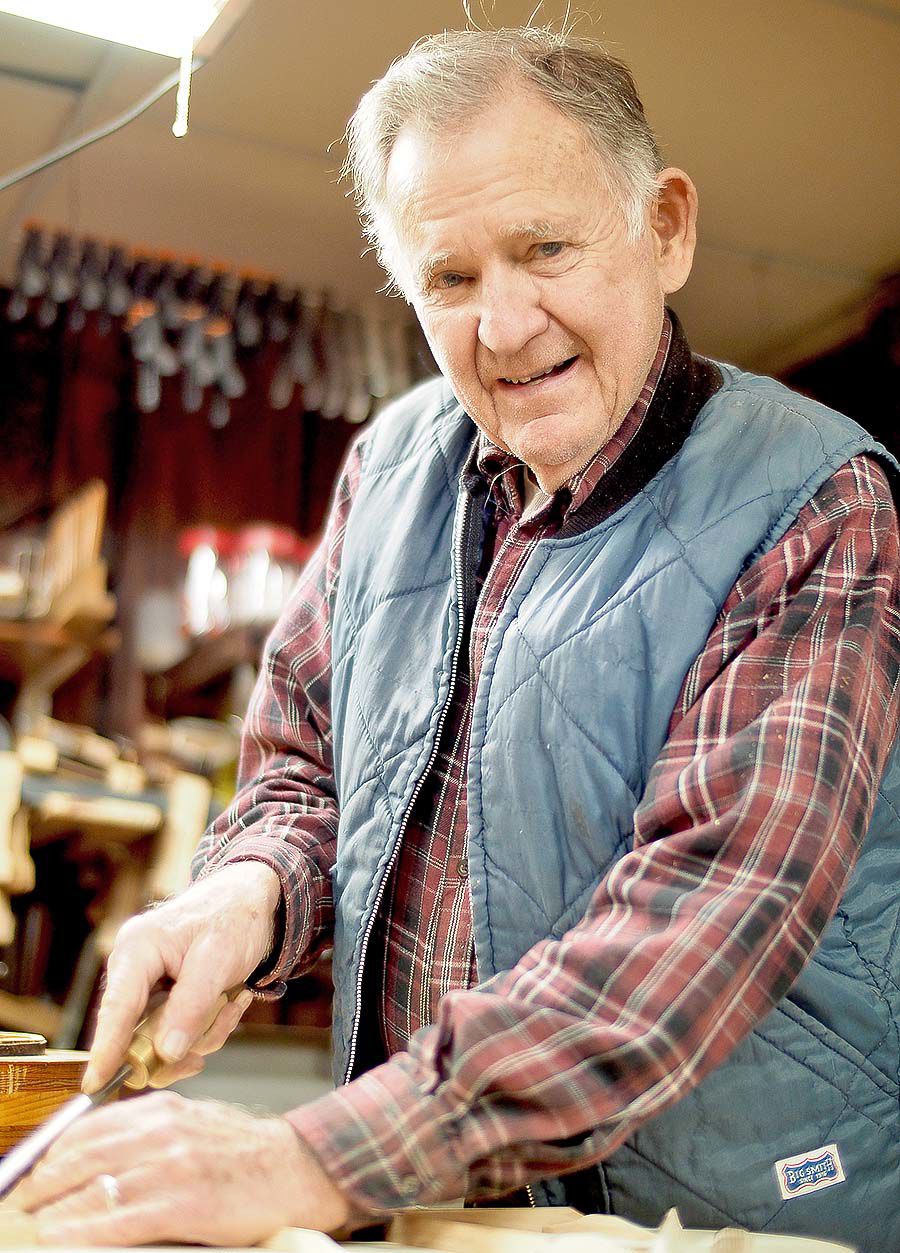 HERB KEY is restoring a 1955 J-45 Martin guitar in the basement of his Mount Pleasant home in western Wilkes County. Key is one of the premier musical instrument repairers and restorers in the area. 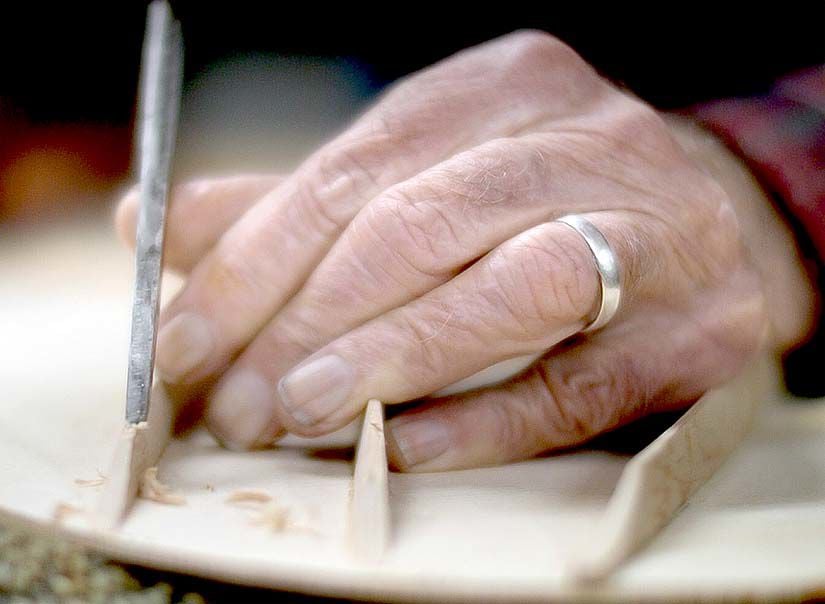 WORKING HANDS of 83-year-old Herb Key show no signs of slowing down. “I love what I do and I don’t see any reason to slow down,” he said Wednesday while working in the basement of his Mount Pleasant home.

HERB KEY is restoring a 1955 J-45 Martin guitar in the basement of his Mount Pleasant home in western Wilkes County. Key is one of the premier musical instrument repairers and restorers in the area.

WORKING HANDS of 83-year-old Herb Key show no signs of slowing down. “I love what I do and I don’t see any reason to slow down,” he said Wednesday while working in the basement of his Mount Pleasant home.

Growing up, Herb Key had a “fix it” mentality—when something broke, there was no money to buy a new one, so he’d repair it.

He would mend a broken axe handle to chop firewood for his family’s wood stove. Key mended whatever was needed to survive during the hard World War II years in rural Wilkes County.

Later, he made his tools and beehives and grew his fruits and vegetables—many from heirloom seeds passed down by his grandmother. Key’s family and neighbors in Moravian Falls taught him to play traditional Appalachian music, and now he passes that knowledge on to others.

“I enjoy making things; it’s just the way I grew up,” he explained Wednesday during an interview at his home in the Mount Pleasant community just west of Wilkesboro. “You’d fix the things you had or made you a new one to replace it.”

Key also made a name for himself as a restorer and repairer of guitars and other acoustic instruments. He began repairing acoustic instruments in the early 1970s and today is one of the best-known guitar repairmen in the area. He works alongside Wayne Henderson of Rugby, Va., a renowned luthier.

“I’ve saved many good guitars from being thrown away, and that’s a feeling of accomplishment for me,” said Key.

He has spent over 50 of his 83 years making, repairing and restoring musical instruments and has played traditional music most of his life. Key even played Carnegie Hall in New York City with Henderson.

“As long as I’ve been in it, I’m still learning things. There’s still things out there I don’t know. It’s out there, if you’ll seek it.”

Key sings story-songs about Wilkes legends like Tom Dula and Otto Wood. “I love doing those old tunes that came out of Wilkes County.” Out of that love for local lore grew the Elkville String Band, of which Key is still a member. The band was named for the community near Ferguson where Dula was born and raised.

In all he does, Key preserves and nurtures Southern Appalachian culture, fighting to keep it from fading into obscurity.

And he shows no signs of slowing down. “I think (woodworking) keeps me young, I really do. It keeps you active every day. And you have a purpose instead of sitting on the couch and dwindling away. There’s things you need to accomplish.”

Herbert Milton Key was born Oct. 25, 1936, near Cub Creek Baptist Church in Moravian Falls. His mother, Estelle Key, would strum the guitar and sing old ballads to Herb and his siblings.

Key learned to play on his mother’s guitar, which still hangs on his living room wall. He played “Wildwood Flower” by the Carter Family on his grandmother Bertha Kilby’s old windup Victrola 78 until he learned to pick it himself.

“One of the highlights of my life was when I finally learned to play that,” he said. “We didn’t have a vehicle, and Daddy was away at war, and all I had was that guitar.”

His father, Woodrow Wilson Key, was a carpenter and built the Moravian Falls house where Herb was born and where his younger brother, Tom, still lives. Herb got his start in woodworking by helping Tom remodel the house.

Key works one day a week in Henderson’s guitar shop in Rugby, repairing and restoring mostly older instruments. He lovingly also refurbishes them in his workshops at home, where he lives with his wife, Mary.

Key built his free-standing workshop, which he calls the “sawdust shop,” with his own hands in 1999. It contains electric saws, routers and planers that “kick up the dust.”

The other workshop is in the basement of his home and is reserved for his delicate, climate-controlled work on guitars, some of which date back to the 1930s.

The most valuable guitar he restored was a rare 1938 D-18 Martin worth about $20,000. He rebuilt it in 2010 and named it “Diamond Joe” because of a diamond-shaped wood patch he put on the front to cover a gaping hole. He saved the top of the original and spruced it up with new sides, back and neck.

For 25 years, Key has managed the guitar competition at Henderson’s music festival at Grayson Highlands State Park in Mouth of Wilson, Va. “That’s been a highlight, but now I’m stepping aside and letting Bobby DeSanto take over. The large amount of money we’ve raised over the years has supported the JAM (Junior Appalachian Musician) program teaching children (in several Virginia and North Carolina counties) how to play our heritage music.”

Key mentored his great-nephew, Alex Key, who now tours in the area as a solo artist and with his country music band, the Locksmiths. Herb even offered to teach Alex the ins-and-outs of guitar repair.

Key said being inducted into the Blue Ridge Music Hall of Fame in 2016 as a luthier is one of his life’s highlights. The Hall of Fame is in the Wilkes Heritage Museum in Wilkesboro.

Interest in Key’s dedication to preservation persists to this day. A 30-minute film about him from 2014, “Herb Key: Nurturing American Heritage,” was re-shown Thursday at the Blowing Rock Art & History Museum in Watauga County. It was directed by Rebecca Branson Jones, a documentary filmmaker and musician from Denton, and Jim Lloyd.

Key said recognition he received because of the film was great, “but I know many people who probably should have been in there rather than me.”

His next project is a 1955 J-45 Martin bought second-hand in 1969 for $100. It needs a neck set, bridge plate and loose braces glued back. After he works his restorative magic, it should be worth several thousand dollars.

“I love what I do and I don’t see any reason to slow down. I’ll keep taking these guitars in as long as they’re there. And there seems to be more of them here lately, so why would I want to quit?”

The “fix it” mentality may be a thing of the past, but Herb Key keeps putting it into practice, one guitar at a time.