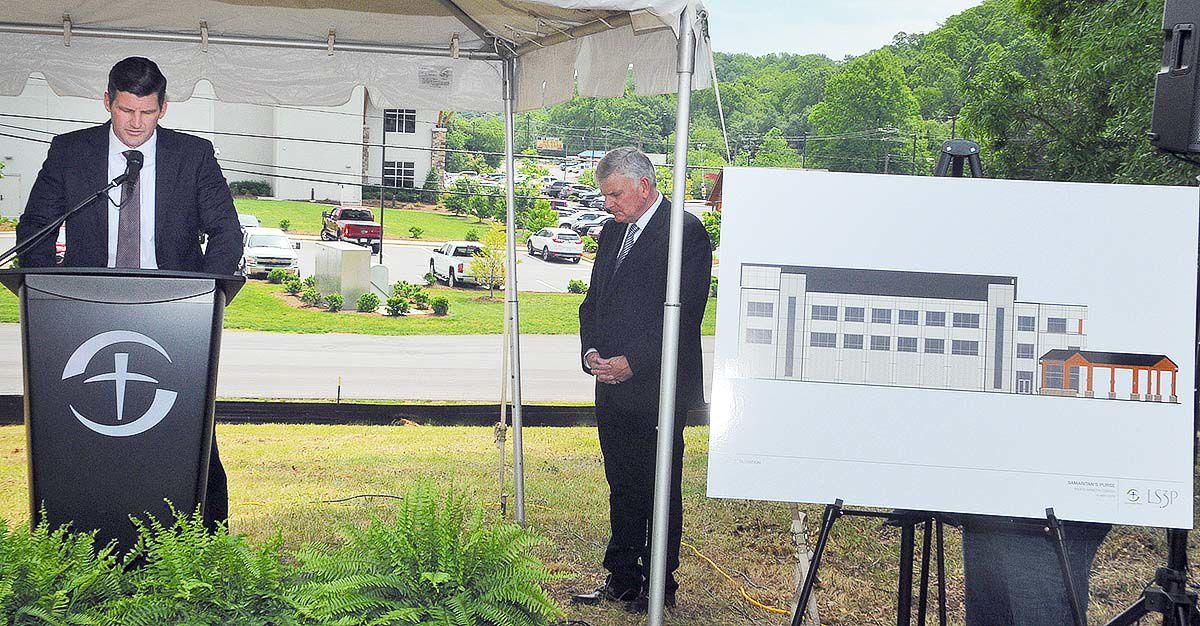 EDWARD GRAHAM, at the podium, shares a prayer dedicating the Wilkes Ministry Center to Christ on Friday. At right is his father, Samaritan’s Purse President Franklin Graham. An artist’s rendition of the 47,000-square-foot building is at far right. 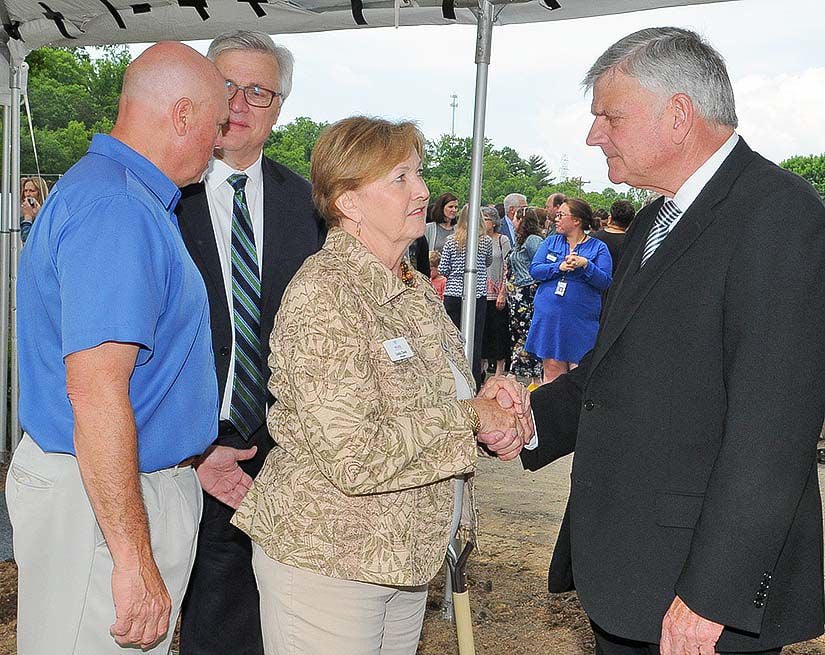 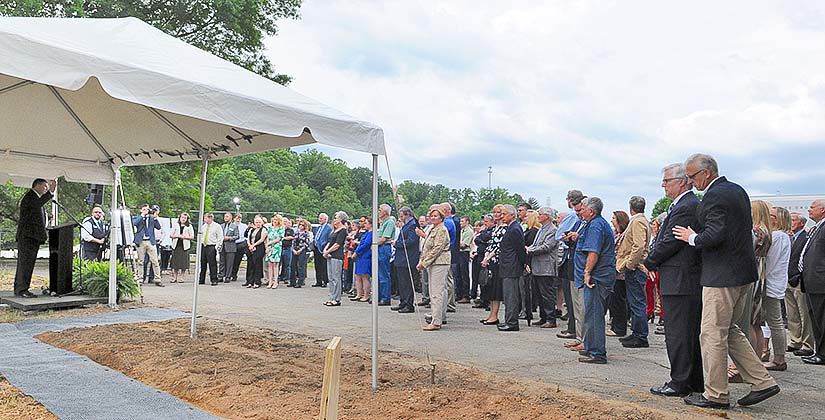 Luther Harrison, vice president in charge of Samaritan’s Purse’s North American Ministries, is at the podium before a crowd of about 250.

Wilkes Ministry Center will include a cafeteria on the bottom floor and offices on the top two floors. About 160 people will work in the building. 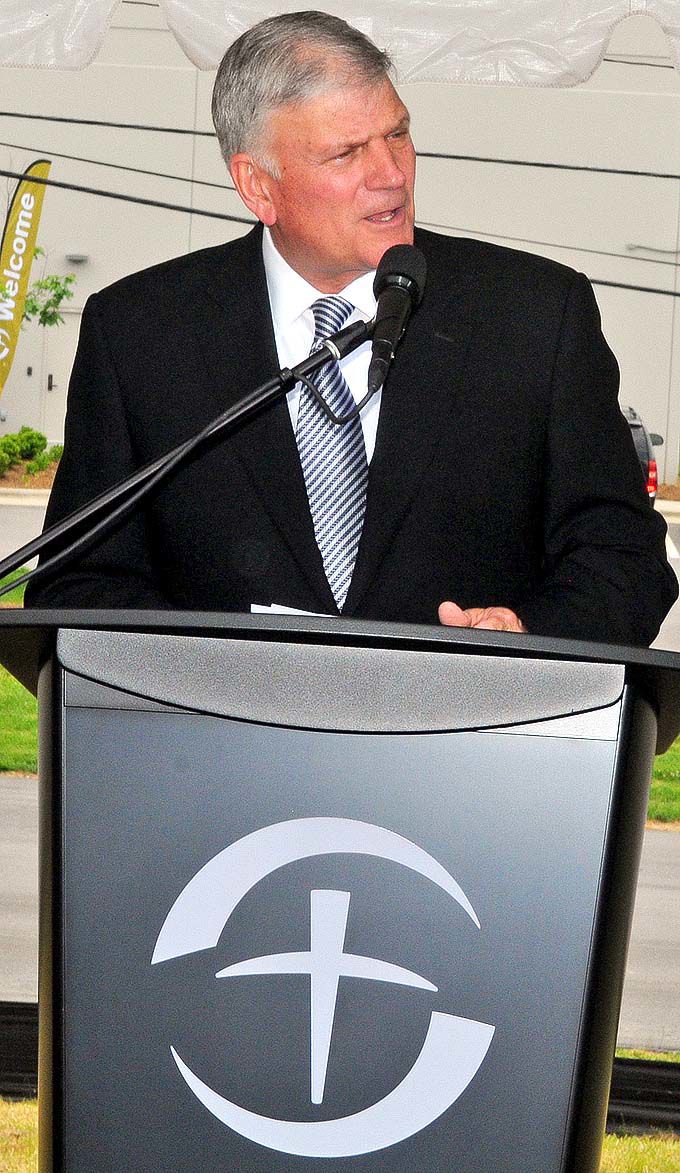 EDWARD GRAHAM, at the podium, shares a prayer dedicating the Wilkes Ministry Center to Christ on Friday. At right is his father, Samaritan’s Purse President Franklin Graham. An artist’s rendition of the 47,000-square-foot building is at far right.

Luther Harrison, vice president in charge of Samaritan’s Purse’s North American Ministries, is at the podium before a crowd of about 250.

Wilkes Ministry Center will include a cafeteria on the bottom floor and offices on the top two floors. About 160 people will work in the building.

Speaking at the ground-breaking ceremony for the new office building, Samaritan’s Purse President Franklin Graham said about 160 people will work there. These are in addition to the ministry’s existing 197 employees in Wilkes.

The crowd of about 250 people applauded as Graham and 11 others, including government, business and Samaritan’s Purse representatives, broke ground on a facility scheduled to be completed and occupied in July 2020.

Interviewed later, Graham said Samaritan’s Purse’s 202,000-square-foot Wilkes Office and Warehouse has no space left for more employees. This larger facility, immediately east of the Wilkes Ministry Center site and White Pine Street, was about a third full when it opened in 2017 with 50-60 employees.

On the other side of the Wilkes Office and Warehouse is a former soft drink bottling plant, where Samaritan’s Purse first established a presence in Wilkes after Coca-Cola Bottling Co. Consolidated owner Frank Harrison of Charlotte donated the building to the ministry about 15 years ago.

Graham said there also is no room left for growth at the Samaritan’s Purse headquarters building on Bamboo Road in Boone. The ministry has over 800 employees in Boone.

He said various departments, including some now in Boone, will be on the second and third floors of the Wilkes Ministry Center. He said the new building will house clerical, management and other positions, with about 60 percent of people working there being new hires.

Graham said specific departments or number of employees moved from Boone to the Wilkes Ministry Center haven’t been decided yet, but added that Samaritan’s Purse staff who live in Wilkes and work in Boone will have first opportunity to work in the new building. The new building may be full “in a year or so” after opening, he added.

The Wilkes Ministry Center’s exterior will be pre-cast with glass, wood and stone and have the same colors as the Wilkes Office and Warehouse, but Graham said the new building will be nicer looking. He said he wants buildings constructed by Samaritan’s Purse to be attractive because “as a Christian organization we represent the king of kings and lord of lords. I don’t believe in building junk…. We want them to be attractive because we represent the Lord Jesus Christ.”

Architect for the Wilkes Ministry Center is LS3P Associated Ltd. in Charlotte and the contractor is Vannoy Construction in Jefferson. Graham said the building is designed to preserve a large tree on the 7.36-acre building site. An architectural drawing shows this near the front entrance.

The Wilkes Ministry Center will have 125 work stations and 28 offices on its second and third floors, a cafeteria and kitchen on the ground floor and a parking lot with over 250 spaces. The cafeteria will also be a place for daily staff devotions and other functions. It will have seating for about 240 people.

Although staff can eat elsewhere, the cafeteria will improve efficiency by “keeping most people on the property for lunch and eating at the same time,” said Graham. “One of the problems when you have this many people at one location, when they all take off for lunch, they don’t all come back at the same time,” he said, adding that having a cafeteria at the Samaritan’s Purse headquarters building on Bamboo Road in Boone has been helpful.

‘Hands and feet of Jesus’

Graham said Wilkes has a great workforce. “We’re thankful for that…. We try to bring people in and train them up.” He cited Luther Harrison as a good example. “Luther was hired because we saw potential in him and now he runs all this down here and does a tremendous job…. If you can grow the leadership locally, we try not to bring people from outside.”

Harrison, vice president in charge of Samaritan’s Purse’s North American Ministries, introduced Graham during the ceremony and said he’s been based in North Wilkesboro with Samaritan’s Purse since 2009.

The North Wilkesboro-based North American Ministries, based in the Wilkes Office and Warehouse, includes U.S. disaster relief, mission aviation services, world medical mission, donor ministries, procurement, human resources, international communications technology and finance. Harrison said that through North American Ministries, over 18,000 volunteers “willing to be the hands and feet of Jesus” assisted people in the aftermath of natural disasters in 2018.

North American Ministries has seven tractor-trailers loaded with supplies and a warehouse of supplies at the Wilkes Office and Warehouse for aiding people after disasters. Graham said the ministry does this in the name of Jesus Christ to let people know that as a result of Christ’s death on the cross, they can profess their sins, be forgiven and have eternal life. “We want the world to know that there is a God. That He loves us and cares for us and sent His son to this earth for our sins. That’s why we do what we do.”

The Wilkes Office and Warehouse also houses all global logistics for Samaritan’s Purse, supporting work in 17 field offices and 66 mission hospitals around the world. Staff there pre-position relief supplies for international and domestic emergency responses, including an emergency field hospital.

Also at the event Friday were Graham’s wife, Jane, and the youngest of their four children, Edward Graham, as well as two of their 12 grandchildren.

Edward Graham graduated from West Point, spent 16 years in the military and had eight combat deployments. He left the military in December and is now is working for Samaritan’s Purse at the Wilkes Office and Warehouse.

In a prayer dedicating the building to Christ, Edward Graham said, “We pray that this building will be used as an instrument to win souls to Christ. And that wherever Samaritan’s Purse goes, that people know we’re there to love on them, but first and most importantly to teach them the good news of Jesus Christ. I pray for the staff who will work here, Lord, that they will be like-minded and encouraged and know that they are here to serve others in Jesus’ name.”

While introducing the Rev. Shannon Critcher, pastor of Millers Creek Baptist Church, to bless a lunch catered by Chick-fil-A, he called Critcher a good friend and added that the Critchers in Watauga County “are a proud family and good mountain people.” Critcher prayed that from out of the soil broken that day would rise something mighty in the name of God. “Thank you God for the gospel that makes us yours.” He prayed that those who are working in the building would “be a sending force for people to hear about Jesus.”

In the interview, Graham responded to speculation concerning possible sale of the Lowe’s Customer Service Center (former Wilkes Mall) in Wilkesboro to Samaritan’s Purse. “We don’t have any interest in that,” said Graham about the Lowe’s facility. “I’m trying to keep everything here (N.C. 268 East area) because if something’s out of sight, it’s out of mind. I’d rather build right here where we have a campus.”

Graham said he has no five-year plan. “All I know is that over the years God has blessed and everything we have here comes from God. I give him the credit and glory.”

He said the N.C. 268 East area is ideal for Samaritan’s Purse, partly because of its proximity to the Wilkes County Airport. The ministry’s 197 employees in Wilkes include about 30 at the Wilkes Airport, where the ministry owns a hangar, three airplanes and a helicopter and is the airport’s largest customer.

Graham, a pilot, said in the interview that Samaritan’s Purse is looking into acquiring larger business aircraft able to fly longer distances without refueling to better accommodate flights around the world. “Those type planes require just a little bit longer runway.”

Expanding the runway and taxiway “will help Samaritan’s Purse, but it will also bring in another level of aircraft into Wilkes, which will help attract some other businesses. It’s a great airport and the county has done a tremendous job in protecting the airport and having enough land around it for future growth. Somebody, sometime in history had a lot of forethought when they planned it,” Graham added.

Keith Elmore, chairman of the Wilkes County commissioners, said during a May 10 Wilkes Economic Development Corp. meeting about efforts to expand the runway, “I dare say it’s the top priority for the county right now.”

Samaritan’s Purse acquired the former Lowe’s Companies Inc. training facility, on a hill behind the North American Disaster Relief Ministries facility, in 2018 and is using it for training disaster relief volunteers who stay in Wilkes motels while here. With that facility and property for the Wilkes Ministry Center, Samaritan’s Purse has about 34 acres off N.C. 268 East in North Wilkesboro.

During a Wilkes Economic Development Corp. meeting on May 10, Samaritan’s Purse Chief Operating Officer Ron Wilcox said there are plans to have services of a health clinic with a doctor, physician’s assistant and nurse available for the ministry’s staff in Wilkes. This will start in Boone next month before it is available here.

North American Ministries currently has teams responding to flooding in Wayne County, Mich. More information about that is at spvolunteer.org.